Footnotes at the Foot of Europe 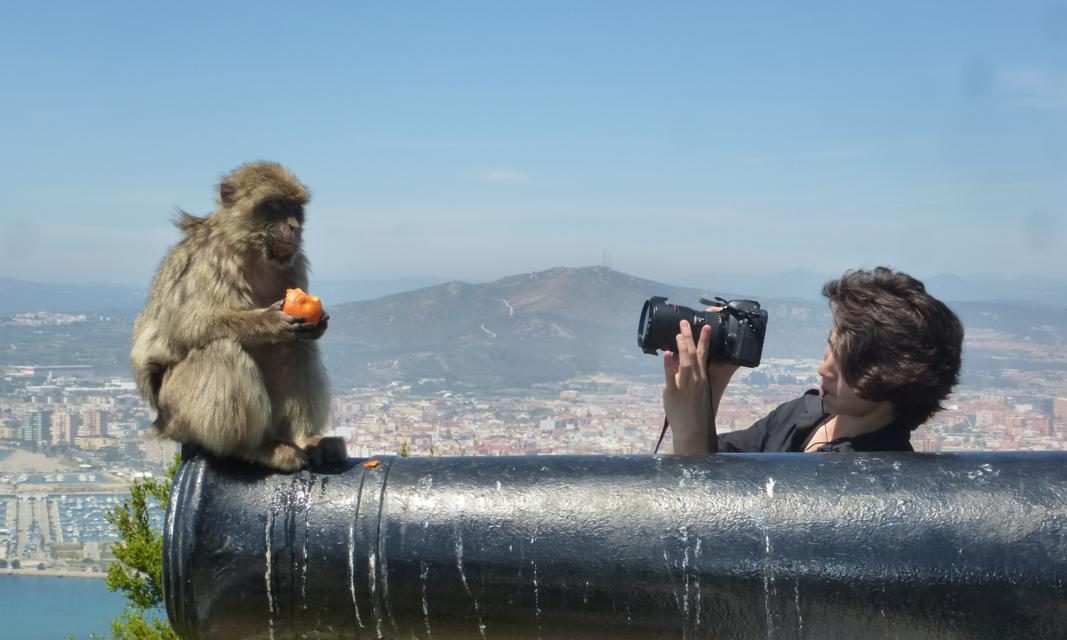 Spain and Portugal are exciting enough, but travel planners can go a step further by adding day trips to Gibraltar and the Islamic kingdom of Morocco. These offbeat inclusions can be as memorable as the big-time sights in Madrid, Seville, Granada and Barcelona.

The British colony of Gibraltar, a tiny peninsula attached to the southern coast of Spain, commands a strategic location on the narrow strait that connects the Mediterranean Sea and Atlantic Ocean—and separates Europe from Africa. This British Overseas Territory’s chief claim to fame is—you guessed it—the Rock of Gibraltar, a limestone mass that comprises much of its 2.6 square miles. In fact, Gibraltar is referred to as simply “The Rock.”

Fiercely loyal to Mother England, the community of 30,000 has its own stamps, currency, flag, radio and TV stations, newspaper, 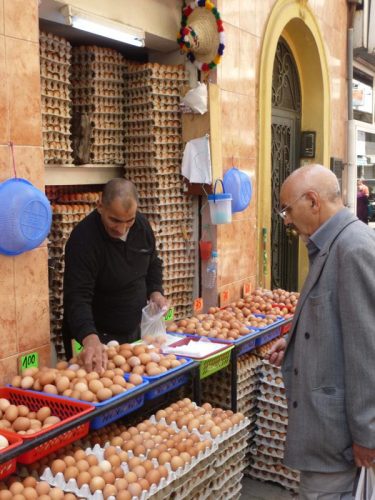 even airport and military garrison. The commercial, residential and harbor areas—squeezed between the Rock and the sea—occupy the flat, western side of the peninsula, facing the Bay of Gibraltar, Spanish border town of La Linea and port city of Algeciras, 12 miles away. The Rock, rising 1,400 feet to dwarf the town nestled at its foot, stretches the length of the eastern half, affording views of Morocco’s coast, about 15 miles across the Strait of Gibraltar.

Main Street, the pedestrianized shopping drag, branches off Casemates Square, offering everything from perfume and jewelry to linens, china, spirits and tobacco. (Shopping in Gibraltar is tax-free. Spanish citizens routinely cross the border to buy cigarettes and liquor at bargain prices.) Souvenir stores sell Union Jack knick-knacks and plush monkeys, a fun reminder of the semi-wild creatures that inhabit upper parts of the Rock. And who can resist a Rock of Gibraltar snow globe?

Many merchants are descended from families who came centuries ago from Spain, Portugal, Morocco and other Mediterranean lands. Gibraltarians speak English, Spanish and a curious mix of the two. Spaniards who commute into “Gib” account for part of the workforce.

At the post office on Main Street, stamp collectors make a beeline to the philatelic bureau. “Rock Stamps” actually contain bits of limestone from the mini-mountain. Other tourists drop in to mail postcards or pose next to the red pillar box adorned with a crown, the initials “ER” (for the Latin “Elizabeth Regina”) and words “Royal Mail.” Gibraltar’s stamps bear the likeness of Her Majesty Queen Elizabeth II.

The rugged speck of land jutting from the Spanish mainland has been in British hands for three centuries. In 1704 a joint Anglo-Dutch fleet took control of the Rock during the War of Spanish Succession, and Britain was granted possession through the 1713 Treaty of Utrecht. Spain didn’t make military attempts to regain it after the failure of the Great Siege of 1779-1783, during which the first tunnels were hewn from the Rock with gunpowder, sledgehammers and crowbars. 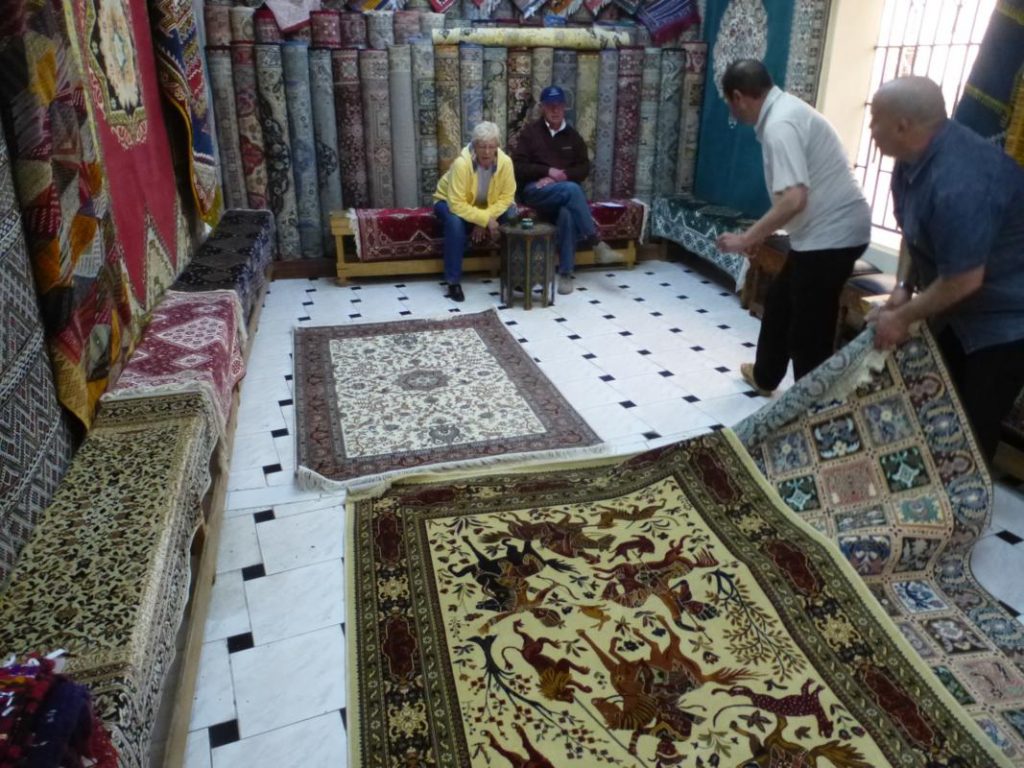 The issue of Gibraltarian sovereignty has always been a touchy subject between Great Britain and Spain. In 1969 the government of dictator Francisco Franco, infuriated by Britain granting Gibraltar full home rule and a referendum in which only 44 Gibraltarians chose to split from Britain, closed the Spain-Gibraltar border. The gates were reopened in 1985 under King Juan Carlos I as part of conditions for Spain joining the European Union.

The Gibraltar Museum, with excellent exhibits and a 15-minute video, is the most worthwhile tourist attraction in town, but the real sightseeing highlights are found on the upper parts of the Rock, a nature reserve. From town, a cable car delivers you to the observation terrace at the summit, which offers views in all directions. If the weather cooperates, you’ll see the iconic, steep-faced massif, the strait, the coast of North Africa and the stretch of Spanish shoreline known as the Costa del Sol. Look down the sheer precipices of the eastern side and spot the beach resort.

Competing with the panoramas for visitors’ attention are Gibraltar’s most famous residents—200 Barbary macaques, a species of tailless monkey originally from North Africa. You’ll see them waiting at the summit cable car station, but beware. They associate people with food and will snatch goodies from your pocket, plastic bag or purse—even the purse itself. Though the yellowish-gray “Barbary apes” seem friendly, they will bite if provoked, so visitors are advised not to touch them. If you’re patient, you can get close-up pictures of apes perched on rocks or railings, swinging from trees, munching on weeds or even sitting on a cannon.

The cool, dark Great Siege Tunnels, the best Rock attraction, has exhibits on Gibraltar’s history as a fortress strategically poised at the jaws of Europe and Africa. Some of the original cannons remain at the openings where they were pointed at Spanish invaders in the 1780s.

The shimmering white Moroccan city of Tangier, perched on the northwest tip of the African continent, may be only nine miles across the Strait of Gibraltar from Spain but seems worlds away with its heady mix of Arab, Berber and European cultures. (Berbers are the original inhabitants of Morocco.) Ferries to Tangier depart regularly from Tarifa and Algeciras, Spain. While it may pose a bit of culture shock, the place is non-threatening to Westerners in town for the day to add an exotic twist to their European vacations. A sense of mystery prevails. 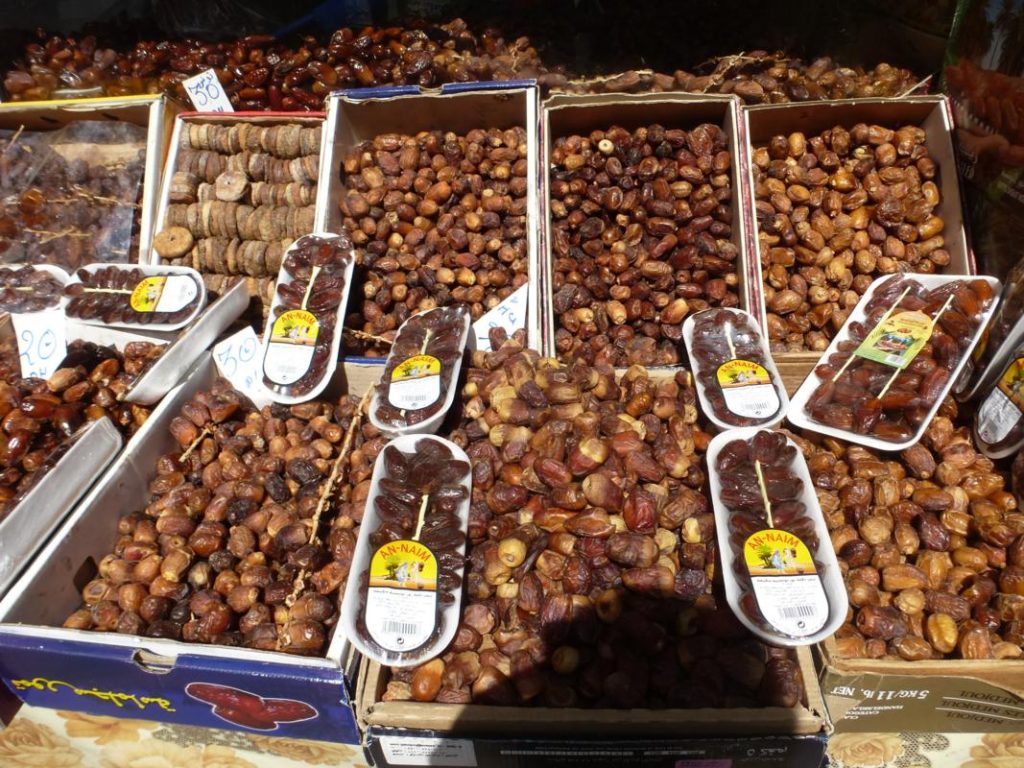 Narrow, twisting alleyways lined with hole-in-the-wall shops thread Tangier’s maze-like medina, the oldest part of town. A steady stream of people passes through the arched keyhole gateways, or babs, in the medieval walls encircling the medina. You’ll see women in caftans and headscarves (a few wearing veils over their faces), men enrobed in loose-fitting, hooded garments called jellabas and many locals in Western dress as well. Market vendors deal in everything from olives and eggs to figs and dates. Carts piled with oranges, lemons or mint leaves invite photos. Even the Moorish-style doorways, some painted in rich colors, keep cameras clicking.

Many shops in the souks (markets) cater to tourists, and the salesmen can be aggressive. Be prepared for greetings like: “Take a look, low price.” Or “Welcome to Africa.” These spirited merchants peddle carpets and caftans, copperware and ceramics. Leather goods include handbags, sandals and Moroccan babouches, pointed slippers open at the heel. Perhaps an engraved brass tray or silver teapot will catch your eye. Beware of “very old” items being passed off as antiques. Haggling over the price is expected and part of the fun. If you don’t speak Moroccan Arabic, try French, the second language. Most shopkeepers know some English. 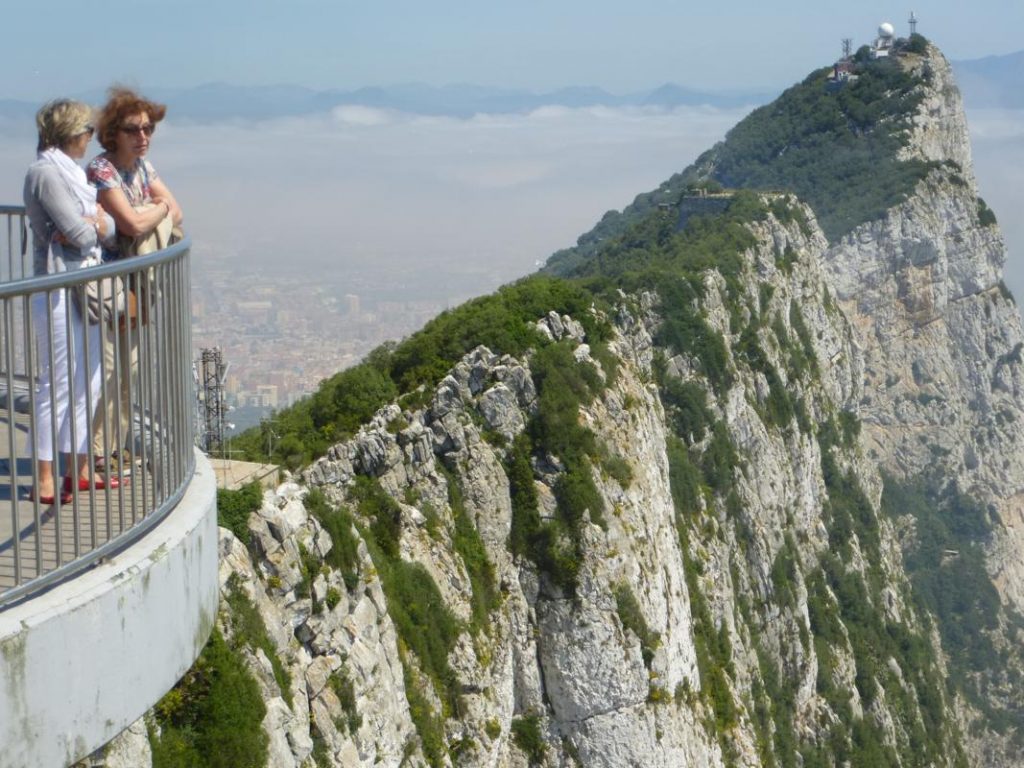 Points of interest in the medina include the American Legation, a museum that occupies an 18th-century mansion that served as a U.S. diplomatic residence for 140 years. Still American property, it is the only National Historic Landmark located abroad. The museum celebrates our long-held ties with Morocco, one of the first countries to recognize the United States as an independent nation. On display is a letter from George Washington thanking Sultan Moulay Suleyman for Morocco’s friendship.

Nearby is the Grand Mosque, the city’s largest, with its photogenic, white-and-green tile minaret. The interior of the 1685 landmark is off-limits to non-Muslims. Perhaps you’ll hear the muezzin singing the call to prayer from the minaret—it happens five times a day. When it’s time for a break from shopping and sightseeing, head to the Petit Socco (“Little Market”), a lively square where you can grab a ringside seat at an outdoor cafe and watch the world go by. Cafe Central is the perfect place to have a glass of mint tea, a mix of green tea, crushed mint leaves and sugar—lots of sugar. The drink plays a central role in Moroccan culture. While shopping for a carpet or other major purchase, for example, you may be offered a tea by the merchant. 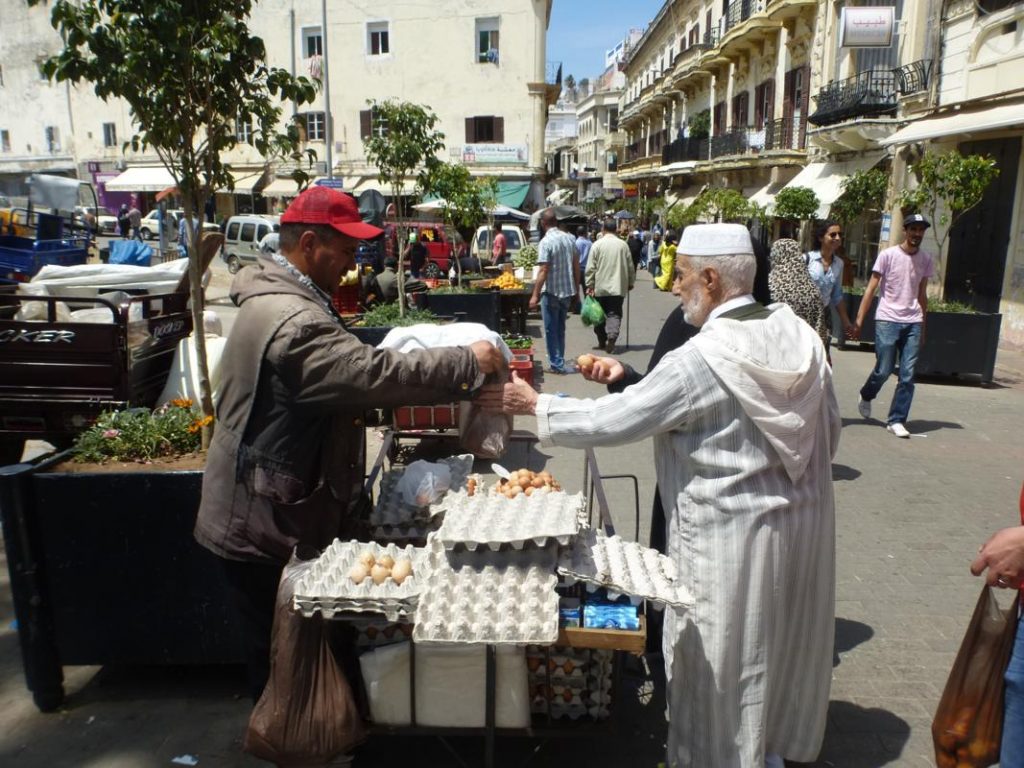 Directional signs in the Petit Socco point to the “Kasbah.” The very word has a magical ring to it, and a visit to Tangier’s medina is not complete without a trek up to the kasbah (fortress). Crowning the highest point of the medina, the kasbah held the residence of the sultan and his harem. The former palace and its impressive courtyard (dating from the 1700s and used by the sultan until 1912) makes a magnificent setting for the Kasbah Museum, a repository of Moroccan arts and antiquities. Postcard sellers, water vendors, dance troupes and snake tamers mingle with tourists on the square in front of the museum, soliciting money for pictures. A terrace on the crumbling ramparts, through a gate just off the square, affords panoramic views of the port, Strait of Gibraltar and, on clear days, the Spanish coast.

Your day in Tangier might include lunch at a traditional Moroccan restaurant like Hamadi. The menu features dishes like tagine (the classic stew of meat and vegetables in a tomato-onion sauce), harira (a vegetable soup), couscous and pastilla (shredded chicken, cinnamon and ground almonds in a phyllo-pastry pie).

Though a day in Tangier offers a mere taste of Morocco, consider your group lucky to have a few hours to sample this city straddling two worlds.