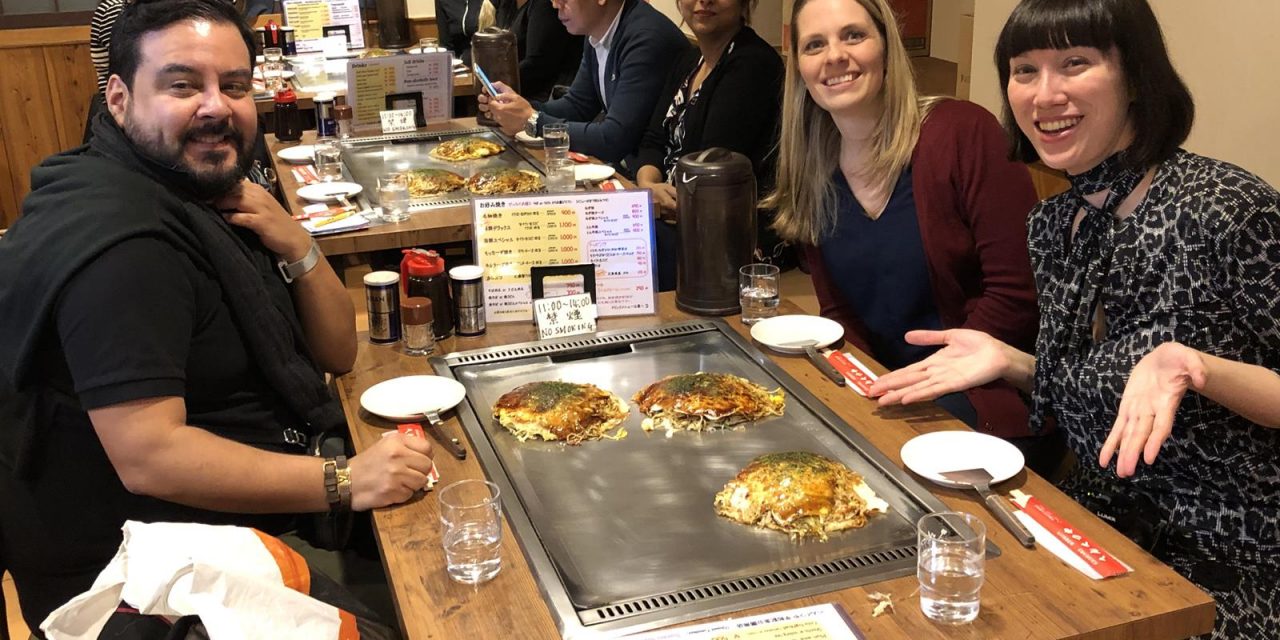 Now that word is a mouthful … and it was probably the most mouthwatering food I tasted on my recent trip to Japan with Goway Travel.

Our group’s weeklong trip to Tokyo, Kyoto and Hiroshima was filled with visits to temples, shrines, gardens and other traditional sights, but each day brought culinary adventures as well. I was surprised we were able to sample so many different dishes and experience so many cooking techniques in such a short amount of time. It wasn’t all rice bowls and sushi. We had everything from ramen noodles to Kobe beef to dozens of foods I’d never heard of—like okonomiyaki.

This popular dish, known as Hiroshima’s soul food, is served in some 2,000 restaurants in and around the city of a million-plus. Okonomiyaki first appeared after World War II as a cheap, filling food to satisfy the hunger of workers. (Hiroshima, of course, was the victim of the atom bomb in 1945, and the museum and monuments in Peace Memorial Park were the chief stops on our itinerary.) 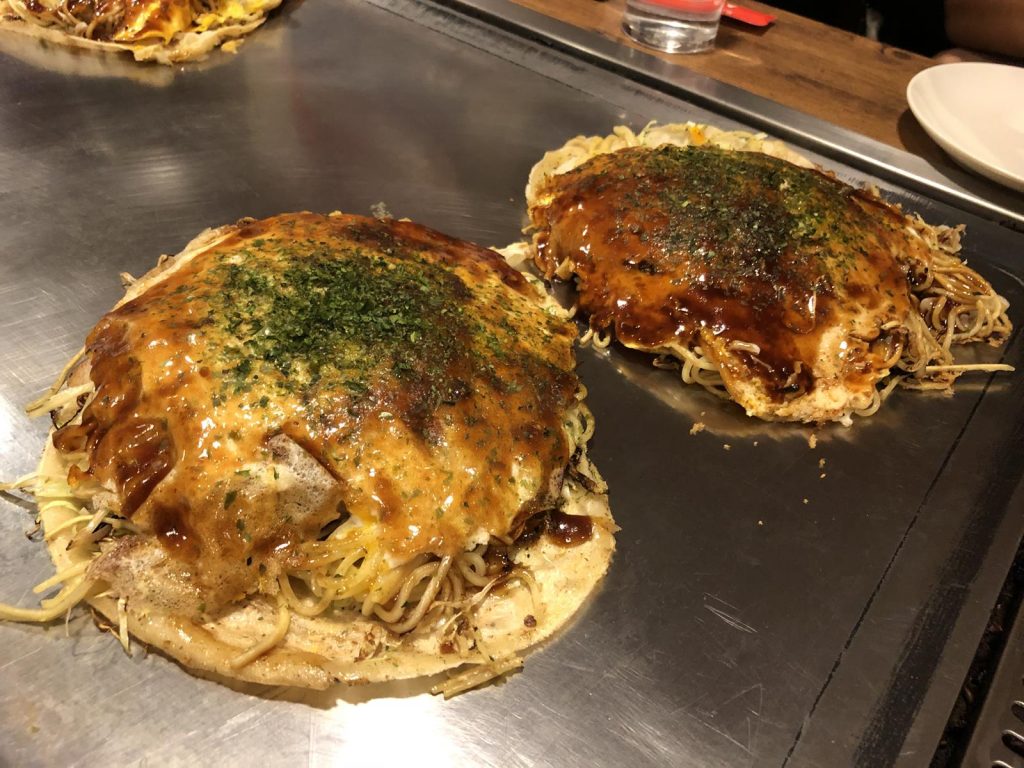 So what is okonomiyaki? There are many variations, but the standard version features pork, eggs and noodles. Made with a thin, crepe-like base layer and piled with ingredients, the humble-looking pancake is cooked on a long, flat griddle. Besides sliced pork belly, eggs and soba noodles (made from buckwheat flour), the patty contains dried green seaweed flakes, green onions, bean sprouts and cabbage. Some people add toppings such as oysters or squid. What made it extra delicious at our modest lunch restaurant was the house-brand sauce, a thick, sweetened Worcestershire-type sauce I liberally poured on, a condiment so good I had to buy a bottle to take home. We ate at tables just steps away from the counter, where patrons on stools had ringside seats to watch the chefs work their magic. 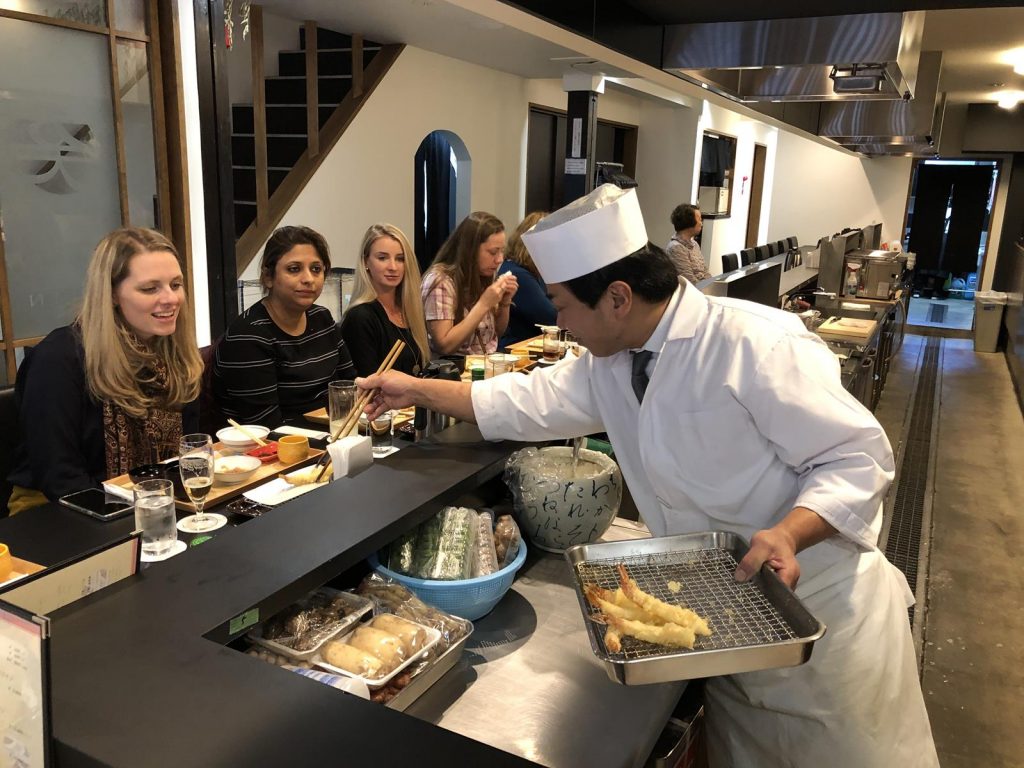 One day in Kyoto, our small Goway group bellied up to the long counter at and got a close-up look at the cook preparing our lightly battered treats. Served fresh from the vats of oil one at a time, the piping-hot morsels in our multi-course lunch included shrimp, eel, green pepper, mushroom, radish, pickled kelp and other tempura items that we dipped in bonito broth. A cup of miso (the ubiquitous soup made from a fermented soybean paste with rice, wheat or barley) was part of the meal, too. 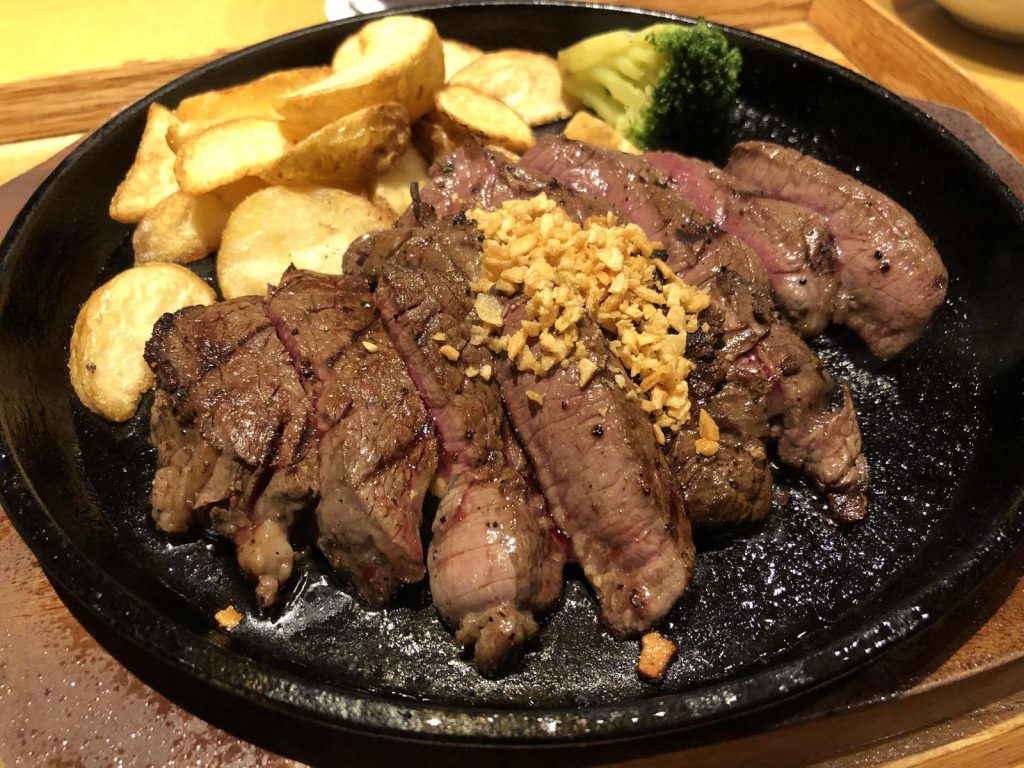 Other culinary highlights in Kyoto were dinner at a steakhouse for tender cuts of famed Kobe beef and a real spectacle the next night featuring kimono-clad waitresses and a geisha performance at Yoshido Sanso, a traditional Japanese inn, or ryokan. In a private room our group savored an exquisitely choreographed kaiseki meal consisting of small dishes presented one at a time, starting with an assortment of appetizers like salmon sushi and conger eel tofu. The parade of haute cuisine continued with red snapper and tuna sashimi, tempura (deep-fried shrimp, sweet potato and green pepper), grilled sablefish and fig with sesame sauce. We also enjoyed two soups—miso and crab meat tofu, and this was our chance to try sake, the Japanese alcoholic drink made from rice. The refined experience was topped off with a dessert of kiwi and orange mousse. 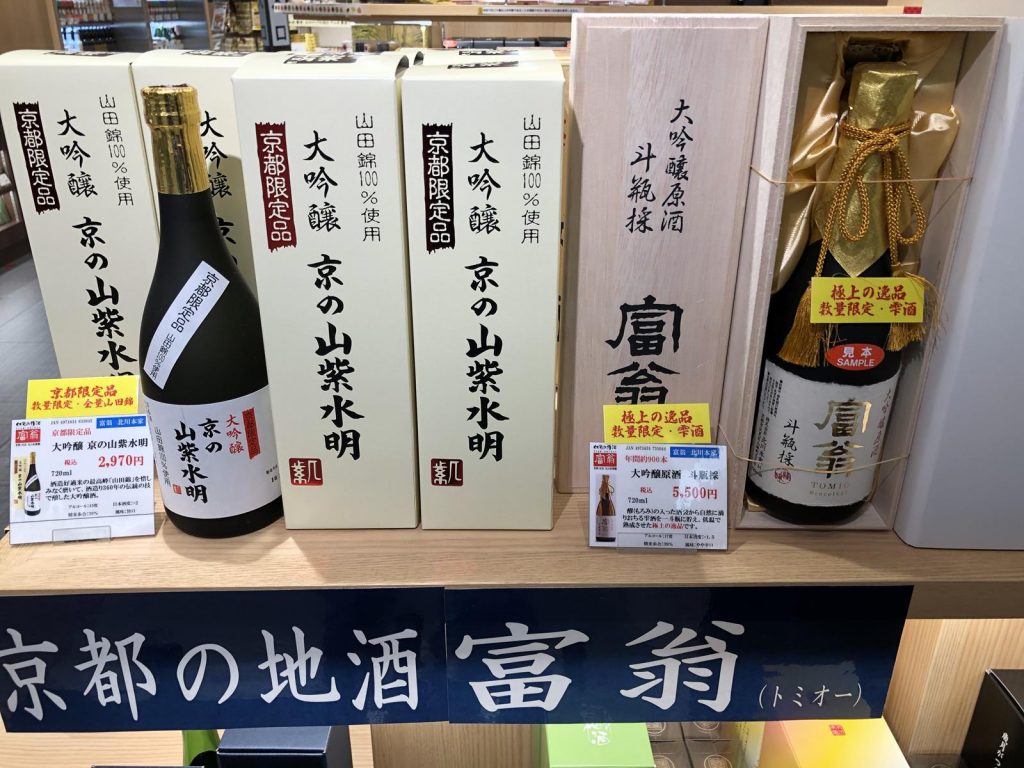 Seafood is a staple of Japanese cuisine, and what better place to indulge than Tokyo’s Tsukiji Outer Market, one of the biggest fish markets in the world. A tourist attraction as well as a locals’ hotspot, the market teems with vendors hawking their wares. Part of our group headed to a sushi restaurant, but I decided to wander, take photos and try something from a street stall. 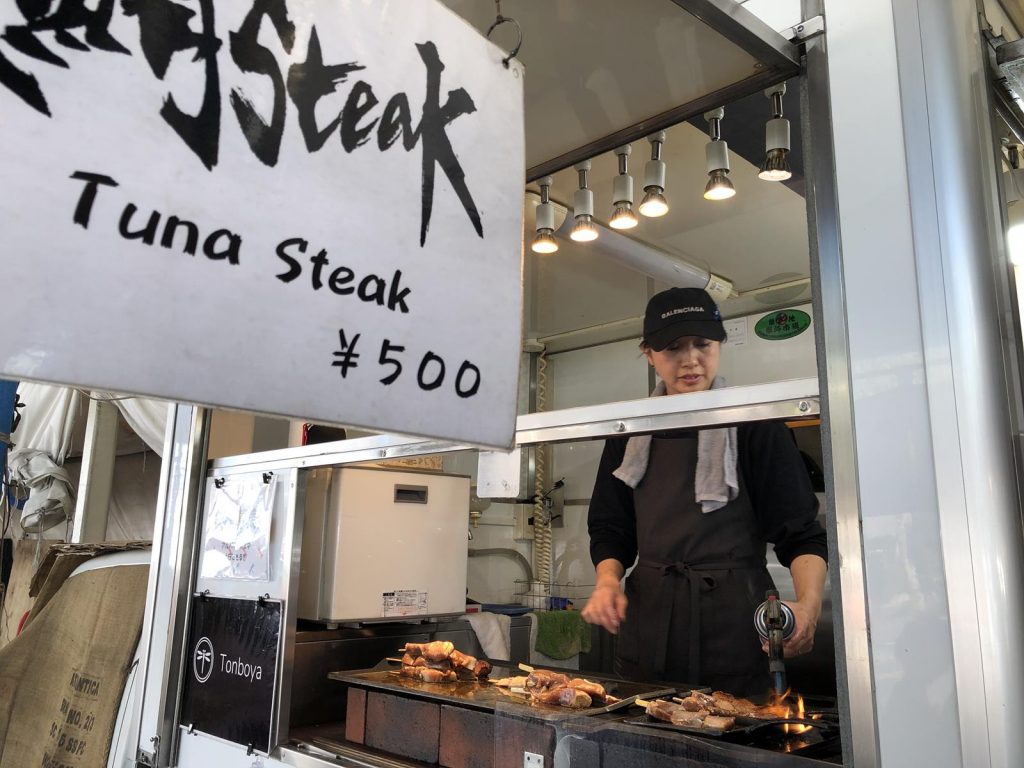 With more than 100 fishy businesses to choose from, I had plenty of lunch options. It was my first full day in Japan, and I was overwhelmed by the language and just the tempo of life in Tokyo. But the English words “Tuna Steak” on a food wagon caught my eye, so I went over and ordered a Coke and skewer of tuna nuggets for $5, waiting patiently while the woman seared the meat with a little gas torch. Eel skewers also seemed to be a big item at the market. 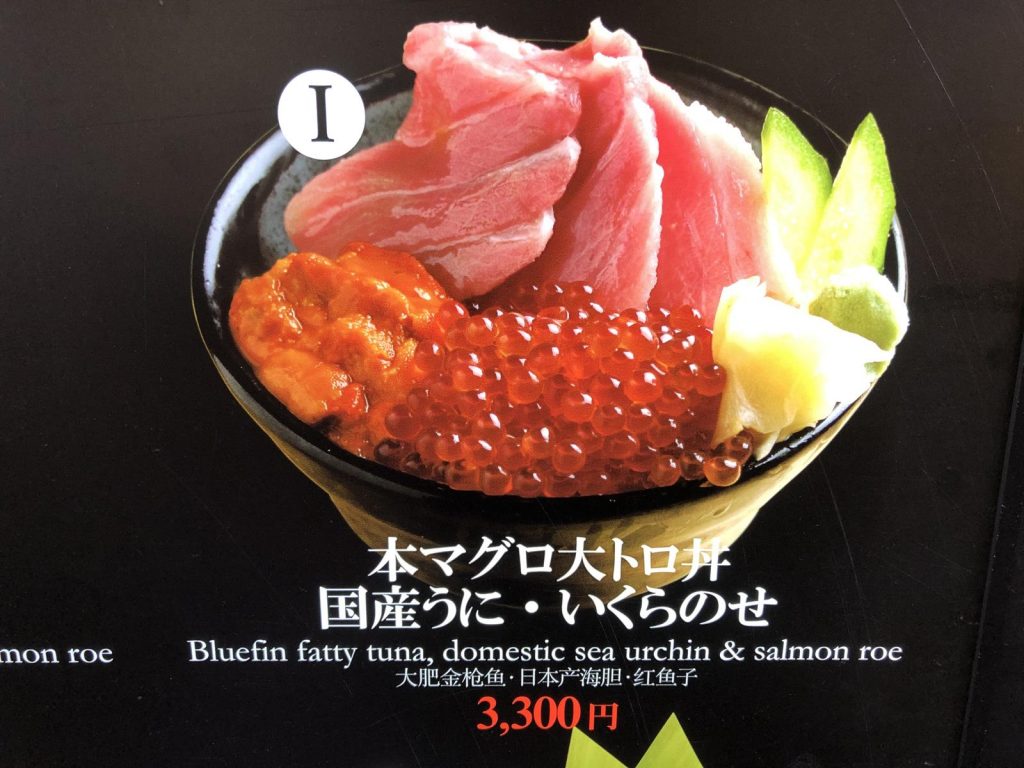 Colorful signs at Tsukiji Outer Market showed bowls and platters of assorted seafood (much of it raw), including salmon, salmon roe, sea urchin, eel, scallops, shrimp and snow crab. Fatty tuna (a prized delicacy), medium-fatty tuna and tuna sushi rolls also were part of many combos, most of which came with a bowl of rice and/or suimono (a clear soup). Another market favorite: the Japanese rolled omelet (tamagoyaki), a seasoned, neatly folded pillow of yellow delight served hot off the griddle. Yum.

I’m not a fan of shellfish, but Miyajima Island, a five-minute ferry ride from the outskirts of Hiroshima, was paradise for some in our Goway group. On Miyajima’s main shopping street, fellow travelers had a field day sampling the island’s famous oysters, mussels and clams after exploring the seaside Shinto shrine (a Japan icon) and hilltop Buddhist temple. Our guide, Goway Asia product manager Brittany Banks, got grilled oysters on a stick, while a travel consultant from Idaho savored a small plate of oysters covered with melted cheese. I found my own indulgence, snacking on maple leaf-shaped sweet buns (momiji-manijyu), another Hiroshima-Miyajima specialty. These little sponge cakes, served warm from a handheld griddle, typically are filled with red bean jam or chocolate. Other flavors include custard and cheesecake; sometimes the momiji-manijyu are deep-fried on a stick. Tip: Protect your food from the tame deer that roam the town and grab things from unsuspecting tourists. 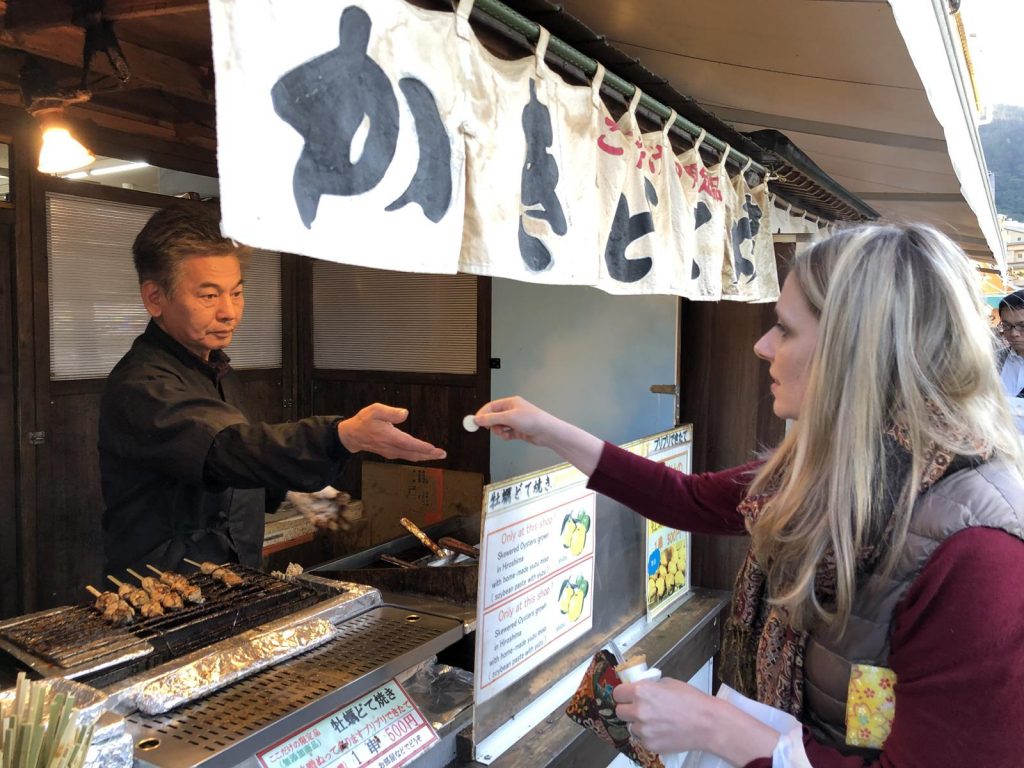 Tea has always been an important part of life in Japan, and our group gained a little insight at a tea ritual inside the teahouse at Kyoto’s Temple of the Golden Pavilion. Green tea, containing powerful antioxidants, is known for its health benefits, and matcha, a powdered green tea, is commonly used not only in tea ceremonies but is a popular flavor of ice cream and other sweets. There’s even a matcha Kit-Kat bar. Boxes of matcha-flavored confections make colorful gifts to bring back home. 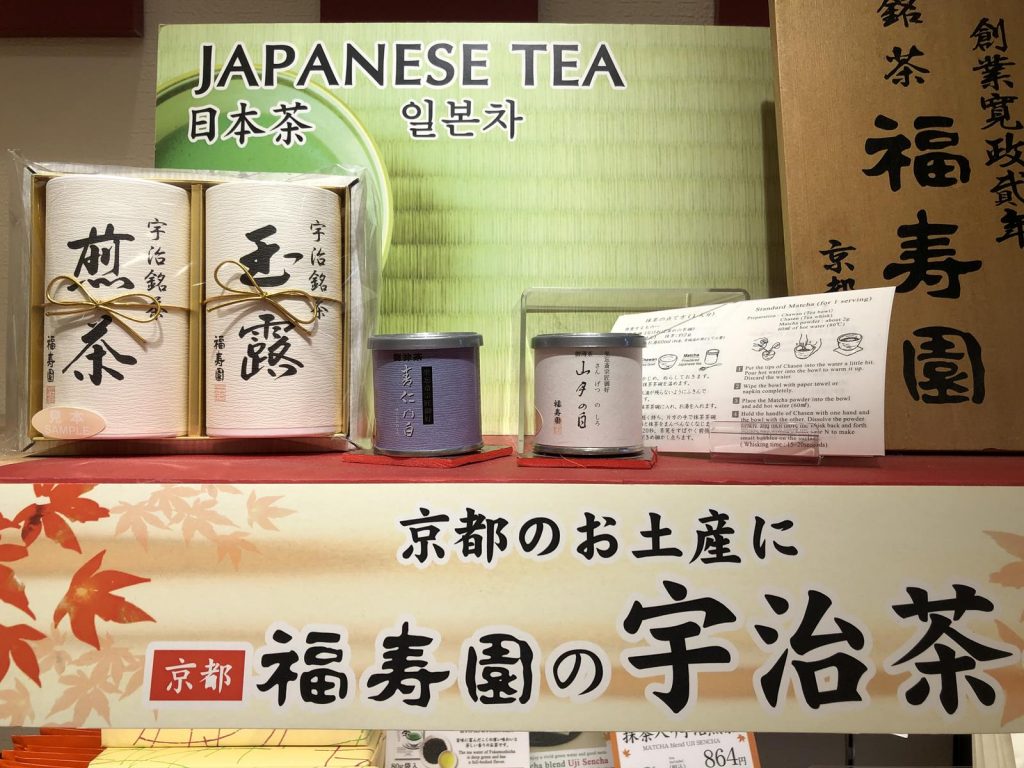 In Tokyo, our group had two cook-it-yourself encounters. At a casual barbecue restaurant we took off our shoes and slid onto benches surrounding tables equipped with a burner in the middle. With help from our guide, we ordered a la carte—slices of duck, chicken, wagyu beef, yams, other vegetables—and then cooked them over the hot coals, in some cases getting things a tad overdone.

In a restaurant that featured hot pot cuisine, we again did our own cooking—this time submersing noodles, tofu, bean sprouts, other vegetables, and thinly sliced raw beef, pork and chicken (chosen from a buffet at the front of the restaurant) into the steaming communal pots of either broth or soy milk before us. When the food was done, we took it out with communal chopsticks and into our individual bowls of rice. 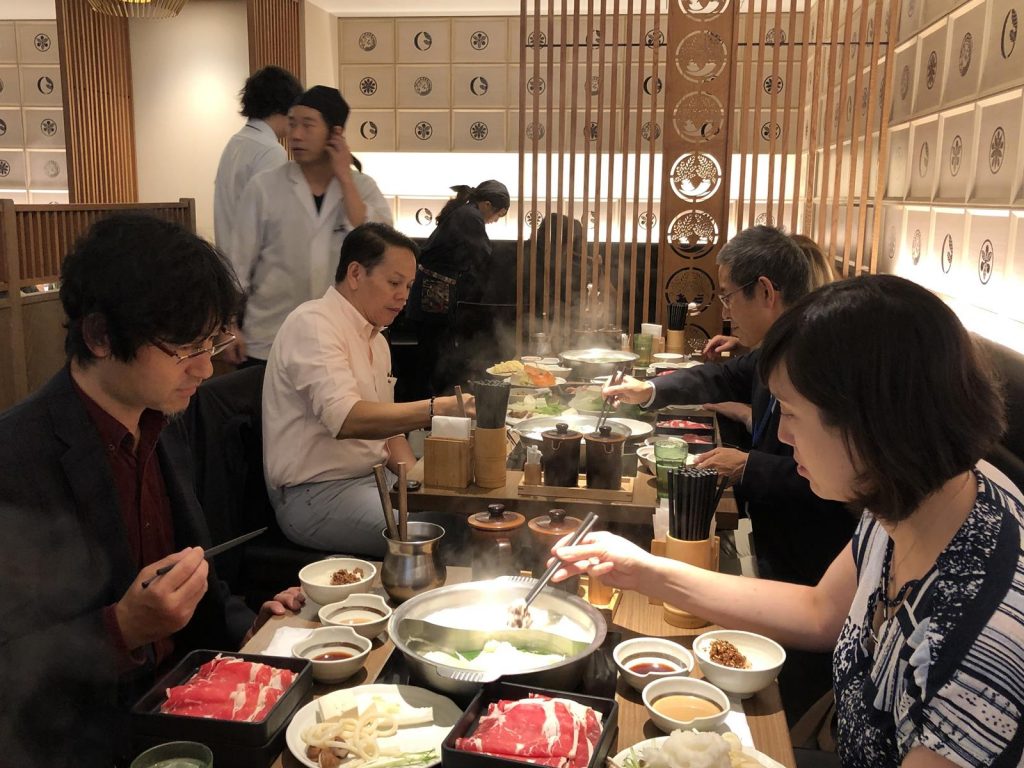 One way to sample the local cuisine is no more complicated than going to your hotel’s included breakfast buffet, which will offer a vast selection of both Japanese and Western foods. At the Shiba Park Hotel in Tokyo, brave ones among us tried slivers of sauteed burdock (a brown root vegetable), salted plum (definitely an acquired taste) and cups of natto (foul-smelling fermented soybeans whose bland taste can be enhanced with soy sauce or wasabi mustard). The buffet is also a good place to try miso soup and the Japanese rolled omelet.

For gourmet grazing, some of us used our free time in Tokyo’s fashionable Ginza district to invade the epicurean food halls on the lower levels of Mitsukoshi, the best-known department store. In a setting not unlike Harrods fabled food halls in London, you’ll find everything from sushi rolls and bento boxes to luscious pastries and decadent chocolates, even English teas, scones and clotted cream. Many top Tokyo restaurants have outlets at Mitsukoshi. Come hungry. 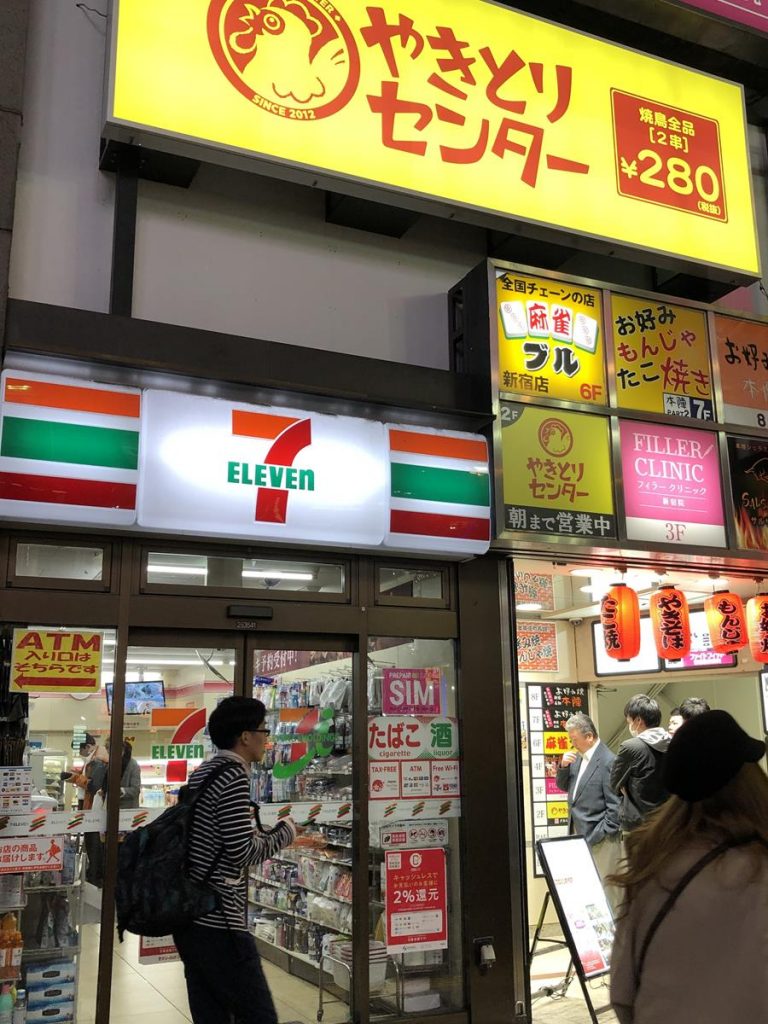 At the other end of the retail spectrum are the convenience stores that seem to pop up on every other block in Tokyo. The big three quick marts are 7-Eleven, Family Mart and Lawson. Our group stopped often at these places for snacks, basic necessities and cash from ATMs. Near the cash register are hot foods like packets of chicken nuggets or steamed buns filled with meat or a sweet bean paste. Some stores have tables for dining.

Also convenient are the vending machines on the streets and at tourist attractions, some of them artfully decorated. Besides chips, candy and soft drinks, they dispense beer, wine, and hot coffee and tea. (Japan has the world’s highest number of vending machines per capita.)

And then you have American fast food chains, including McDonald’s, Burger King, Wendy’s, Carl’s Jr. and KFC. A quirky Japanese tradition for many families is ordering buckets of KFC fried chicken for takeout at Christmastime. At KFC stores starting in November, you’ll see pictures and statues of Colonel Sanders in a Santa hat.

Though I would have done some of these food adventures on my own, having a guide with knowledge of Japanese cuisine, dining etiquette, language, culture and travel logistics made the journey hassle-free and a fun learning experience. Many restaurant menus have English translations, but many do not. Happily for those of us not so adept with chopsticks, forks are generally available.

Toronto-based Goway Travel, celebrating its 50th anniversary this year, not only offers Japan highlights tours with set itineraries but can tailor trips to suit the group. Culinary tourism is big these days, and Goway can customize a Japan experience based on food. An itinerary, for example, could include a meal in a Kyoto home, high-end whiskey sampling, a brewery tour or brewery museum, and a visit to Tokyo’s fish market with a sushi-making lesson at a restaurant there. A sports-centric tour could focus on baseball (Japan’s most popular sport), sumo wrestling (the national sport), soccer and martial arts. The U.S. is Goway’s biggest market.