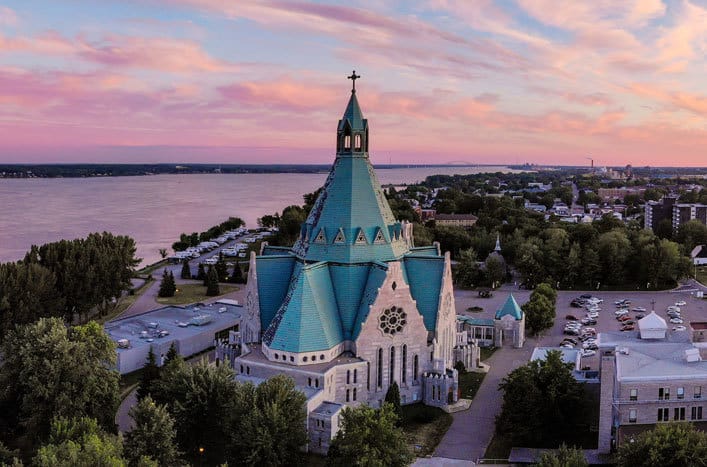 In the French-speaking province of Québec, religious history runs deep – from the metropolitan city of Montréal to the wooded shores of Lac-Bouchette. It is home to such accolades as the first cathedral built north of Mexico and the second oldest pilgrimage site in North America.

Québec’s religious sites are welcoming and accommodating to visitors, including student groups. Choirs and bands will find performance venues available. The shrines and their grounds are open to all denominations. If you are looking to plan a family vacation inspired by Québec’s national shrines, there is a variety of accommodations and cottages at the locations described here. These sacred sites are part of the tourism regions of Tourism Montréal, Tourism Mauricie, Québec City Tourism and Tourism Saguenay-Lac-Saint-Jean.

Perched high above the heart of Montréal, the largest shrine in the world dedicated to Saint Joseph has been an internationally renowned pilgrimage destination since 1904. Thanks to its beautiful assemblage of nature, music, art and history, Saint Joseph’s Oratory of Mount Royal is one of the most popular tourist attractions in Montréal. Those who have the chance to visit during the summer will be welcomed with vibrant displays of colors, shapes and textures that comprise the Oratory’s majestic landscaping. Take a stroll through the gardens, which offer the perfect place for mediation, relaxation and reflection.

As you will see upon arriving in Montréal, the Oratory maintains a strong physical presence, nestled in the mountainside with an imposing dome. Within this space, music continues to play an important role in opening up visitors to God’s presence, and the artistic and cultural heritage celebrated within the Oratory make this site an important stop on your heritage tour. Take in an organ concert, a carillon recital or the melodious voices of the boys’ choir – the Petits Chanteurs du Mont-Royal. And don’t miss paying a visit to the 200 nativity scenes that come from over 100 countries, in addition to the Oratory Museum, which will provide a deeper understanding of Québec’s religious heritage.

Our Lady of the Cape Shrine

As part of any religious heritage tour, you will want to include a visit to Canada’s National Shrine to Our Blessed Mother. Located in the gorgeous region of Maurice, the shrine, known as Our Lady of the Cape Shrine, is a beautiful octagonal building constructed of white granite on the shores of the St. Lawrence River and welcomes over 500,000 pilgrims annually. Outside of the shrine, visitors can take relaxing strolls on trails located and visit Sainte-Marie Lake the Rosary Bridge. The bridge commemorates the ice bridge that formed in 1879 and allowed for the transportation of stones needed to construct the new church.

Visitors can also stop at the chapel, built in 1714, which has incredible stained-glass windows and a magnificent Casavant organ that is one of the largest in Canada. Our Lady of the Cape Shrine has for centuries struck visitors with its calming presence and the sense of peace found in its gardens and inner passageways. In the Basilica, prepare to be wowed by the architectural mastery that allows for unobstructed views – with no columns or pillars – for all 1,600 visitors that the room accommodates.

Just 20 minutes outside the quaint center of Québec City, the Shrine of Sainte-Anne-de-Beaupré is the

second oldest pilgrimage site in North America and welcomes nearly one million visitors annually. There is much to explore both in the gardens and beautiful outdoor areas; inside, visitors are taken on a spiritual journey enhanced by paintings, mosaics, stained-glass windows and sculptures.

Take pause at the serene fountain in front of the chapel that dates back to the 1880s; it is fed by a source originating from the nearby hillside. See Saint Anne in all her glory in the bas-relief of the façade, with the Angel of the Pilgrim watching over the followers who come to the shrine each year. And, if you look toward the pinnacle between the two bell towers, you will see a statue of Saint Anne, miraculously salvaged from a fire that tore through the first basilica in 1922.

A visit to the heart of Old Québec naturally leads visitors, whether for touristic or religious purposes, to the Basilica-Cathedral Notre-Dame de Québec. This church is now a Historical Monument of Québec and Canada and is on the UNESCO World Heritage List. Of immense importance to the Catholic faith, it is the first cathedral to be built north of Mexico and is considered to be an ancestor of all the Catholic parishes that have come after it in Canada and the United States.

In fact, due to Notre-Dame de Québec’s size and scope, it played an important role in keeping French alive in North America, has been a part of the cultural changes that have shaped society over the span of centuries and is even referred to as the “Rome” of the New World. The basilica, which has received many gifts from popes due to its significance, was also provided with the privilege of building a Holy Door, as authorized by the Vatican. See this door, which is a symbol of communion with the universal church, and pay a visit to the Jubilee Garden and take time to reflect in the peaceful surroundings.

Those who seek a religious experience beyond the bustle of Montréal and Québec City can journey to the wooded grounds off the shores of Lac-Bouchette and explore the peace of Ermitage Saint-Antoine de Lac-Bouchette. More than just a religious retreat, this 110-year-old shrine is also a favorite among seasoned travelers, who enjoy the variety of lodgings such as chalets, hotel rooms and campgrounds, along with a restaurant, guided tours, heritage buildings and walking trails.

For those who want to combine their religious experience with the surrounding natural beauty, the famous Kapatakan Trail is a 133-mile pilgrimage trail, similar to that of the world-renowned Camino de Santiago in Spain. Year-round activities encourage visitors to connect with their inner selves and those around them. The grounds of Ermitage Saint-Antoine de Lac-Bouchette, from the first blooms of spring to the first snowfall, are magnificent all year, adding to the serene atmosphere.