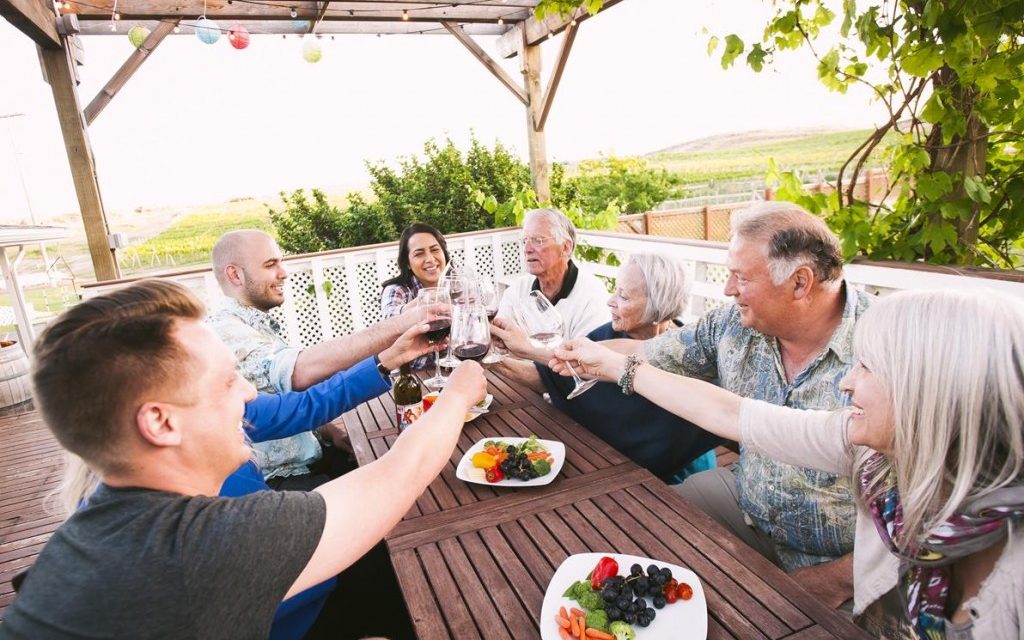 When it comes to culinary prowess, five cities in Washington and Oregon really step up to the plate and dish up the best food and drink the region has to offer.

Most people associate the Pacific Northwest with two things—beautiful scenery and rain. While the weather is often overstated, the natural settings and faithful watering of the farmland help to make the region a foodie’s paradise.

From downtown farmers’ markets and food carts to countryside farm to table hotspots and hidden vineyards, there is something for every hungry and thirsty group. It’s never hard to find good food and drink—what’s hard is finding a restaurant, winery or brewpub with a bad view. Your group will leave a Washington or Oregon food tour with plenty of great pictures and most likely a few extra pounds to remember the trip by.

While everywhere in the Pacific Northwest seems to be serving something good, five cities stand out for group tours.

With more than 600 food carts, the streets of Portland are filled with plenty of competing smells. While other cities’ food carts often move around, Portland’s street-side snack shops are congregated into stationary “pods.” There are eight large pods of food carts in Portland, and many other smaller pods and individual carts sprinkled throughout the city. Walking tours, such as “Flavor Street” and “Forktown Food Tours,” allow groups to visit several pods and sample the best of Portland’s food carts in just a couple of hours.

While many cities crown themselves as the “Beer Capital of the World,” Portland actually has a right to the title. The 53 breweries within the city limits give Portland more than any other city on earth. Popular stops for groups include the BridgePort Brewing Company and Widmer Brothers Brewing Company, both of which offer tours and tasting trays. While no longer a brewery, Henry’s Tavern on 12th Avenue pays homage to one of Portland’s beer legends, Henry Weinhard, by using his original brewery as a restaurant and bar.

Portland is also well out in front of the “Brew and View” trend, already with six movie theaters that offer local brews, wine and pub food. Each theater has its own personality that fits with the types of movies, food and drinks that it serves.

Farmers’ markets don’t often become famous, but Pike Place Market has cemented itself as one of the most well-known in the world. This nine-acre market operates 362 days a year with seafood and produce stands on the famous cobblestone street during the summer months and within the arcade during the winter. “Chefs on the Cobblestone” cooking demonstrations run during the summer and always draw a crowd. Camera-toting visitors congregate at the Pike Place Fish Market to wait for “flying fish.” Well, the fish may not have wings, but when someone orders a whole king salmon or another variety of fish, a fishmonger in slick coveralls and rubber boots removes it from the mound of ice and tosses it to the counter attendant, calling out the order in a time-honored ritual.

The market is also home to the original Starbucks Coffee shop. The multi-billion- dollar company now has more than 5,000 franchises in over 50 countries, but it all started in 1971 on 1st and Pike in Seattle. The inside of the coffee shop has been remodeled, but the outside looks the same as it did when it first opened.

Miner’s Landing at Pier 57 is a popular dining spot for locals and tourists alike. Once an integral part of shipping gold during the gold rush, the pier is now home to three seafood restaurants and a bakery, all with outdoor seating and great views of Puget Sound and the Seattle skyline. For scenic views, there isn’t a better spot to dine than SkyCity atop Seattle’s most iconic landmark, the Space Needle.

Spokane was originally settled as a trading post for animal furs, but today the city is more focused on the meat. With the fertile Spokane Valley directly to the east, Spokane’s restaurants don’t have to look far for quality meat and fresh produce.

Though inland, Spokane still offers great water-view dining on the shores of the Spokane River. Anthony’s is a seafood fixture in Washington, and its location overlooking the Spokane Falls is a local favorite. Fresh fish arrives at Anthony’s daily, including Alaskan silver salmon and ahi.

Clinkerdagger’s patio is right over the edge of the river and features views of the city skyline. Perfect land-and-sea combos include grilled smoked sirloin and jumbo prawns, rock salt-roasted prime rib and grilled salmon, and char-grilled filet mignon and lobster tail. If kicking back on a riverside lawn with a craft brew sounds good for your group, try NoLi Brewhouse, which specializes in hoppy IPAs and sweet ales.

Venture outside the city for a taste, literally, of the country. Walters’ Fruit Ranch offers tours of its orchards during the summer and fall. The sprawling ranch grows strawberries, cherries, raspberries, tomatoes, apricots, peaches, nectarines, corn, apples, pumpkins and squash, so something is always in season. Nestled between the snaking Lake Roosevelt and the mountains, Whitestone Vineyards and Winery delivers views as bold as its wine. Enjoy the tasting room, sprawl out on the lawn and listen to live music or tour the barreling facility, all with one—or a few—glasses of award-winning wine.

Eugene has always been an adventure tourism hotbed, and as a city constantly bombarded by mountain climbers, whitewater rafters and sandboarders, boring food would never fly. Eugene restaurants often have European and Asian influences that utilize the fruits, vegetables and nuts that thrive in the lush Willamette Valley farmland.

The bus ride into the city will no doubt pass a smattering of farmstands, which offer produce straight from the fields behind them. Many local farms let groups do their own picking of cherries, pears, apples, peaches, strawberries, tomatoes, plums, squash, pumpkins and even nuts.

Adventure seekers and food tours alike are always satisfied by Eugene’s offering of local spirits. No Oregon city is complete without a few craft breweries, and Eugene boasts 20 of its own. In addition, downtown wine bars feature wines from wineries throughout Willamette Valley.

Yakima and the surrounding Yakima Valley live up to everything you would expect from Washington’s wine country. Located in the heart of the state, Yakima Valley is home to over 100 wineries, 13,000 acres of vineyards and 300 days of sunshine a year. Mountains on each side of the river valley offer picturesque views while strolling the vineyards, relaxing in a tasting room or enjoying an outdoor concert. Yakima Valley veterans have developed numerous tasting routes, which groups can follow to get a little taste of all the valley has to offer.

While mostly known for its wine, more than 75 percent of the hops grown in the United States come from Yakima Valley. In town groups can visit a number of craft breweries and cideries that get their ingredients straight from the valley, as well as tour the American Hop Museum. The quaint downtown has its own set of wine tasting rooms, along with plenty of boutiques, galleries and restaurants.

Even with so many vineyards and hops farms, Yakima Valley still somehow manages to be littered with u-pick farms, orchards and farmers’ markets, just like the rest of the great Pacific Northwest.