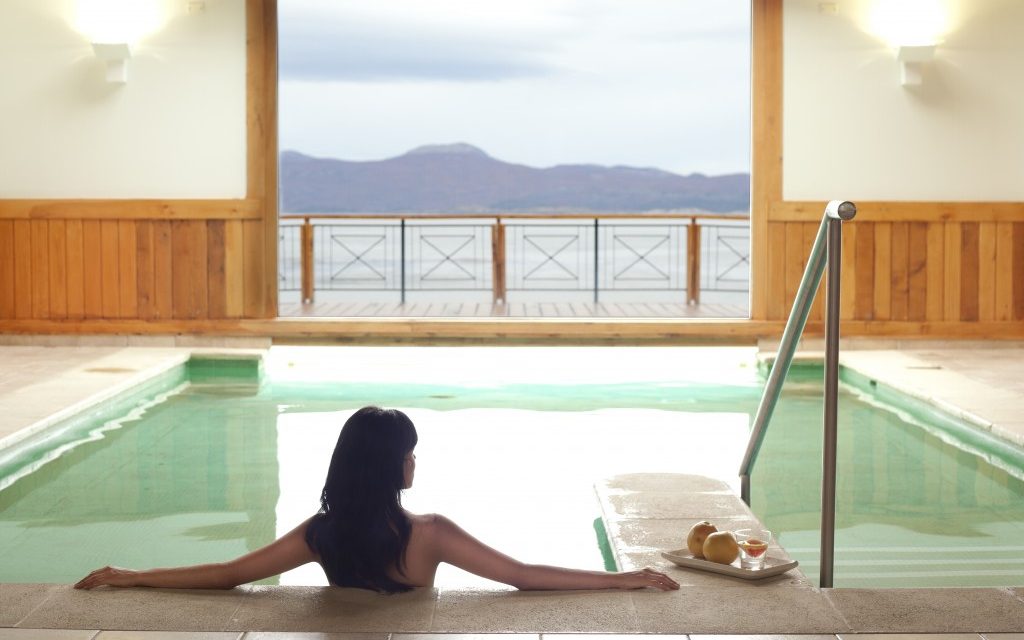 When it comes to top-flight accommodations, Los Cauquenes Resort & Spa sets the standard at the bottom of the world.

The exclusive, 54-room property is the choice of many North Americans who find themselves in Ushuaia, Argentina, the southernmost city on the planet. Ensconced beyond the guardhouse of a gated community about 15 minutes from downtown, Los Cauquenes is a rustic, yet luxurious hangout that pampers travelers on their way to, or just back from, cruises in Patagonia and Antarctica—and other adventurers exploring the wilds of southern Argentina and neighboring Chile. 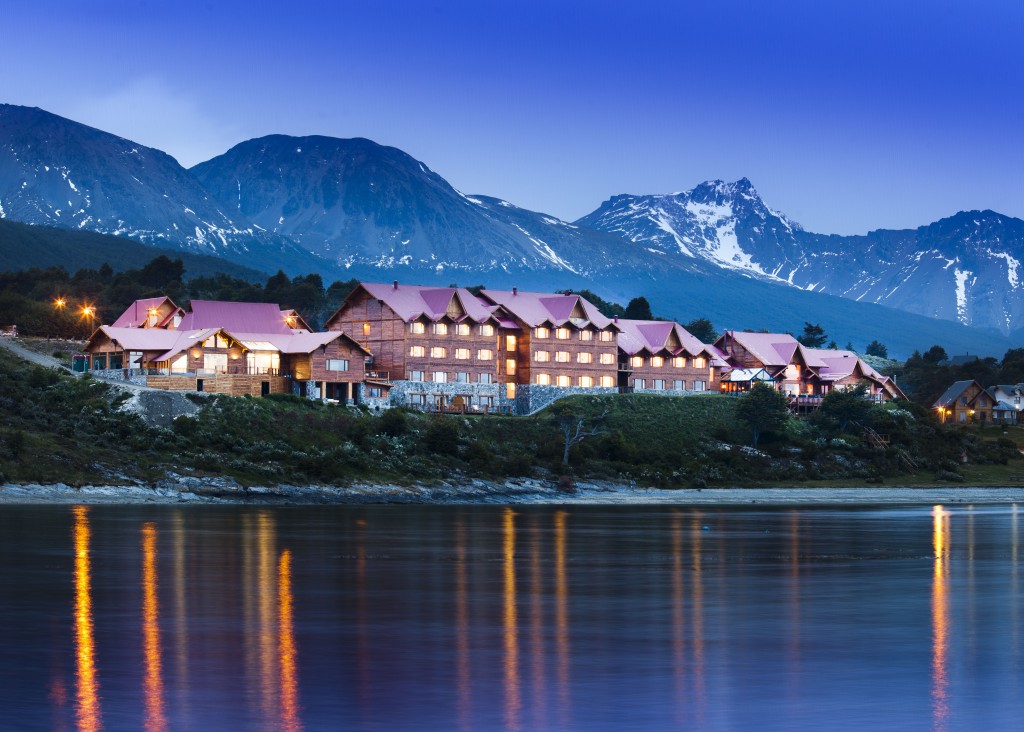 Los Cauquenes was my plush home for two nights after a five-day Patagonia/Cape Horn cruise on the Stella Australis that took me from Punta Arenas, Chile to Ushuaia, a port city of 60,000 nestled beneath the snow-capped peaks at the end of the 4,000-mile-long Andes chain. The lodge seemed especially cozy after a late-spring snowfall in early December dusted the treetops and stony beach outside my room. What a delight to soak in the outdoor hot tub of the spa’s indoor-outdoor pool, have a drink by the fireplace in the bar and take in the snowy scene from an easy chair in the glass-enclosed Winter Garden off the lobby. I also liked the lofty, beamed ceiling of my second-floor room, a comfortable nest that afforded views of the Beagle Channel, a 130-mile-long strait in the Tierra del Fuego archipelago.

A member of Small Luxury Hotels of the World, Los Cauquenes (Spanish for “upland geese” and pronounced “cow-KAY-nes”) is a two-story wood-and-stone building topped with a roof of red corrugated metal. Though I indulged in the usual amenities found at a five-star resort—things like plush robes and fresh-squeezed orange juice—it was the high level of service that made my stay memorable. From the front desk to the concierge to the bar and restaurant servers, the youthful staff was friendly, spoke excellent English and seemed to anticipate every need.

For dinner the first night I chose Reinamora Restaurant’s intimate bar area, where all six tables on the enclosed balcony overlook the water. Rain was pelting the windows, but I enjoyed the views of the rocky islands and watching birds dive into the waves. I also had a nice view of the bar’s fireplace, just steps away.

King crab is the region’s signature culinary specialty, and Reinamora’s menu offers a number of ways to sample it. Appetizers include king crab soup and Caesar salad with king crab. One of the entrees is king crab tagliatelle. Lamb, of course, is a staple throughout Argentina, so I eschewed the seafood and ordered the Tierra del Fuego lamb stew in a peppery Malbec wine sauce. The menu also listed entrees like rib-eye steak, salmon in almond croute, and grilled veal tenderloin with bacon and mushroom sauce. I topped off the meal with the Dulce de Leche Volcano—a luscious chocolate cake oozing with hot caramel sauce and served with calafate (a local berry) ice cream. The dining room manager also let me try Cheese and Jam, a spongy blend of cheese mousse and sweet potato jam ice cream. I got another sweet fix at breakfast in the high-ceilinged dining room, where the sumptuous buffet included alfadores—round sandwich cookies filled with jam or dulce de leche. 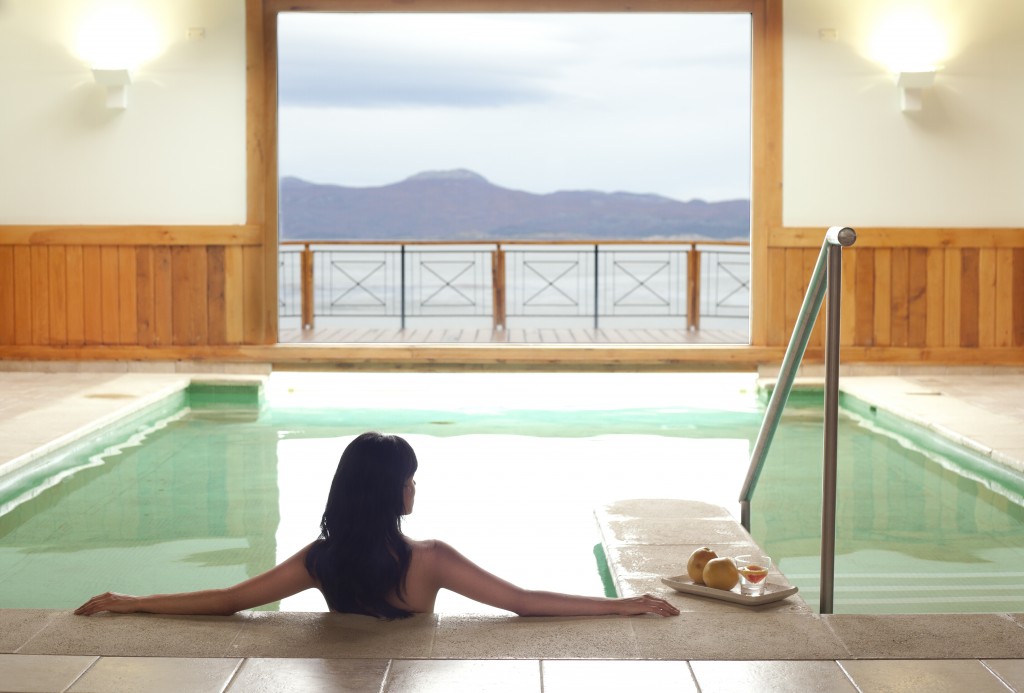 The resort’s Spa at the End of the World meets the highest international standards, offering 24 kinds of treatments and massages with natural products. In addition to the swimming pool, there are saunas and a fitness room.

Some packages at the resort offer exclusive “Experiences” for guests, such as a Ushuaia city tour, glacier trek, hiking in nearby Tierra del Fuego National Park, kayaking on the Beagle Channel, sailing on the resort’s own boat to see penguins on Martillo Island, and a scenic ride through the national park on the End of the World Train. In another option, entitled “Southern Cooking,” the restaurant chefs present a two-hour course during which they prepare Patagonian recipes featuring king crab, fish and lamb.

Los Cauquenes makes it easy for guests to explore the center of Ushuaia with convenient shuttle service throughout the day and night. Main attractions in town include the Maritime & Prison Museum of Ushuaia, which occupies a former prison built in 1902 and provides an excellent introduction to regional history through ship models, artifacts, dioramas and videos.

By the waterfront, travelers can go to the municipal tourist office and have their passport stamped “Ushuaia, Argentina, The Southernmost City in the World.” Nearby, another must is posing next to the painted wooden sign inscribed “Ushuaia: Fin del Mundo,” or “End of the World.” Lined up near the cruise terminal are huts of tour operators offering catamaran excursions out into the Beagle Channel. These boat trips spotlight marine life on and around the nearby islands. You’ll likely see albatrosses, cormorants, petrels, terns, skuas and other sea birds, and perhaps dolphins and minke whales. The real favorites are Alice Island’s sea lions and the Magellanic penguin colony on Martillo Island.

In this wild, isolated corner of the world, it’s comforting to know that travelers have a first-rate place to rest their heads. Even the most discerning travelers will find they’re looking for at Los Cauquenes Resort & Spa.