Walk down the narrow, cobbled streets flanked by centuries-old stone buildings and you’re magically transported to Europe. Outdoor cafes, flag-festooned souvenir shops, signs in French and people greeting each other with kisses on the cheek conjure up images of France or Belgium. 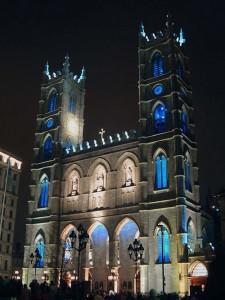 Old Montreal, a revitalized port district, is the touristic heart of this island city in the St. Lawrence River. Not far north of New York and Vermont, Montreal (pop. 3.9 million) is the largest French-speaking city outside of France and a close-to-home getaway for Americans seeking a little joie de vivre. It’s culturally different yet familiar; residents know English as well as French.

Much of the history that tourists experience in Old Montreal revolves around the early days of the Catholic Church, which played a dominant role in the settling of French Canada. In addition to sites from colonial days, faith-themed itineraries in Montreal include places of worship and pilgrimage dating from the 20th century.