Explore These Indiana State Parks on Your Next Group Trip 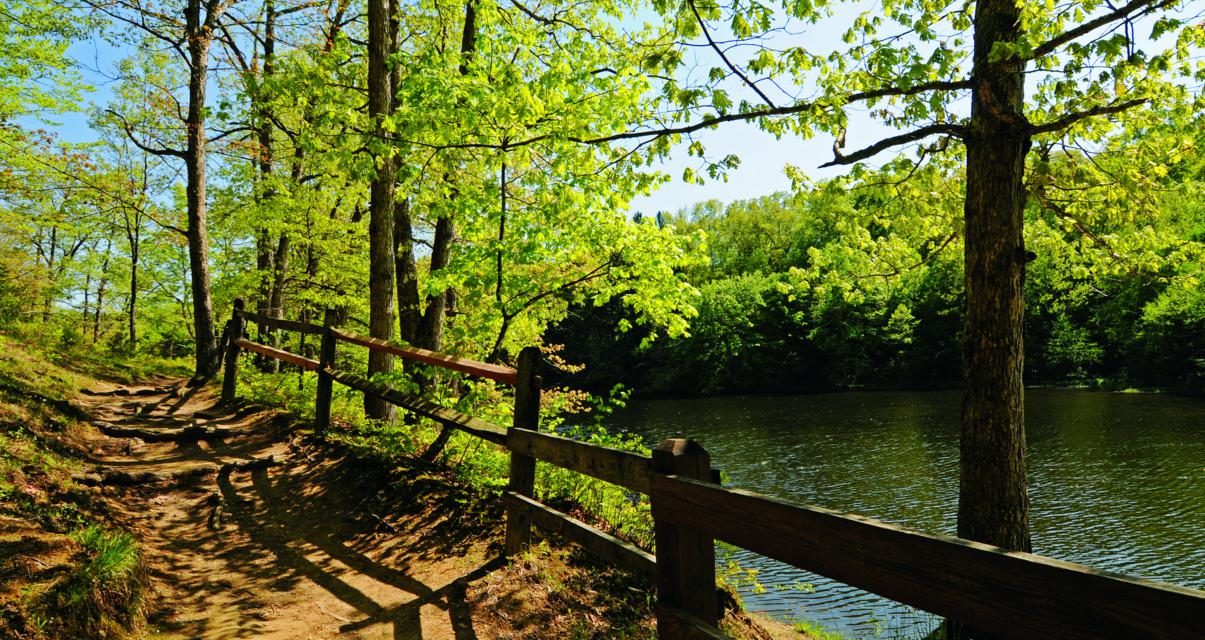 What better way to get away from it all than hiking beside a creek in a ferny canyon where the only sounds are birds, rustling leaves and gurgling water. Your destination at trail’s end might be a cave or waterfall, but as you stop to enjoy the vegetation, the wildlife and the views, you appreciate that getting there is half the fun. Under leafy canopies of towering hardwoods, everyday distractions and worries seem worlds away. At Indiana state parks, nature rules.

In some parks, your travelers can admire Mother Nature’s majesty from a rocking chair on the porch of a rustic inn. Perfect for group getaways, these cozy hostelries come with restaurants and other modern hotel amenities. Ranger-led talks and hikes, not to mention nature centers that spotlight local flora and fauna, also appeal to group tour planners. Many parks boast lakes, swimming pools and horseback riding, while several parks have historical sites. All of these refuges offer large grassy areas to play and picnic.

From the sandy shores of Lake Michigan to the wooded bluffs on the Ohio River, Indiana is blessed with state parks rich in natural treasures. Though some out-of-staters picture Indiana as flat farmland stretching to the horizon, much of it actually is hilly, especially the southern half. Indeed, the most scenic parks are nestled in southern Indiana, where pastures and cornfields give way to thick forests, rocky ridges and rugged canyons.

With more than 20 miles of roads, Brown County State Park is by far Indiana’s largest state park—and its most visited. Located near the artsy town of Nashville, an hour south of Indianapolis, the park is nationally known as a fall foliage mecca. For many visitors, it’s all about the vistas—tree covered landscapes as far as the eye can see.

Abe Martin Lodge, whose original section was built in 1932 of hand-hewn native stone and oak timber cut in the park, has a family friendly aquatic center and acquaint, time-honored restaurant with log furniture. There are 84 lodge rooms (each with two beds) in addition to furnished cabins that sleep as many as eight. 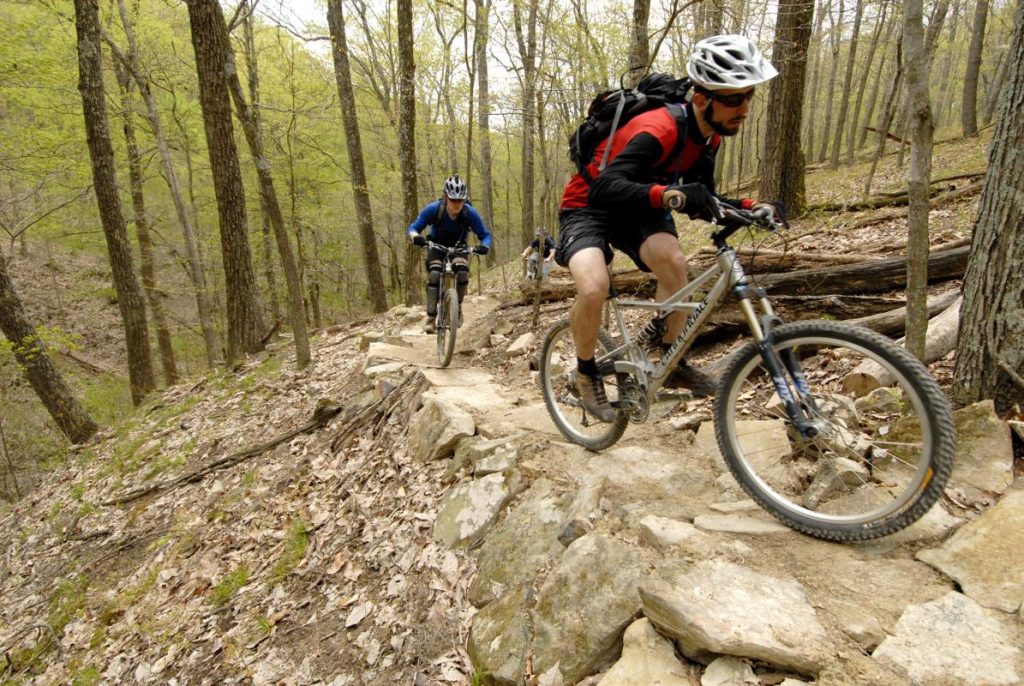 Other offerings at Brown County include a saddle barn with guided horseback rides, a swimming pool, and two lakes for fishing and boating (canoes, kayaks, rowboats). Hiking and mountain biking trails wind through ravines and across streams, with one rugged foot trail leading to a historic fire tower on the highest ridge in southern Indiana. At the Nature Center, groups can study everything from ferns and wildflowers to snakes and butterflies. To give tour members their shopping fix, group planners may schedule a trip to Nashville for a morning or afternoon of perusing downtown’s many craft and gift shops.

An hour or so south of Brown County, tucked in an area of bluffs, caves and rolling hills known as Limestone Country,lies Spring Mill State Park, just outside of Mitchell. Its star attraction is Pioneer Village, a re-creation of an early 1800s settlement. Centered around an 1817 limestone gristmill powered by an idyllic creek that provides soothing “background music,” the village consists of 20 log buildings original to the site or transplanted from nearby locations. After the mill closed in 1892, the settlement was soon abandoned, but the Civilian Conservation Corps (CCC) started restoring it in 1933. Interpreters staff some of the cabins, which include a woodworking shop, blacksmith shop and weaving house with loom demonstrations. 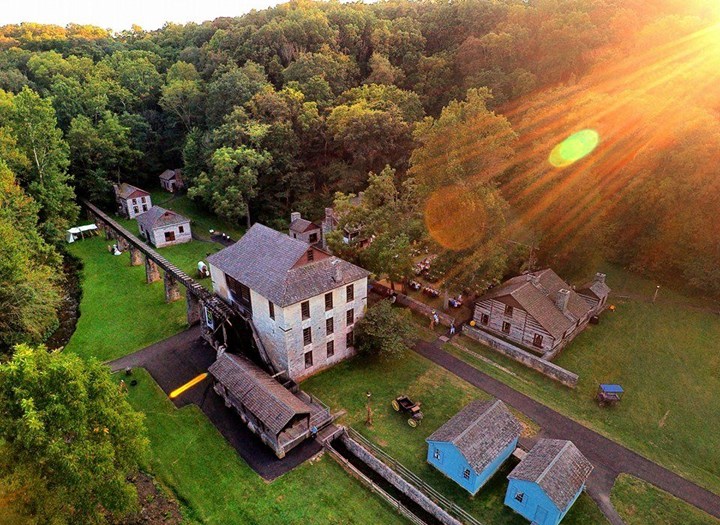 Visitors can tour the gristmill and see hourly demonstrations as the massive wooden wheel sends the gears into motion; bags of stone-ground corn are for sale. Exhibits on the creaky upper floors showcase pioneer tools, farm equipment and household items.

At Spring Mill Inn, a 74-room limestone building with charming country decor, guests can relax on rockers on the patio, enjoy the indoor/outdoor pool, sit before the lobby fireplace and play in the lower-level games arcade. The woodpaneled Millstone Dining Room serves a bountiful dinner buffet featuring entrees like meatloaf, fried chicken and chicken fried steak with cream gravy. A specialty is the persimmon pudding. With a taste similar to pumpkin, the dessert is made from the plum-sized fruit celebrated every September during the Mitchell Persimmon Festival.

Mitchell’s hometown hero, astronaut Virgil I. “Gus” Grissom, is remembered at Spring Mill with a memorial and museum. America’s second man in space, he died in a launch pad fire in 1967. Sightseeing at Spring Mill also might include the Twin Caves boat tour, a ride that goes about 500 feet into a cave. Groups can arrange naturalist-led cave tours, hikes and history talks. Spring Mill Lake has boat rentals.

Like Spring Mill, Lincoln State Park, has a lake with boats for hire and some historical attractions. Its Lake Lincoln even has a sand beach. Deep in southernmost Indiana, the park is aptly named, as Abraham Lincoln roamed these woods, cut down trees and worked the fields of the family farm from ages 7 to 21. Mr. Lincoln’s Neighborhood Walk, one of the park’s six hiking trails, passes by Little Pigeon Primitive Baptist Church (the third building on the site) and the gravesite of Abe’s sister Sarah, plus the site of the mill frequented by the future president. On select summer dates the park’s 1,500-seat Lincoln Amphitheatre, one of the largest covered amphitheaters in the country, presents the drama Young Abe Lincoln. The venue also features country and pop singers in concert and last year hosted Billy Joel, The Beatles and Jimmy Buffett tribute acts. 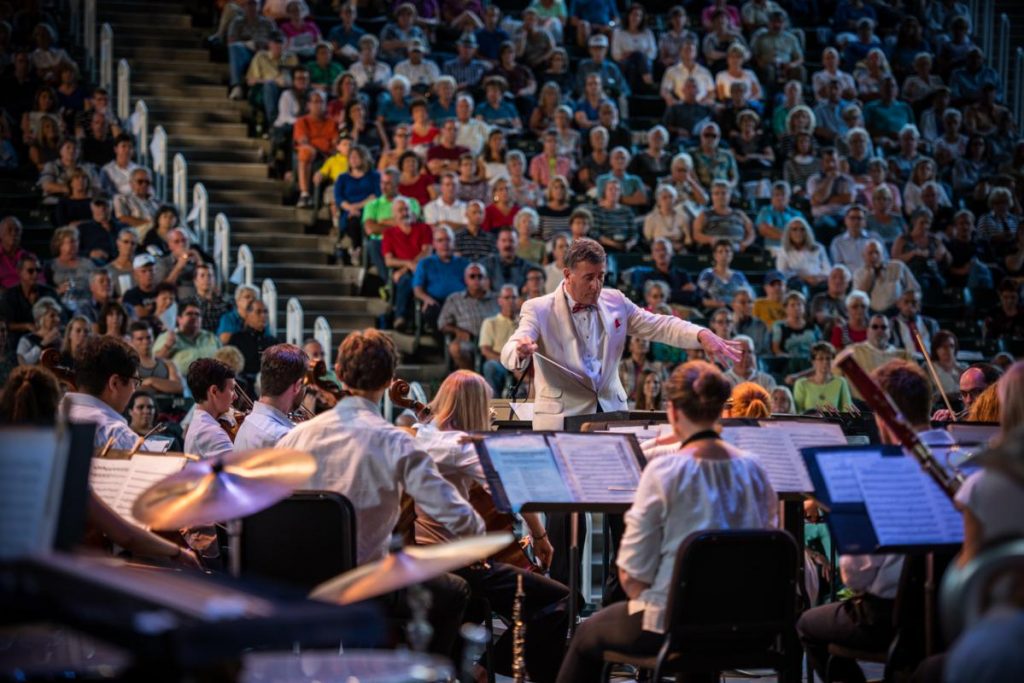 Near the park entrance, Abraham Lincoln Bicentennial Plaza has a bronze bust of the 16th president set on a limestone base inscribed with milestones of his life in Indiana. Just across the road from the state park is the Lincoln Boyhood National Memorial, which includes a museum and living history farm. Lincoln State Park has no inn but does offer family cabins that sleep up to six. Its Pine Hills Group Camp accommodates 157 people with sleeping cabins, a dining hall, kitchen and restrooms with showers.

Dedicated in 1916 as part of the state’s centennial celebrations, this is Indiana’s oldest state park. Located northwest of Bloomington, it is a land of canyons and ravines. Hikers make a beeline for Canyon Falls, where the boulder-strewn creek tumbles past walls of limestone. Another trail leads to a 1930s fire tower that was used for spotting forest fires until 1967; a trek to the top of the 86-foot steel structure is not for the height-challenged. 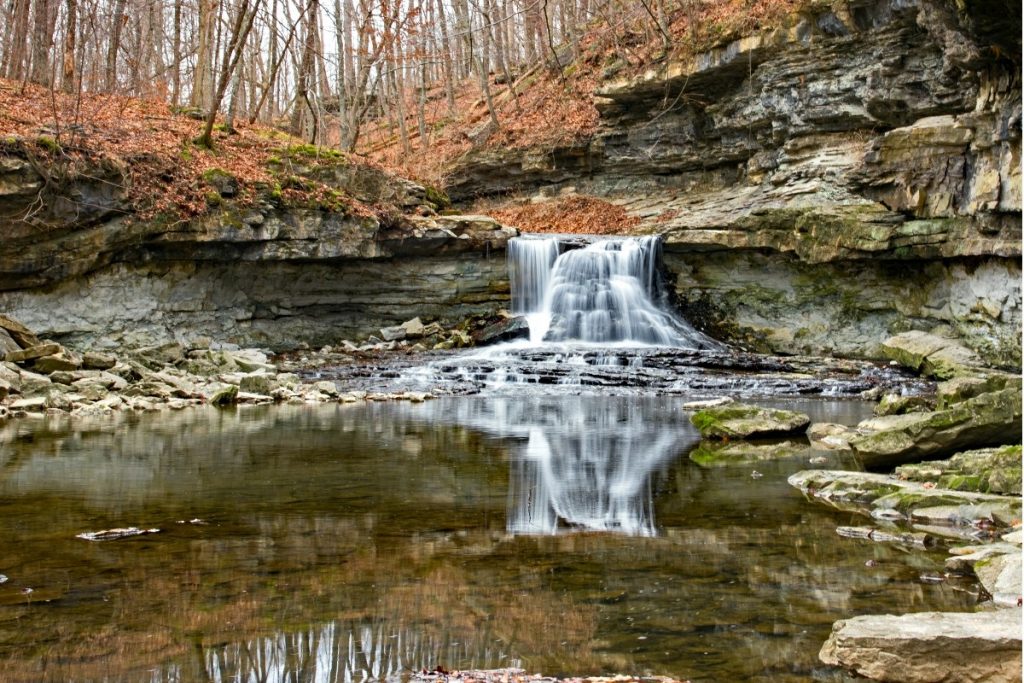 The 76-room, red-brick Canyon Inn at McCormick’s Creek was a sanitarium built by an Indianapolis doctor as a restful place for wealthy patients to recuperate. Amenities today include an outdoor swimming pool, the Hickory Room restaurant, and a comfy lounge with log and leather accents. The park also has two group camps with four sleeping barracks (25 people each) and a large dining hall with kitchen. 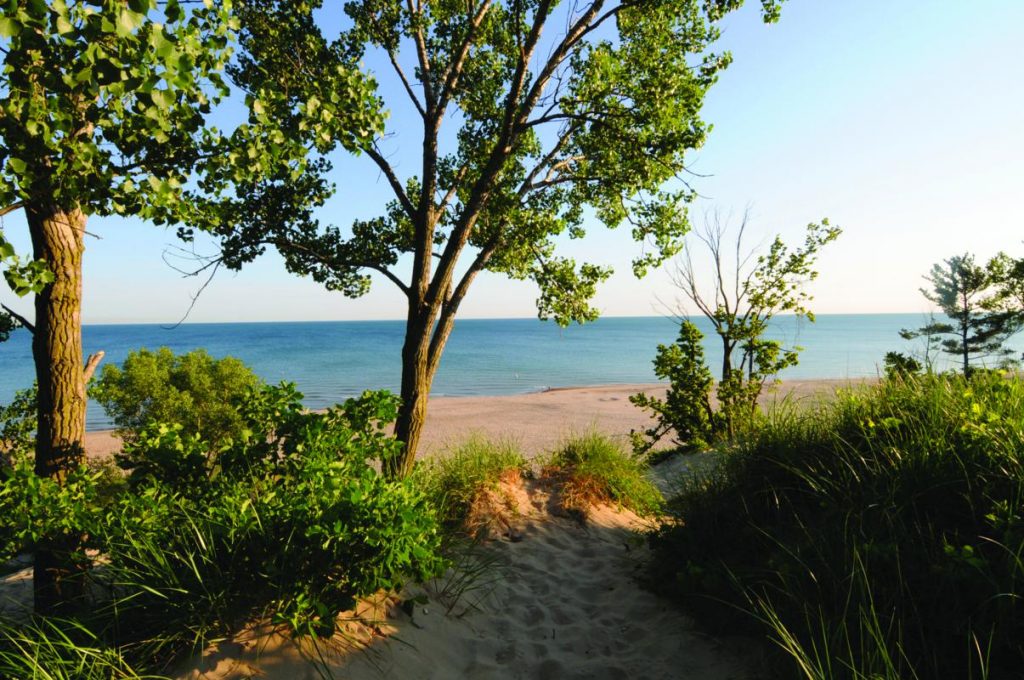 Within close proximity of another metropolitan area is Indiana Dunes State Park, where visitors build sandcastles on Lake Michigan beaches and climb the massive mounds of sand. More than 16 miles of trails traverse the dunes. Located near Chesterton in northwest Indiana, the state park includes three miles of shoreline and is surrounded by a larger national park—Indiana Dunes National Lakeshore. From majestic hills of sand to woodland trails threading craggy canyons, from lakefront beaches to indoor pools, the state parks of Indiana offer a tempting variety of settings for active group getaways.

Seven of Indiana’s 24 state parks have inns, all with full-service dining rooms. The 57-room Turkey Run Inn, the centerpiece of canyon-laced Turkey Run State Park in west-central Indiana, features an indoor pool, as do the 126-room Potawatomi Inn at northeast Indiana’s Pokagon State Park and the 71-room Clifty Inn at Clifty Falls State Park, a park best known for its captivating cascades and lofty perch high above the Ohio River. Pokagon is a water lover’s paradise commanding the shores of Lake James and Snow Lake, and its lakefront inn has a beach. The Clifty Inn offers spectacular views of the mighty Ohio, and one wing overlooks historic Madison, a tourist favorite in southeast Indiana.

For outdoor pleasures in an urban setting, consider Indianapolis’ Fort Harrison State Park, a green oasis that includes a golf course and 28-room lodge, plus accommodations in four officers’ homes. Old Fort Harrison was a military training camp and on site is the Museum of 20th Century Warfare.