Enjoying Spain at Its Best and Most Beautiful 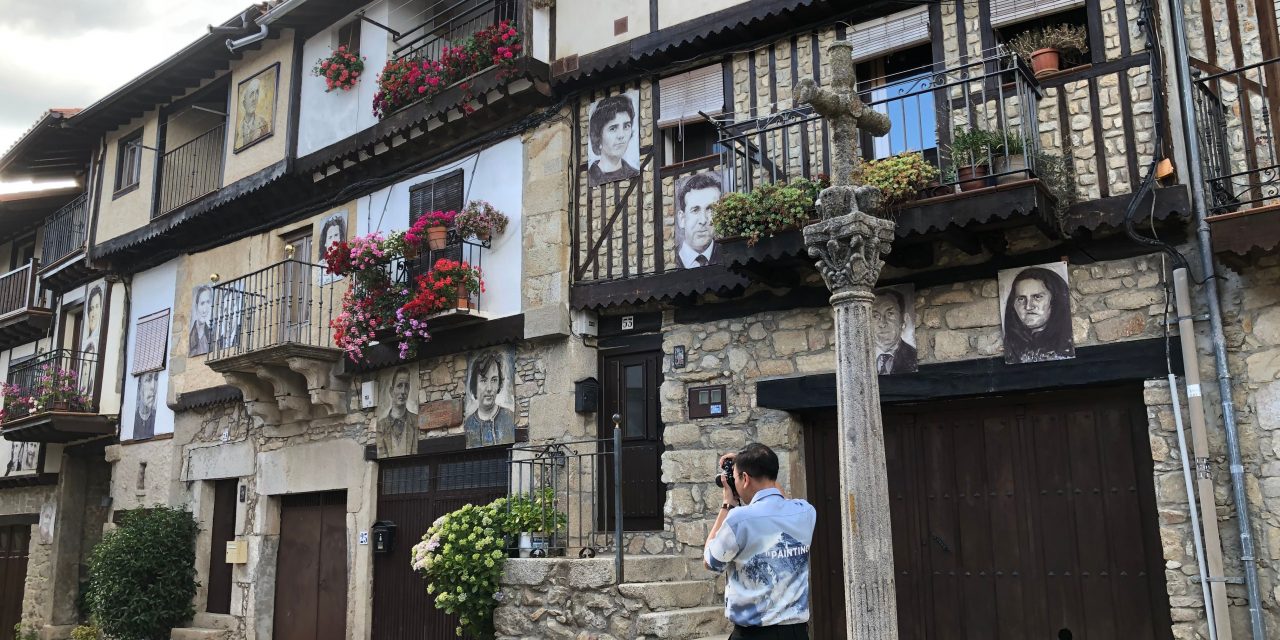 Straying off the beaten path in Castile-Leon, a region ripe for discovery

Does your town have a distinct look or personality? Something that really sets it apart from others?

In western Spain, tiny Mogarraz (pop. 250) plasters its personality all over town, festooning houses with pictures of residents past and present. These portraits are large artworks that visitors can’t help noticing as they prowl the little plazas and narrow streets of this obscure town in the Sierra de Francia Mountains of southern Salamanca province.

Overlooked by most travel guidebooks, quirky Mogarraz was one of my favorite discoveries on a recent trip that included some under-the-radar places in Castile-Leon, one of Spain’s 17 autonomous regions. Our group concentrated on the region’s less-traveled western frontier, dropping in on remote rural areas, sampling three of its designated wine routes and venturing as far as the Portugal border. 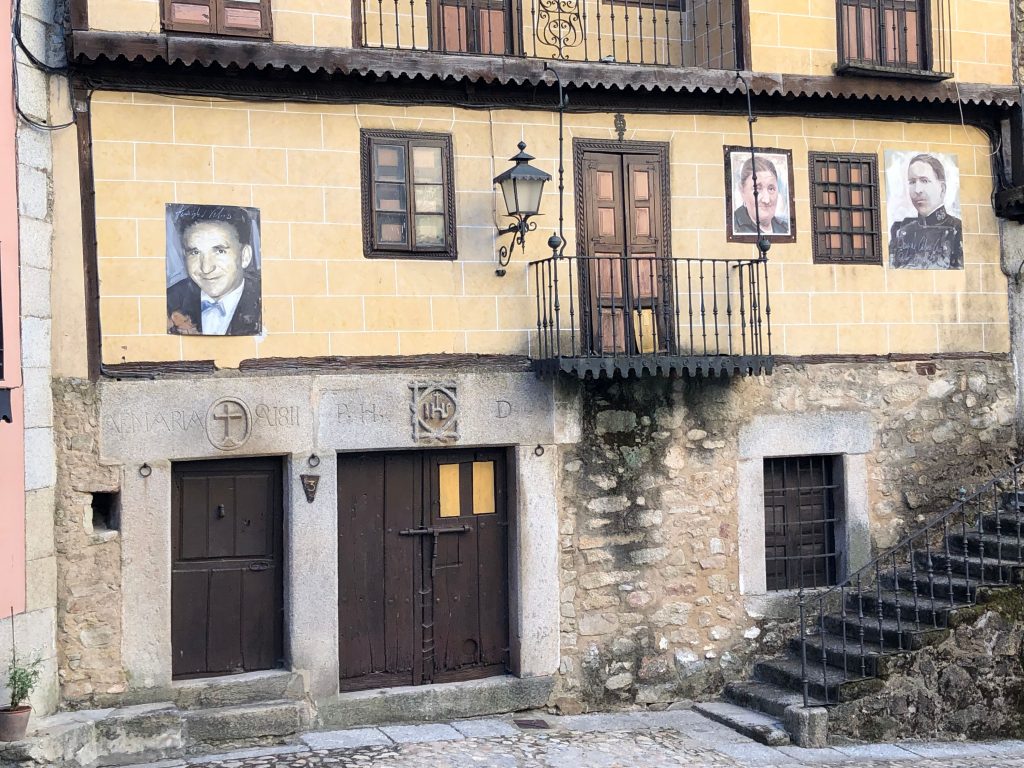 Portraits of residents painted by a local artist decorate the homes in Mogarraz, a small village on the Sierra Francia Wine Route in western Spain. (Randy Mink Photo)

This was my first trip overseas in three years, so I was more than revved up. Like a lot of Americans whose international travel plans were stifled by the pandemic, I had been itching to travel abroad. What a joy it was to be in Europe again! Each day was a revelation, a real adventure delving into art history, gastronomy, wine, and everything that gets me psyched about Spain. Talk about pent-up wanderlust. The week-long trip provided a much-needed boost indeed.

Castile-Leon situated west and north of Madrid, makes up about 20 percent of Spain’s total area but is only its sixth largest region in the population (2½ million). Consisting of nine provinces, the vast chunk of real estate is slightly bigger than Portugal. Castile-Leon claims nine of Spain’s 34 wine routes (rutas del vino) and counts more than 400 wineries. It boasts three UNESCO World Heritage Sites—Salamanca (which our group visited), Segovia and Avila.

The quaint medieval village of Mogarraz, on the Sierra de Francia Wine Route, would be a delightful destination if just for the enchanting cobblestone lanes that snake past its stone and half-timbered houses, many with flower-filled balconies. But portraits of the people who live in these ancient buildings add a strange twist. Charming, if a bit bizarre. 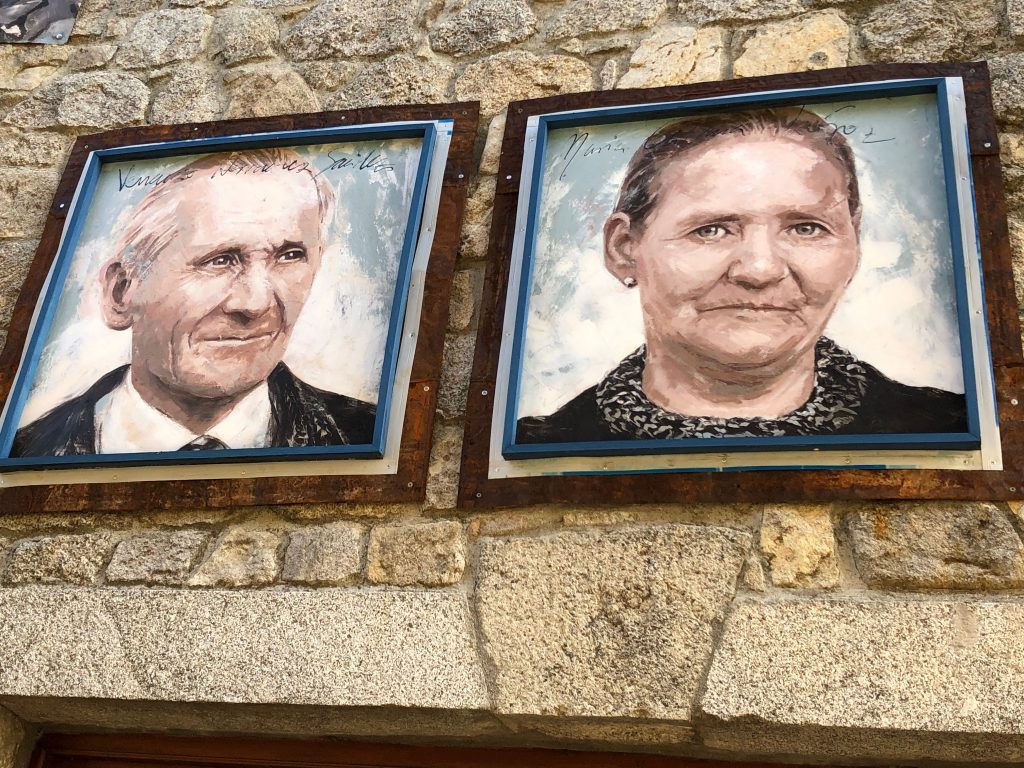 Portraits of townspeople give the streets of Mogarraz a personality all their own. (Randy Mink Photo)

The novel art project began in the 1960s when poverty in the area drove many residents to seek jobs in South America, for which they needed a photo ID card. These IDs inspired the idea of decorating houses with photographs of the adults who lived in them. In 2012, local artist Florencio Maillo took over the project and today he paints each of the 300-some portraits, from wizened grandmothers to young men in military caps.

Mogarraz and other towns in this mountainous region base their economies on tourism and winemaking. The delicate, dark-skinned rufete grape is special to the Sierra de Francia area, where vines have been tended in terraces for centuries.

Our nest for the night, Hotel Spa Villa de Mogarraz, was right in the heart of the fairy-tale town and just steps from Bodega Vinos La Zorra. Under a tent canopy on La Zorra’s streetside patio, bistro patrons savor wines and tapas at tables fashioned from colorfully painted oil drums. We noshed on croquetas (croquettes), those addictive deep-fried balls of mushy goodness, and patatas meneas, mashed sweet potatoes flavored with garlic and paprika and topped with a pork rind. 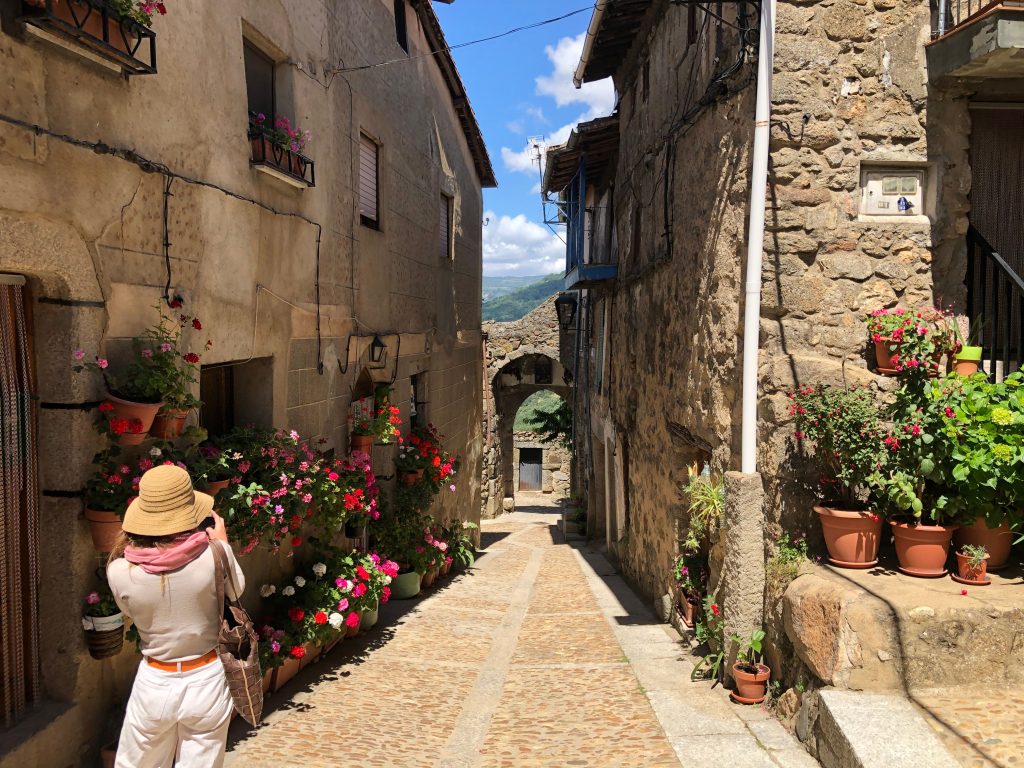 Our group also went back in time in Miranda del Castanar, another gem on the Sierra de Francia Wine Route. With a guide, we wandered the cobbled streets and took in forested panoramas from the 12th-century walls of the pretty hilltop village. The medieval castle is now a brewery. Earlier in the day, we had spotted the red-tiled roofs of Miranda del Castanar (pop. 300) during a winery visit at Bodega Cambrico across the valley.

The city of Salamanca, unlike sleepy Mogarraz and Miranda del Castanar, is rather well known as a visitor destination, its historical core centering around the venerable buildings of Spain’s oldest university, founded in 1218. With a magnificent central plaza, lively pedestrian streets and youthful vibe, the manageable, medium-size city of 150,000 offers just the right ingredients for a pleasant day or two of seeing the sights and soaking in the ambience. To me, it’s Spain in a nutshell. 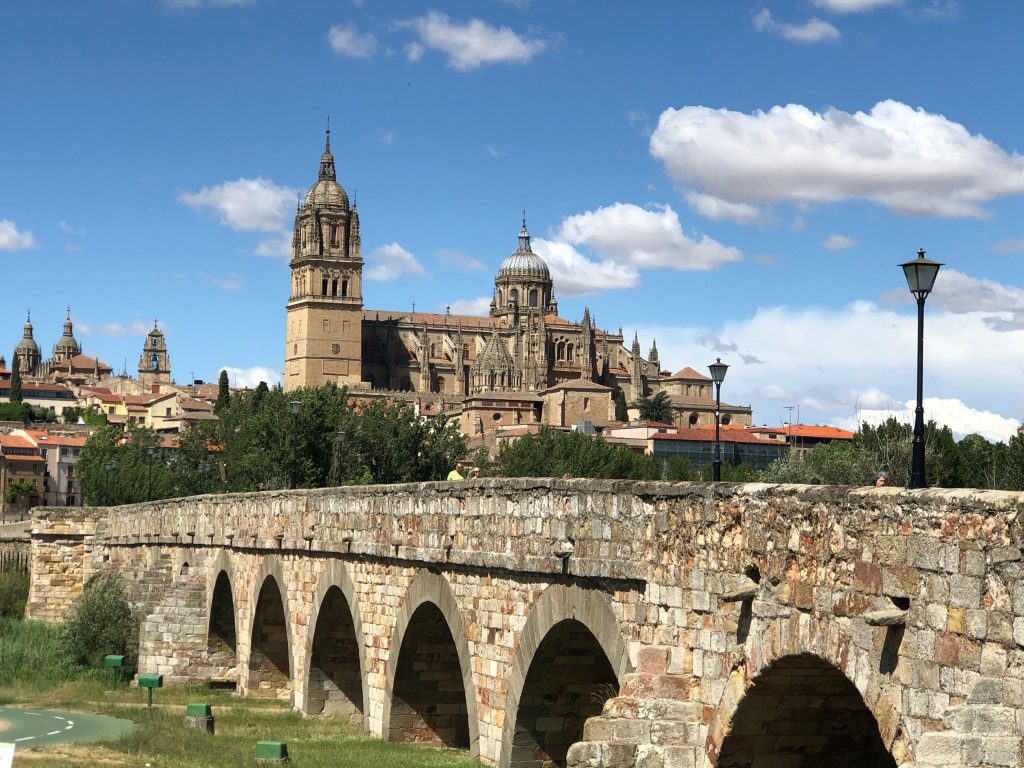 The best views of Salamanca’s Old World skyline are from the banks of the River Tormes and its Roman bridge. (Randy Mink Photo)

In Salamanca’s Old Town, an open-air museum of radiant sandstone buildings, prime attractions lie within walking distance of each other. I recommend these five experiences:

Zamora, a town of 60,000 north of Salamanca, is called the “Romanesque City.” Its 23 Romanesque churches, 10th-century walls, and Duero River bridge ruins provide a magical setting for communing with the past. The Cathedral of Zamora impresses with its Byzantine-style dome, richly carved choir, and 15th-century Flemish tapestries. 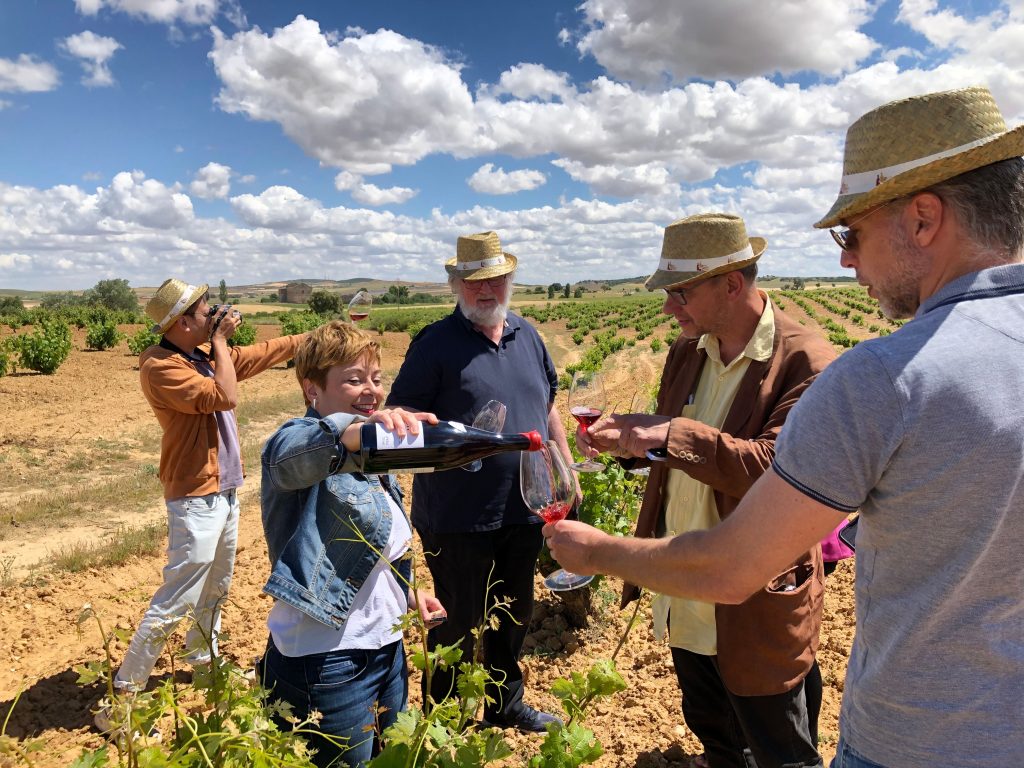 Bodegas Vinas del Cenit is a stop on the Zamora Wine Route. The vineyards were once tended by monks in the monastery visible in the distance. (Randy Mink Photo)

The Zamora Wine Route in Zamora and Salamanca provinces takes travelers through traditional rural landscapes of sheep pastures, hay fields, vineyards, and unspoiled villages with stone houses and Romanesque churches. In Villanueva de Campean, we did wine tastings in the barrel room and vineyards of Bodegas Vinas del Cenit, which makes Cenit Tradicion, an unusual blend of red and white grapes (mostly tempranillo)—a light, refreshing wine with less alcohol. The vines have been mixed since the times of the Franciscan friars who tended them from their 15th-century monastery, the ruins of which we saw in the distance. (Older locals remember when monks still inhabited the monastery.)

“They just wanted to make wine, with no worries whether it was red or white. It was just wine for them,” said Ana Belen Hernandez, Cenit’s director of marketing. “Cenit Tradicion is our commitment to carrying on the tradition and personality of the historic wines of this territory. It’s a wine with no recipe, a wine we think our ancestors would have made.”

Cenit’s 90-year-old vineyards are threaded by the Via de la Plata, or Silver Route, one of the 11 pilgrimage routes to the tomb of St. James in the Cathedral of Santiago de Compostela in Galicia; visitors may encounter pilgrims making the trek.

In the nearby village of Casaseca de Campean, our group enjoyed an atmospheric wine country lunch at Cafe de Quintano. Deep underground, we feasted amid the rustic trappings of a vaulted, 200-year-old cellar. The hard-working servers must have made 20 trips each from the upstairs kitchen to our cozy “cave.” Besides wines, the group menu featured platters of cheeses and paper-thin slices of cured ham, chickpea soup, tuna steak in garlic sauce, and Iberian pork steak with deep-fried vegetables. At dinner the previous night we had two regional specialties—roast suckling leg of lamb and Zamoran-style rice, a zesty dish with pork and paprika. 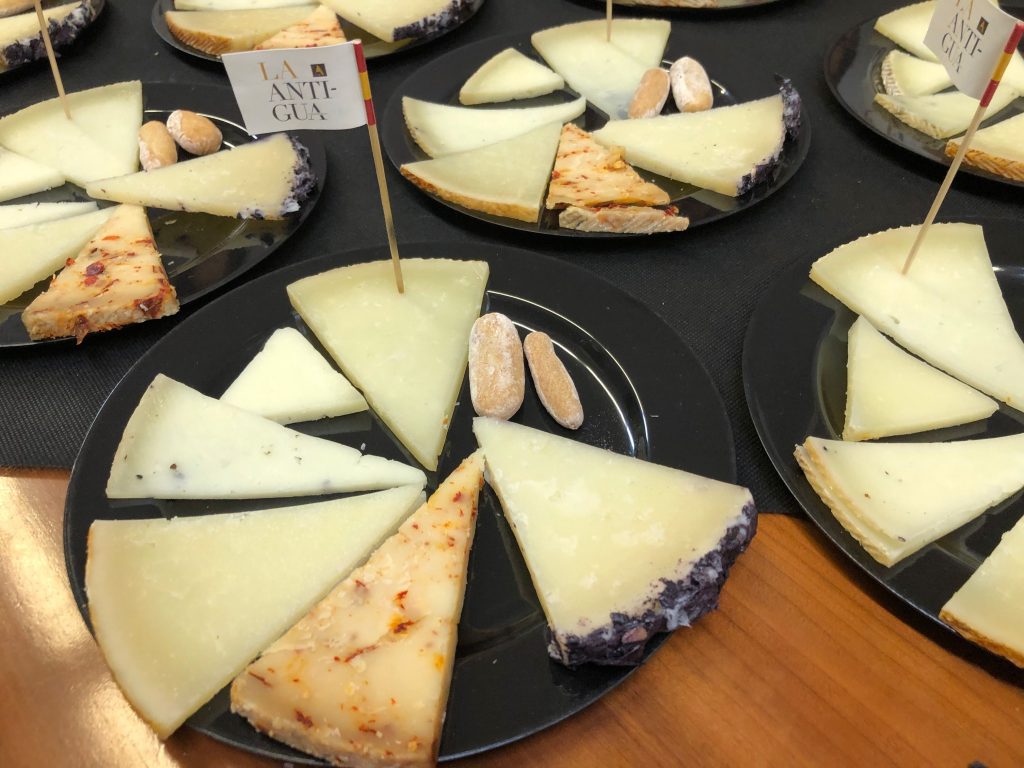 Sampling the product is a highlight on tours of Quesaria La Antigua in Fuentesauco, a dairy that makes sheep’s milk cheeses. (Randy Mink Photo)

My best memory of the Zamora Wine Route was touring Quesaria La Antigua, a high-tech dairy in Fuentesauco. Donning a white plastic coat, hairnet, and shoe covers, we followed guides who explained how sheep’s milk is turned into prize-winning cheeses. Afterwards, we watched a video and sampled six varieties, including one with tempranillo grape skins in the rind, another flecked with paprika flakes. Under construction is a museum that will showcase La Antigua’s passion for making cheese. A sheep farm visit can be arranged for groups.

When our bus passed a shepherd tending his flock later that day, we got giddy and were granted a photo stop. We were en route to the far western stretches of Zamora and Salamanca provinces where the Douro River’s scenic canyonlands straddle the Spain-Portugal border. (“Douro” is the Portuguese spelling; it’s “Duero” in Spanish.) For Spaniards, this remote valley of granite cliffs and outcroppings is considered the “Wild West.”

Our introduction to the Arribes del Duero Wine Route, set against the backdrop of the valley’s Arribes del Duero nature park, involved vineyard and winery visits hosted by Bodega el Hato y el Garabato in tiny Formariz. Dinner and overnight were in the comfortable Posada Dona Urraca in Fermoselle, a quiet Spanish border town famous for its centuries-old network of wine caves (more than 1,000, so they say), a few of which have been opened for tourism. After our subterranean tour and wine tasting, we did more sampling at Bodega Frontio, a winery started by a young Danish entrepreneur who goes by the nicknames “Chus” and the “Crazy Dane.” 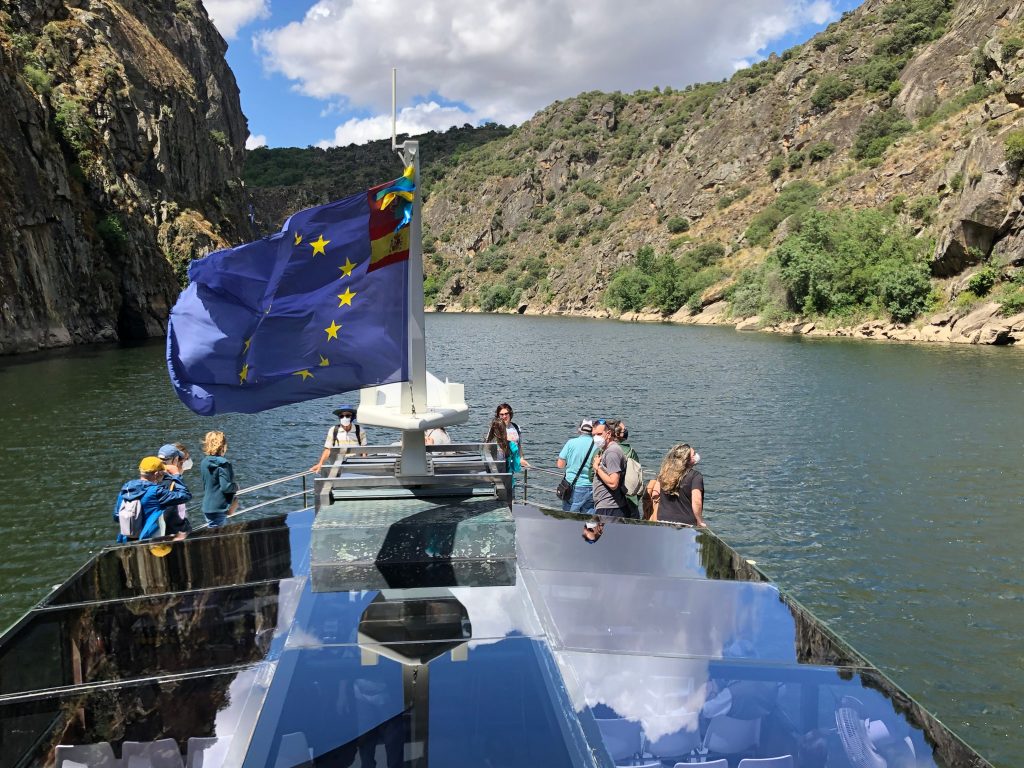 Flying the flag of the European Union, this excursion boat offers a narrated environmental cruise spotlighting the geology, flora, and fauna of the Douro River Valley, a land of scenic splendor on the Spain-Portugal border. (Randy Mink Photo)

A brief foray into Portugal the next day took us to Miranda do Douro, where we boarded an excursion boat for an ecology cruise focusing on the geology, flora, and fauna of the UNESCO Meseta Iberia Biosphere Reserve. Our one-hour journey provided a chance to witness up-close the spectacular gorge topography we had viewed from a lookout point earlier that day.

Exploring Fermoselle and other villages tucked away from the crowds, we often felt as if we had Castile-Leon to ourselves. On early morning strolls up and down the twisting, shadowy alleyways, sometimes the only sounds were chirping birds, crowing roosters and our own footsteps. It was good to be back in the Old Country, making new discoveries in corners of Spain off the beaten track.