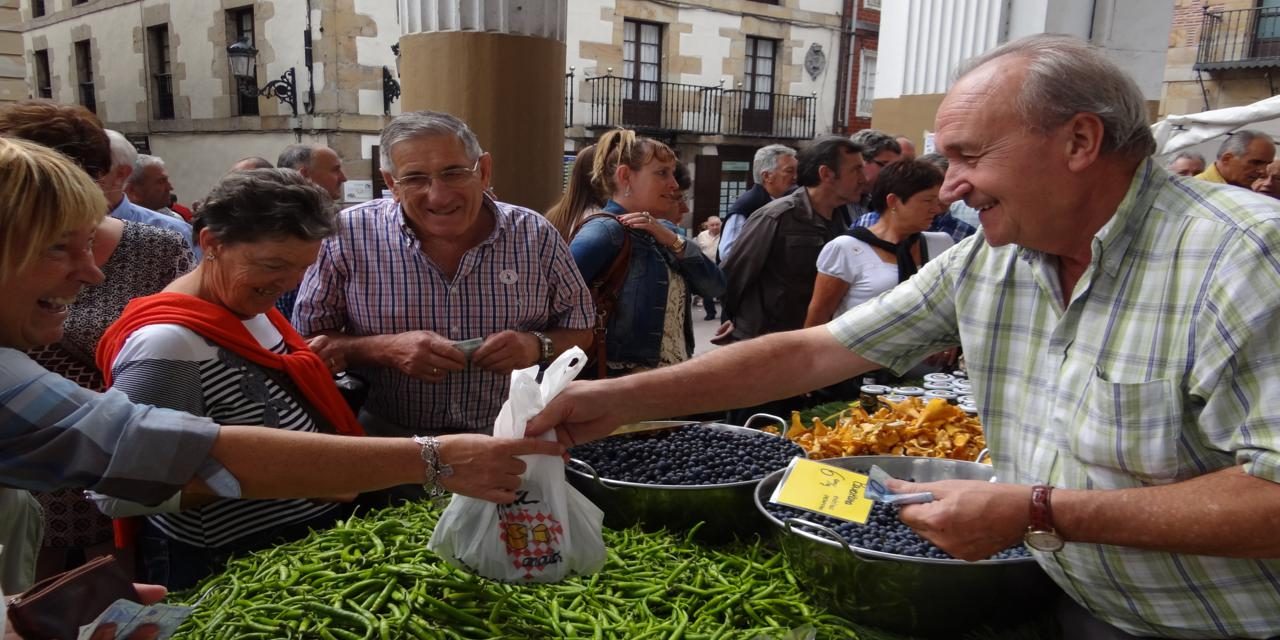 Gastronomy is a vital part of everyday life in Basque Country

As tourism to Spain goes, the Basque provinces in the north have few iconic landmarks and may be somewhat off the beaten path, but for those of us who seek the less-traveled path, that just adds to their allure. Perhaps the region is best known for its culinary prowess, and it has certainly capitalized on the growing interest in food and wine travel.

Celebrated for its inventive chefs and blessed with the highest concentration of Michelin-starred restaurants in the world, this emerging 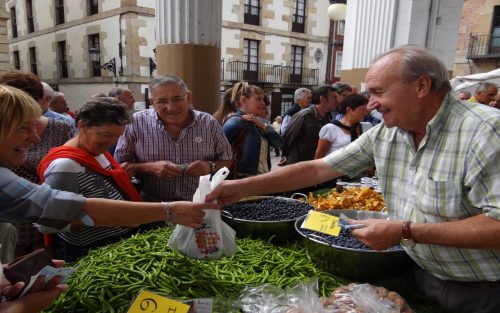 destination has earned a reputation as the place to eat in Spain. In England’s most recent World’s 50 Best Restaurants awards, four on the list were in Spain’s Basque Country. Group tours may not be able to budget $200 per person for haute cuisine at the top-rated temples of gastronomy, but even the simplest fare served up by anonymous chefs and neighborhood bars is worthy of raves.

Reputedly the oldest ethnic group in Europe, the Basques have farmed the green hills and valleys of their homeland for centuries, and their deep-sea fishing industry goes back to the 1500s, when fearless fishermen traveled as far as Newfoundland in search of cod. Today the seafood from cold Atlantic waters and raw ingredients from pastures, gardens, orchards, and vineyards have given Basque Country a rich food culture. Indeed, gastronomy is a hallmark of Basque identity.

With a way of life all its own and a fierce independent streak, the Basque region of northern Spain is practically a country within a country. What really sets Basques apart is their language, Euskara. Speaking Euskara makes one a Basque. Unrelated to any other tongue, it appears bizarre and unpronounce-able to those more familiar with the Romance or Germanic languages. You’ll see Euskara words on menus and road signs (often with the Spanish equivalents) and notice they are full of k’s, tx’s and z’s.

A highlight of touring Basque Country is indulging in one of the region’s signature treats—pintxos (pronounced “PEEN-chos”). The Basque equivalent of tapas, these exqui-site little bites served at bars and cafes can range from unadorned slivers of dried Iber-ian ham on bread to miniature works of art reflecting the heights of nano-gastronomy. Locals make an afternoon or evening of hopping from bar to bar, selecting one or two pintxos at each and washing them down with a small glass of beer or wine, all done standing or sitting at the bar rather than seated at a table. It’s more a way of socializing than having a meal.

Bar counters piled high with platters of pintxos (usually skewered on sticks or tooth-picks) are really something to behold; the sheer variety is mind-boggling. Most popular is a slice of Spanish omelette (tortilla de patata), a mixture of eggs and potato fried in oil. Everyone has a soft 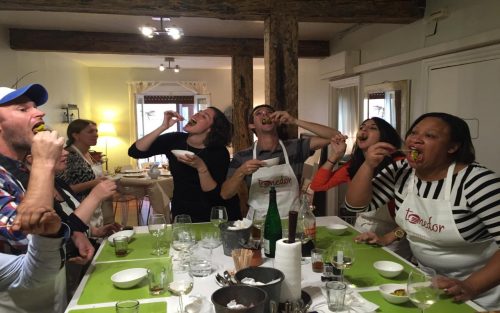 spot if their heart for their mother’s Spanish omelette. Also commonly found is the Gilda, an olive-an-chovy-green chili pepper medley eaten in one bite. Other snack-sized morsels might include mayonnaise-based salads, grilled wild mushrooms, and the huevo frito, a heavenly, deep-fried pillow of dough filled with hot, runny egg, a slice of potato and a bit of bacon.

In foodie havens like the coastal cities of Bilbao and San Sebastian, you might book your group on a walking tour of their respective Old Quarters, with stops for pintxos along the way. The walk in Bilbao may include passing through the stalls of Ribera Market, the largest indoor food market in Europe. Aside from exploring the Old Quarter, the chief tourist activity in Bilbao is visiting the Guggenheim Museum, a repository of modern art more famous for its architecture than for the works inside. Designed by controversial architect Frank Gehry, the curvaceous jumble of gleaming titanium strips put Bilbao on the world map after its completion in 1997. 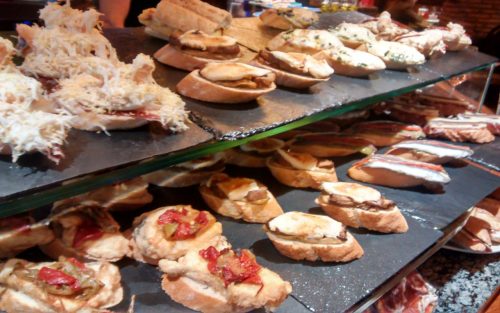 farm visits, and wine, cider and craft beer tastings. Groups can also pick up some cooking secrets and enjoy lunch at a txoko, a traditionally male gastronomy club where men come together to cook and bond.

Memberships in these culinary fraternities are passed from father to son, and many participants have been friends since childhood.(More clubs, though, have been opening doors to women, and a couple even have a female president.)

Today one of Europe’s most prestigious international film festivals (in September) and a collection of Michelin-starred restau-rants enhance San Sebastian’s pedigree, lending the city an aura of sophistication. (Along with Paris, San Sebastian is the only European city with three restaurants—Arzak, Akelarre and Martin Bersasategui—boasting three Michelin stars, the French gourmet critics’ highest rating.) Take a walk along the fashionable beachside promenade along Concha Bay and visions of Monte Carlo, Cannes and Nice come to mind.

A Basque Country tour is not complete without a foray into the famed Rioja Alavesa wine region, an hour-and-a-half drive south of Bilbao and San Sebastian. Tucked into a relatively compact area between the southern slopes of the Sierra de Cantabria and Ebro River are endless vistas of vineyards on terraced hillsides. Protected by the mountain range from coastal winds and moisture, the vines, mostly of the red tempranillo variety, thrive in a microclimate ideal for growing grapes. Rioja Alavesa also hosts a thriving olive industry; olive oil sampling and olive mill visits can be arranged.

Just as ancient Laguardia rises ship-like over the sea of vineyards, a much newer landmark looms prominently on the horizon just four miles away. Dominating Herederos del Marques de Riscal winery is the undulating tangle of purple, silver and gold metal ribbons of the estate’s Frank Gehry-designed showpiece hotel, a building reminiscent of his Guggenheim Museum. The eruption of steel and titanium, according to one guide-book, “looks as if a colony from outer space had crashed in the middle of La Rioja’s oldest vineyards.” Dubbed “City of Wine,” Marques de Riscal is indeed the region’s oldest winery, dating from 1860. The luxury hotel features a one-star Michelin restaurant.

The town of Astigarraga, south of San Sebastian, is the center of apple-growing country. At a rustic 16th century cider house run by five generations of the Lizeaga family, visitors get a peek into another Basque tradition. Seated on benches at long tables with red-checked 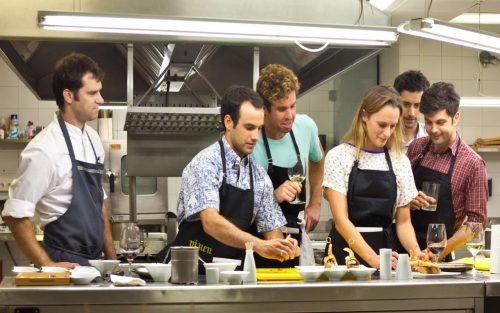 tablecloths, amid wood beams and stone walls, everyone feasts on multi-course meals served family style. The fare might include chorizo sausages cooked in cider, a cod omelette, cod smothered in green peppers and steak served rare, with a typical dessert of cheese, walnuts and quince jelly. When the spigot of the cider barrel is turned on at the cry of “txotx!” diners line up with their glasses to catch the stream of cider spurting out. The wet floor doesn’t dampen the festive atmosphere, which is sometimes enhanced by singing and accordion music.
Farther south in the Basque Highlands, cheese lovers head to Idiazabal to learn about the prized Idiazabal sheep’s milk cheese. On their way to the Idiazabal Cheese Interpretation Centre they’ll likely see sheep on the mountain slopes or even being herded through town. Sheep farms and artisan cheese dairies like World Cheese Awards-winning J. Aranburu—run by brothers Juan, Javier and Jose Aranburu—offer tastings and tours.

Whether you stick to the coast or venture into the countryside, a ramble through Spain’s Basque Country will give you a taste of this ancient culture and perhaps whet your appetite for second helpings on future travels to the Iberian peninsula.

For information on Spain’s Basque Country, contact Basque Tour (Basque Tourism Board) at basquecountrytourism.eus or the National Tourist Office of Spain, spain.info/en.