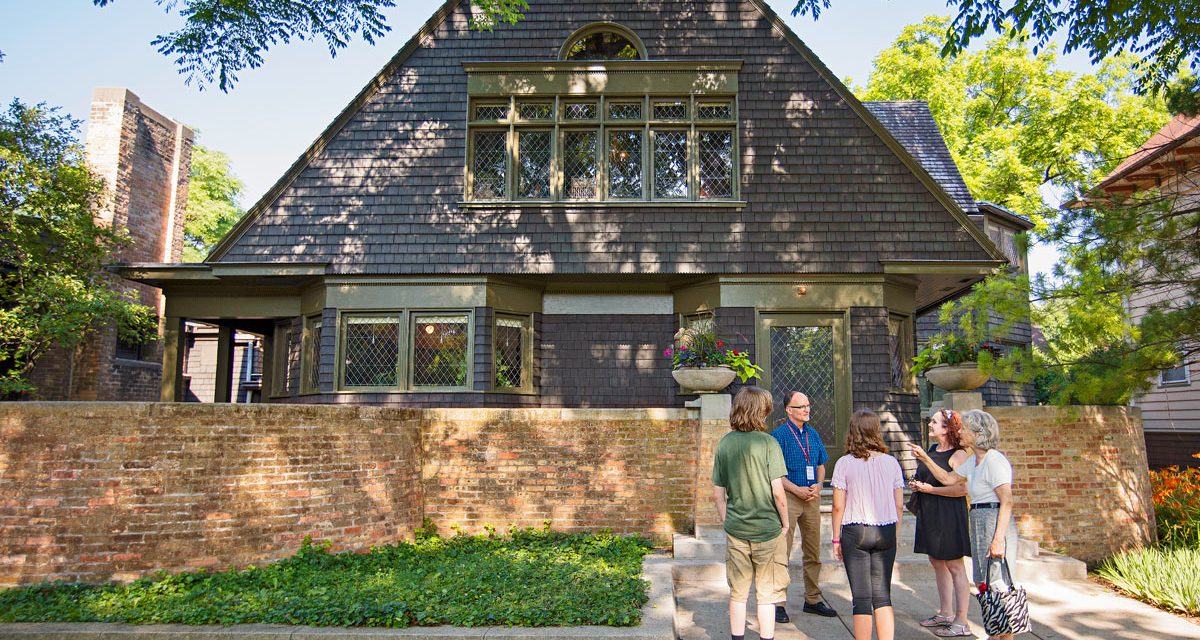 Savor Frank Lloyd Wright architecture with a trip to Illinois, where the legendary architect’s structures are sure to dazzle

Duration: 3 Days
Availability: All Year-long
Suitable For: All

Your Frank Lloyd Wright journey begins on Chicago’s Gold Coast and the Charnley-Perskey House Museum. Before he popularized the Prairie and Usonian styles across the country, Wright was a draftsman for acclaimed architect Louis Sullivan, and their 1892 collaboration on this North Side landmark is considered a major turning point in the development of the American home. While the design is credited to Sullivan, visitors can spot many elements that would become associated with Wright’s distinct style: modernist lines, abstract ornamentation, archways between rooms and elaborate woodwork.

Continue to the heart of Chicago’s Loop to admire the Rookery Building, which was completed in 1888 and considered the city’s first high-rise. While the entire building is considered a masterpiece of early skyscraper engineering, your group will want to spend time in the lobby, which Wright boldly updated with Persian-style ornamentation and a lighting scheme that utilizes the glass ceiling to brilliantly illuminate the space. While you’re in the Loop, browse the city’s famous stores and enjoy a traditional pot pie lunch in the Walnut Room at Macy’s on State Street. 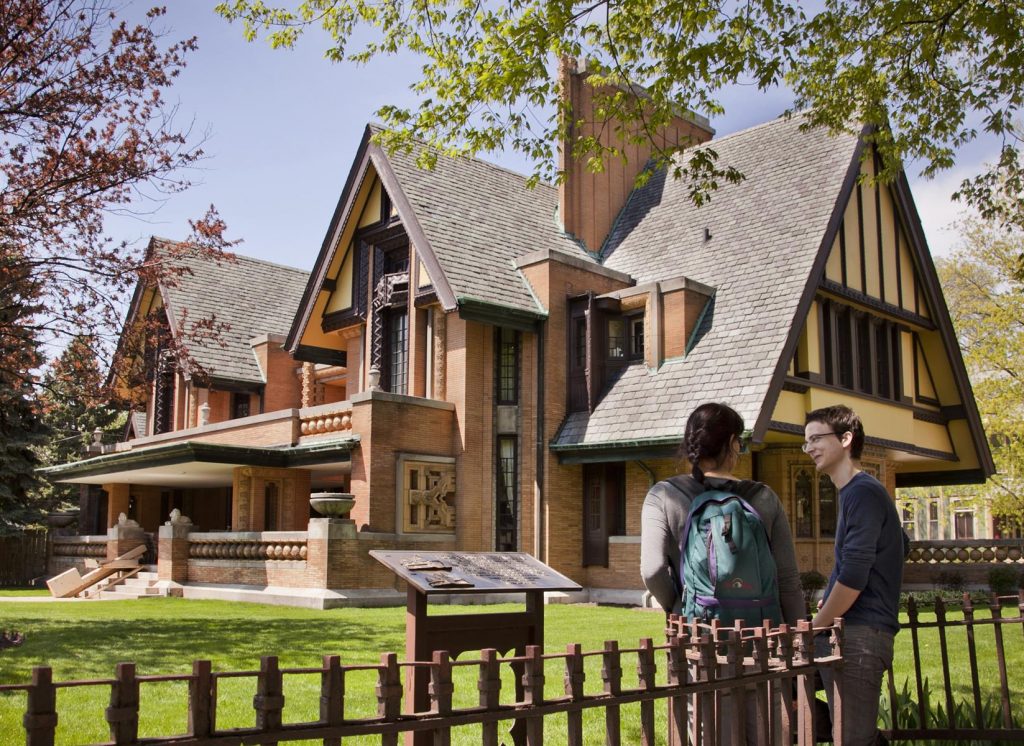 The Frederick C. Robie House, one of Wright’s most iconic buildings and a UNESCO World Heritage Site, is considered the crown jewel of the Prairie style. Located in the historic Hyde Park neighborhood and just outside the University of Chicago campus, the Robie House is available for touring throughout the year and showcases an architect at the peak of his powers. The structure peerlessly integrates Wright’s signatures like low-pitched roofs with overhanging eaves, detailed stained-glass windows, muted colors that evoke the Great Plains and heavy wood accents. Conclude your day with a no-frills meal at Valois Restaurant, a diner frequented by former President Barack Obama when he was a community organizer.

Located just outside the Chicago city limits and seven miles from the Loop, Oak Park is a charming village where Wright moved to with his family in 1889. He would become a fixture of the community for the next 20 years and design 25 Oak Park buildings while perfecting his Prairie style. The area now has the densest collection of Wright-designed structures in the world. Orient your group to the area with a tour of the Frank Lloyd Wright Home and Studio, which Wright designed himself and contains his draft room and original sketches. The Frank Lloyd Wright Trust conducts several tours throughout the neighborhood within walking distance of the studio. 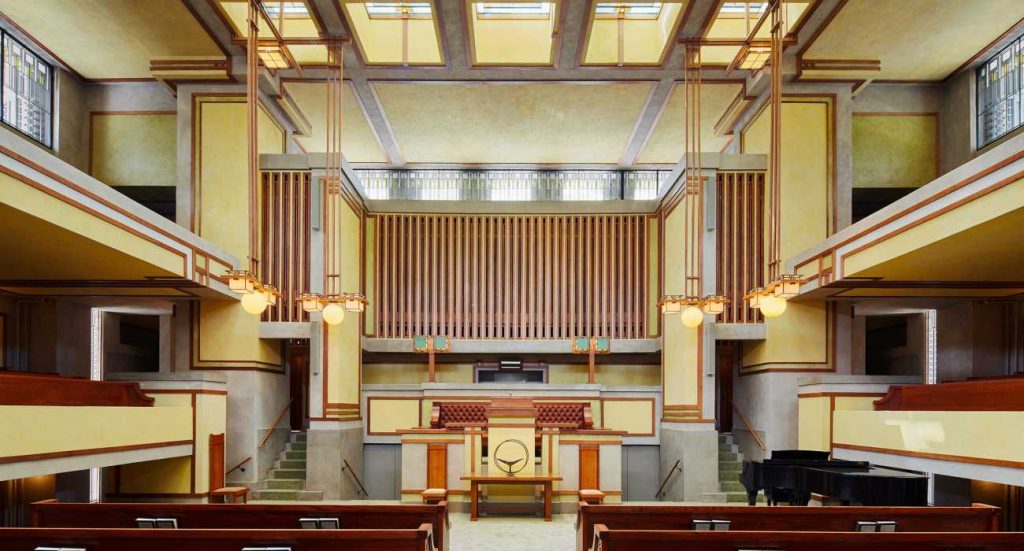 Enjoy lunch at one of the many restaurants on Lake Street before touring Unity Temple, a triumph of modern design and one of Wright’s favorite projects. After a fire severely damaged the local Unitarian church in 1905, he was commissioned to re-imagine the building on a tight budget and resorted to a concrete exterior because it was inexpensive. The material was rarely used in public buildings, and especially for places of worship, but the combination of necessity and inspiration resulted in an iconic building with striking columns and elevated windows that allow natural light to enter but deny worshipers an outside view. The interior is equally revolutionary in that it avoids any explicit religious iconography but instead aims for church unity by integrating vertical lines that suggest transcendence and intimate seating that keeps all worshipers close to the pulpit. Visitors to Oak Park will also want to stop by the Ernest Hemingway Birthplace Home, a well-maintained Victorian house where the famous author lived until he was six.

Begin your morning with a guided tour of the Colonel George Fabyan Villa, a country estate with lovely views of the Fox River that Wright remodeled in 1907. After exploring the property, which includes eclectic touches like Japanese gardens and a Dutch windmill, your group can walk along Geneva’s Third Street to admire Victorian mansions, shop in boutiques and relax in welcoming coffee houses. Before departing Chicagoland, stop at the Muirhead Farmhouse in Hampshire. The only known farmhouse Wright designed and built during his lifetime, this home is a sterling example of his Usonian style, which utilized local materials, cantilevered overhangs and ample natural lighting to create unassuming buildings for middle-class residents. 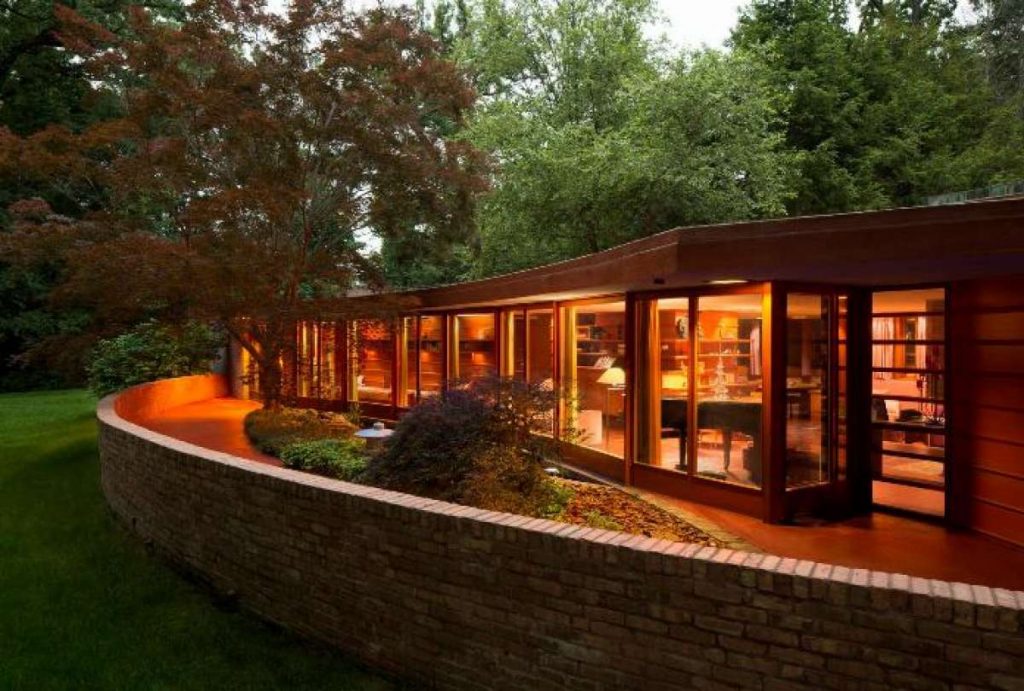 Continue west to the Belvidere Cemetery, where your group can respectfully admire the Pettit Memorial Chapel. A rare Wright cemetery design commissioned by Emma Pettit to honor her late husband, the memorial draws its solemn formality from severe lines, low-pitched roofs and minimal lighting. Conclude your architectural journey at the Laurent House in Rockford, another exceptional Usonian space. Built for a paraplegic U.S. Navy veteran and completed in 1949, this home fuses form and function with a single-story design, open floor plan and floor-to-ceiling windows that maximize views of the backyard to create a sense of tranquility.