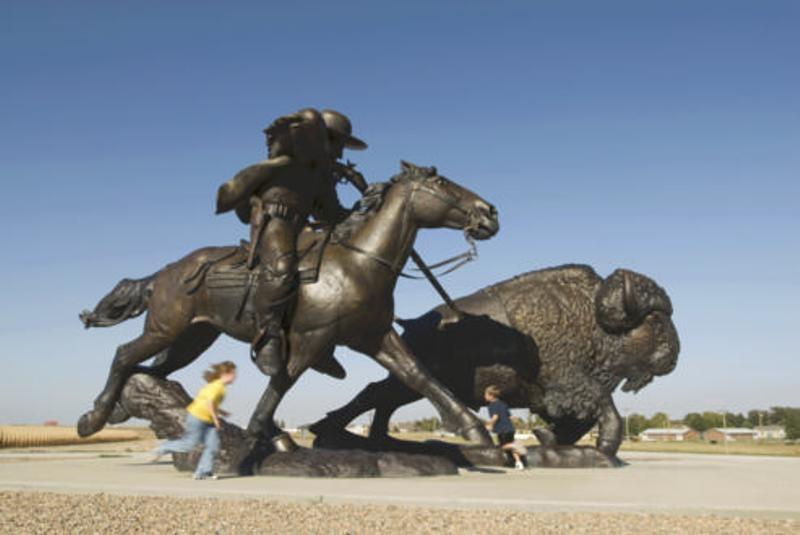 Charles Kuralt, the American journalist known for his long career with CBS and his “On the Road” segments, once said, “Interstate highways allow you to drive coast to coast, without seeing anything.” Stray from the super highways, though, and you’ll find great slices of Americana worth getting out for a picture. With this in mind, Leisure Group Travel presents some favorite roadside attractions for you to spice up your next group trip through Kansas.

Visitors can see Kansas, Iowa, Missouri and Nebraska from a viewing overlooking the Missouri River. Named one of the Eight Wonders of Kansas, the lookout is located in the small historic town of White Cloud, 84 miles northwest of Kansas City, Mo. (dpcountyks.com)

Big Brutus, at 16 stories tall and 11 million pounds, is the second largest electric shovel in the world. The dipper could hold three railroad cars. It cost $6.5 million in 1962 and is now at rest as a Regional Historic Mechanical Engineering Landmark. (bigbrutus.org)

Buffalo Bill Cody earned the legendary title “Buffalo Bill” in this part of the country. The bronze sculpture is 16 feet tall and weighs 9,000 pounds. Visitors can walk up the hill to touch, take pictures of or simply gawk at one of the Eight Wonders of Kansas. (buffalobilloakley.org)

The Garden of Eden, Lucas

Civil War Veteran Samuel Perry Dinsmoor created sculptures around a stone log cabin between 1907 and 1932, using concrete and native post rock. The three-story concrete structures show the story of The Garden of Eden. Also located at this site is Dinsmoor and his wife’s mausoleum, where visitors can view his concrete coffin sealed behind a glass wall. Guided tours are available. (garden-of-eden-lucas-kansas.com)

These silhouettes are life-size iron cutouts that help tell the story of original Chisholm Trail. The “ghosts” serve as a reminder of the great cattle drives from 1866 to 1886, when millions of Texas longhorn cattle passed here on their way to legendary railheads such as Caldwell. The trail was established by Native American tribes and made famous by Jesse Chisholm in the settlement of the Old West. (caldwellkansas.com) 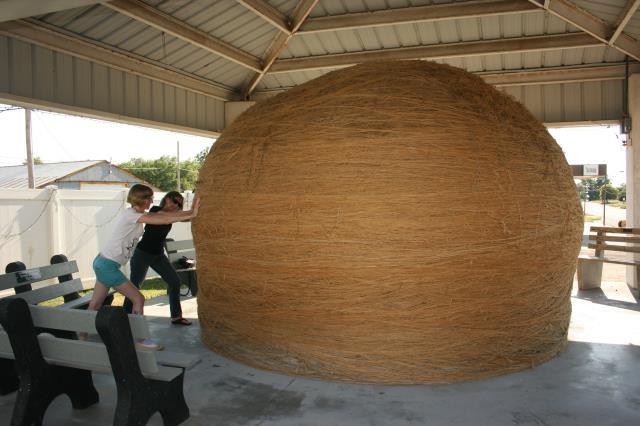 This ball of twine is the world’s largest built by a community. It weighs 17,320 pounds, has a 40-foot circumference and includes over 7,938,709 pieces of sisal twine. Each year, Cawker City Community Club hosts a twine-a-thon in conjunction with the annual Cawker City Picnic and Parade; the ball never stops growing. Frank Stoeber started the twine ball in 1953 on his farm, and it weighed 5,000 pounds by 1957. (kansastravel.org/balloftwine)

Walk along the world’s longest yellow brick road with 11,000 yellow bricks. The road features bricks with celebrity names, a special Veterans section, 28 foreign countries and all of the states in America. People can buy bricks to have their names engraved on them. The VIP section is in front of the Emmett Kelly Museum, which honors the famous clown, a native of Sedan. There is an annual parade on the Yellow Brick Road at the end of May. (cityofsedan.com)

With Kansas being the “Sunflower State” and Goodland being at the center of the local sunflower industry, this is the spot for an oversized replica of Van Gogh’s Sunflowers. This particular painting, known as the American Easel, is a part of The Big Easel’s Van Gogh Project, which involves giant—approximately 23 by 33 feet—replicas of Van Gogh’s sunflower paintings. Other paintings are located in Canada and Australia. (thebigeasel.com)

The Davis Memorial, located in Mount Hope Cemetery, is a nationally recognized site that was featured on Ripley’s Believe It or Not. Made in Italy during the 1930s, there are 11 life-size marble statues of John and Sarah Davis and a marble canopy that weighs over 50 tons. (kansastravel.org/davismemorial)

The Pony Express bronze statue commemorates the young riders and their ponies that carried mail from St. Joseph, Mo. to Sacramento, Calif. and back. Although the Pony Express lasted only 18 months from 1860-1861, a re-ride route takes place every year in June. (marysvillekansaschamber.org)

Visitors to this site, located eight miles west of Elkhart on State Line Road, can view or stand in three states—Kansas, Colorado and Oklahoma—at one time. The monument, built in 1903, is a windmill with the three states’ names on the blades. In fact, the windmill does not mark the connecting point between the three states, so a brass plate is placed on the ground to mark this spot.