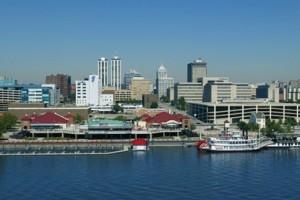 Though I’ve lived in Illinois all my life, I finally had a chance to visit this mid-size city a few weeks ago.

My first impression? Downtown Peoria has more tall buildings than I had expected. It’s not Manhattan or Chicago, but the skyline surprised me nonetheless.

Peoria and the surrounding area, moreover, have plenty of tourist hotspots, enough to keep a group busy for two or three days.

Located in Western Illinois, midway between Chicago and St. Louis, Peoria is the largest city on the Illinois River and owes much of its economic development and cultural fabric to this tributary of the mighty Mississippi. The metro population is 389,000.

A fan of historic hotels, I stayed at downtown’s Hotel Père Marquette, a 1927 landmark named after Father Jacques Marquette, a French priest who explored the Illinois River Valley in 1673 with Louis Jolliet. A mural in the classic lobby depicts their landing and encounter with Indians. High above the front desk, a long, gilded sculpture shows the French explorers in a canoe. Any nostalgia buff poking around the lobby and public rooms will admire the crystal chandeliers and carved moldings as well.

Guests of the Père Marquette have included Dwight Eisenhower, John F. Kennedy, Gerald Ford and Ronald Reagan, not to mention a long list of celebrities, from Bob Hope to Jay Leno. Liberace played piano in the Peoria Room for $45 a week in 1937, long before picking up his trademark candelabra and glittery costumes.

The hotel, still a smart downtown address, has kept up with the times, though guest rooms and hallways gracefully show their age. A major facelift and a brand new Marriott Courtyard property next door are set for completion in 2013. 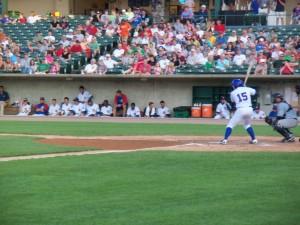 The downtown commercial district lies within easy walking distance of some of Peoria’s top attractions, including O’Brien Field, home of the Peoria Cboat ohiefs, the Single A affiliate of the Chicago Cubs. Like minor league baseball in many mid-size cities, there’s a nice family atmosphere with lots of giveaways, games and entertainment. The mascot is Homer, a Dalmatian in a firefighter hat. Cubs Hall of Fame second baseman Ryne Sandberg was a recent Chiefs manager.

The riverfront district, a few blocks down the hill from the Père Marquette, has seen more than $150 million in development during the last decade. A magnet for tourists and locals alike, the Peoria riverfront offers a mix of restaurants and shops, plus loft apartments carved out of old warehouses. Festivals and concerts draw crowds in the warmer months, and the Spirit of Peoria paddlewheel river operates sightseeing cruises.

Other riverfront diversions include horse-drawn carriage rides, Segway tours and quadracycle bike rides. Or just stroll along the riverfront promenade, look at the public art and gaze out at the barges and pleasure boats. The outdoor terraces of Joe’s Crab Shack and Old Chicago Pizza and Pasta also afford river vistas. A transplanted historic building houses a visitor information center operated by the Peoria Area CVB.

Shoppers in the riverfront district flock to the Illinois Antique Center, where more than 100 dealers display vintage wares in a former furnace manufacturing plant. You’ll find everything from baseball cards, books and Elvis albums to telephones, Coke signs and framed movie posters autographed by the cast.

Many out-of-towners ask about the big construction site by the riverfront. When completed in fall of 2012, this seven-acre plot on the former site of the Sears store will be a park-like cultural campus anchored by the Peoria Riverfront Museum and the Caterpillar Experience. The latter attraction will present a high-tech, interactive look at the past, present and future of Peoria-based Caterpillar, Inc., the world’s leading manufacturer of construction and mining equipment, diesel and natural gas engines, and industrial gas turbines. The world headquarters of Caterpillar is located near O’Brien Field, and you’ll see several downtown buildings with Caterpillar offices. A Caterpillar retail store has toys, logo wear and other souvenirs bearing the logo of the Fortune 50 company, by far the city’s largest employer. Due in large part to the export success of Caterpillar, Peoria in 2008 ranked as the 20th largest market for exports from the U.S.

The Peoria Riverfront Museum will feature regional history and art exhibits, the Illinois River Encounter gallery, a 3-D IMAX theater and planetarium. A partner in the project is Peoria’s Lakeview Museum of Arts and Sciences, the largest private museum in Illinois outside of Chicago and one of fewer than 50 U.S. museums specializing in both the arts and sciences. Other partners include the African American Hall of Fame Museum and Illinois High School Association, which is developing the IHSA Peak Performance Center, a space that will explore student and team achievements of schools around the state. 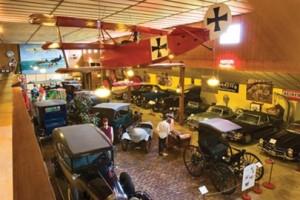 For scenic vistas of the Illinois River Valley, travel along Grandview Drive, called the “world’s most beautiful drive” by President Theodore Roosevelt, and continue to Peoria Heights’ Tower Park, where a glass elevator zooms up to a three-level observation deck overlooking the valley. Once a water storage tower for the Pabst brewery, the historic structure, one of my favorite Peoria discoveries, has telescopes; directional markers point out area towns and attractions. The tower and pavilion can be reserved by groups. Also of note is the park’s bronze bust of Abraham Lincoln by Gutzon Borglum (designer of Mt. Rushmore), identical to the one at Lincoln’s Tomb in Springfield, Ill. and in the U.S. Capitol rotunda.

East Peoria, just across the river from Peoria, has two major crowd-pleasers. The riverfront Par-A-Dice Casino offers four floors of gaming action, plus a buffet restaurant and 202-room hotel. Pleasant Hill Antique Mall, in a converted school, is a mammoth place with more than 200 dealers and requires at least an hour.

Groups also can spend a lot of time where the buffalo roam. Wildlife Prairie State Park in Hanna City, a short drive west of Peoria, is home to 20 bison that graze in the tall grass along with a herd of elk. Guests can view the animals from an observation platform or take a safari bus through the fields. From the visitor center, a building loaded with animal exhibits, paths lead to large, wooded enclosures inhabited by gray wolves, bears, foxes, coyotes and cranes. The Pioneer Homestead has farm animals and historic buildings, including a one-room schoolhouse that was used until 1957. The park also features hiking trails, gift shops and wildlife demonstrations. 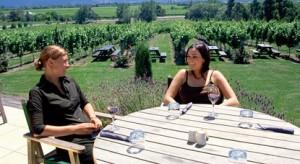 Kickapoo Creek Winery, a group-friendly spot near the wildlife sanctuary, offers tastings, tours and a private room for catered meals, plus picnic areas, walking trails and two lakes. A tram, called the Grape Train, makes stops throughout the vineyard/nursery. Popular wines include Red October, Kringle’s Kranberry, Two Berry (tastes like blueberry pie with a touch of blackberry) and Dave, a slightly sweet strawberry wine that is a favorite of the owner, Dr. Dave Conner, a retired orthopedic surgeon. Try dessert wines like Chocolate Strawberry, Chocolate Raspberry and Chocolate Cherry Sherry. Other wineries include Mackinaw Valley Vineyard in Mackinaw and Willett’s Winery and Cellar in Manito.

Groups touring the area will find a wide choice of historic towns, nature preserves and recreational activities along the Illinois River Road National Scenic Byway, which follows both sides of the river from Ottawa in the north to Havana in the south.

Havana has a charming downtown with a brick main street and specialty shops in vintage buildings. Nearby are Emiquon and Chautauqua national wildlife refuges.

Group travelers, whether their interests lean to history, nature or shopping, will find plenty of places to play in Peoria.