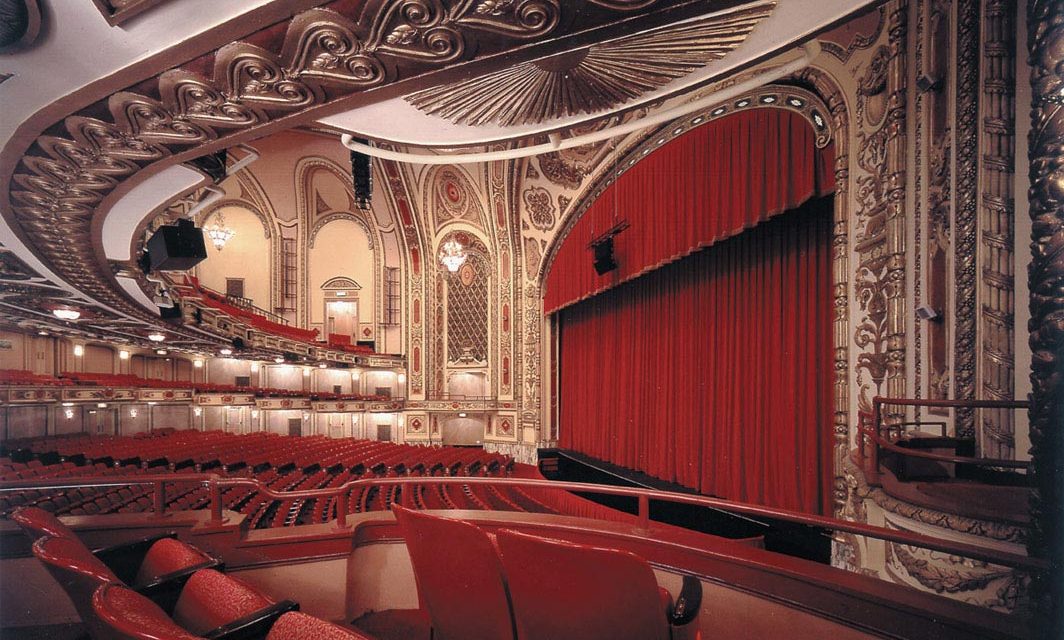 With their crystal chandeliers, red-plush décor, murals, statuary, acres of gold-leaf plasterwork and “mighty Wurlitzer” pipe organs, these monumental edifices transported us to another place and time. One historian labeled the old-time movie palace “an acre of seats in a garden of dreams.”

The sumptuous auditoriums of yesteryear, many of them actually fashioned after European or Asian palaces, were as escapist as the motion pictures being shown on their big silver screens. Though critics considered these temples of modern culture to be garish and extravagant, theater architects reveled in the artistic freedom they were allowed. Cinema mogul Marcus Loew, who formed MGM Studios in 1924 and headed the Loew’s theater chain, insisted: “We sell tickets to theaters, not movies.”

Sadly, many of the palatial downtown movie houses from Hollywood’s heyday in the 1920s and ’30s have been plowed under to make way for parking lots and office buildings. But some have survived and been turned into performing arts centers. Whenever I travel to a new city, I like to poke my head into one of those restored picture palaces—to grab a peek, see a show or take a tour.

Last weekend I took a short drive from my suburban home to downtown Chicago for the weekly “Historic Theatre Tour” offered by Broadway in Chicago. The 75-minute walking tour of two Loop theaters is offered every Saturday at 11 a.m., but it can be arranged for a group at any time. Conveniently, the theaters usually visited—the Oriental and Cadillac Palace—are right down Randolph Street from each other. Sometimes the Bank of America Theatre (formerly the Shubert and LaSalle Bank theaters) is substituted, but it’s only three blocks from the other two.

On my tour of the Oriental and Cadillac Palace, our guide pointed out architectural flourishes, shared staging and seating secrets, and regaled us with celebrity lore, but we were not taken on or behind the stage. 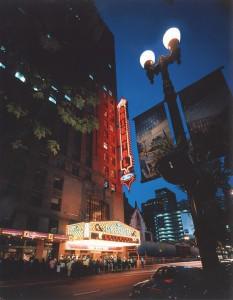 The Oriental Theatre, officially the Ford Center for the Performing Arts since its 1998 renovation funded by Ford Motor Co., opened in 1926 as a movie house operated by the Balaban & Katz chain. Decorated in Asian motifs, from lantern-like chandeliers, stained glass and lotus blossoms to intricately carved figures of goddesses, slaves and Buddha, the cavernous space was designed by George and Cornelius Rapp, who built other grand movie theaters in Chicago and elsewhere. It was in the balcony where we could best admire the gaudy decoration—almost every inch of the walls and ceilings are covered in gold-painted reliefs.

The theater was built for 3,300 people and boasted an average daily attendance of 7,800. During a program that would last two or three hours, patrons would see cartoons, a newsreel, movie shorts, a song and dance revue and a feature film. In summer, many found the Oriental a cool refuge as movie theaters were among the first public places to offer air-conditioning. According to our guide, Richard, wallets and purses tossed by pickpockets were found in the air-conditioning vents during the restoration. 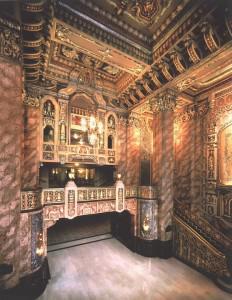 He noted that the columns and walls resembling antique marble were actually done in scagiola, a paint job that imitates the real thing. Some of the lighting fixtures are original, but others were added in the $28-million renovation in 1998 (after being shuttered since 1981). “If it looks like Home Depot,” Richard said, “it is Home Depot.”

The renovation resulted in the theater losing 1,000 seats—more lobby space was needed to accommodate crowds during intermission between acts. The dark red seats have been replicated with the original fabric, but they are now wider because people are.

Richard pointed out that the box seats closest to the stage, on the Dress Circle level, are hardly the best seats in the house. Because of the limited view, they are sold last. But the boxes, considered prestigious for well-to-do families, were a place to be seen. Everyone seated in the Dress Circle could enjoy the exclusive lounge just outside the doors. Now the area is just an upper lobby space to mill about.

On the main floor we had a chance to peer into the orchestra pit, and Richard described the stage’s three basement levels. The theater’s original organ (not in working order) is on display in the lobby’s lower level, which now houses the bathrooms.

Among the stars who graced the Oriental’s stage were Al Jolson, Cab Calloway, Duke Ellington and the Three Stooges. During the 1933-1934 Chicago World’s Fair, the marquee advertised the “3 Glumm Sisters,” misspelling the last name of singer Frances Gumm (later Judy Garland) and her sisters. The theater manager suggested a more inviting name, so the group became the Garland Sisters. 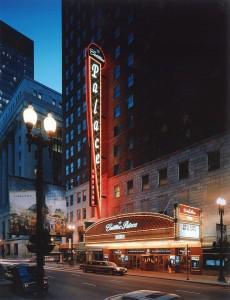 The Cadillac Palace Theatre, born as the New Palace Theatre in 1926, also was a movie house for many years but started as a vaudeville venue, attracting such stars as Bob Hope, Jimmy Durante, Mae West and Jack Benny. Like the Oriental, it was designed by the Rapp Brothers. But instead of Asian splendor, they went for a lavish French Renaissance and Baroque look, taking features from the palaces of Versailles and Fontainebleau. The marble here, imported from Italy, is real. When the Palace opened, one critic wrote, “This is the most ideal theatre I’ve yet seen in this country or abroad.”

In the late 1950s the Palace was the only theater in the Midwest set up for Cinerama (like the IMAX of its day). In the 1970s the theater (known as the Bismarck) was used for banquets and conferences and became a concert venue in 1984. (The attached Bismarck Hotel is now the Hotel Allegro.) After a $30-million makeover the grand auditorium reopened in 1999 with the world premiere of Elton John’s and Tim Rice’s AIDA. 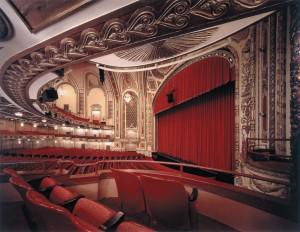