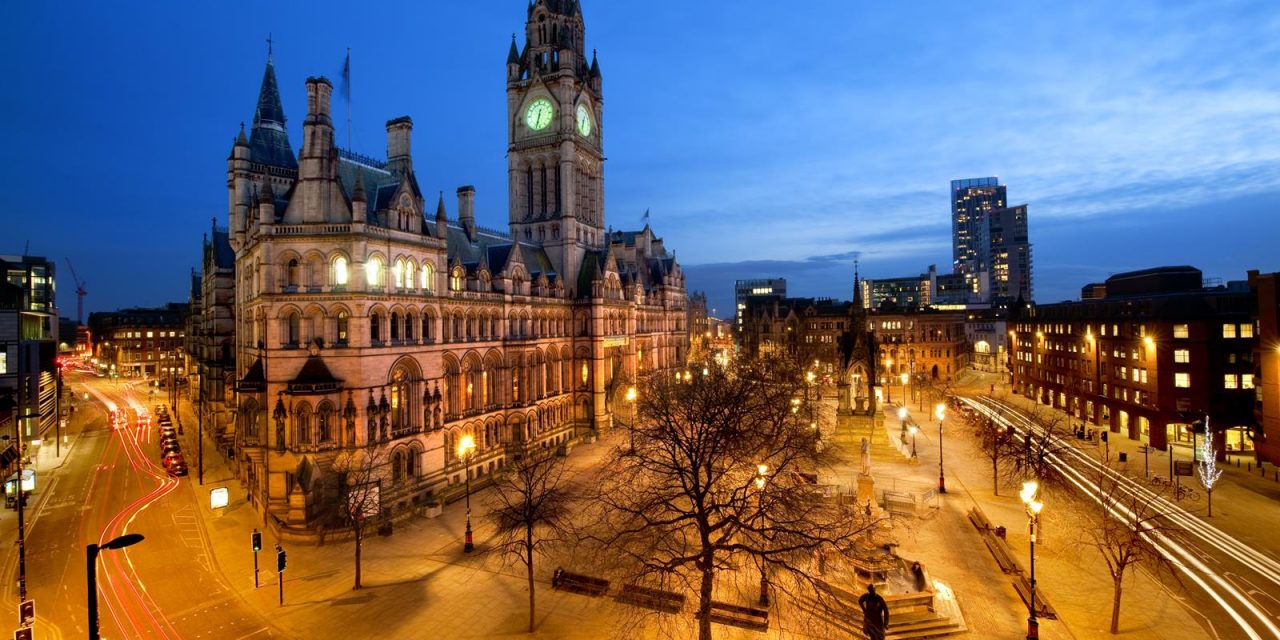 For me, Manchester was a blank slate. As a first-time traveler from America, I didn’t have many preconceived notions of this city in Northern England, though I did know that it was the birthplace of the Industrial Revolution and home to the world’s most famous soccer team—Manchester United.

Unlike other cities on the English tourist circuit, Manchester has no iconic sights, at least in the minds of international travelers. It’s not famed for its literary or royal connections. There’s little ancient history to soak in. 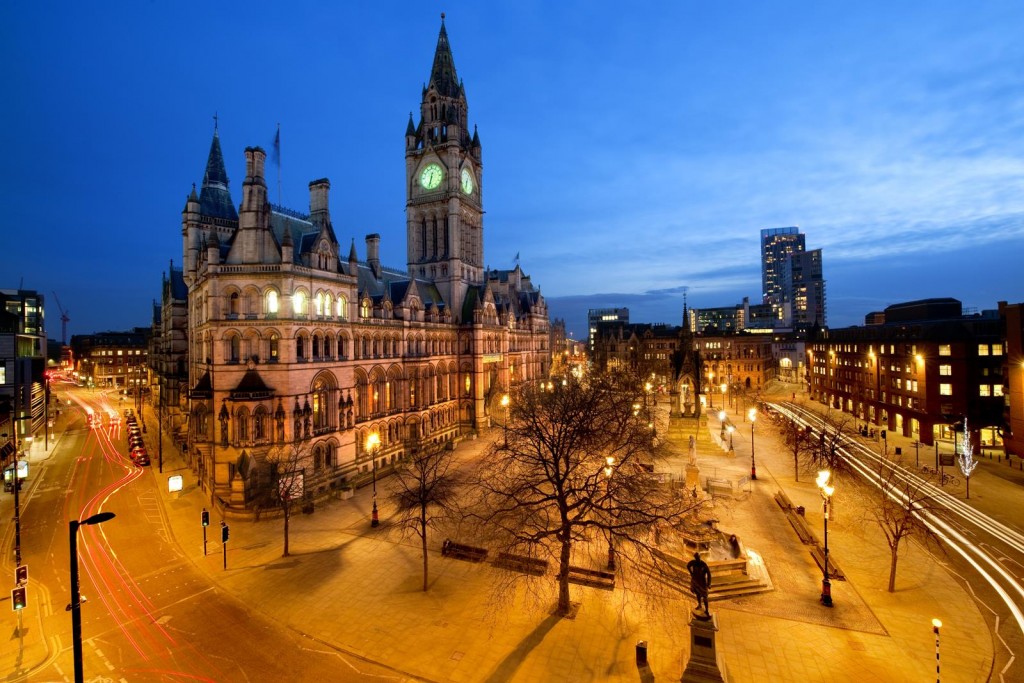 But the third largest city in the United Kingdom, with a metro population of 2.6 million and the busiest airport outside of London, abounds with fresh discoveries and kept me going nonstop for two full days. I wish I could have added a third. A contemporary British city on the cutting edge of technology, culture, fashion, cuisine, entertainment and sports—that’s Manchester’s appeal.

I had decided to start and end my one-week England trip in Manchester, rather than London, because American Airlines flights from Chicago were less expensive than going into the more intimidating Heathrow Airport. Plus, I just like choosing the less obvious options, places off tourists’ radar.

After taking the airport train into central Manchester, I was able to get everywhere by foot—none of the main sights was more than a short walk from the next. 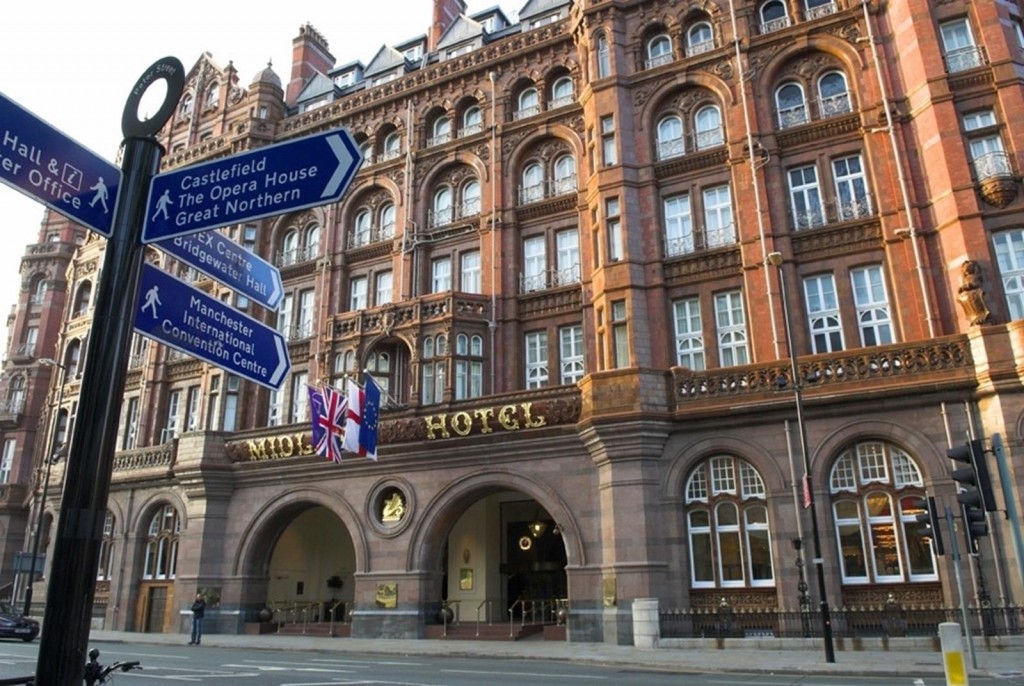 The classic Midland Hotel, a fashionable address in central Manchester

I wanted to start at the beginning of Manchester’s story, so I walked from my hotel (the historic and stylish Midland) to Castlefield Urban Heritage Park, a former industrial zone that’s now a quiet oasis of canals and cobblestones sprinkled with signboards recalling the area’s past, plus some Roman ruins. My chief destination: MOSI (Museum of Science & Industry), which occupies five 19th century buildings, four of them once part of Liverpool Road Station, the world’s oldest passenger railway station (built between 1830 and 1880 and finally closed in 1975). There are short train rides for museum visitors, though, at this corner of Manchester that saw the dawn of the transportation revolution.

As the catalyst for Britain’s industrial growth and a model for global advances in railway engineering, the trains hauled cotton and other raw materials from the Liverpool Docks to Manchester’s factories, and in the beginning also moved people. Said one early passenger: “We went like a shot from a gun. No sooner did we come to a field than it was a mile behind us.” 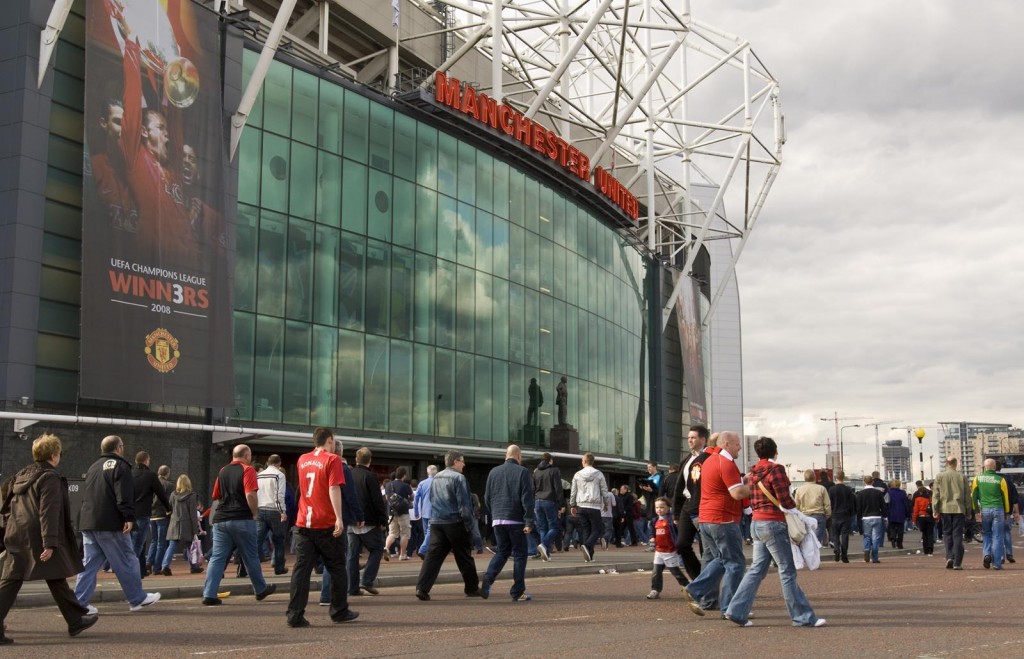 In those early days Manchester, nicknamed “Cottonopolis,” was at the heart of the largest center of cotton textile production in the world. MOSI’s Textile Gallery displays the massive machines that spun cotton into yarn and wove yarn into cloth. In a demonstration of the spinning mule an interpreter told our group about the horrific working conditions and how orphans, hired as scavengers to clean debris off the floor under the machines, were often crushed to death by the moving parts.

In the museum’s Power Hall are examples of early steam engines and locomotives. A former market building across the street features air and space innovations. And don’t miss “The Making of Manchester” exhibit in the old Station Building. It tells the city’s story from Roman times to the present. The British Cycling team, I learned, is based at Manchester’s National Cycling Center, an Olympic-standard velodrome built in 1994.

Manchester’s reputation for many years suffered from a grim industrial landscape, but today the city gleams with a modern skyline, the result of massive redevelopment since the late 1980s. Beetham Tower, on the edge of the Castlefield district, is the city’s tallest building at 47 stories (half of them occupied by the Hilton hotel) and the tallest in Britain outside of London. Much of the new construction was kick-started after an IRA bomb devastated part of the city center in 1996.

While I like the forward-looking attitude of 21st century Manchester, I also enjoy the old architectural treasures, from the neo-Gothic Town Hall to the glorious Victorian-era warehouses and commercial buildings that have been converted to new uses.

Setting the stage up for 1984 at the Royal Exchange Theatre, Manchester

One of my favorite buildings—definitely worth a look inside as you explore the central retail district—is the 1874 Royal Exchange. Its Great Hall housed the trading floor of the Cotton Exchange and now is home to cafes and the Royal Exchange Theatre, a theater-in-the-round inside a glass module plopped right in the middle of the domed building, a grand space with red granite columns capped with Corinthian capitals. Backstage tours are available 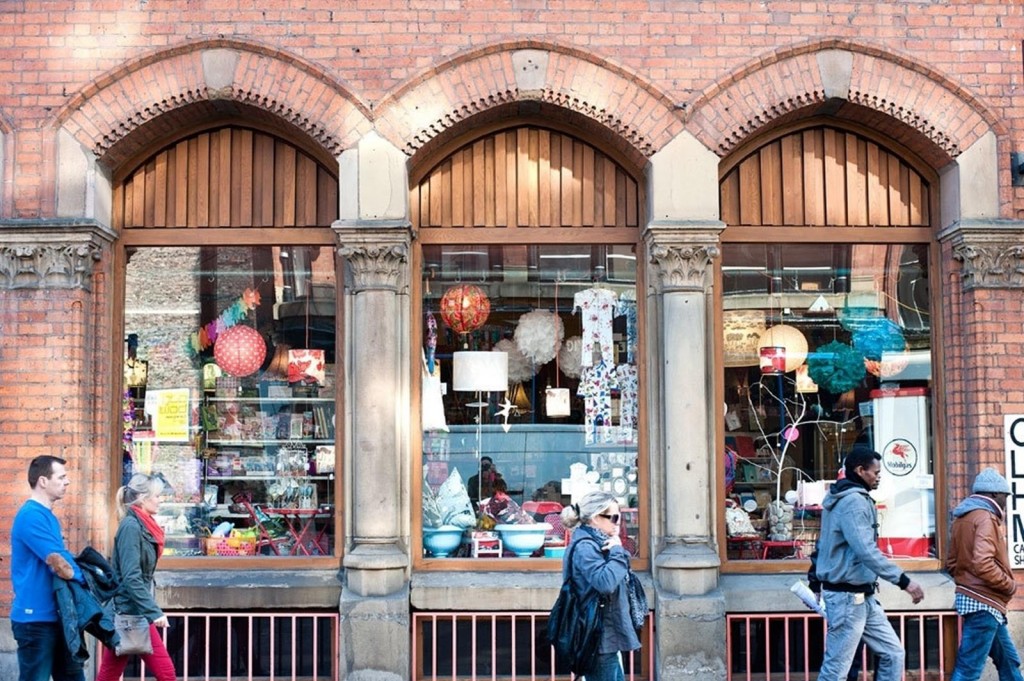 Just down the street are upscale department stores Selfridge’s and Harvey Nichols, and there’s a Marks & Spencer’s nearby. Arndale Centre, an enclosed mall with 200 stores and restaurants, anchors the shopping district and proclaims itself “The Centre of Everything.” It abuts the Northern Quarter, a once derelict area that now buzzes with a bohemian vibe. Formerly a wholesale market hub, the Northern Quarter abounds with specialty retailers, music clubs, and fun restaurants and cafes.

Also neighboring the Arndale Centre is the 19th century Corn Exchange, a former shopping center being redeveloped as a culinary haven. It will open this summer with a variety of restaurants, including a Brazilian steakhouse and Vietnamese noodle joint. Next door, the small medieval quarter encompasses two historic pubs (Wellington Inn and Sinclair’s Oyster Bar), which are just steps from Manchester Cathedral, noted for the exquisite woodwork in its 16th century choir stalls. 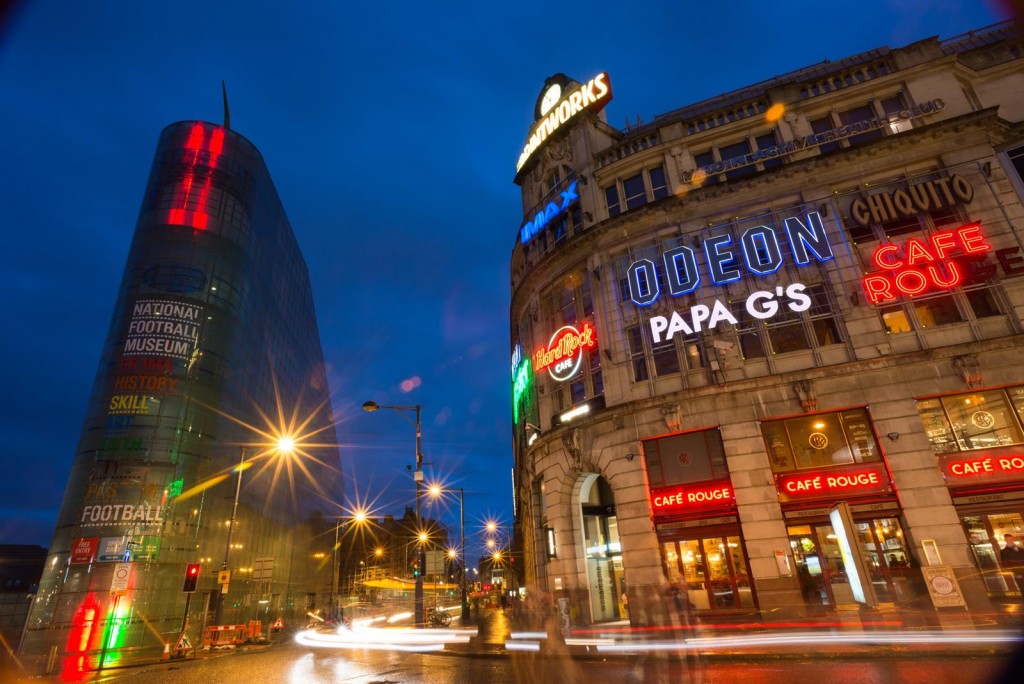 The five-story National Football Museum, just across the square from Manchester Cathedral, is practically a cathedral itself. A striking triangular building sheathed in glass, it opened in 2012 as a shrine to England’s national sport and boasts the world’s largest football (soccer) collection. Covering everything from fandom, mascots, trading cards and stadiums to great moments in the sport, exhibits feature video clips, artifacts and touchscreen computer stations. Both Manchester United and the newer Manchester City football club have their own museum and offer stadium tours. The new Hotel Football, owned by former Manchester United players, just opened next to the club’s stadium, Old Trafford. 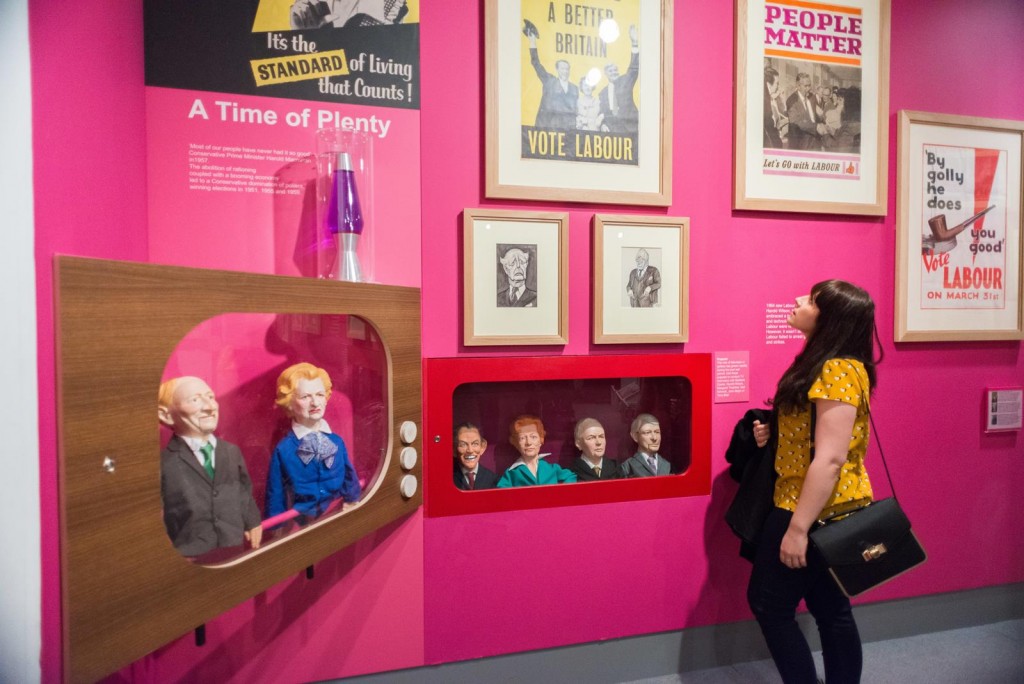 The People’s History Museum appeals to the politically-minded.

In this city that brought great wealth to captains of industry, the struggles of the working class grab the spotlight at the People’s History Museum. Situated by the River Irwell just blocks from all the shops, this excellent museum looks back at the first protests for better working conditions, the growth of trade unions, and the development of socialism and Communism, all told from a left-leaning political perspective. Filled with political posters, banners and cartoons, it also chronicles the fight for voting rights and women’s suffrage, early peace movements, and the birth of the welfare state in Britain engineered by the Labor Party after World War II.

My Manchester visit concluded with a stay at the sleek Radisson Blu Hotel Manchester Airport, a short walk (mostly indoors) to my departure gate and the flight home to Chicago. It also was an easy walk from the airport train station after the 20-minute trip from central Manchester.

I’ve never had anything but superior experiences at Radisson Blu hotels, and this was no exception. The only hotel connected to the airport terminals, it offers a health club with pool, steam room and sauna. My room, with a purple, mauve and gray color scheme, was decorated with black-and-white, airplane-related art. The hotel’s street address? ChicagoAvenue.