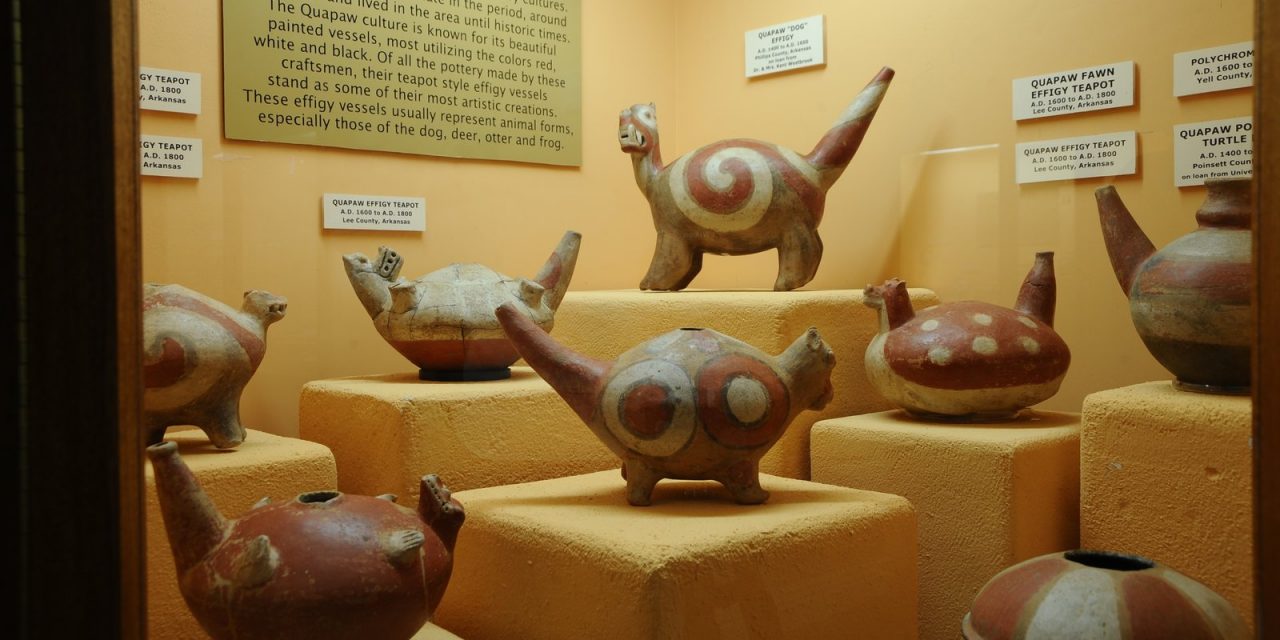 Explore museums, state parks and other places that preserve the region’s native cultures

Derived from the Quapaw word meaning “southern place,” Arkansas was inhabited by five distinct Native American civilizations for millennia before European settlers arrived in the 16th century. These cultures were nearly extinguished from centuries of Western disease and forced relocation, but their traditions and art are still accessible throughout the state. Museums, historic sites and tribal centers all welcome visitors to experience these cultures.

Thirty minutes southeast of Little Rock is Toltec Mounds Archaeological State Park, a heritage site that preserves the work of a culture known as the Plum Bayou people. Believed to have occupied the area between 650 and 1050 A.D., they used these earthen embankments for civic events and religious ceremonies. While only three mounds survive, the area was originally a large 18-mound government complex that aligned with the solstice and equinox and was surrounded by an eight-foot-tall ridge that remains. Groups can enjoy the park’s two trails, Mound Pond boardwalk and Plum Bayou Garden, a living demonstration of the plants and raw materials the ancient people drew upon for food and medicine. 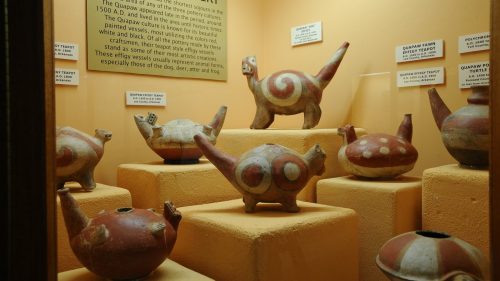 Farther north is Parkin Archaeological State Park, believed to be the remains of the city Casqui and site of a meeting with Spanish explorer Hernando de Soto in 1541. Located at the fertile confluence of the St. Francis and Tyronza rivers, the village was an important trading hub for the Mississippian
people who occupied modern-day northern Arkansas. Park rangers can accompany groups to show how the city was divided into “neighborhoods,” explain the ancient sport of chunkey and indicate areas of ongoing excavation and research. The accompanying visitor center includes an interpretive costume
area, auditorium and exhibits filled with rare Spanish artifacts.

Groups who enter the free Museum of Native American History will embark on a journey that spans 14,000 years. Located in Bentonville—once a rich hunting ground for the Osage Nation—the museum features ancient artifacts belonging to Ice Age hunters, Mississippian pottery and elaborate artifacts from pre-Columbian Mayan and Incan civilizations. Audio wands are available for self-guided tours and will provide detailed information on blankets, woodworking tools and the Sweetwater Biface, a notable innovation in arrowhead design first perfected by the Caddoan Ozark tribes.

Named for the famous Cherokee linguist, the Sequoyah National Research Center in Little Rock is the largest assemblage of Native American expression in the world. Massive storage areas contain tribal newspapers, poetry, history books and paintings, with University of Arkansas at Little Rock faculty often on-hand to answer questions about the collection. The adjacent gallery houses rotating exhibits that showcase everything from childhood toys to medicine. Also in Little Rock is the Historic Arkansas Museum, a restored 1827 tavern that houses the permanent exhibit We Walk in Two Worlds: The Caddo, Osage & Quapaw in Arkansas. Representatives from the three tribes were consulted for this collection of 158 objects that runs chronologically and examines agriculture, art and spirituality in southeastern Native American culture.

The Ozark plateaus and Ouachita Mountains northwest of Little Rock feature pockets of rock shelters and caves inhabited by native peoples 8,000 years ago. A short quarter-mile hike will bring your group in touch with these ancient tribes with a walk through Rock House Cave in Petit Jean State Park. This hollowed-out archway contains over 100 pigmented images drawn on the walls and ceiling depicting bear claws, salmon and other animals of spiritual importance. A local guide can explain the lifestyles and art of ancient Ozark residents, and additional trails will pass by the Arkansas River and Lake Bailey fishing sites used by the tribes.

Unfortunately, Arkansas is also pocked by many reminders of the Trail of Tears, a tragic forced removal of Chickasaw, Cherokee and Seminole people from their native lands in the 1830s. Families were often separated or forced to walk hundreds of miles from the southeastern U.S. to modern-day Oklahoma through Arkansas Territory, and thousands died during the journey. Preserved reminders of that tragic chapter in American history remain throughout the state, most notably at Cadron Settlement Park. This preserved military settlement sheltered a group of emigrating Cherokees who were struck by a cholera epidemic, and the site includes over 50 unidentifiable Native American graves. The property also includes a trading post and Trail of Tears exhibit that explains Arkansas’ involvement in the Indian Removal Act.

Groups further interested in Trail of Tears history should visit Little Rock’s Mount Holly Cemetery, site of Quatie Ross’ gravestone. The wife of Cherokee chief John Ross, Quatie died near Little Rock in 1839 when she gave her blanket to a freezing child. Her original gravestone remains along with a memorial, where your group can leave sacred tokens in the Cherokee tradition. For a more in-depth exploration of 19th century Native American life, consider the National Park Service’s Trail of Tears National Historic Trail. The route shadows the path refugees walked nearly two centuries ago, from the Delta Cultural Center along the Mississippi River to Fort Smith National Historic Site on the Arkansas-Oklahoma
border.