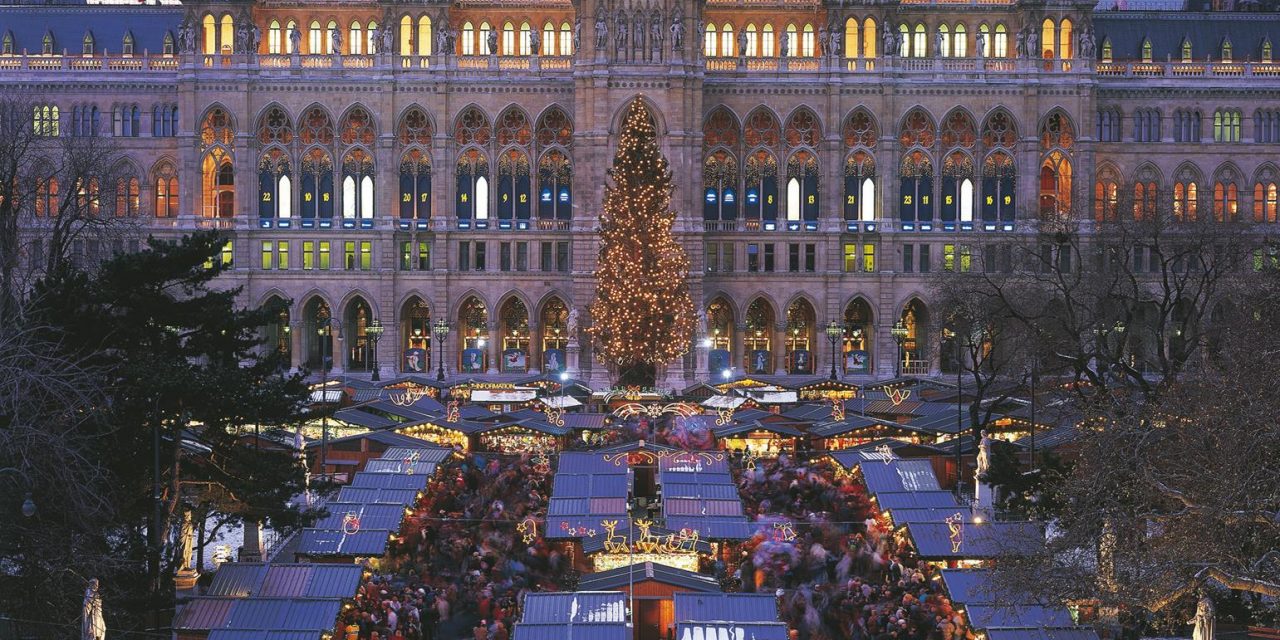 Snug little stalls trimmed in evergreen garlands and twinkly lights…roasted chestnuts and spiced wine…joyful music and happy people all around. What better way to get into the spirit of the season than a cruise featuring the Christmas markets of Central Europe.

Every November and December, these temporary shopping villages take over the hearts of centuries-old cities enchanting in their own right. Many Christmas markets are situated on central squares fronting a magnificent church, palace or other landmark.

On port calls in Germany, Austria and Hungary last December, I and fellow passengers on the 156-passenger Scenic Amber immersed ourselves in the yuletide magic while nibbling goodies, imbibing warm beverages and shopping for gifts from vendors in their cozy huts. 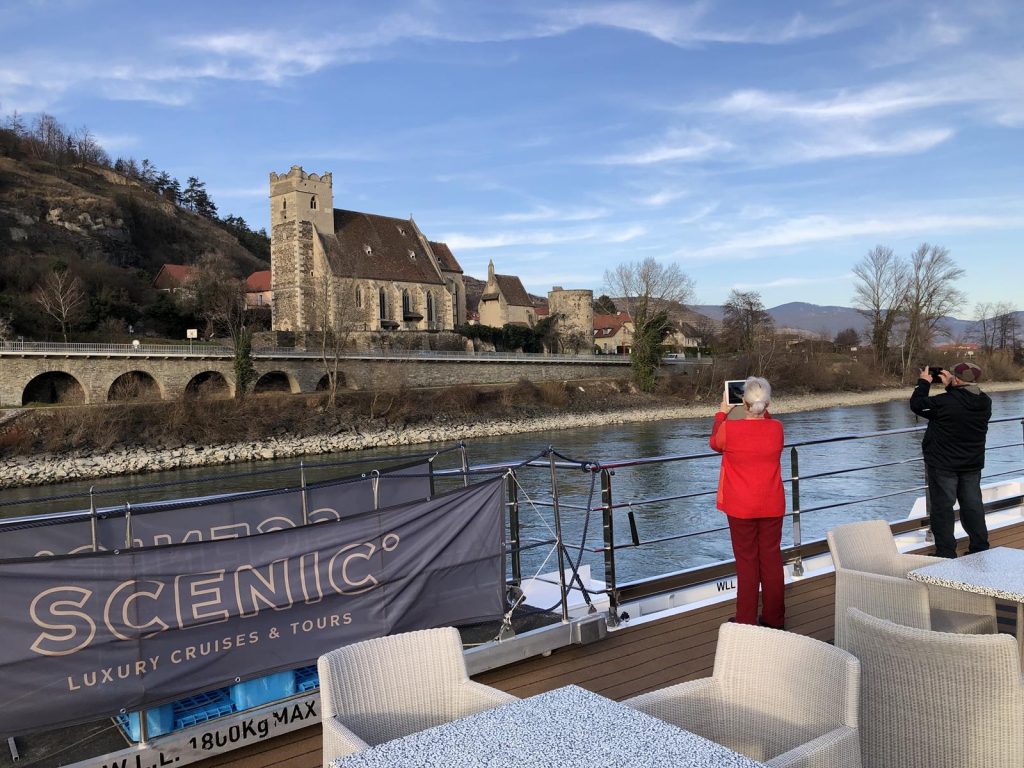 Besides merriment ashore, the conviviality onboard, in keeping with the season, seemed to be turned up a notch. Richard Grey, our jolly English cruise director, set the tone, as did the rest of the staff, most of them from Eastern Europe.

At most destinations we had a choice of three or four tours, with one or more including a seasonal market. With Christmas Day gift giving just days away, we felt a heightened sense of mission prowling the lanes of stalls filled with foods and handicrafts distinctive to this part of the world.

Our one-week “Danube Christmas Markets” adventure on the Scenic Amber, one of 13 river ships operated in Europe by Scenic Luxury Cruises & Tours, started, appropriately, in the Bavarian city of Nuremberg (pop. 530,000), home to Germany’s biggest and most famous Christmas market. We then sailed to Regensburg and Passau before calling at four Austrian cities—Linz, Melk, Dürnstein and Vienna. The holiday fling ended in Budapest, Hungary, two days before Christmas. 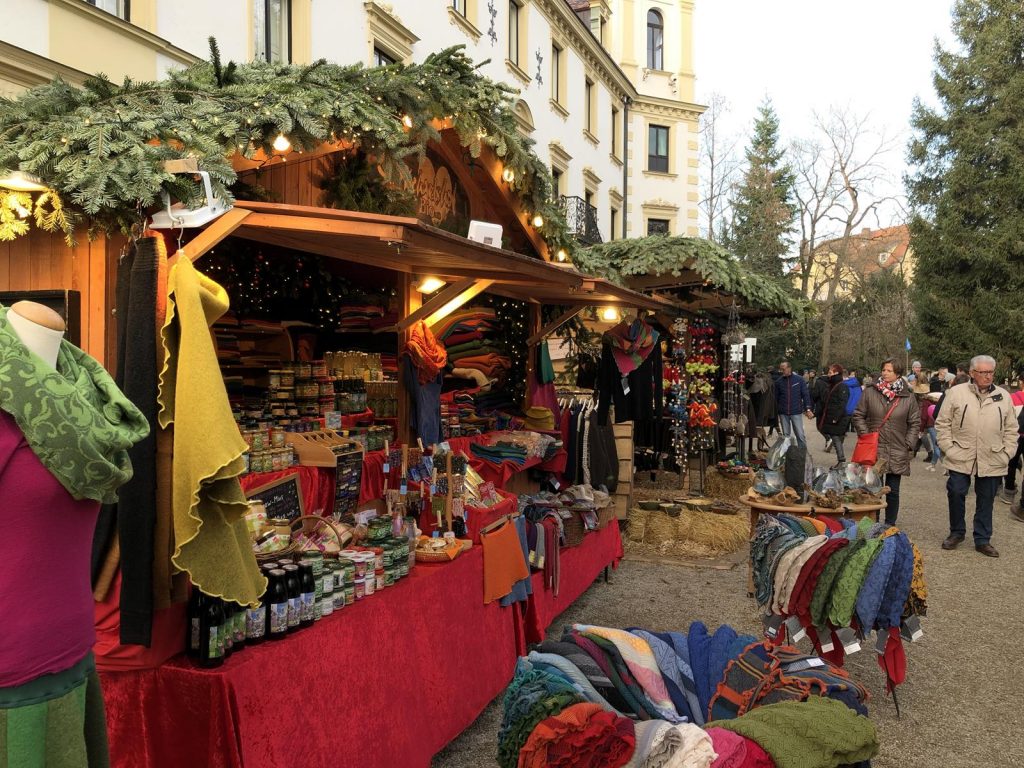 Come Advent season in Nuremberg’s Old Town, row after row of huts trimmed in candy cane-striped awnings crowd the cobbled plaza by the Church of Our Lady. Many Scenic Amber passengers took the city tour that included the Christkindlesmarkt, a Nuremberg tradition since 1628. Drifting among the 170 stalls, they shopped for handmade ornaments, wooden toys, nutcrackers, candles, soaps and other artisan wares. Among the must-try foods and drinks: wine mulled with spices like cinnamon and cloves (Glühwein), finger-like Nuremburg bratwursts, and all shapes and sizes of the highly spiced gingerbread (Lebkuchen) made with honey, oats and ground nuts (little flour, if any). One tour option featured a gingerbread-baking class. 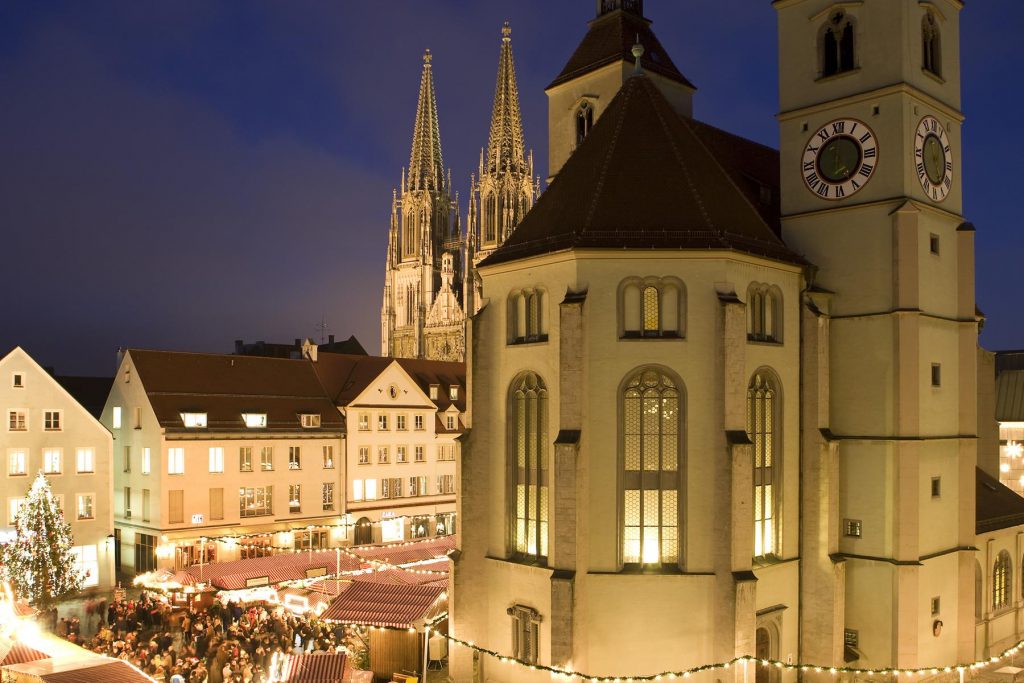 Christmas market in the main square of Regensburg, Germany.

Regensburg, 53 miles downriver from Nuremberg, boasts Germany’s largest medieval district, the perfect backdrop for Christmas shopping. Scenic-arranged walking tours in Regensburg’s Old Town offered the option of holiday markets in the main square or at St. Emmeram Palace, the ancestral home of Regensburg’s princely Thurn und Taxis family. Every year the family, the largest private landowner in Germany, hosts a first-rate market. My group had time to peruse the stalls before and after a tour of the palace, an important monastery in the Middle Ages.

Around the courtyard’s Christmas tree and across the grounds, wood fires kept us warm as we stood at tables with hot drinks (though the outdoor temperature that afternoon was a not-so-bad 48 degrees). Each tour member received a voucher good for one cup at a Glühwein stand. Throughout the cruise, passengers had fun collecting these souvenir cups inscribed with the year and name of the market (instead of returning them for the deposit). With my blueberry-flavored wine I had a piece of chocolate-covered gingerbread with almonds. If only there had been room in my tummy for the crepes or waffles, the hot chestnuts or candied mixed nuts, or the apple strudel in vanilla sauce.

Every merchant’s stall at the Thurn und Taxis estate offered something different, whether it was colorful knitwear, Russian stacking dolls or carved-wood Nativity sets. As the sun set, the marketplace turned into a wonderland lit by candles, lanterns and torches. A brass band entertained from a courtyard balcony. 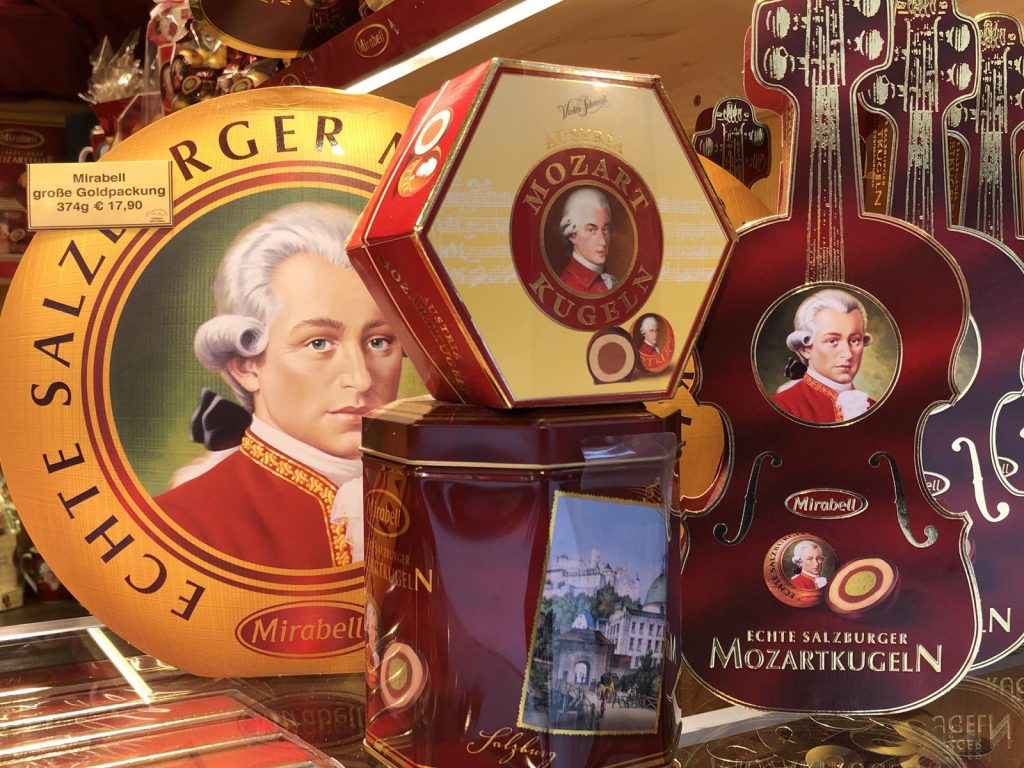 From the German city of Passau, 85 miles southeast of Regensburg, cruise passengers boarded tour buses for Salzburg, Austria, or Cesky Krumlov, a picture-perfect Czech town with hilly medieval streets. Having gained an affection for Salzburg while living there as a student long ago, I chose Salzburg.

After all these years, Salzburg’s Old Town, with its fairy-tale castle perched high above, looks just the way I remember it. And the city still plays up its ties to The Sound of Music, the 1965 movie classic starring Julie Andrews, as many scenes were filmed in Salzburg and environs, home base of the singing von Trapp family.

Our Old Town walking tour featured Sound of Music locations, beautiful churches and the city’s other big claim to fame—the birthplace of Wolfgang Amadeus Mozart. For old times’ sake, I bought a bag and box of Mozartkugeln—balls of dark chocolate-coated candy layered with pistachio marzipan and dark and light praline cream. Each piece is wrapped in gold foil bearing the composer’s portrait.

You’ll find Mozartkugeln at the Salzburg Christmas Market, where, after lunch, we had time to browse the huts clustered on squares fronting the Cathedral and Residenz, the 17th-century palace of Salzburg’s prince-archbishops. Lunch was not just anywhere—Scenic reserved for us one of the 11 vaulted dining rooms at the oldest restaurant in Europe, St. Peter Stiftkulinarium. Ensconced in the cave-like cliff by the sumptuously Baroque St. Peter’s Abbey, it has been dishing up food since 803.

From Salzburg, buses took us to Linz, where our ship was waiting to welcome us back. Instead of having dinner onboard, I walked over to the Christmas market in the main square, 10 minutes away.

The Scenic Amber’s lounge, decked out for the holidays during our December sailing, bubbled with Christmas cheer when we gathered for port talks, entertainment and games. It didn’t hurt that alcoholic drinks were complimentary day and night. (A Scenic cruise is all-inclusive, meaning the fare covers beverages, meals, shore excursions, Wi-Fi, gratuities and airport transfers.) Brought onboard to perform after dinner were a Bavarian brass band and Austrian and Hungarian folk dancers. One night passengers split into teams for Christmas trivia.

The ship’s dining room served specialties representative of the countries we visited. Among choices on our dinner menu in Vienna, for example, were wiener schnitzel and apple strudel. A mini-smorgasbord in the lounge that night presented more Austrian favorites—pretzels and pretzel rolls, goulash soup, frankfurters with mustard,  and Kaiserschmarren (shredded sweet pancakes) with applesauce.

The majority of passengers on our sailing were Americans. Other guests came from Australia, Canada and Japan. 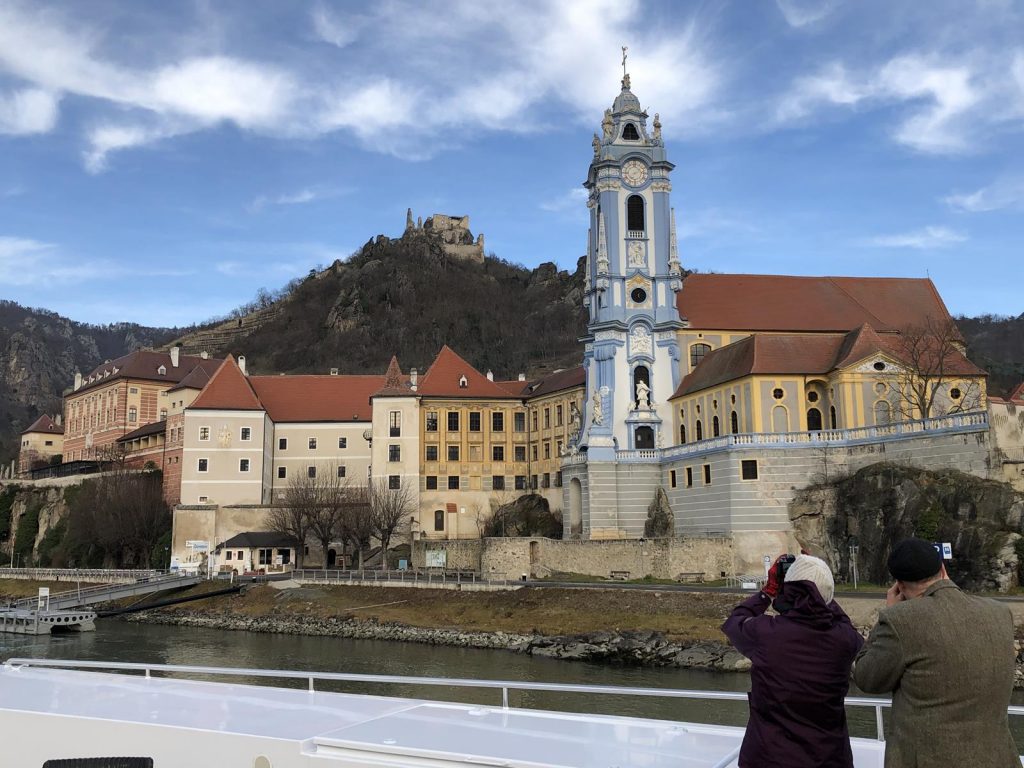 After Linz, our next stop was Melk, where we had a morning tour of Melk Abbey, a majestic Baroque building overlooking the Danube. On the way to Dürnstein, a charming Wachau Valley village two hours from Melk, we had one of the few daytime chances to go out on deck and watch the scenery pass by. It was cool and breezy, and for the first time on the trip I took out my hat and gloves. In Dürnstein, noted for its romantic castle ruins perched above town, we had two hours to shop and poke around the cobbled lanes.

Our day in Vienna was split between morning excursions and afternoon free time. I opted to visit Schönbrunn Palace, the 1,441-room summer home of the Hapsburg rulers. After an hour touring the Royal Apartments, there was time for shopping and noshing at the extensive Christmas market in the forecourt. Some of us went to the apple strudel-making demonstration (“Strudelshow”) in the palace’s cafe building. 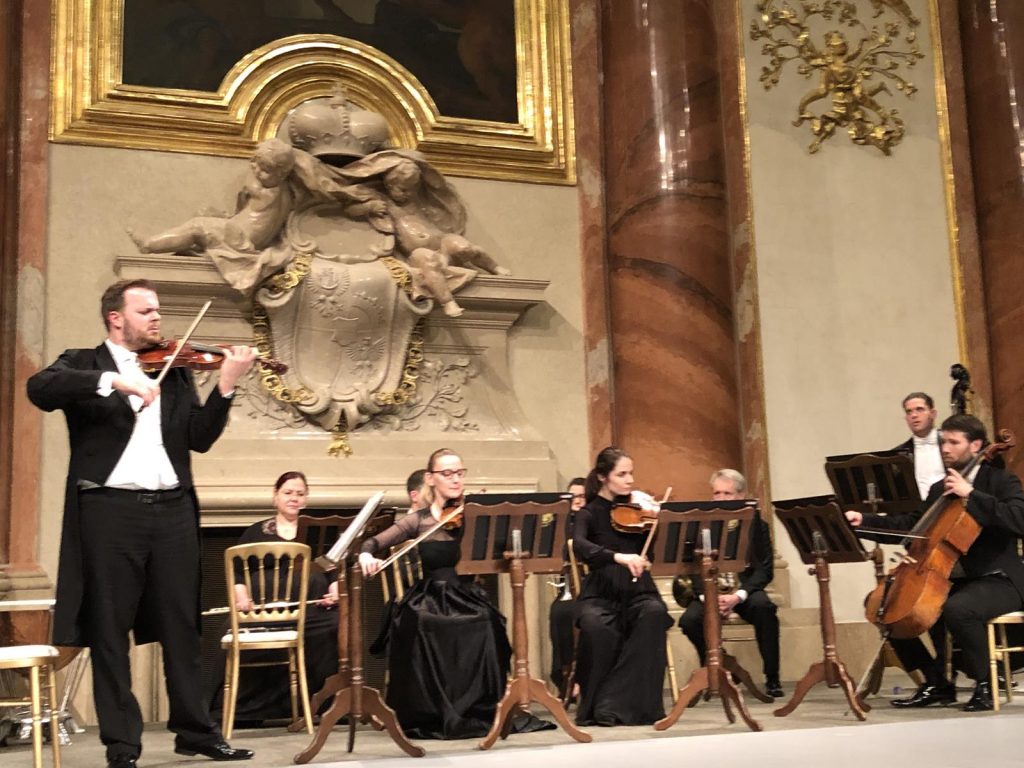 It started raining just after we left Schönbrunn, but rather than head back to the ship, I toughed it out, umbrella in hand, and spent the next five hours exploring Vienna’s history-rich Inner City. The weather dampened some plans but not mine, as I was determined to see the monumental sights remembered from visits long ago. Many of them hosted outdoor Christmas markets, which were bustling despite the soggy weather. One collection of huts surrounded St. Stephen’s Cathedral, a Vienna icon with its soaring spire and mosaic roof.

In a city synonymous with classical music and timeless elegance, what better way to close out a great day than with a Champagne reception and evening concert at the aristocratic Palais Liechtenstein. Indeed, our Vienna visit reached a crescendo when the 10-piece Vienna Imperial Orchestra played exclusively for Scenic travelers in a palatial room crowned with a celestial ceiling. Besides orchestral selections like Mozart’s “A Little Night Music” and “Voices of Spring Waltz” by Johann Strauss, we were entertained by operatic singers and a ballet duo.

Rain followed us to Budapest, our final stop, where the Scenic Amber docked across from the Hungarian Parliament, the grandiose landmark often shown on river cruise brochures and TV commercials. After the “Jewish Heritage” tour, I had free time to check out the Christmas market by St. Stephen’s Basilica, then ventured inside the massive church to find a Christmas-themed service being conducted, curiously, in English.

For our final dinner onboard, we had marvelous views of the floodlit Parliament, a lasting memory of a great city and the best gift Santa could deliver—a Christmastime cruise through the heart of Europe.

Now is not too early to book a Christmas cruise for 2020; our ship sailed full. Scenic’s eight-day “Danube Christmas Markets” sailings between Nuremberg and Budapest depart December 3 and 10, with prices starting at $3,745 per person. Also available are Christmas cruises on the Rhine and Rhine/Danube combos. For details, contact Scenic Luxury Cruises & Tours, 844-277-9029; scenicusa.com.