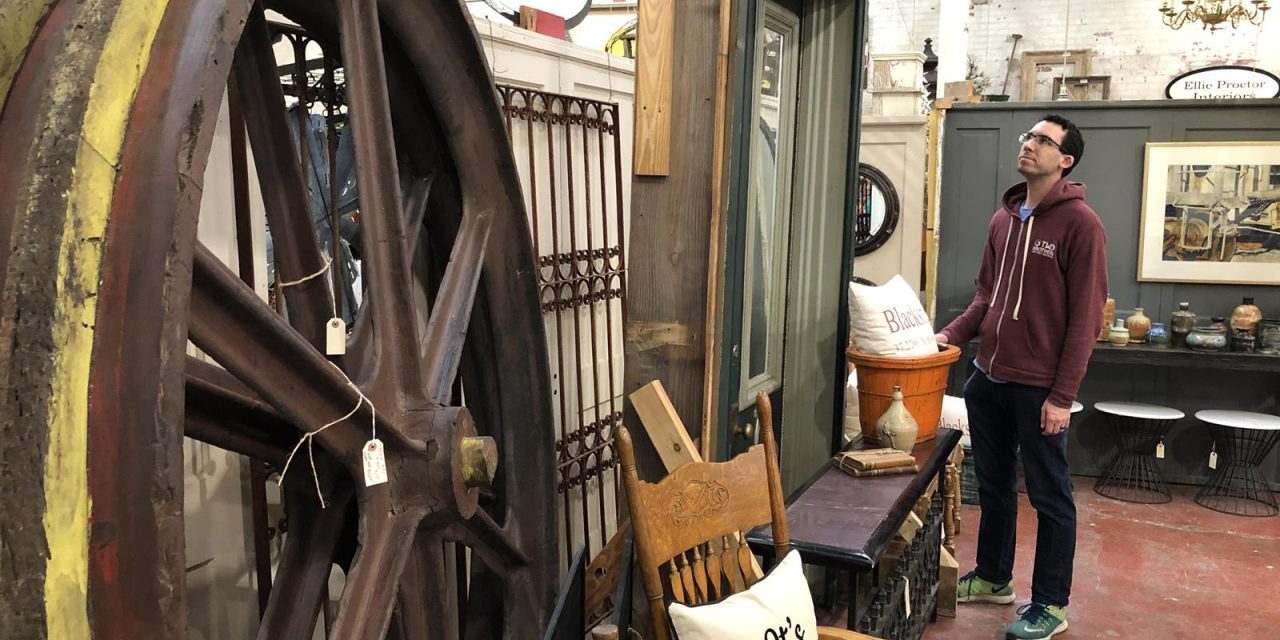 The Blue Ridge Mountains provide a pretty backdrop for attractions of national significance, including places that honor great Americans

There couldn’t be a better base of operations for exploring the Blue Ridge Parkway, Roanoke and other towns than Peaks of Otter Lodge. Overlooking a lake and three mountain peaks collectively known as the Peaks of Otter, the 63-room lodge is the only hotel directly on the parkway in Virginia.

Using Peaks of Otter Lodge for a hub-and-spoke itinerary, one can tap into pockets of national history just a short drive away as well as the scenic splendor of the Blue Ridge Mountains. Here are just a few of the adventures that await:

Let’s start with what’s right outside your hotel door and investigate one of the most popular parts of the Blue Ridge Parkway, a national scenic byway that stretches 469 miles from Virginia’s Shenandoah National Park to Great Smoky Mountains National Park in North Carolina and Tennessee. Abbott Lake, viewable from your balcony or patio and from the lodge’s Lake View Dining Room, can be circled on a .8-mile path, and a National Park Service visitor center/gift shop is a short walk from the lodge.

One hiking trail leads to Johnson Farm, where living history demonstrations at a log cabin home convey a sense of pioneer life in the Appalachians. The really ambitious can climb to the 3,875-foot summit of Sharp Top Mountain, one of the three Peaks of Otter (the other two are Harkening Hill and Flat Top). There also is a shuttle bus to Sharp Top.

After an active day outdoors, the lodge’s reception/restaurant building, with its soaring rafters, wood floors and rustic barn-board decor, makes a cozy refuge. Mounted deer and elk heads, along with an antler chandelier, accent the lobby. Leather couches and armchairs by the fireplace beckon travelers to the Peaks Lounge & Bar.

The patriotic town of Bedford, population 3,000, is home to one of the nation’s most impressive military shrines. The National D-Day Memorial, on the highest hill in town, salutes the valiant Allied forces that stormed the beaches of Normandy, France, on June 6, 1944, during World War II. The invasion, the largest amphibious assault in history, led the way to victory over Nazi Germany but at great cost. More than 9,000 Allied soldiers were killed or wounded. 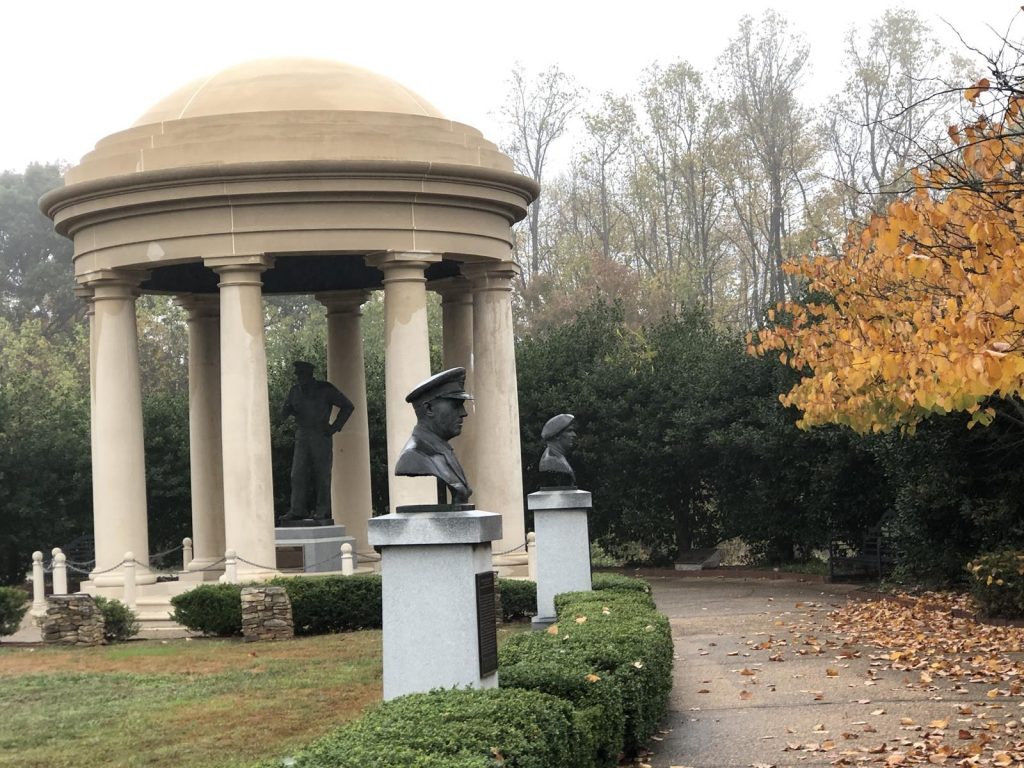 The memorial is located in Bedford because this small community lost more men per capita in the pivotal battle than any other place in the nation. Of the 32 Bedford County soldiers who fought that day, 20 did not return. Some of the men are buried in town, others in France.

A 10-minute History Channel video at the Bedford Area Visitor Center provides a good introduction to the D-Day invasion. One-hour tours of the memorial are available, or visitors can walk around on their own to read the plaques and view the various monuments, including statues of generals Dwight Eisenhower and Omar Bradley.

The names of the 4,413 Allied servicemen killed are inscribed on bronze tablets that surround the memorial’s largest component, Elmer T. Gray Plaza, which contains a sculptural tableau of Allied soldiers landing on the beaches and scaling the cliffs. The word “Overlord,” the military name given to the crucial operation, embellishes a 44-foot-tall arch at the center.

To learn more about the local men who made the ultimate sacrifice, visit the Bedford Boys Tribute Center in Green’s Drug Store. Or pick up a “Bedford Boys Homefront Tour” brochure, which directs you to where the Bedford Boys spent time before going off to war and sites that were important in town during World War II.

Tour buses are welcome at Bedford County orchards. Johnson’s Orchards, with about 5,000 apple trees, offers u-pick apples, visits with farm animals, and a store stocked with jellies, jams, butters, relishes, honeys, cider and its own fruit wines. The winery is one of six on the Bedford Wine Trail.

A short drive east of Bedford, on the way to Lynchburg, is an often overlooked attraction—an octagonal, Palladian-style villa the third president of the United States designed himself. Considered Thomas Jefferson’s architectural masterpiece, the home at Poplar Forest served as a retreat for the statesman and creative genius, a place to escape the public scrutiny he had to endure at his Monticello home in Charlottesville, 75 miles to the northeast. After his presidency, he came to Poplar Forest—a tobacco plantation he and his wife had inherited in 1773 from her father—for weeks at a time to read, think and be with his granddaughters. 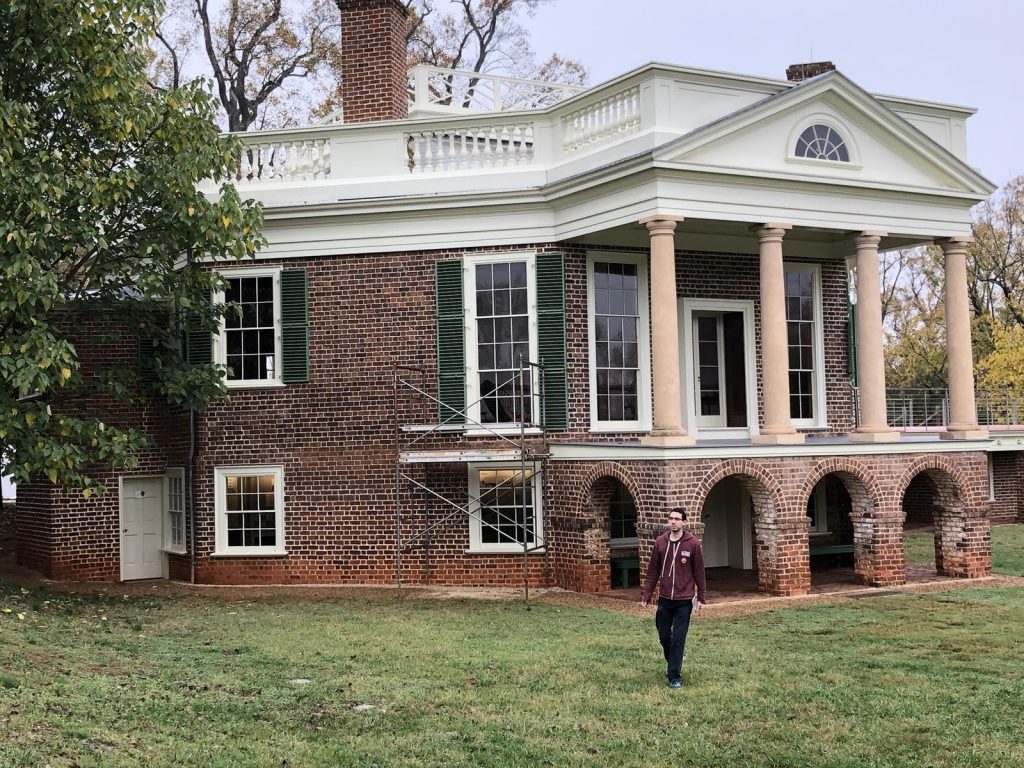 At the age of 63, during his second term as president, Jefferson began constructing the neo-classical home, which was completed in 1809. The Founding Father and author of the Declaration of Independence had longed to be out of the spotlight, to “detach myself from public life, which I never loved, to retire to the bosom of my family, my friends, my farm and books….” Jefferson’s last visit to the house was in 1823, three years before his death.

Poplar Forest, which had several owners over the years, was lost to history for generations. In disrepair, it was rescued from development by a non-profit corporation formed in 1983. The group purchased the house in January 1984, and in 1986 it was opend to the public for first time. Exterior restoration was done in the 1990s; interior restoration is nearing completion. Archaeological work on the estate continues to this day.

After a 10-minute video in the visitor center/gift shop, the house tour begins. Highlights include the dining room, a perfect cube (20 by 20 by 20 feet). The light, airy room features one of the first skylights in America. Visible through the tall windows are the Peaks of Otter. As emphasis of the restoration project is on architecture, there is no furniture on display, with the exception of Jefferson’s desk in the parlor. The lower level has exhibits on the home’s history and information on Jefferson’s slaves. Poplar Forest’s slave quarters housed as many as 94 enslaved men, women and children who labored in the fields, built roads, tended livestock and served as domestic staff. Some were brick makers, carpenters and other skilled craftsmen who constructed and maintained buildings on the plantation.

East of Roanoke, a National Park Service property preserves the farm site where a famous African-American was born into slavery in 1856. The story of author and educator Booker T. Washington, founder of the Tuskegee Institute in Alabama, is told through a 12-minute video in the visitor center and in living history demonstrations at buildings that replicate those found on a typical 19th century tobacco plantation. On a quarter-mile loop that travels through the buildings at Booker T. Washington National Monument, guests will see pigs in the pen, a demonstration tobacco field and tobacco drying in the barn. The site is near the town of Hardy and Smith Mountain Lake. 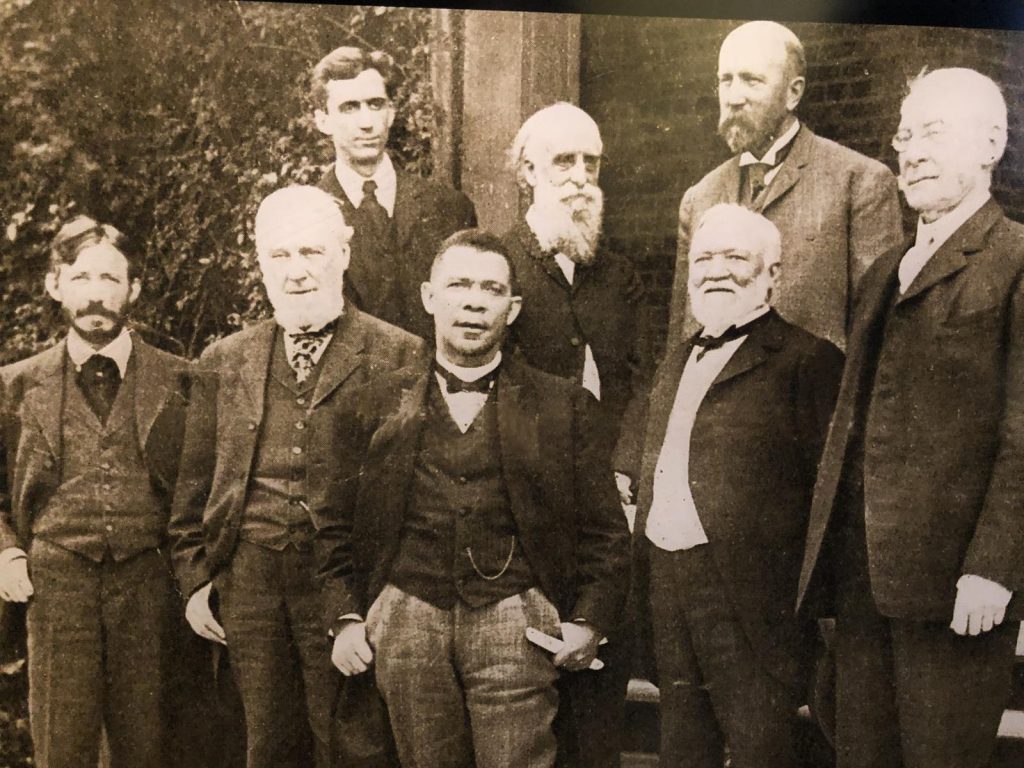 Washington grew up in the kitchen cabin, as his mother was the plantation cook. The family slept on a pile of rags on the dirt floor and had little to eat. Washington recalled that they got their meals “like dumb animals get theirs. It was a piece of bread here and a scrap of meat there….a cup of milk at one time and some potatoes at another….”

The plantation’s 1861 property ledger lists Booker as “1 negro boy” valued at $400, and every moment of Booker’s day was spent working for the James Burroughs family. As a small child, he cleaned the yards, carried water to men in the fields and took corn to the mill.

From such humble beginnings, Washington went on to become America’s most influential black leader at the turn of the 20th century. He worked to promote black businesses, help black farmers and secure financing for black schools. A well-known speaker, Washington advised governors, congressmen and U.S. presidents. Among the 14 books he wrote are Up from Slavery and My Larger Education, both available in the visitor center bookstore. Washington was the first African American to receive an honorary degree from Harvard University (1896), the first on a U.S. postage stamp (1940) and the first to have a U.S. ship named after him (1942).

CONNECTING WITH A POPULAR TV SHOW

Antique hounds and fans of cable television’s Salvage Dawgs have a field day rummaging around Black Dog Salvage in Roanoke, the biggest city on the Blue Ridge Parkway. In this huge antique warehouse operated by master scavengers turned TV stars Robert Kulp and Mike Whiteside, browsers will find everything from church pews and stained-glass windows to wagon wheels, clawfoot bathtubs and industrial machinery. Outside by the parking lot, items for sale might include iron gates or a Howard Johnson’s highway sign. Or how about a statue of Chairman Mao Tse Tung of China priced at $8,000?  Besides architectural remnants and other large pieces salvaged from buildings around the country and the world, you also may find vinyl records, soft drink memorabilia, artwork and other vintage items that don’t require a truck to haul them away. 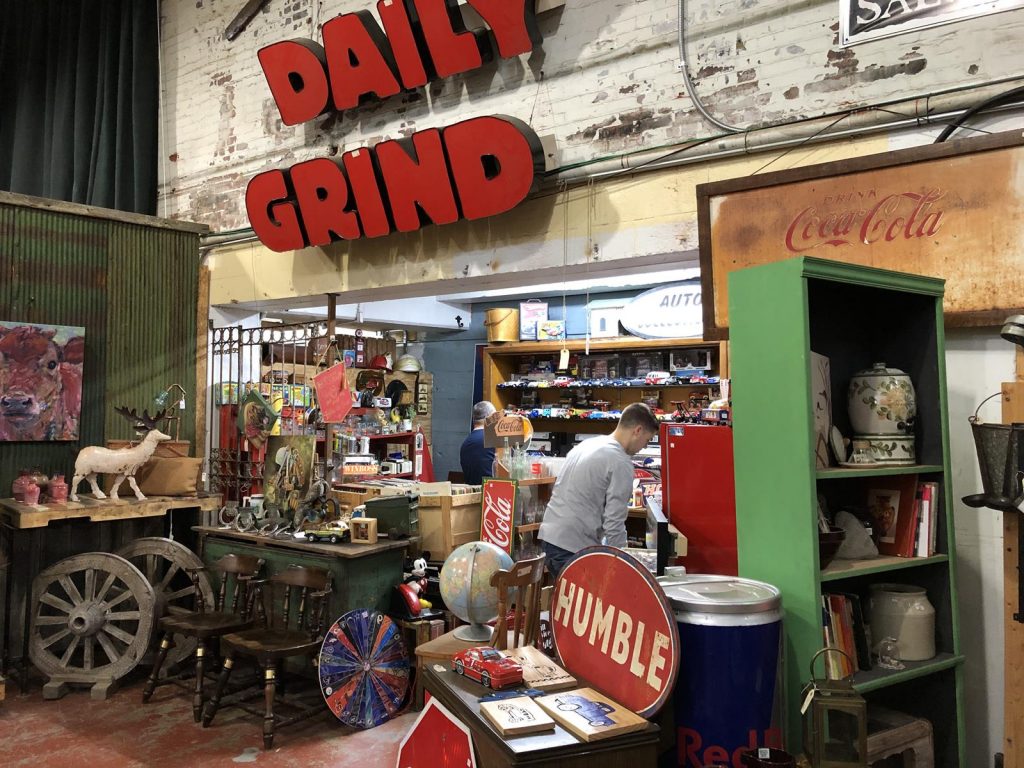 Video screens in two places show clips from Salvage Dawgs (on the DIY channel). Kulp, Whiteside and other employees who appear on the show are glad to stop and chat with guests and pose for pictures. Many fans buy logo T-shirts and the store’s own brand of relishes.

First-time visitors to Roanoke make a beeline to the scenic overlook at the foot of the iconic Roanoke Star in Mill Mountain Park. The steel-and-concrete structure, sort of like a star atop a Christmas tree, has served as a beacon since 1949. Billed as the world’s largest manmade star, the 100-foot-tall landmark symbolizes Roanoke’s progressive spirit and accounts for its nickname—Star City. From the wooden platform you have panoramic views of the city spread out 1,700 feet below and crests of mountains on the Appalachian Trail. Turn around and wave at the webcam mounted on Roanoke’s shining star—provided you’ve notified friends with access to a smartphone or computer. Also in the park are hiking and biking trails, Mill Mountain Wildflower and Mill Mountain Zoo.

Several attractions recall Roanoke’s heyday as a railroad town. The Virginia Museum of Transportation, housed in a former Norfolk & Western Railway freight station, boasts an impressive collection of steam and diesel locomotives. In addition to trains, there are auto and aviation galleries. The romance of railroading also comes alive in the O. Winston Link Museum & History Museum of Western Virginia, which displays the work of a New York photographer who captured the end of the steam locomotive era in the 1950s with poignant photos of life along the tracks in Virginia and North Carolina. The museum occupies part of the former N&W passenger station.

Downtown Roanoke is home to fun shops along Market Street and the Historic Roanoke City Farmers Market, which dates back to 1882. The market is open seven days a week year-round.

For more information on Virginia’s Blue Ridge, log on to www.visitvbr.com.