For tour planners who are only familiar with Chicago’s big museums and standard sightseeing circuits, perhaps it’s time to liven up the itinerary with some less obvious cultural, architectural and recreational offerings in the Windy City. Consider a specialty tour, small museum or active pursuit.

This summer I’ve tried to peel back the layers of Chicago and find new experiences. Here are some of my discoveries:

HOLLYWOOD IN CHICAGO. I’m not the world’s biggest movie fan, but I enjoyed sitting back and being entertained by movie clips and tour guide patter for 90-plus minutes on the “Chicago Film Tour.” It’s a fun, effortless way to learn about the city and reminisce about favorite movies that were filmed in Chicago.

The 30-mile bus tour through downtown and many neighborhoods doesn’t make stops but does slow down as it passes restaurants, music clubs, train stations, cemeteries, theaters, banks and other spots that earned a few minutes of celluloid fame. Before and after the point of interest, related movie clips appear on the small video screens scattered throughout the bus.

As we passed Wrigley Field, for example, we viewed scenes from “Ferris Bueller’s Day Off “ (1986) and “A League of Their Own” (1992). Our guide, Patrick McDonald, a film critic for HollywoodChicago.com, also mentioned other movies filmed there. Clad in a gray vest, Batman T-shirt and shocking pink, high-top tennis shoes, he set a casual tone, telling inside stories and tossing out movie trivia questions.

Patrick pointed out filming locations for recent movies like “Public Enemies” (2009) and such classics as Alfred Hitchcock’s “North by Northwest” (1959), starring Cary Grant and Eva Marie Saint. Each passenger gets a handout that lists 84 movies and 38 locations.

The tour meets at the Rock and Roll McDonald’s at Clark and Ontario streets, just across from Rainforest Cafe and Hard Rock Cafe. (312-593-4455, chicagofilmtour.com) 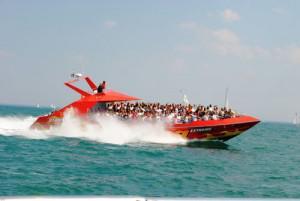 SEADOG CRUISES. For a daring twist on the traditional boat cruise, consider Seadog Cruises’ “Extreme Thrill Ride,” a 30-minute speedboat ride on Lake Michigan. Buckle your seatbelt and get ready for roller coaster action to the sounds of rock music, screams and “woo-hoo’s.”

Traveling at speeds up to 40 m.p.h., the boat churns up the water, getting everyone wet and windswept as it makes sharp turns and 360-degree spins. At one point it stops to allow time for skyline photo ops and tour guide commentary. Before our cruise took off from Navy Pier, the captain announced that passengers with cardiac conditions or back or neck problems, or in late stages of pregnancy, should “get off now” and would receive a refund. The minimum height to cruise is 48 inches. (888-345-3880, seadogcruises.com) 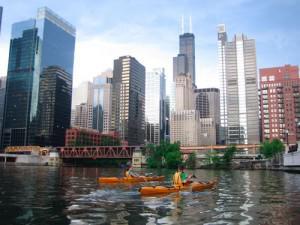 PADDLE TOURS. The most physically demanding of my recent adventures, and probably the most fun and satisfying, was a three-hour Chicago River tour with an outfitter called Kayak Chicago. But it wasn’t paddling every second. We had time to glide, and even the paddling was leisurely, not frantic.

Though we had kayaked a few times on vacations, my adult son and I are basically novices and were heartened to find most of the 14 others on our Sunday evening “Sunset Paddle” were rookies, too. A few opted for tandem kayaks, but most of us wanted to be captain of our own craft.

As Kayak Chicago states, no experience is necessary. Still, I was a little apprehensive. Would I tip over, lose my paddle or fall way behind? I did bang my red kayak into a few cement walls, buoys and other kayaks—and even startled a waterfowl of some kind when I crashed into a dead branch—but I survived.

The 4.5-mile roundtrip started at Kayak Chicago’s dock in Lincoln Park and went as far the Marina City towers at the State Street Bridge. Paddling past tree-lined banks in the beginning, with ducks and Canada geese as company, we had to put up with some gritty industrial scenery, but that was outweighed by the views of the Willis Tower, Hancock Building, Merchandise Mart and other downtown architectural landmarks.

The only turbulence came when an occasional yacht or sightseeing boat made waves. We heard one tour boat guide make a wisecrack about kayakers in the “toxic” water. True, the Chicago River is not the cleanest, and I tried to not let paddle spray enter my mouth. (630-336-7245, kayakchicago.com) 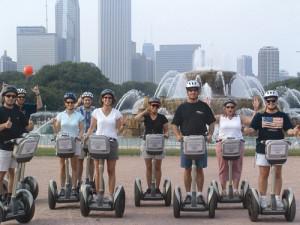 SEGWAY TOURS. As I did for the kayak, I had to sign a waiver that I was embarking on a dangerous activity. But I didn’t crash or fall off once, though my Segway grazed the corner of a cement wall when the guide wasn’t looking.

On a two-hour outing from downtown Grant Park with Absolutely Chicago Segway Tours, I quickly learned how to shift my weight and move my feet to accelerate and decelerate the Segway human transporter, a two-wheeled, self-balancing vehicle powered by computers and electric motors. Standing upright at eight inches off the ground, you simply lean forward on your toes to glide forward and lean back on your heels to go backward. To turn you lean the handle bar to the left or right.

After 15 or 20 minutes of instruction and practice, my group made its way from Grant Park to the lakefront Museum Campus, where we parked, rested and took pictures of the Chicago skyline. Along the way the guide offered commentary on Chicago.

Except in a few high-traffic pedestrian areas, I usually went the maximum speed—8 m.p.h. Absolutely Chicago’s machines are set at that limit but can go as fast as 12.5.

Segway tours are popular and should be booked in advance. Because Segways are expensive to purchase, easily costing $7,000, they are not as plentiful as bicycles. (877-866-0966, chicagosegways.com)

HISTORIC HOUSE. Just two blocks west of Michigan Avenue’s “Magnificent Mile” stands an exquisitely preserved mansion from America’s Gilded Age. Once the home of banker Samuel M. Nickerson, the stately landmark at Erie and Wabash is called the Richard H. Driehaus Museum. Many wealthy industrialists of the era built mansions in this “suburban” neighborhood when Lake Michigan came up to what is now Michigan Avenue; few of these manses remain.

The Nickerson home was known as the “Marble Palace,” a reference to the rich use of marble—17 different kinds—in the first- and second-floor hallways. The three-story mansion was the largest private home in Chicago when completed in 1883. For many years it served as offices for the American College of Surgeons and was noted for its soot-blackened exterior, the result of a century’s worth of pollutants penetrating the porous sandstone. A revolutionary laser process, part of a $20-million restoration project from 2003-2008, got rid of the grime.

The facelift was financed by philanthropist and decorative arts collector Richard H. Driehaus, of Driehaus Capital Management, who has made it a showplace and must-see museum for anyone who “collects” historic houses or appreciates antiques.

Besides the lavish use of marble, the interior’s over-the-top opulence is reflected in the richly carved wood wainscoting (paneling), decorative ceiling panels and fireplace mantels in the dining room, front parlor, library and other formal rooms. Woods include oak, mahogany, walnut and ebonized cherry.

Among the most valuable decorative arts on display, though not original to the house, are Tiffany Studios glass pieces—lamps, fireplace screens, a chandelier—from Driehaus’ extensive Tiffany collection, the largest in the country. (312-482-8933, driehausmuseum.org)