15 Top Religious Attractions in the U.S. 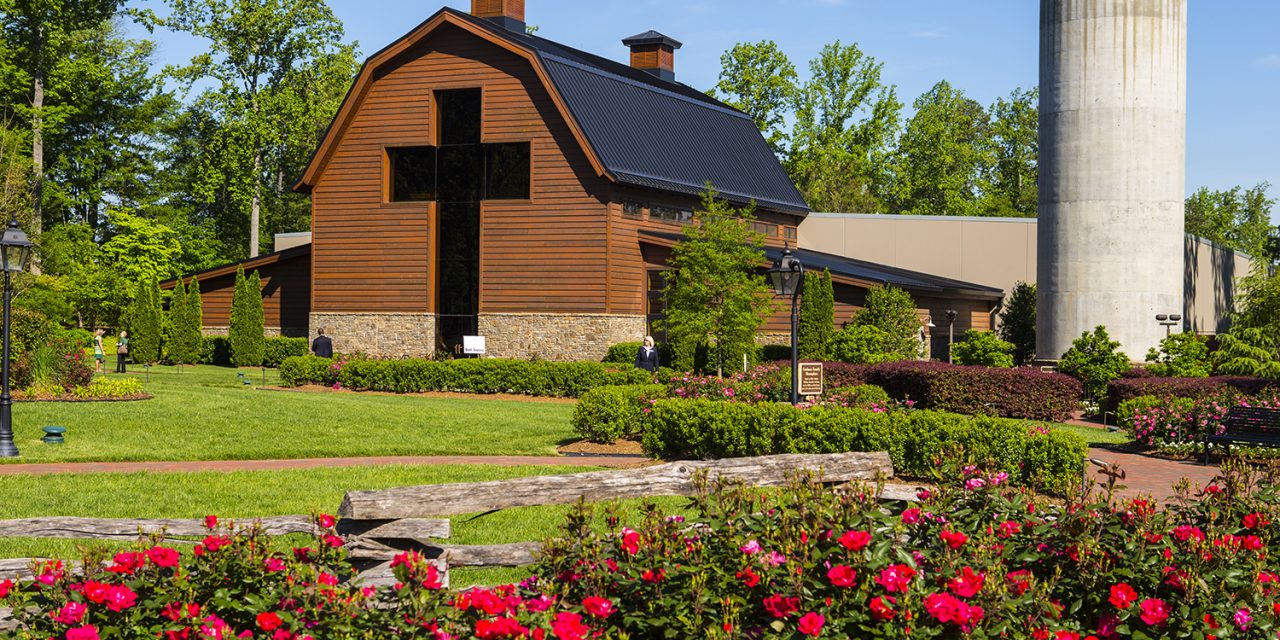 In every part of the United States, travelers will find religious attractions associated with our nation’s heritage. Most popular are religious museums and historic churches. In Central Florida there’s even a religious theme park.

The following are 10 noteworthy places of special interest to the faith traveler:

Billy Graham’s life and mission are nowhere better expressed than at the Billy Graham Library. Styled after a dairy barn and featuring a cross-shaped entrance, it is located on a 20-acre plot near where Graham grew up in Charlotte, N.C. The library is a testament to the evangelistic work of Billy Graham, a man whose desire to preach the Gospel would span over 50 years of ministry and reach more than 215 million people in over 185 countries worldwide. Visitors to the library can retrace Graham’s evangelical journey through multimedia presentations, photos and other memorabilia. They also get an intimate look at Graham’s roots by touring the carefully restored home where Graham lived as a boy.

Biblical stories come alive at Creation Museum, a 70,000-square-foot facility featuring an ambitious two-story museum and lush outdoor garden. Located in Petersburg, Ky., the museum is meant to provide a new way of experiencing scriptural history. The area inside the museum is divided into uniquely configured spaces that allow visitors to interact with its 160 exhibits. Visitors will encounter creative representations of the wonders of creation, the tragedy of the fall, the life and mission of Jesus and his promise for the future. They will feel like they are walking through biblical history as they see murals, animatronic dinosaurs and life-size humans, the two-story dinosaur exhibit, the fossil exhibit, the exotic animal petting zoo, the botanical garden and a mile-long nature trail. The special effects theater, equipped with rumbling seats and mist machines takes visitors on an imaginative journey involving dinosaurs, dragons, the six days of creation and more. Visitors who wish to learn more may attend workshops and specific programs hosted each week.

Groups visiting Creation Museum enjoy special assistance for check-in and discounted rates. A minimum of 15 is required for a group reservation, which must be made two weeks in advance. (888-582-4253, creationmuseum.org)

At Holy Land Experience in Orlando, Fla., visitors have the opportunity to experience the sights and sounds of the biblical world in an interactive way. Once through the gates, visitors travel 7,000 miles away and 2,000 years back in time to ancient Jerusalem. The structures and exhibits reflect the architecture, setting and way of life of the Holy City at the time of Christ. The carefully detailed Garden Tomb, Qumran Dead Sea Caves, Great Temple and Plaza, and Wilderness Tabernacle allow visitors to gain a new understanding of their biblical significance. The Temple Plaza hosts musicals, presentations and other events; behind it is the six-story, gleaming white-and-gold temple, which was the center of religious life in Jerusalem. While immersed in the ancient world, visitors enjoy 21st century amenities like restaurants, coffee shops and cafes.

The stunning Crystal Cathedral in Garden Grove, Calif., blends the innovation and sophistication of contemporary architecture with the magnificence and grandeur of medieval cathedrals. Recognized as an architectural treasure, the cathedral, designed by architect Phillip Johnson and containing 10,000 panes of glass is a beautiful expression of light and space as well as grandeur and intimacy. The mega-church houses the international Crystal Cathedral Ministries, a congregation of over 10,000 members. It is known for the “Hour of Power” broadcast featuring founding Pastor Robert H. Schuller, who just resigned from the church’s board following internal turmoil and bankruptcy sale of the cathedral to the Roman Catholic Diocese of Orange County. Crystal Cathedral Ministries has three years to find a new home. (crystalcathedral.org)

Trinity Church in New York’s Lower Manhattan is a parish rooted in the Episcopal tradition with ties to the Anglican Communion. Located amid towering skyscrapers on Broadway at Wall Street, Trinity Church was originally built in 1697 and rebuilt in 1788 after burning down in 1776. Until the 1860s, the 280-foot steeple was the highest point in the city and a landmark for ships at sea. Its graveyard contains the remains of Alexander Hamilton, the first United States Secretary of the Treasury, and Robert Fulton, developer of the steamboat. The Trinity Museum hosts special exhibitions and concerts throughout the year, and displays burial records, maps, and other artifacts. (212-602-0800, trinitywallstreet.org)

The Wycliffe Discovery Center in Orlando, Fla. is a faith-based organization that offers visitors an opportunity to experience the Bible in a unique way. The center is named after John Wycliffe, the 14th century English scholar who translated the Bible into the common language. Through multimedia presentations, computer games and simulations, and hands-on activities, the discovery center allows visitors to explore the Bible’s history, linguistic and cultural issues, and the ongoing work of Bible translation. Lunch and snacks are available in the Cafe Karibuni,and the Village Shop features unique gifts and mission resources. (407-852-3626, wycliffe.org/discoverycenter)

Cleveland’s Maltz Museum of Jewish Heritage opened in 2005 with the mission of fostering tolerance and understanding by sharing Jewish heritage through an American perspective. Stories of individuals and families both past and present become real through artworks, films, interactive exhibits, oral histories and other artifacts. The building itself is made with golden Jerusalem limestone that was mined and hand-chiseled in southern Israel.

The museum is divided into seven themed areas, each telling a part of the story: from immigration to assimilation, the triumphs and tragedies, and all the culture and religion that came along. Also emphasized are Cleveland’s Jewish immigrants and their role in the city’s history.
(216-593-0575, maltzmuseum.org)

Christ in the Smokies Museum and Gardens in Gatlinburg, Tenn. features life-sized representations of important scenes from the life of Jesus Christ. Utilizing life-size figures and dramatic lighting as well as music and special effects, the museum offers a unique experience for visitors to enjoy as they walk through the Biblical world of 2,000 years ago. Included in tours is a sculpture of Christ, ancient coins and precious gems. The gift shop has a large selection of inspirational merchandise. (865-436-5155, christinthesmokies.com)

Originally built to house a Roman Catholic museum and think tank, Pope John Paul Cultural Center in Washington, D.C. was meant to explore the intersection of faith and culture through museum exhibits, academic discussions and interactive displays. Due to financial woes, the center was put up for sale. In August 2011, Carl Anderson, Supreme Knight of the Knights of Columbus, the world’s largest Roman Catholic fraternal service organization, announced plans to purchase the center and turn it into a shrine and museum honoring the life of Pope John Paul II.

The shrine is open to the general public on a limited basis while new museum exhibitions are developed on the life and work of Blessed John Paul II as well as Catholic heritage in North America.

The shrine holds Mass on Tuesdays and Thursdays. Visitors can see the kneeler where Pope Benedict XVI prayed during his 2008 visit to Washington. (202-635-5400, jp2shrine.org)

Temple Square in downtown Salt Lake City is the world headquarters of The Church of Jesus Christ of Latter-day Saints and one of Utah’s top tourist attractions. Open every day of the year, the square is run in part by hundreds of volunteers and missionaries. Visitors to the 35 acres of Temple Square will find there’s not enough time in a day to experience over 15 attractions and special events as they are immersed in Mormon culture and heritage.

The square hosts free guided tours and presentations featuring historic sites, special exhibits, art displays, films, and parks and gardens. Other attractions include the largest genealogy library of its kind in the world and the celebrated Mormon Tabernacle Choir and Orchestra. Restaurants and other catering are available to help make the visit a memorable one. (800- 363-6027, visittemplesquare.com)

Museum of the Bible

Following its debut in November 2017, The Museum of the Bible offers visitors the chance to experience the bible in a whole new way.  Located in Washington DC, the museum’s six floors all contain different exhibits that work to explore the narrative, history, as well as the impact of the Bible.  Visitors have the chance to walk on land through the Red Sea, eat biblically inspired food, see fascinating treasures from Vatican and Israel, and discover the influence the Bible has had on American culture.  The museum also features a rooftop garden, a ballroom, restaurants, and a 500-person amphitheater.  (866-430-6682, https://www.museumofthebible.org/)

St. Patrick’s Cathedral located in New York is considered to be one of the most visible symbols of the Catholic Church in the United States.  Decorated in the Neo-Gothic style, the cathedral features stained glass windows, 300-foot-tall spires, and high quality marble designs.

Built with the intention of replacing a previous cathedral, St. Patrick’s Cathedral was erected in 1879 and has since become the seat of the archbishop of the Roman Catholic Archdiocese of New York.  The cathedral was also designated as a landmark in 1976. (212-755-4128, https://www.saintpatrickscathedral.org/)

Temple Emanu-El is the first Reform Jewish congregation in New York and has remained an integral part of the Reform branch of Judaism ever since it was founded in 1845.  The congregation originally started with 33 Jewish people, but the community now consists of over 2,250 Jewish households.

In terms of architecture, the temple is a blend of different styles from Romanesque with the lancet windows to Byzantine with the double-domed ceiling.  It’s size also rivals the largest synagogues in Europe including the Grand Choral Synagogue of St. Petersburg and Moscow Choral Synagogue.  (212-744-1400, https://www.emanuelnyc.org/)

Located near the Colorado Rockies, The Shambhala Mountain Center is a Buddhist retreat that sits on nearly 600-acres of grassy fields and native forests.  Established by a Tibetan meditation master in 1971, the Shambhala Mountain Center offers over 100 different programs every year including yoga instruction, mindful living, contemplative arts, and leadership training.

Shambhala is also home to the Great Stupa of Dharmakaya, which is one of the most significant examples of sacred architecture.  Said to promote harmony and prosperity, the Great Stupa also features a golden statue of Buddha and symbolic decorations.

This 200-year-old Roman Catholic church located near Santa Fe is regarded as one of the most important Catholic pilgrimage centers in the United States.  El Santuario de Chimayó has been the destination for a traditional Easter pilgrimage that began when the U.S soldiers and sailors who fought during the Bataan Death March prayed to Santo Niño for their deliverance.

Every year over 300,000 people come to make pilgrimages as a way of seeking blessings or fulfilling a vow.  Visitors also come in hopes of a miraculous cure from the “holy dirt” that is located in a small room on the premise called el pocito.