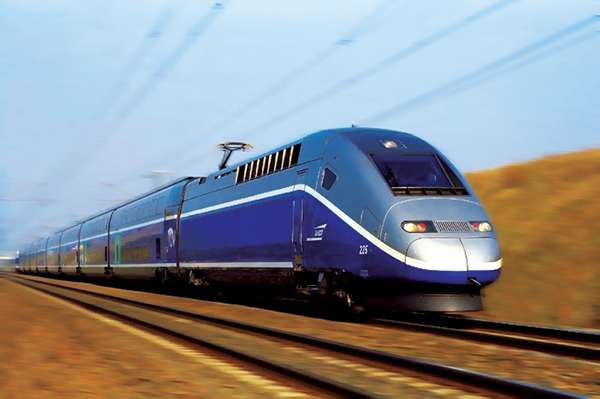 Traveling at speeds close to 200 mph, comfortable TGV duplex trains  take off from Paris, streak through France and pull into Spain’s second largest city before you know it.

They say getting there is half the fun. Indeed, traveling on the new high-speed train between Paris and Barcelona, so unlike being confined in an airplane cabin, was a happy experience—one that I still daydream about. In fact, I felt a tinge of sadness when my TGV double-decker pulled into Barcelona’s Sants station exactly on time—6½ hours after it had left Paris’ Gare de Lyon. It was sort of like Cinderella’s coach turning into a pumpkin.

My, how time flies when you’re having fun. And this train really flies. But there’s nothing frenetic about streaking down the middle of France at speeds exceeding 180 mph. It’s actually a relaxing journey, with time to read, nap, eat and just gather your thoughts about where you’ve been and where you’re going. How often do we get a chance to really veg out? 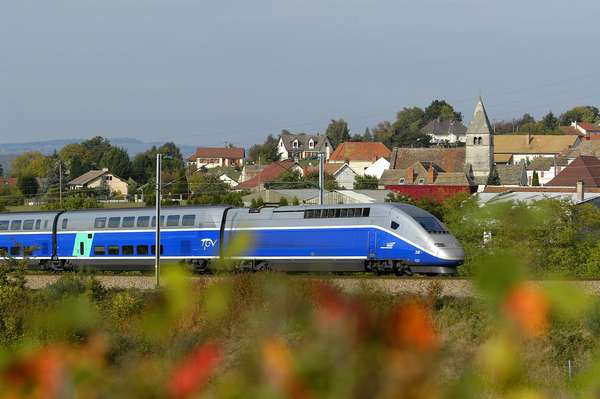 A TGV duplex streaks through the French countryside.

Getting from Paris to Barcelona this fast wasn’t possible until late last year, when new direct service was introduced after track upgrades in Spain.  Previously, passengers had to change to a Spanish high-speed train at Figueres Vilifant, 15 miles over the French-Spanish border, with a stop at the Catalan city of Girona before arriving in Barcelona. The new service is a joint project between SNCF, France’s national railroad, and its Spanish equivalent, Renfe.

Three direct TGV duplex trains depart Paris every day, one in the morning and two in the afternoon. (TGV stands for train à grande vitesse, or train of great speed. These swift trains link more than 200 French cities.) They make only one stop before Nimes, then hug the Mediterranean coast to Barcelona, stopping in Montpellier, Narbonne, Perpignan and Girona. 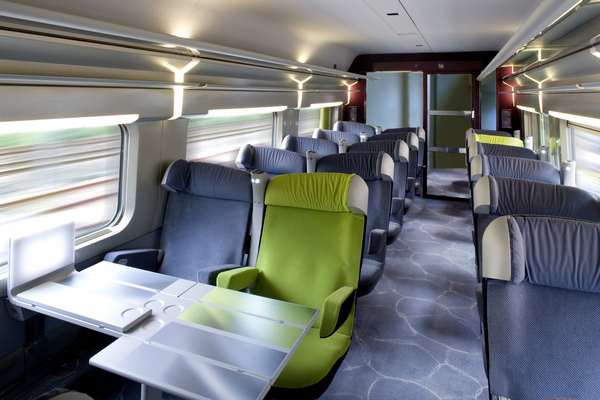 From my upper-level perch in seat 61, in the last row of car 11, I set up my own little “compartment,” which I turned into a snack bar, travel writing office, library and place to nap. Seats in this first-class carriage were three across—I had the single directly across from an empty pair. With both an aisle and a window, I was content. (Second class features four seats across—two and two.)

The train on my spring journey was not crowded, but I suspect it fills up more in the summer tourist season. The noise level was low—most people read, played cards and napped. A few plugged in their laptops to the power outlets.

Announcements were in French and Spanish, but after we crossed the border into Spain, they were in English, too. I was the only American in my car.

Conveniences and design elements made car 11 a comfortable place to be for a long haul. The purple-and-royal-blue upholstered seats had arm rests, a mesh holder in the seatback for personal items, a large tray table, a little trash bin and, best of all, plenty of leg room. I could slide the seat forward if I wanted to stretch out or pull down the window shade if it got too sunny. Carpeting was another nice touch. Overhead racks provided space for carry-ons, with more luggage space just outside the door.

Once I got settled in my seat, I took out the ham-and-cheese sandwich (on a crusty baguette) I bought at the Gare de Lyon. For a hefty $14, I could have gotten a croque-monsieur (the classic French grilled ham and cheese) with drink at the snack bar in car 10. Also available were salads, Pringles and other munchies, and candy bars, plus coffee tea, soft drinks, wine and beer. Several times an attendant came down the aisles offering refreshments from a “service bar.” 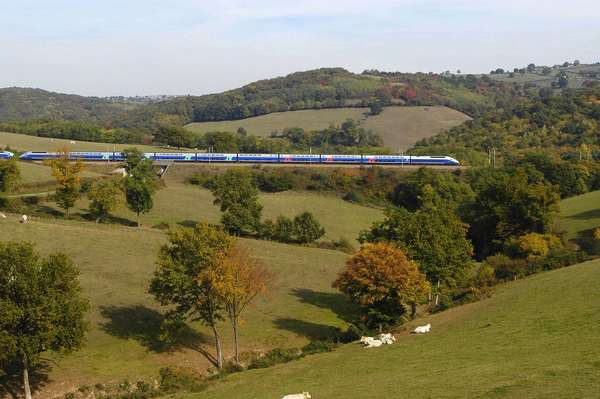 Riding a French TGV is almost like floating on air.

I alternated between reading travel guidebooks, sorting out my next days’ hotel and train arrangements in Spain, and staring out the window as towns and verdant fields whooshed by. Bright yellow spring flowers blanketed some of the fields, with sheep and cows adding interest now and then. The cows made me think of all those tasty French cheeses, the vineyards of French wines. My train passed nameless villages with rustic stone houses and church steeples, but I barely got a look at them because we were moving so fast. The scenery changed when we got close to the coast, with olive trees and palms coming into view.

Having this time to kick back, daydream and catch up on rest after hectic days in London and Paris helped recharge my batteries. Plus, I could get organized—sorting out trip details, counting my euros and putting my receipts in order. Only a few times did I get up from my seat—but it was a good feeling just knowing I could. That freedom to move around is a big bonus of train travel. (I liked the automatic hand dryers in the bathroom, something I found on other deluxe trains in Europe.)

I had only a few hours to look around Barcelona the night I arrived, but it was off to Madrid early the next morning on a high-speed Spanish AVE train to Madrid. I later went on to Cordoba, also an on AVE, and then to Algeciras on a regular-speed train.

On the six train journeys I took over a 10-day period, I was using a Eurail Global Pass Flexi, good for 10 days of travel within a two-month period in 24 countries. The pass and a seat reservation for each segment were booked through Rail Europe. (Most high-speed trains require a reservation.)

For details on the Paris-Barcelona high-speed train and other European rail routes, visit www.raileurope.com. Rail Europe, the leading North American distributor of European rail products, books point-to-point tickets and rail passes for individuals and groups. The group department (800-462-2577) works one-on-one with tour operators who want to incorporate rail segments into their bus journeys on the Continent, offering discounted group tickets and other travel services, such as hotel and airport transfers, museum passes and hop-on, hop-off bus tours in major cities.