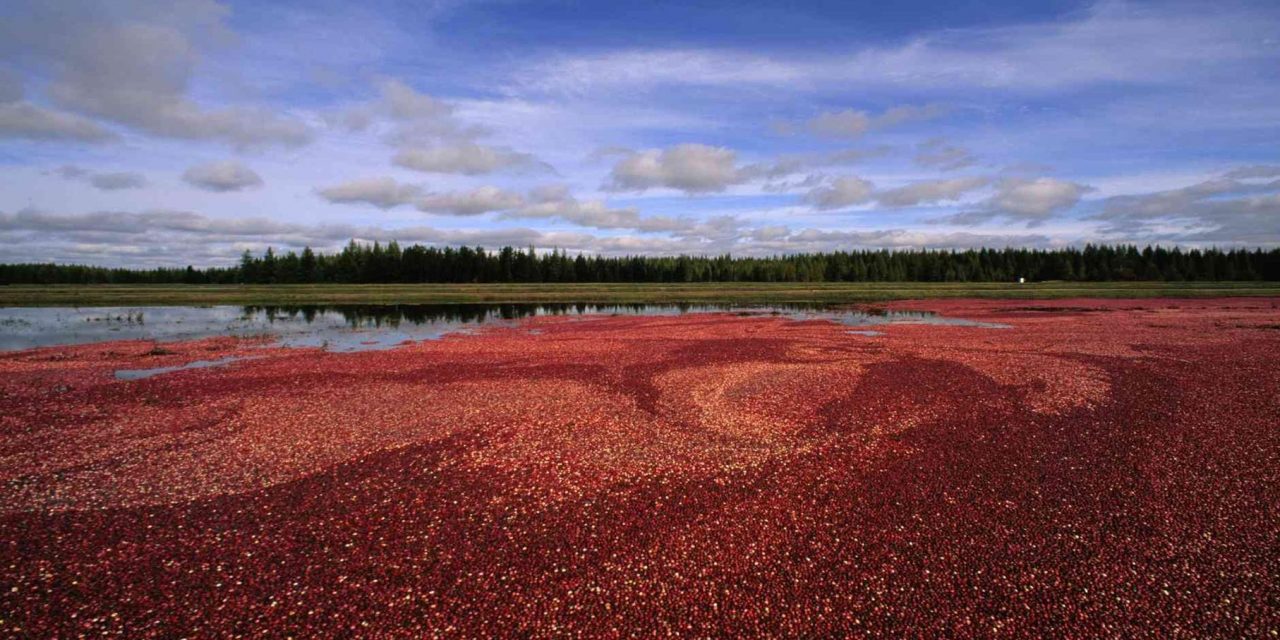 What better way to unplug from urban life than getting lost in a corn maze, picking your own pumpkin or smelling fresh-mown hay. Because many folks these days are several generations removed from even knowing anyone who has farmed, forays into the countryside can be eye-opening experiences.

Whether you call it ag tourism, agricultural tourism or agritourism, connecting travelers with farm life is big business in Wisconsin. Traditional farms, cranberry marshes, wineries, farmers’ markets, and annual fairs and festivals all allow vacationers to get in touch with the people who produce their food. Everyone likes to eat, but few of us know where that food actually comes from and how it ends up in the grocery store and on the dinner table. 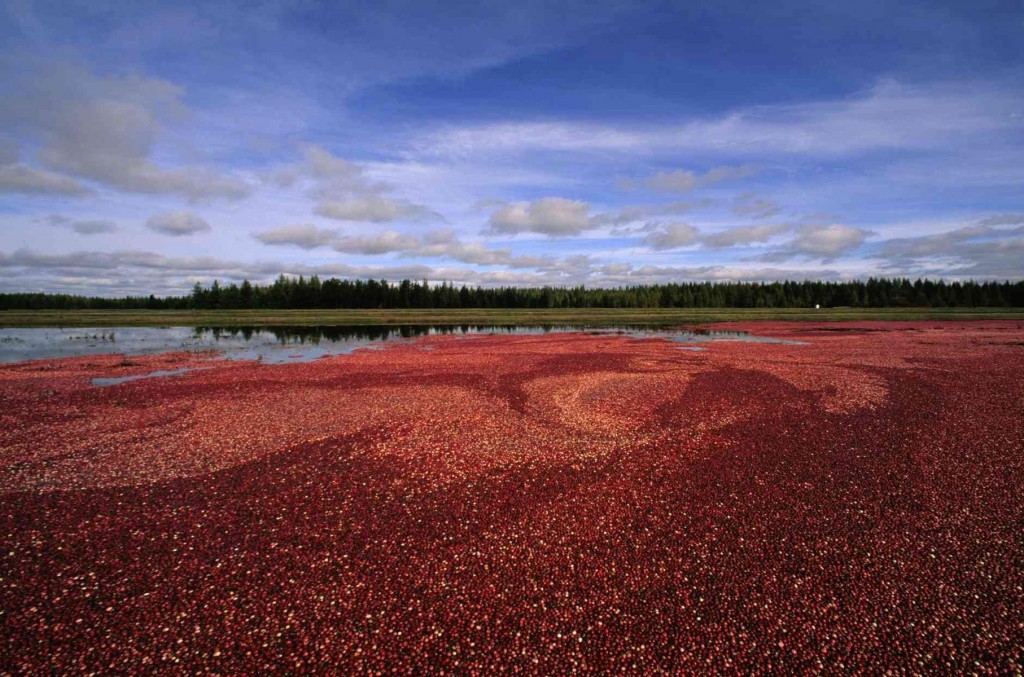 Many are surprised to learn that Wisconsin, not Massachusetts or somewhere else out East, is America’s largest producer of cranberries. From late September well into October, several cranberry growers in central, northern and western Wisconsin offer harvest-time tours that take visitors right up to the edges of the flooded marshes, where workers—seemingly out of an Ocean Spray TV commercial—wade through the crimson lakes, raking the tart red berries (after being separated mechanically from the vines) to an elevator belt that conveys them into waiting trucks. As the tour guide on the Berry Bus at Glacial Lake Cranberries, near Wisconsin Rapids, says, “It’s one of the prettiest sights in all of agriculture.” Flaming fall foliage may enhance the color-splashed scene. Tour members are encouraged to pick a berry and eat it. The gift shop at Glacial Lake’s visitor center has everything cranberry—from wine, jam and salsa to five-pound boxes of the fresh fruit. Tourists also learn about the official state fruit at the Wisconsin Cranberry Discovery Center museum in Warrens and on tours at the nearby Wetherby Cranberry Company marsh. In northern Wisconsin, the Vilas Cranberry Company (Manitowish Waters) and Fifield Cranberry Marsh offer harvest tours. 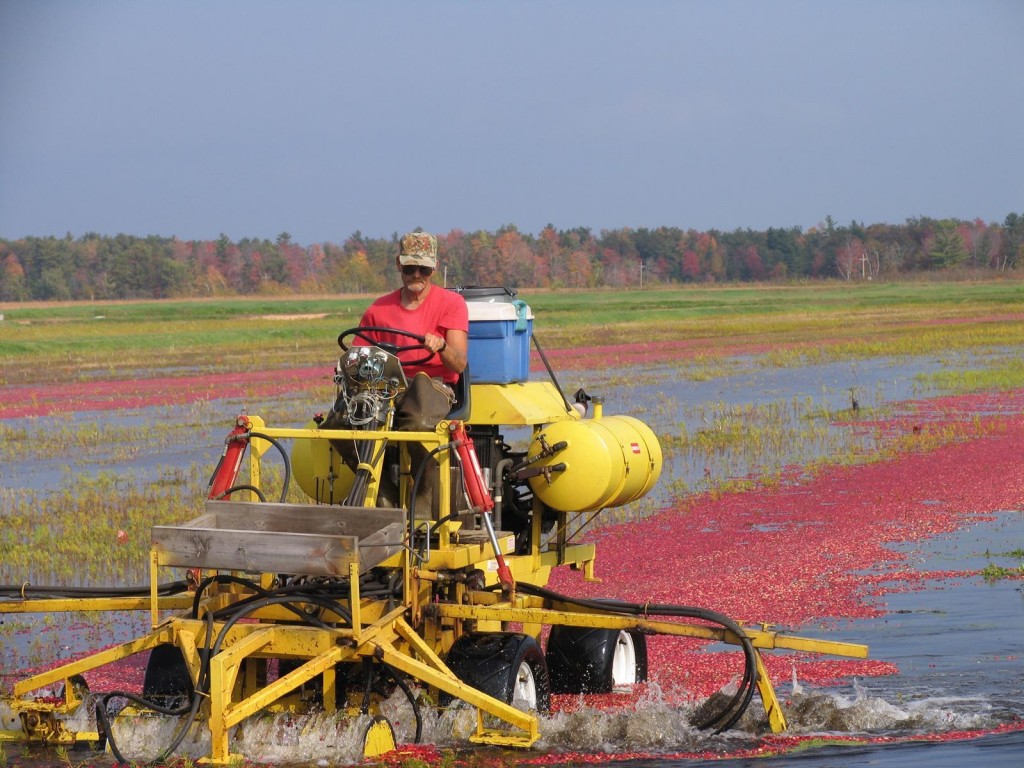 On at least one highway in central Wisconsin you’ll see cranberry bogs on one side, potato fields on the other. Both crops do well in the region’s sandy soil (known as the Central Sands or Golden Sands) and are harvested at about the same time. On tours of the RPE (Russet Potato Exchange) packing plant near Stevens Point, visitors view the whole noisy operation up-close, climbing metal stairs next to the conveyors to see the potatoes (many picked from its own adjacent fields) get sorted, bagged and boxed. The cold storage room (48 degrees) and high-tech lab are other tour stops. A goody bag afterward includes a wrapped potato. Heartland Farms in nearby Hancock, Wisconsin’s largest potato grower and the largest potato supplier to Frito-Lay, also offers group tours, as do the area’s onion-processing plants. 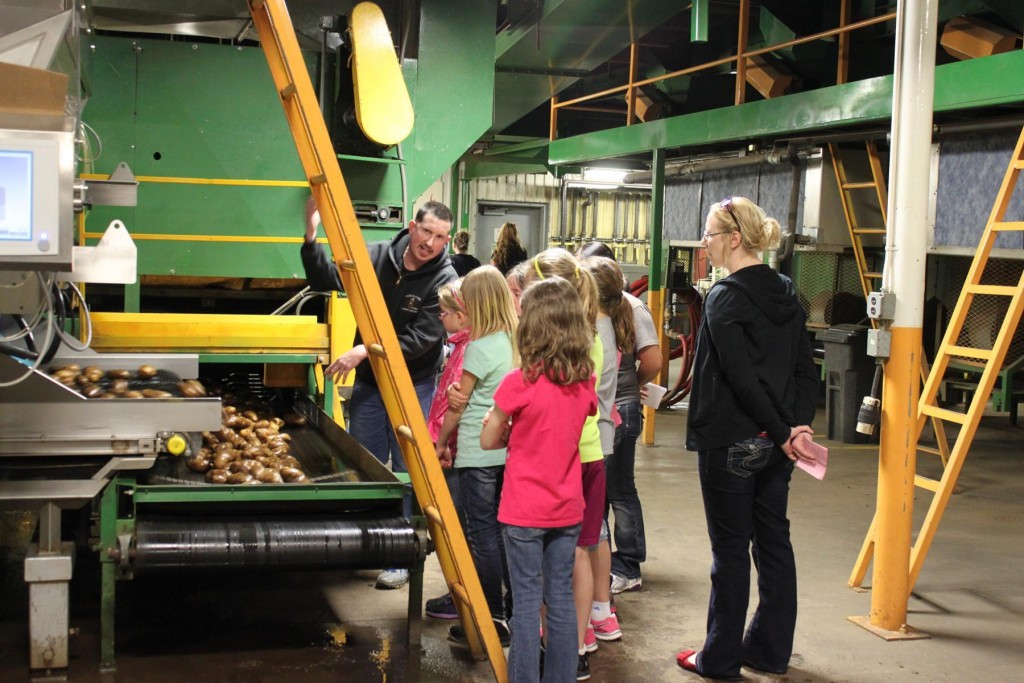 Tours of the RPE packing plant shed light on the region’s potato industry.

Nasonville Dairy in Marshfield, a family-owned enterprise since 1885, buys milk from 180 farm families and converts it into 100,000 pounds of cheese each day. Tours of the cheese-making plant depict the whole process, from bringing in the milk to making the blocks to packing the final product. Cubes to sample are given out at the end of the one-hour tour, which takes place right on the factory floor, and tour members can stock up on squeaky cheese curds and other items at the store.

The National Historic Cheesemaking Center in Monroe spotlights Wisconsin’s most famous product through exhibits and a 10-minute video that tells all you need to know about curds and whey. The museum’s pride and joy is a humble farmstead cheese factory recently discovered just as it had been left in 1917. 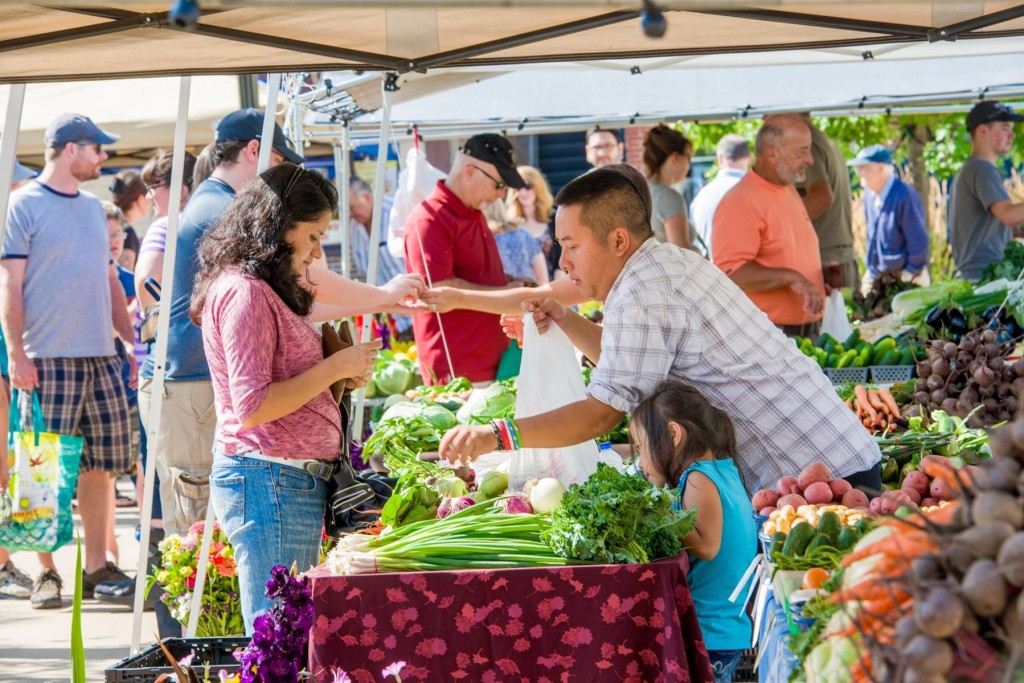 Buy fresh at farmers markets in Stevens Point and Madison

For the best in seasonal bounty, tour groups have a field day at the Dane County Farmer’s Market, a Madison tradition. On Saturdays from early spring to late fall, more than 160 vendors show up at Capitol Square for what is reputed to be the largest producer-only farmers’ market in the country—that is, all items are produced by vendors behind the tables. Street musicians add to the festivities. The Stevens Point Farmers Market, a community staple since 1853, is the oldest continuously operating such market in the state. It’s held six days a week (Saturday’s the big day) from May to October on Market Square, a lively gathering spot surrounded by 19th century brick buildings. 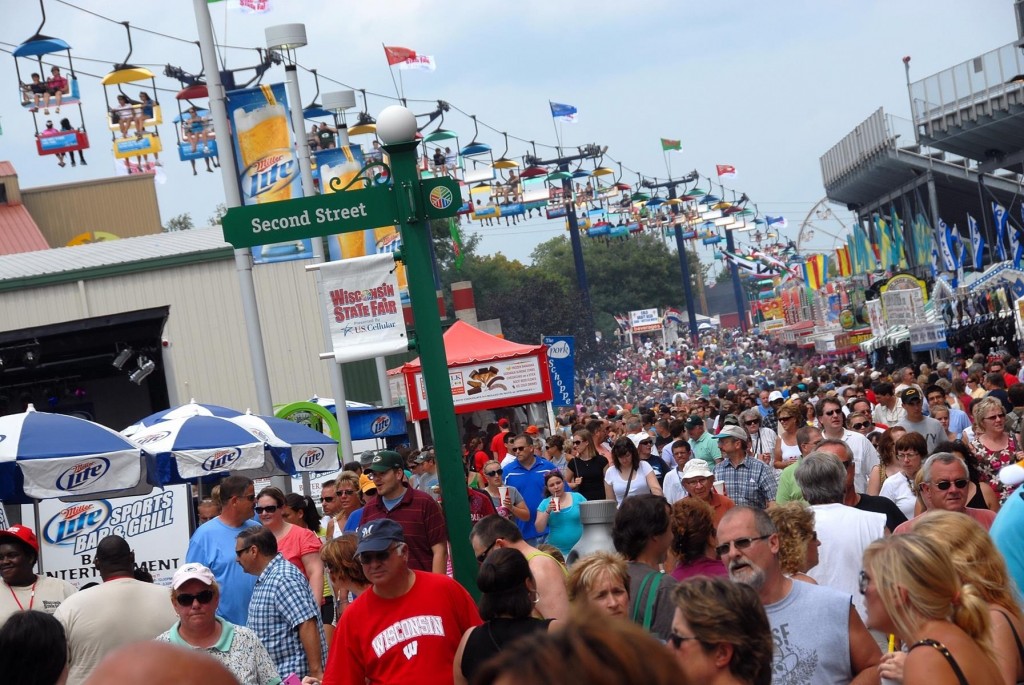 Even more festive are the agricultural fairs staged across Wisconsin every summer. The ultimate ag party is the Wisconsin State Fair, an 11-day affair held every August in West Allis. Fair goers attend pig races, see milking demonstrations, and feast on deep-fried cheese curds and roasted sweet corn dripping with butter. On Labor Day weekend, the Central Wisconsin State Fair takes place on the Marshfield fairgrounds famous for the World’s Largest Round Barn, an architectural landmark dating from 1917. 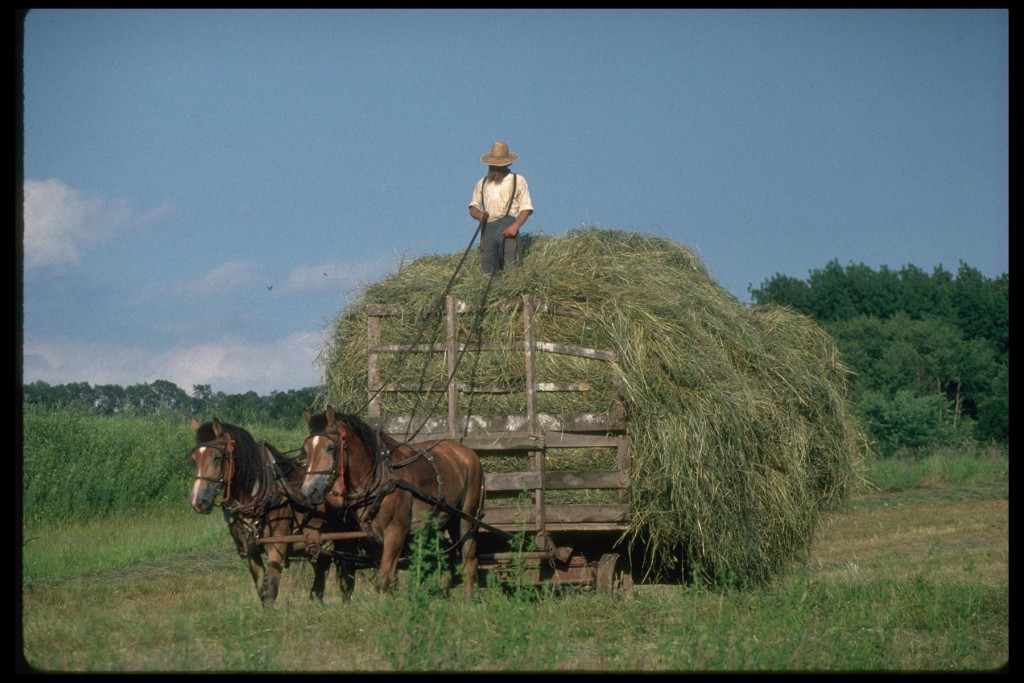 Frozen in time: Scenes out of yesteryear are common in Wisconsin’s Amish communities.

Horse buggies, one-room schoolhouses and clothes hanging out to dry are all part of a simple lifestyle that’s alive and well in rural pockets across Wisconsin. The state’s largest Amish community, centered around Cashton, comprises about 300 families, some of whom welcome tourists to the stores and workshops on their farms. A step-on guide can facilitate a tour of this strict Old Order Amish community.

In Fond du Lac, The Little Farmer is your one-stop-shop for everything apple—bushels, cider, pies and other treats. It’s all produced on-site from the farm’s 6,000 apple trees. At Meuer Farm, pick strawberries, enjoy a hayride, get lost in the corn maze, and learn about honey, bee hives and maple syrup. At LaClare Farms see goat milking and the cheese-making process through glass windows and learn from the farm’s guides.

By the end of a tour at Door County’s Seaquist Orchards, everyone wants to be a cherry grower after learning about experimental farming techniques from the witty farmer-guide. The fourth-generation farm raises 65 percent of Wisconsin’s cherries.

If you’re in search of that perfect pumpkin, Kenosha’s Jerry Smith Pumpkin Farm is sure to have something to suit your fall style, from classic, plump pumpkins to a variety of warty gourds. Your group will enjoy the pumpkin displays portraying famous movies and TV shows.

A survey of Wisconsin agritourism wouldn’t be complete without toasting the wine industry. Dozens of wineries across the state offer tours and tastings. In the Wisconsin Dells area, for example, the historic vineyards at Wollersheim Winery were planted by a Hungarian nobleman before the Civil War and re-established in 1972. Guided tours include a behind-the-scenes look at traditional and modern facilities, plus sampling of the barrel-aged reds, fruity whites, ports and ice wine.

On that note, let’s raise a glass and salute the farmers, vintners, merchants and factories that welcome tour groups and provide insight into where our food comes from.