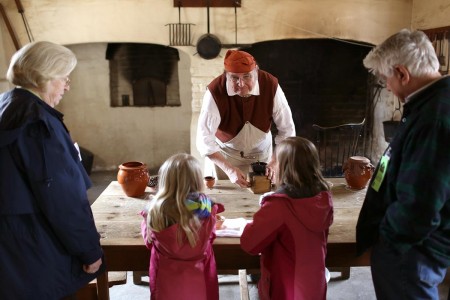 From engaging history attractions to splendid repositories of art, the home of Krispy Kreme donuts abounds with itinerary options for group travel planners.

Today, so many destinations have a delightful story to tell. North Carolina’s fifth largest city, Winston-Salem, has multiple narratives. That’s exactly what makes it a choice place for group travelers.

Can we say that the history of Winston-Salem is a tale of two cities? That’s probably accurate. More than 260 years ago the Moravians, a deeply religious group of German-speaking settlers, came to central North Carolina. The climate and fertile soil held the promise of abundant crops. Two settlements emerged and in 1766 the Moravians established a third, Salem.

The city was established as a trade center for professional craftsmen. It thrived with a focus on pottery, ironworks, cloth- and furniture-making, and a bakery. The traditional handiwork of the Moravians lives on in Old Salem.

About the same time in the late 18th century and just to the north of Salem, a more secular Southern city was emerging. Winston was formally established in the mid-1800s. The city grew with an industrial and entrepreneurial spirit to become a leader in textile and tobacco manufacturing. Successful businesses still thrive today continuing today, from Krispy Kreme Doughnut Corporation, Inc. to nanotechnology.

In 1913 the two prospering cities merged to become Winston-Salem (always with a hyphen) and those early hallmarks that brought the cities together continue today. That’s the Cliff Notes version of the community’s history and culture. It simply sets the stage for the numerous tour options available.

There’s no better place to begin your visit than one of America’s most complete historical attractions, Old Salem Museums and Gardens. Groups have several options for interacting with costumed interpreters. Not to be missed is the Historic Town Tour of Salem’s 18th and 19th century buildings. Or consider the hour-long Twilight Tour through the streets of Old Salem. The Tannenberg Organ Tour gives a behind-the-scenes look at the organ’s history and restoration. You may even get to play the largest organ in existence.

Special-interest tours provide insight into the culture and lives of the early Moravians. There were enslaved Africans and African- Americans in Salem. The St. Phillips Heritage Center tells their story. St. Phillips, founded in 1822 as the African Moravian Church, was renamed in 1914. The original worshipers were mostly enslaved people, making the church one of the oldest African-American congregations in the nation.

For smaller groups (8-20), a guided Garden Tour, possibly combined with a Garden Workshop, may be of interest. Garden Workshops are held regularly on a variety of topics.

The Museum of Early American Southern Decorative Arts (MESDA) at Old Salem is an important part of any visit. A variety of tours is available and MESDA is happy to arrange something for a group’s special interests. At the very least groups should schedule the 45-minute “Southernisms: People and Places” tour, which showcases 12 galleries spanning craftsmen from Jamestown to the American Civil War. Ceramics, furniture, paintings, silver and textiles each tell the history of the South and its various cultures and lifestyles. (oldsalem.org)

While Old Salem and MESDA reflect Salem, another tour option represents Winston. In 1917 Richard Joshua Reynolds, the founder of R. J. Reynolds Tobacco Co., and his wife Katharine moved to what is known today as Reynolda House Museum of American Art. Reynolda House is one of the few remaining examples of the American Country House movement, large self-sustaining homes with extensive recreational facilities. With the deaths of R.J. shortly after moving to Reynolda House and Katharine in 1924, the house was not occupied until 1934 when their daughter Mary and her husband Charles Babcock, Sr. purchased the other sibling’s interest.

In 1962 Charles established the non-profit Reynolda House, Inc. The Reynolda House Museum of American Art became a leader in the collection of period art dating back to 1775. There are more than 300 works from paintings and drawings to photography and sculpture. The interior of the house is itself a piece of art, with furnishings, toys and decorative arts among visitors’ favorites.

In addition to small, changing exhibitions in the house’s galleries, major exhibitions are regularly scheduled in the Mary and Charles Babcock Wing Gallery. From Aug. 23 to Dec. 31, The Art of Seating: Two Hundred Years of American Design will feature more than 40 pieces that tell the story of the design of American chairs. George Catlin’s American Buffalo (Feb. 23 to May 3, 2015) will display 40 paintings of the America West. (reynoldahouse.org)

If you’re looking for more art treasures, you’ve certainly come to the right city. Located on the campus of Winston-Salem State University in the O’Kelley Library’s lower level is the Diggs Gallery. Identified as one of the Top 10 African-American galleries in the United States, Diggs Gallery showcases African and African-American art.

Since its opening in 1990 the Diggs Gallery has experienced significant growth, adding paintings, prints and sculptures to its permanent collection. The Sculpture Garden and Biggers Murals are highlights of the collection. (wssu.edu/college-arts-science/diggs-gallery)

When communities have active art scenes, are good dining and drink also prevalent? Obviously yes, and Winston-Salem is no exception. More than 35 nearby Yadkin Valley wineries, a craft brewery and more than 100 restaurants are proof of the art, dining and drink trilogy.

Less than 30 miles away, Westbend Vineyards offers tastings and tours and is the perfect setting for a picnic lunch. Downtown Foothills Brewing invites groups to stop by for a brew and a look at their artful posters and labels. Their “Sexual Chocolate” offering appears to be a favorite.

The restaurant scene is every bit as vibrant and Visit Winston-Salem will be delighted to direct you to a choice of lively, independent restaurants in downtown Winston-Salem. From Southern home cooking to Mediterranean style, there is an endless number of options to excite your palate. A favorite located in the Downtown Arts District is Sweet Potatoes – The Restaurant. Their chefs not only made “shut my mouth” a rave review, but selected it as the title for their cookbook.

Regardless of the time of year you visit, you’ll find the welcome mat is always out in Winston-Salem. Exciting destination, themed and seasonal itineraries are online at visitwinstonsalem.com. Certainly, though, any Winston-Salem itinerary should begin at the Visitors Center for complimentary coffee and Krispy Kremes.