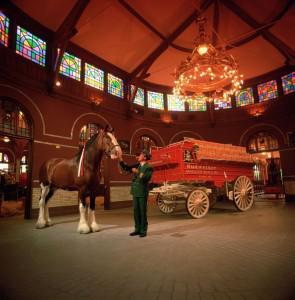 I’m always on the lookout for locally made food and drink, and a recent trip to St. Louis was no exception. As soon as my son and I crossed the Mississippi River from Illinois, we made a beeline to Anheuser-Busch Brewery, the home of Budweiser beer, and caught the 3:10 p.m. tour. Walking between massive red-brick buildings in a group of 50 or so, we took in heady whiffs of malted barley and learned how they mix grain, hops, water and yeast to brew the “King of Beers.”

Our free tour, one of the most popular factory tours in America, started at the Budweiser Clydesdale stables, a National Historic Landmark, where we saw a few of the iconic 2,000-pound horses that pull the bright red beer wagon in parades around the country. Then we toured the beechwood aging cellar, where each huge tank, lined on the bottom with beechwood chips, holds the equivalent of 200,000 six-packs. The tour also includes the stately 1891 Brew House and the 1917 packaging plant, where cans and bottles are filled on a vast network of conveyors. The complex is located just south of downtown.

After boarding a trolley taking us back to the visitor center, we were rewarded with product sampling in the hospitality room, the place everyone was waiting for. We could choose from eight different beers on tap, including Anheuser-Busch brands like Shock Top, Beach Bum and Michelob as well as different styles of Budweiser. The limit is two drinks per guest; soft drinks are available for youngsters and non-drinkers.

Then it’s on to the gift shop, which sells everything from Budweiser T-shirts and other logo wear to beer glasses, coaster sets and Clydesdale stuffed animals. We put together a six-pack of assorted beers made by Anheuser-Busch and affiliated units throughout the world, choosing exotic brands like Leffe (a Belgian ale), Czechvar from the Czech Republic and Wild Blue, a blueberry brew.

Before or after the brewery tour, guests peruse the exhibit area next to the gift shop. They can view TV and print advertising over the years, admire the German beer stein collection and learn about the history of Anheuser-Busch, founded in 1852. During Prohibition (1919-1933) the St. Louis-based company made non-alcoholic products to stay in business—things like root beer, ginger ale, ice cream and malted barley syrup for baking. (The name of another city landmark, Busch Stadium, also reflects the brewing giant’s ties to St. Louis, but Anheuser-Busch hasn’t owned the Cardinals ball club since 1996.)

Groups of 15 or more need to make reservations for the daily tours, which can accommodate up to 50 people from one group. Larger groups will need to split up. In addition to the free tours, the special Beermaster Tour, limited to 10 visitors, provides behind-the-scenes peeks and a few gifts. Cost is $25; offered several times daily. (314-577-2626, budweisertours.com)

Another beer fan’s option is Schlafly Bottleworks, a small-batch craft brewery in suburban Maplewood. The free, one-hour public tour, offered Friday through Sunday, is limited to 25 guests, but special group tours can be arranged Monday through Thursday (email tours@schlafly.com). Tours include exhibits on St. Louis brewing history and time for sampling the lagers and ales.

Root beer takes center stage at Fitz’s American Grill & Bottling Works in the Delmar Loop neighborhood, a lively dining/entertainment hub. Free tours of the nostalgia-filled restaurant, especially popular with student groups, include watching the vintage root beer bottling line, which mixes, fills, caps and labels every single soft drink the company produces. (Check ahead for the operating schedule.) Dating back to the 1940s, the rare equipment is easily viewed from the main dining room. An introductory presentation covers the history of the Loop and of root beer.

Your group will probably want to stay for lunch and enjoy a burger and root beer float. We feasted on the classic House Float, a four-scoop pyramid of vanilla ice cream perched on a glass mug with 11 ounces of Fitz’s creamy smooth root beer, a brew sweetened with cane sugar, not corn syrup. As soon as they arrived, we whipped out our cameras. The Mississippi Float uses chocolate ice cream, while the Java has cappuccino.

Baby boomers in St. Louis fondly recall the original Fitz’s, a drive-in root beer stand operated for 25 years by James Fitzpatrick. He retired in the early 1970s, but his special root beer recipe was rediscovered in the late ’80s and in 1993 Fitz’s American Grill opened on Delmar Boulevard.

Besides hamburgers, popular menu items at Fitz’s include pulled pork and club sandwiches, macaroni and cheese, sweet potato fries, deep-fried pickles and onion rings. Toasted ravioli, those little pillows of pasta that have become a St. Louis signature food, make a good appetizer. The restaurant has an outdoor patio, a counter with stools, and an upstairs bar with billiards and games. (314-726-9555, fitzsrootbeer.com)

Whether your tastes lean toward beer or root beer, St. Louis is the place to lift a glass and watch it made.