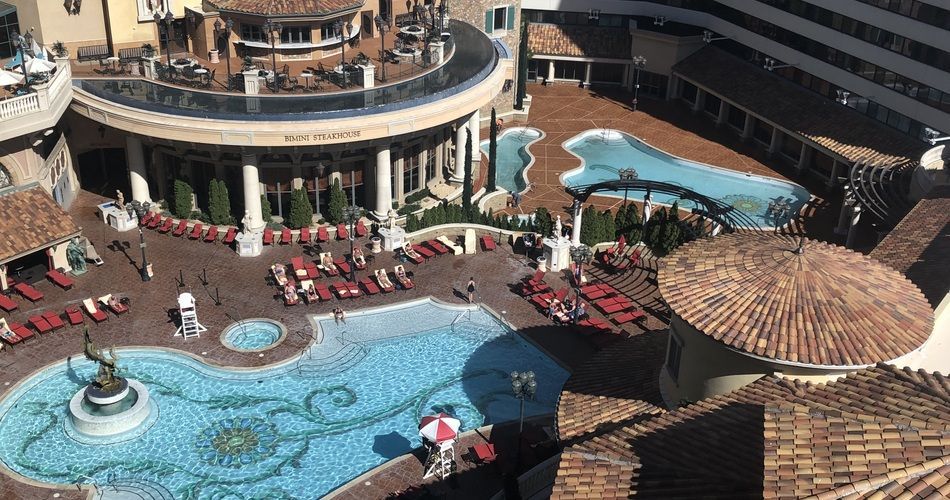 Exploring the public rooms and pool courtyard soon after my arrival at the Italy-themed Peppermill Resort Spa Casino in Reno, I was trying not to gawk. The place was so jaw-droppingly exquisite, however, that I couldn’t help myself. It was like stepping into a grand palazzo and a Tuscan village all at the same time.

The 1,621-room Reno Peppermill combines the glitz of Reno casino hotels with nods to the Old World. Inside and out, the Nevada resort’s Italian flavor is always there to savor, from the rustic stonework and vast expanses of marble to statuary reminiscent of the Renaissance and ancient Rome, from red-tile roofs and stately colonnades to murals of the idyllic countryside and great cities of Italy. Indeed, there’s a sense of refinement not found at other Reno casino hotels.

Italian Fare and Other Culinary Delights at the Reno Peppermill

One night at Romanza, the Reno Peppermill’s Italian fine dining restaurant, I feasted on a decadently creamy chicken and gnocchi soup, a main course of meat-stuffed cannelloni smothered in cheese and bechamel sauce, and a basket of artisan breads, all washed down by a bottle of house-made limoncello. Under a celestial ceiling of clouds and twinkly lights, a rotating ensemble of classical statues and a torch show every half hour created some drama. For dessert, I stopped at Biscotti’s Cafe for salted caramel gelato. 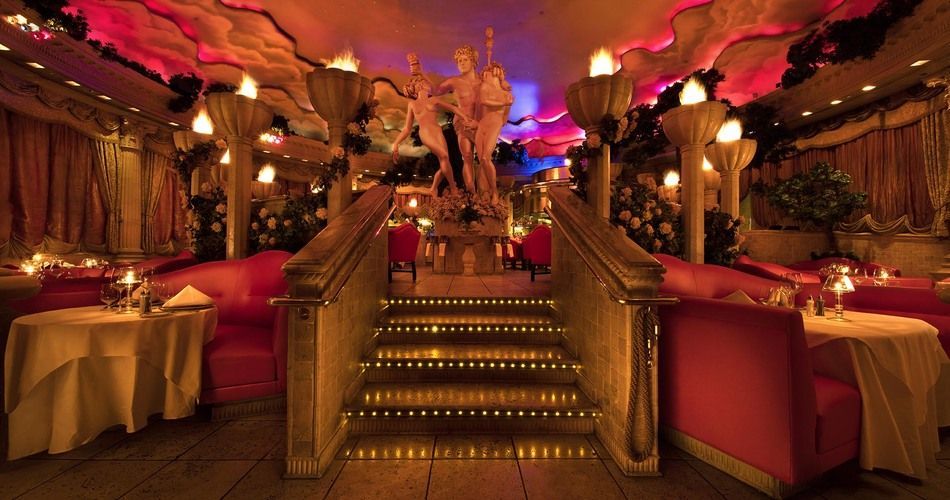 The AAA Four Diamond property has 10 restaurants, including the swank Bimini’s Steakhouse and the brand-new Sabroso taqueria, a fast-casual Mexican eatery offering traditional favorites like tacos and burritos. Other restaurants include:

“Art of Cuisine” video screens throughout the Reno casino hotel tempt palates with mouthwatering images of chefs grilling shrimp, lemons being sliced, and cupcakes being frosted. At “Dining Options” digital display stations, restaurant menus appear at the touch of a finger.

Gaming Action and Nightlife at the Reno Peppermill Casino Hotel

The Sports Deli at the Peppermill casino hotel in Reno, specializing in sandwiches stacked mile-high with meats and cheeses, is next to Race and Sportsbook’s high-definition theater, which has over 100 screens, nine express betting windows, 24-hour cashier service, and a complete menu of satellite HDTV games for NBA, NHL, NFL, MLB, and NCAA sports, and horse races, too. Race and Sportsbook, fresh from a $3.5 million upgrade, claims to have the largest- and highest-resolution LED display of its kind in the country. The high-tech sports theater features: 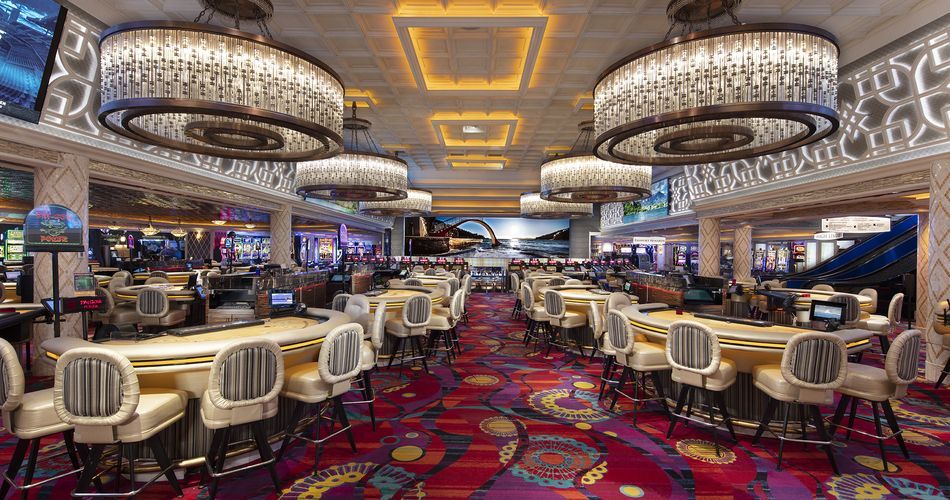 Nightlife choices abound at the Peppermill in Reno. One evening I visited the circular Terrace Lounge, whose tall windows overlook the Tuscan Pools deck, and enjoyed the music of a folk singer accompanying herself on the guitar. Along with a beer flight, I ordered a mixed greens salad from the limited bar menu, a fruity creation loaded with blackberries, pear chunks, dried cherries, smoked blue cheese, and candied walnuts. The lounge’s glassed-in whiskey library—a sign notes that it’s under 24-hour surveillance—includes more than 90 bourbon varieties, many of them rare. Whiskey flights allow a good sampling. National headliners take to the stage on select dates in the nearby Tuscany Ballroom.

Stunning videos on several thousand high-definition screens provide captivating touches to the restaurants, casino floor, and other public areas. The Peppermill’s own videographers travel the globe to capture images of bucket-list destinations, including world capitals, African game reserves, and American national parks. Whether it’s intrepid rafters careening down a wild river or the sun rising over the Great Wall of China, these mesmerizing “Windows of the World” scenes—many of them aerial drone shots—bring back vacation memories or fuel wanderlust for places in your dreams. At selfie stations here and there, the footage remains on the screen for two minutes, giving you time to pose against a Norwegian fjord or “mingle” with giant tortoises in the Galapagos Islands. Travel photography also adorns the walls of guest rooms and hallways, and the videos can be seen on in-room TVs.

Floor-to-ceiling windows in my corner unit in the all-suite Tuscany Tower afforded views of both the pool deck and the Sierra Nevada Mountains. Outfitted with marble-top furniture, plush floral carpeting, and velvety brocade drapery with braided sashes, the spacious 550-square-foot nest seemed more like a drawing room fit for an Italian countess than for a mere tourist like me. Rusticated wall treatment, antique-like lamps, sconces with gold fixtures, and burnished cornices and baseboards added to the Old World aura. The sumptuous bathroom, a sea of red marble, had a 10-foot-long double sink, make-up table with stool, mirrors trimmed in golf leaf, and even a TV. Framed art in the bath and the room itself featured images of Everglades National Park, Ngorongoro Crater in Tanzania, a tree frog from Costa Rica, a statue in Sicily, and a street scene in Edinburgh, Scotland. 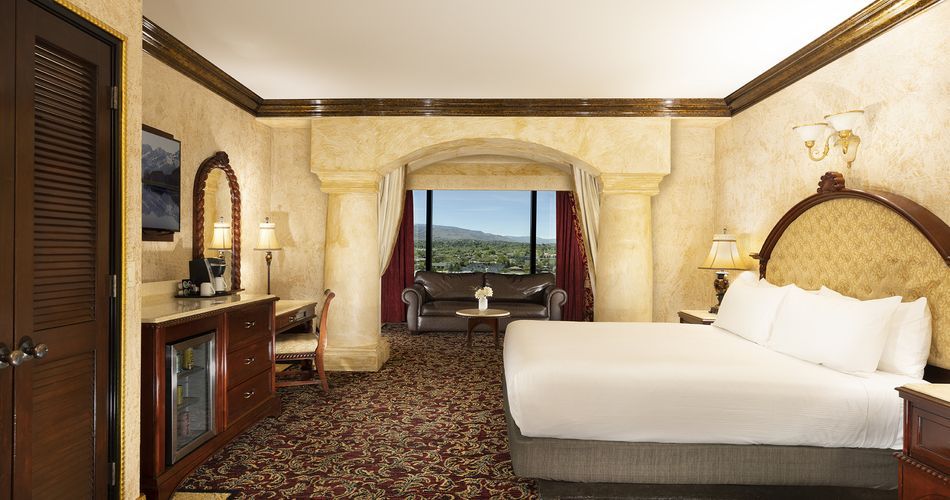 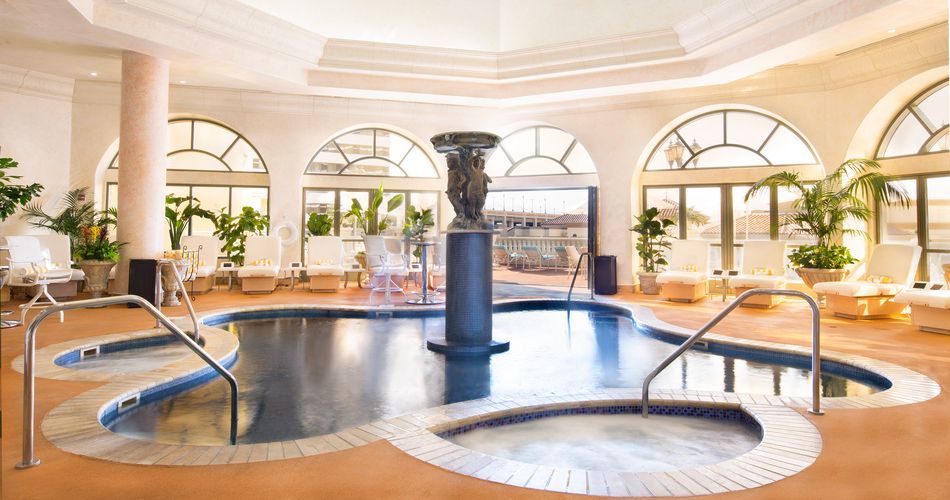 Reno Casino Hotel Offers Relaxation at the Spa or Pool

The Reno Peppermill’s Spa & Salon Toscana draws inspiration from the lavish baths of ancient Rome. With three stories of Tuscan architecture, beautiful fountains, and other water features, the 33,000-square-foot sanctuary has:

The Reno Peppermill also boasts a state-of-of-the-art fitness center outfitted with the latest machines and a separate exercise room equipped with yoga mats and exercise balls.

Eco-minded guests know that the Reno Peppermill is the only U.S. hotel heated completely by an onsite geothermal well. It has invested in many other green initiatives, including the installation of over 40,000 square feet of artificial grass, thus reducing the need for water and the use of chemicals and pesticides.

Peppermill Resort Spa Casino is located a few miles south of downtown Reno on Virginia Street, the prominent artery where the famous Reno Arch declares “The Biggest Little City in the World.”

A sprawling resort offering musical entertainment, gaming action, and dining diversity, the Reno Peppermill is practically a city in itself.

Leisure Group Travel offers additional ideas for your next group trip, and you can Subscribe for FREE for more travel content.