Designed for “sailors” 18 years and older, the new ship plans to make waves in the cruise industry

Virgin Voyages has released more about the first of its three cruise ships, the Scarlet Lady. Currently under construction in Italy at master shipbuilder Fincantieri, the Scarlet Lady will be arriving at PortMiami in 2020 and sailing to the Caribbean. Hosting more than 2,700 sailors and with 1,150 crew members, the Scarlet Lady is being designed around Virgin Voyages’ “Epic Sea Change for All” brand. (Yes, they use the term sailors instead of guests!)

A Dose of “Vitamin Sea” 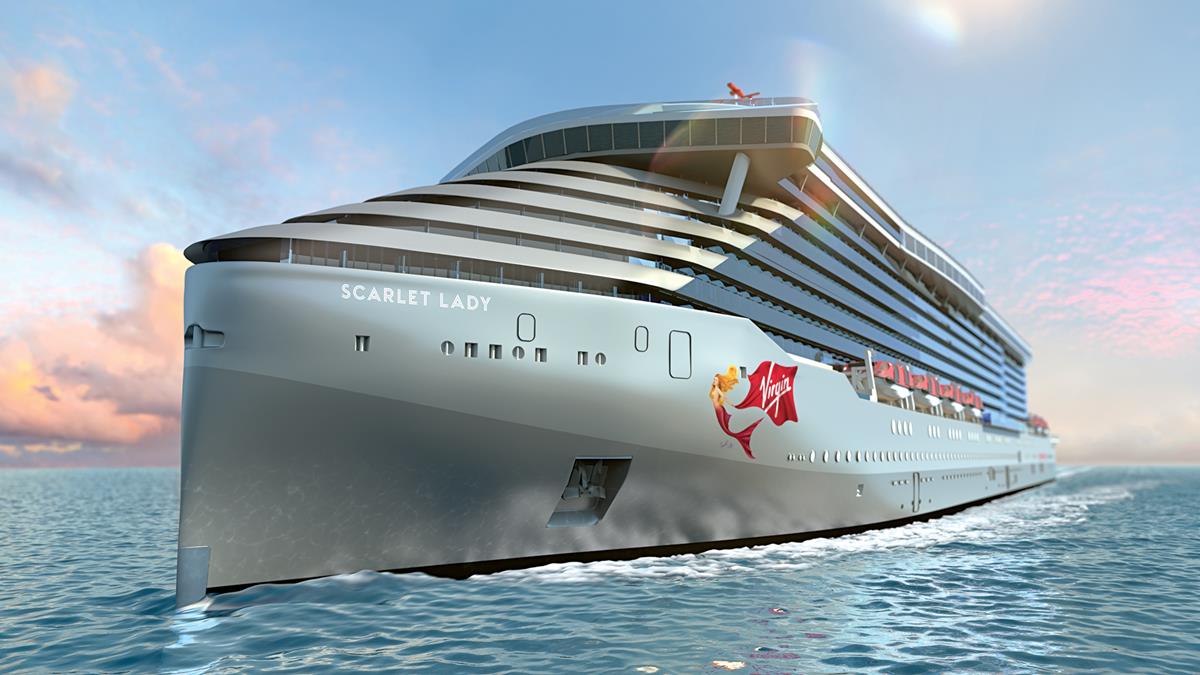 Virgin Voyages is committed to delivering rejuvenating and transformational experiences, which they refer to as “Vitamin Sea.” Inspired by the oceans, a focus on healthy travel is at the forefront of what it intends to deliver. Virgin Voyages is an “Adult by Design” experience, with 18 being the minimum age to sail.
Rather than using just one interior designer, Virgin decided instead to use multiple designers to provide diversity throughout the ship. Creating intimate, alluring spaces, the Scarlet Lady intertwines “Vitamin Sea” throughout, with rejuvenation and relaxation coupled with high-energy moments.

In July, Sir Richard Branson, Virgin Group founder, and Tom McAlpin, president and CEO of Virgin Voyages, announced the company would be eliminating single-use plastics onboard. This includes banning straws, bottled water, shopping bags, stirrers, condiment packets, take-away coffee and tea cups, and food packaging. Complimentary filtered still and sparkling waters will be available at all the bars and restaurants, with Natura filtered water stations throughout the ship. 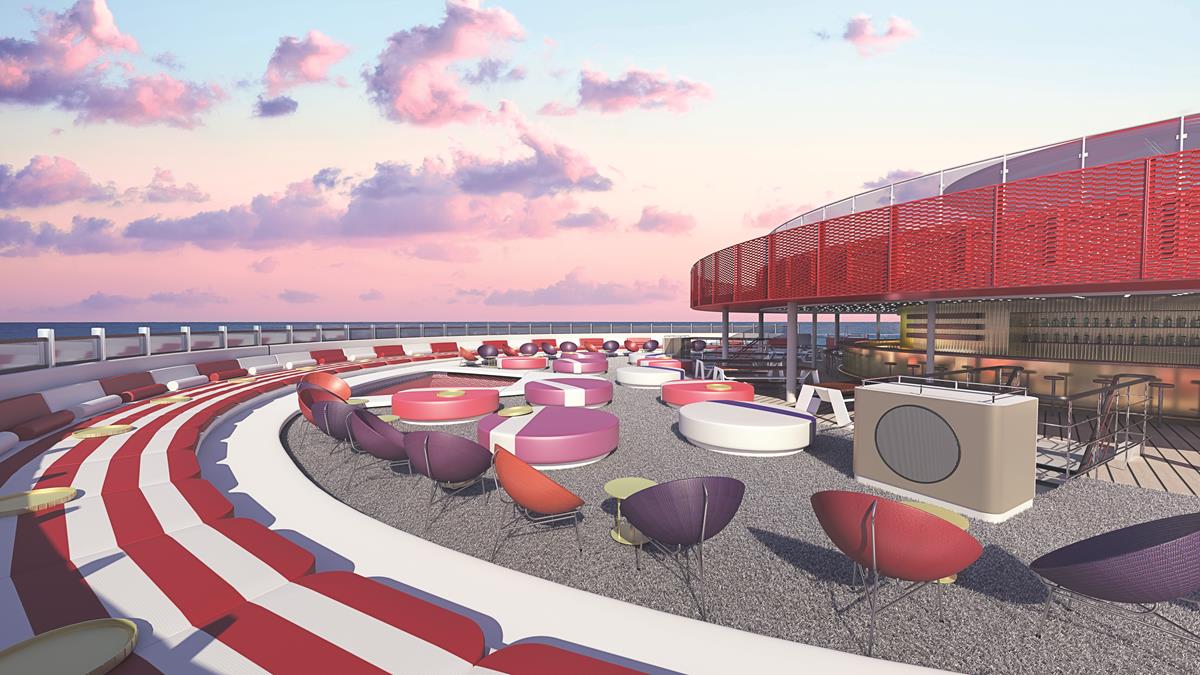 Described as an area of Zen, the Crow’s Nest is a secluded sun deck with a 360-degree view. Adjacent is the Runway, a signature Virgin red running track where sailors can strut, skate or sweat. Linked to the Crow’s Nest and Runway is the Athletic Club.
Located at the back of the ship, The Athletic Club is an outdoor lounge area providing adult-play plus relaxation, with yachting glamor and traditional nautical elements. It also includes the largest daybed at sea, a white-and-red-striped semi-circular lounger where sailors can enjoy sunbathing during the day and stargazing in the evenings. Adjacent is a 220-square-foot area of triple netting where sailors can lay out and overlook the open space and decks below. It’s as if they are actually sailing on a catamaran. The Athletic Club area also has 10 cabanas, a sports bar, and an outdoor training zone that includes strength and gymnastics equipment.

The B-Complex features diverse fitness and well-being experiences, – spin, yoga, strength and cardio – in its Burn, Bike, Build and Balance rooms, all featuring wonderfully dramatic ocean views. Providing on-demand fitness, the Burn and Build rooms are equipped with Technogym ARTIS, a line of cutting-edge fitness technology. Sailors can enjoy the Well-being Pool, which has a Venice Beach-like atmosphere, along with fresh, cold-pressed juices that are served at both the Tonic Bar and the Gym. 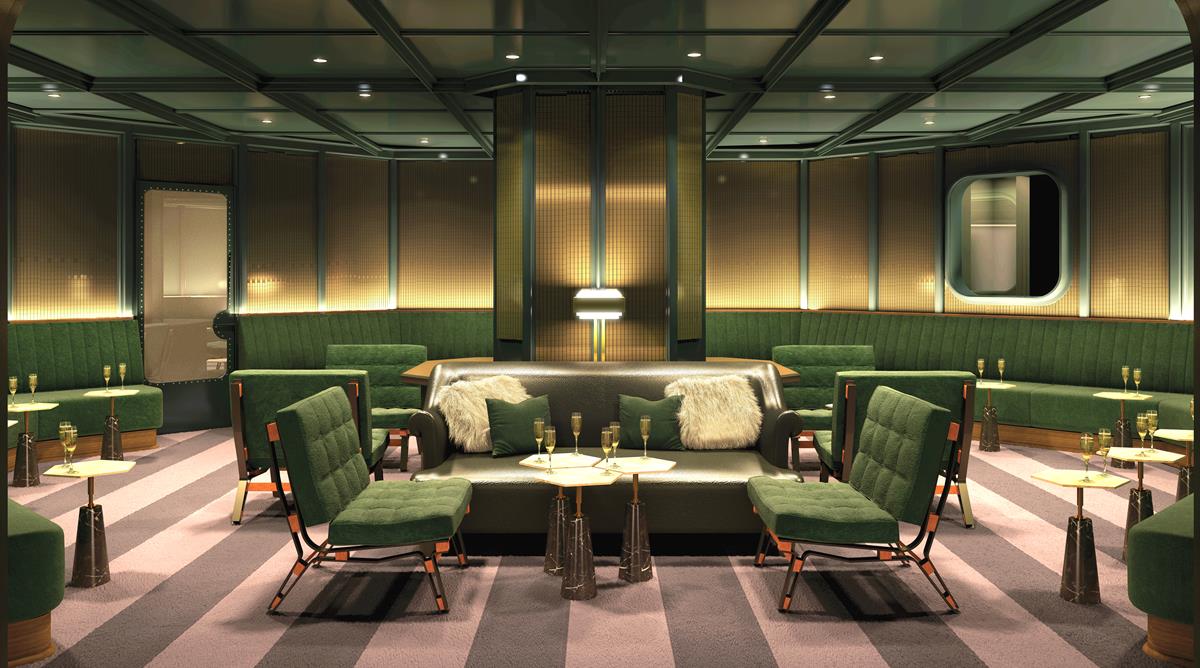 As the signature nightclub for Virgin Voyages, The Manor has been inspired by Sir Richard Branson’s history in the music industry. His first Virgin music studio had the same name. Featuring emerald and aubergine undertones along with gold accents, The Manor will offer glamor and glitz.

Located on Deck 5, Redemption, the ship’s spa has been inspired by an underwater cave. It has a hydrotherapy pool, salt room, mud room, quartz beds and cold plunge pools as well as rejuvenating spa treatments. At night Redemption will have evening spa parties, complete with a DJ, transforming the area into a “mermaid hideaway extravaganza.” 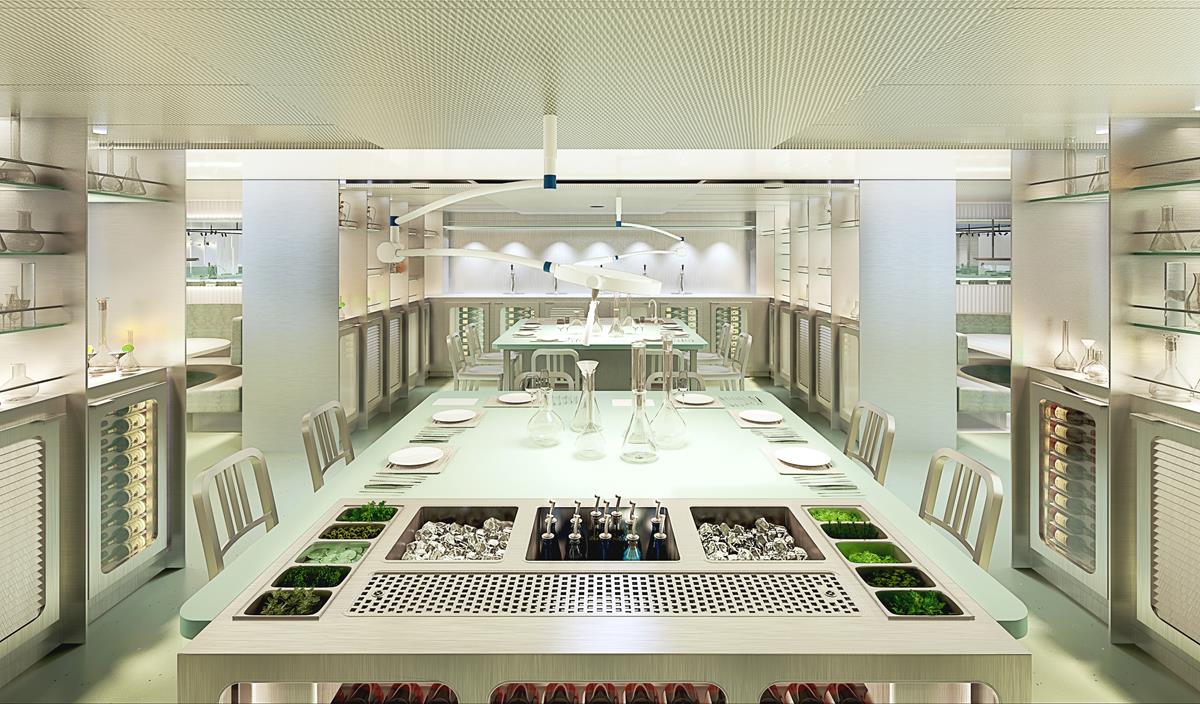 Dining options announced so far include the Test Kitchen and Pink Agave. Designed by the team at Concrete Amsterdam, the Test Kitchen’s inviting entryway has lighting images that mimic the periodic table. Its laboratory-like environment has metallic furniture and sleek clean lines along with some fun touches – test tubes, beakers and volumetric flasks.
The Pink Agave is an upscale modern Mexican restaurant that will feature a bar area in the foyer and a private dining room for larger groups. In the center of the room is an elongated curved lounger, with round tables for two providing an intimate dining experience. Additional dining details will be revealed at a later date.

The Dock, an Outdoor Lounge 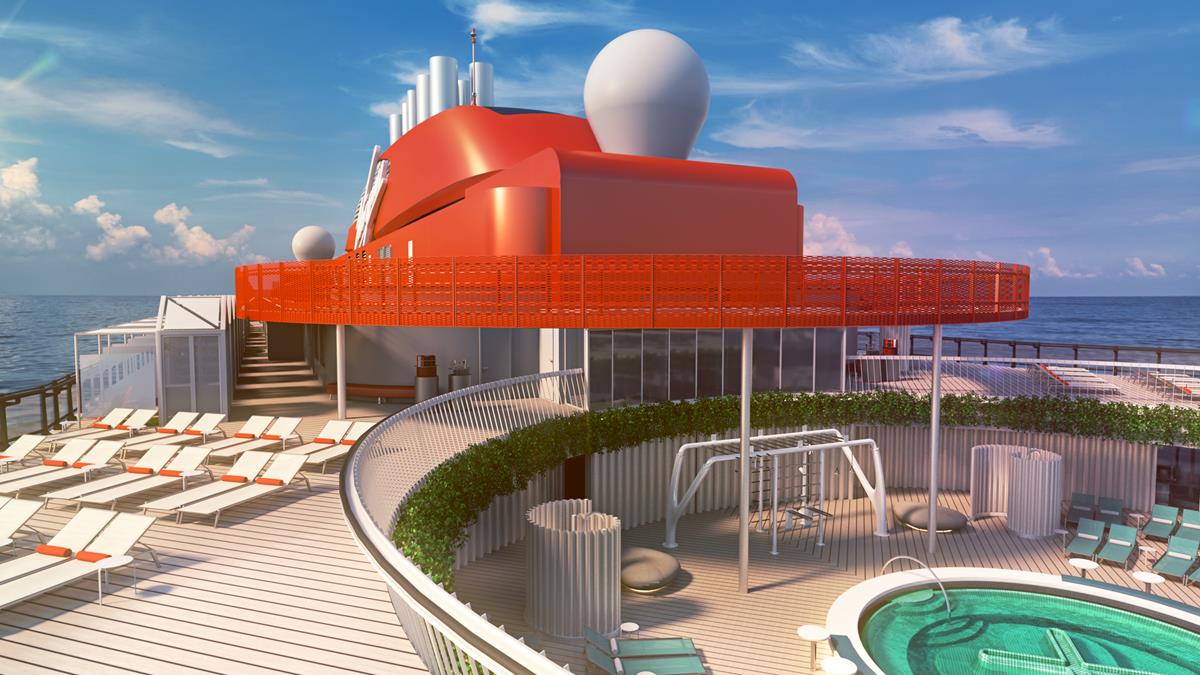 Located on the aft of Deck 7, The Dock is an outdoor lounge area that focuses on socializing and relaxing as well as appreciating the views Scarlet Lady will be providing. The masterminds behind The Dock (Roman and Williams) wanted to create a space where sailors could enjoy the sun, the sea and sailing during the day as well as the serenity during the evening and night.
By Cindy Bertram
Cindy has 15+ years of cruise industry expertise in marketing, content creation, sales and training as well as social media. Her MBA from Loyola University Chicago complements her high creative edge and liberal arts BA. She can be reached at cindy@ptmgroups.com.