Up a Lazy River: Calm-Water Cruising Rides a Wave 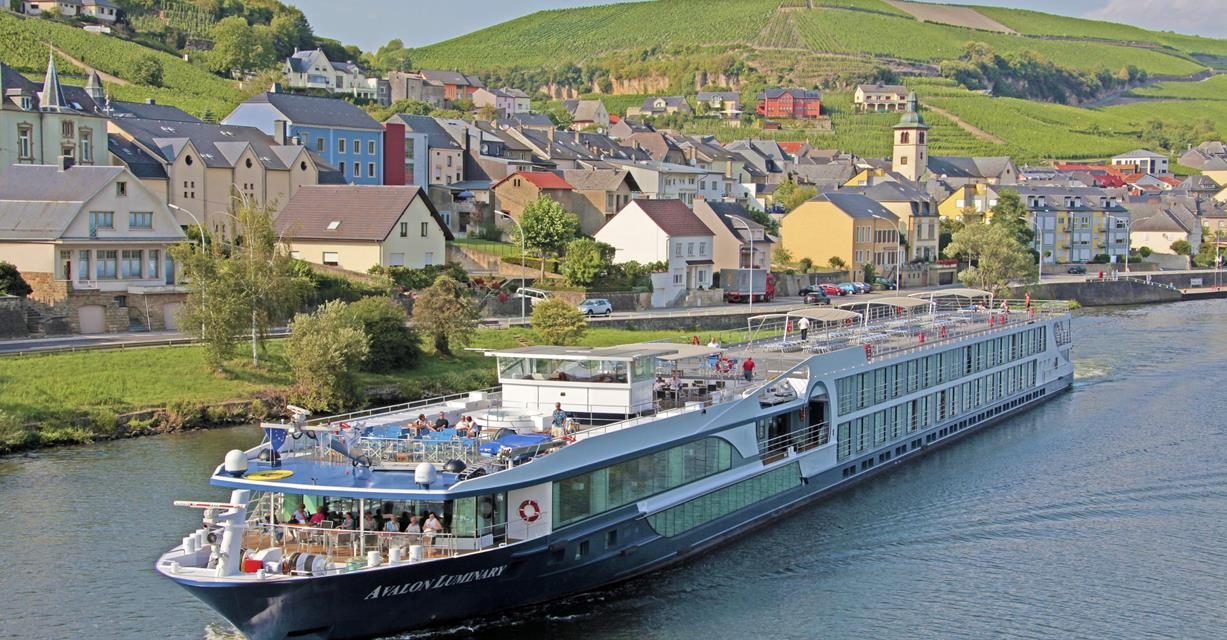 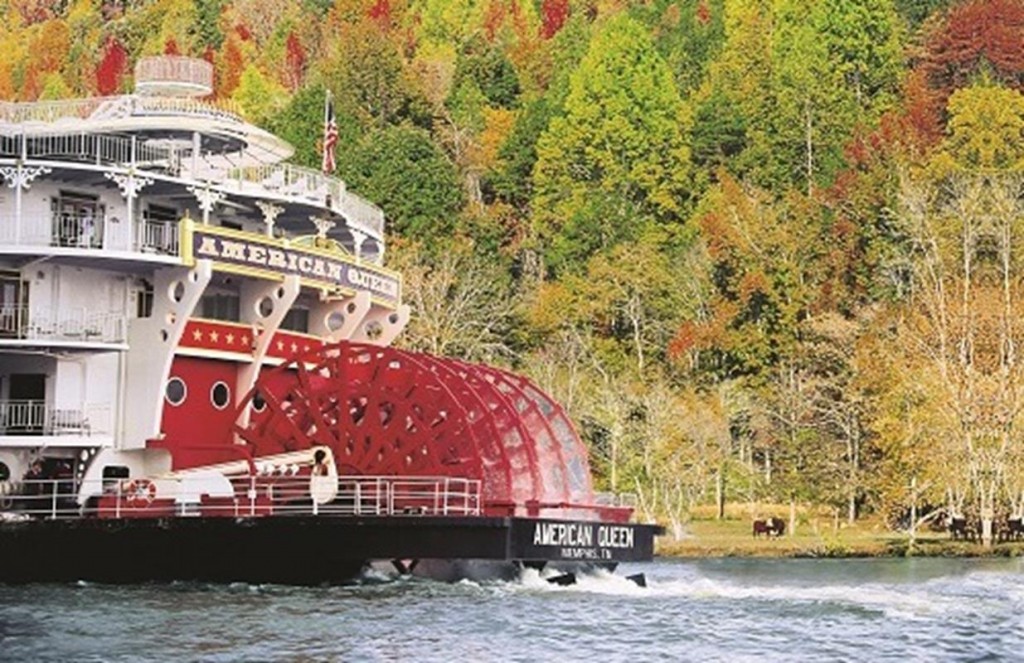 “Your true (river) pilot cares nothing about anything on earth but the river, and his pride in his occupation surpasses the pride of kings.” –  Mark Twain, Life on the Mississippi

Have you booked your group on a river cruise yet? If not, it’s high time you did so because this particular genre of travel is proving the hottest type of travel product around. In fact, it’s proving to be so popular that some companies are already well-booked for 2015 and are now taking reservations for 2016.

Of course, travel on the rivers of the world has been around long before we were. You may recall seeing drawings of Cleopatra on her royal barge as she traveled the Nile. And certainly in our childhood studies we may have learned how early civilizations used the rivers as we use our highways today – to ship goods and as people movers. But probably nobody expected the popularity of today’s river cruises nor the rush to build more and more river cruise ships as fast as shipbuilders can turn them out. And with the opening of the 106-mile Main-Danube Canal in 1992 we can now cruise from the North Sea all the way to the Black Sea – some 2,200 miles – plenty of room for cruises long and short. 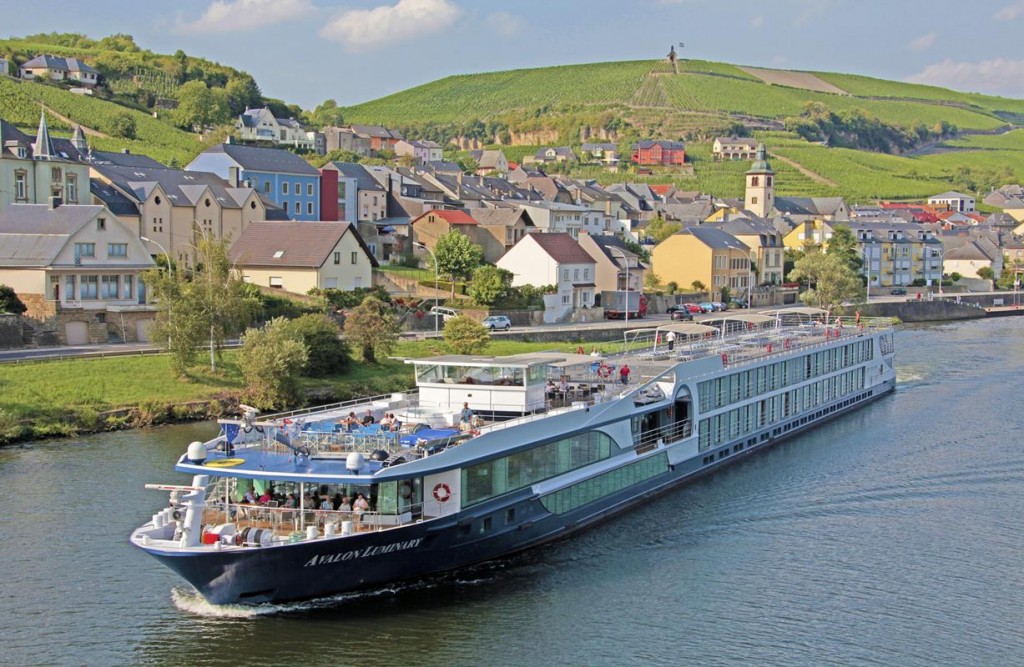 Avalon Luminary on the Moselle in Luxmbourg

Why are river cruises proving so popular? Well, one reason may be that in most instances, river travel is known for its s-m-o-o-t-h sailing, unlike the ocean-going experience which at times can be a challenge in rough waters. I recall my first ocean crossing from New York to Liverpool, England in November weather long before stabilizers; my mother took to her bed and stayed there for the entire trip, nauseated and miserable most of the time. I braved going to the dining room for my meals and became accustomed to my tableware sliding to the right, then to the left. Indeed, river cruising can be a totally different experience than ocean cruising. 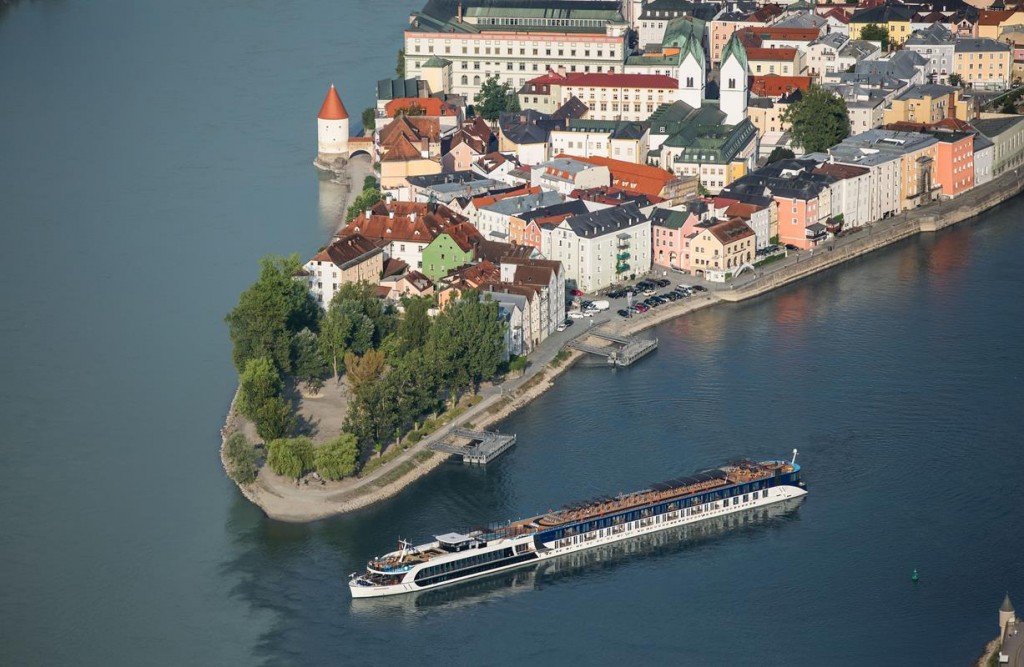 Also, most ships designed for river cruising are built to accommodate anywhere from 60 to a maximum of 200 passengers – a friendly and easy-going number. Everyone eats dinner together – no rushing you through the early sitting to make room for the late sitting to follow. It’s just one gracious, casual and leisurely evening meal that we can enjoy with fellow travelers as we catch up on the day’s happenings.

Ask anyone who has been on a river cruise after previous experiences on motorcoach tours and they’ll tell you that one thing they really like about river cruises is that you unpack when you first arrive on board and you don’t have to pack and unpack throughout the trip until the last day when you pack up to head homeward.  No time wasted with checking in and out every few days as on a coach tour because on a river cruise your “hotel room” literally moves with you. 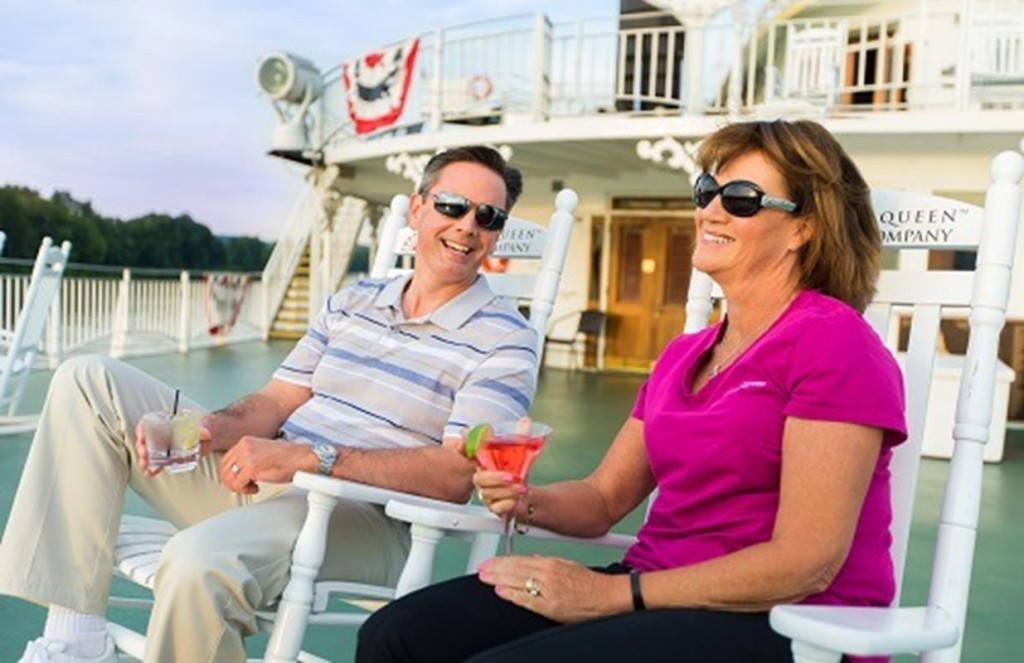 River cruising is close to shore, so you can see the landscape, people and points of interest as you glide by. Your boat can pull in to dock at riverside towns and you can walk off your ship on to the town square to enjoy markets, famous sights, cafes, appealing shops and perhaps nightlife with the locals. This is a very different experience from life on the big ships where you may have to stand in line forever with thousands of other passengers to get on and off the ship.

Another wonderful advantage of river cruising is that most companies include shore excursions in the total package price. A few lines may have occasional additional optional tours for purchase, but the basic excursions are usually already in the cruise cost and pre-booked for everyone – no confusion as to which shore trips you should take and which not, no having to incur additional expenses continually as you go along.

Of course, there’s no law that one has to participate in all shore excursions. If a group member would rather just relax on board with a good book, or write postcards or take a nap   – no one is reporting home on their inactivity. A river trip can be as strenuous or as lazy as one makes it.

Cultural events are often included as well, as most river cruise line officials want you not only to have an enjoyable time but also want you to learn about the history and culture of the area you’re seeing.  On a river cruise I took to Russia, the cruise line arranged for us to attend a fabulous symphony concert in St. Petersburg, a Cossack dance performance, a cooking demo on board and other such activities. To this day I remember a trio of men with deep, deep bass voices who sang for us in a tiny church. All of these activities were in the basic trip cost.

One of the best things is that the new made-to-order river ships feature cabins designed like hotel rooms for comfort, with big picture windows or balconies for maximum viewing without ever leaving your room. The ships are designed so that there are almost no inside cabins. 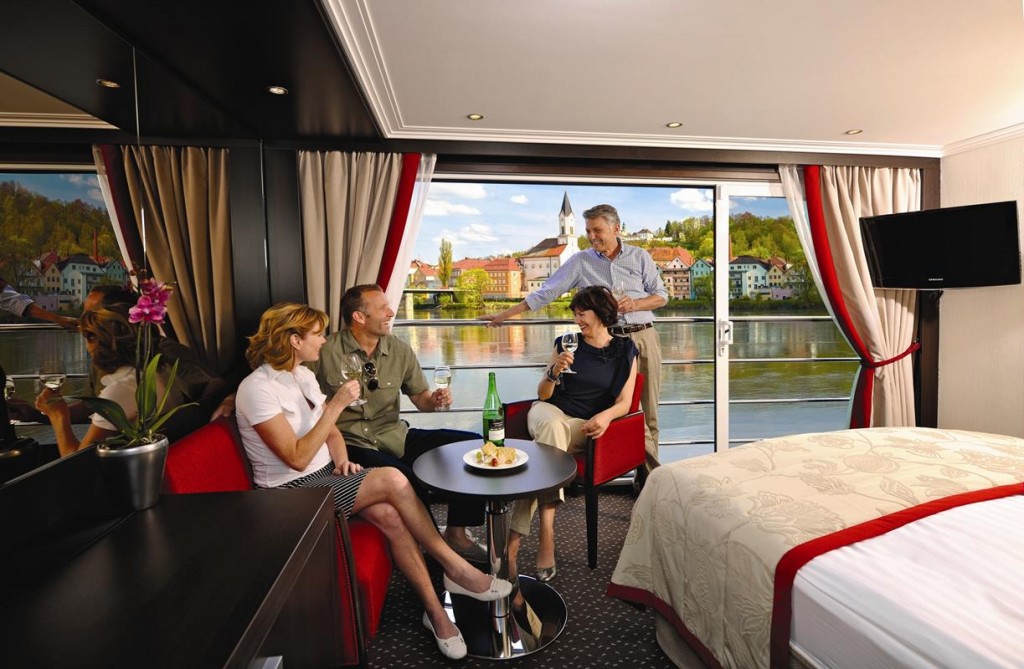 Note that since there are rivers virtually everywhere, nowadays the river cruise phenomenon is happening around the world. Here in the U.S we have wonderful Mississippi sternwheeler cruises complete with Dixieland jazz. We have a homegrown, family-owned company with shallow-draft vessels cruising the Hudson and along the Erie Canal. There are now Southeast Asia tours with river cruise segments in Myanmar (Burma) on the Irrawaddy, in Venezuela on the Orinoco or across Northern Italy on the Po. And, of course, we have an endless selection of cruises throughout Europe – both West and East.

So if you’d like to offer a river cruise to your favorite group or club or organization, where and how should you begin? While many companies will take bookings directly from the public, most prefer to handle your group through an experienced travel agency. You’ll probably want to review a brochure or the website of several companies that offer cruises to the area of the world which you think will most appeal to your potential group. Note the choices are not only where you want to cruise but also what special interests your group may have. Many companies are designing trips around a theme such as food and wine, gardens, inter-generational travel, history and many more. 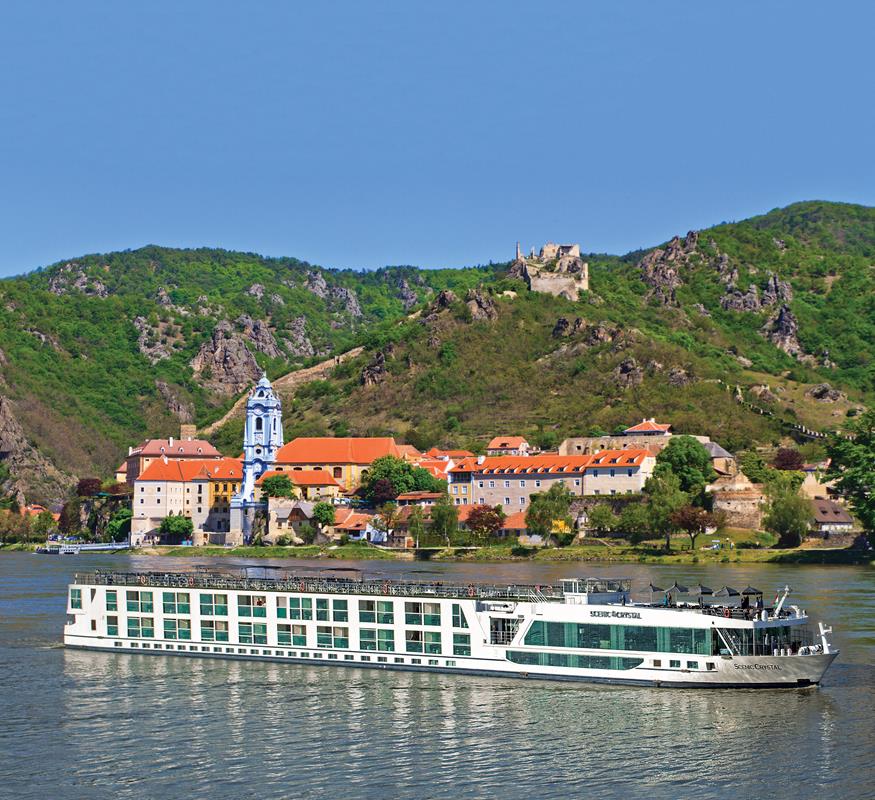 A word of warning – most river cruise lines will expect you to promote your group quickly once they have given you a block of space, even if it’s a departure well into the future. Since many sailings are going out full, they will not be interested in blocking group space that you are not going to promote until much, much later. In fact, if they don’t see any promotional efforts on your part, they may notify you that they’re going to cancel your space.

Another “heads up”– while most cruise lines don’t require an advance deposit to block your space,  they will require a deposit for each traveler as he/she joins – often at least $500 per person. And it will be necessary that those who wish to share a cabin come with their own roommate (or you put roommates together) as the cruise line will not assume responsibility for locating roommates and the single room supplement is often steep.

River cruising is a phenomenon we should all try. Once you’ve tried one itinerary, you’ll want to come back for more of the many rivers and itineraries that await.