Top 5 Shrines and Temples to Visit in Hiroshima: Guide to Japan Travel 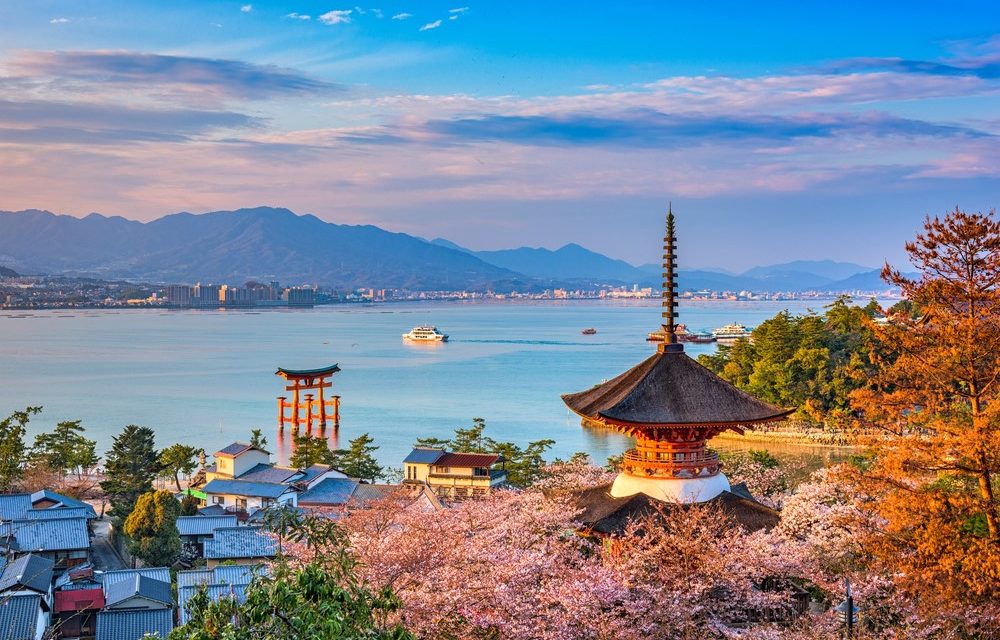 Japan is a culturally rich country, with a history spanning 100,000 years. One of the pillars that upheld this ancient society was its religious development. The two most prominent religions are Shinto and Buddhism, with countless shrines and temples that cover the country in association with these belief systems. One does not need to be fully immersed in either religion to recognize the natural wonder and beauty surrounding these sites. Each year, shrines and temples host festivals and blooming scenery, from fall leaves to famous cherry blossoms, travelers can’t miss stepping into these historic shrines in Hiroshima.

This Buddhist shrine is located on the south-east end of Hiroshima and has many legends surrounding it. Lore claims that Kobo Daishi, a famous Buddhist priest, was involved in building the temple and an enormous rock called “Tama no Iwa” used to have a large glittering gem on top that would guide ships. To reach this shrine that is situated on a sheer cliff, there is a ropeway which also leads to observation points atop Mt. Senkoji that overlooks the town of Onomichi and the Seto Inland Sea. Climb high above Hiroshima and explore the picturesque belfry at the Senko-ji Temple.

Located north of Hiroshima City, the wooded area of Mount Mitaki includes a teahouse with traditional Japanese foods, three waterfalls and hiking trails. In autumn, the Mitaki-dera temple is a wonder to visit, as the trees that surround the shrine bloom a vibrant red. This is a historic place to explore after a visit to the Hiroshima Peace Memorial Museum or Atomic Bomb Dome. The temple itself is dedicated to Kannon, the Goddess of Mercy, and contains memorials to victims of the atomic bomb such as a historic pagoda from Wakayama and protective Jizo statues. Groups can explore and reflect at this quiet temple in the mountains of Japan.

This shrine was built just 60 years ago to honor Taira no Kiyomori, who was the head of the Heike clan featured in the famous Heike Monogatari. Although Kiyomori was portrayed as a villain in the story, his historical importance and achievements are celebrated by the locals. The landscape is lined with pine trees and stone lanterns and serves as a viewpoint for Itsukishima shrine and its famous floating torii gate. The sandy beach offers a unique view of Miyajima island, as well as a teahouse where one can enjoy the ocean views.

The Itsukushima Shrine is the main attraction of Miyajima Island and is connected with the world-renowned floating torii gate. Shinto torii gates represent the transition from the everyday to the sacred, and this particular gate is famous for its location in water. This holy site was selected by Taira no Kiyomori for his clan’s family shrine during the Heian period of Japan, solidifying its historical and cultural significance. In March, there is a costume parade of a prayer procession from the Heian period honoring the Heike clan and its leader, Taira no Kiyomori held at the shrine. Walk in the footsteps of history as you experience the visual and spiritual wonders of Itsukushima.

This 1200-year-old Buddhist temple is the oldest shrine in Miyajima and is located at the base of Mt. Misen. It has striking visual features such as the 500 Rakan statues, each with unique facial expressions. There is also a set of steps that have Mani or prayer wheels with sutra carvings that are believed to bless whoever spins them. The Henjotsu cave contains Buddhist icons of 88 temples, part of a sacred pilgrimage route and is believed to give blessings to visitors as if they had actually walked to all the temples on the route. This shrine is sure to bring luck to any visitor as they view the numerous statues and prayer halls in the Daisho-in Shrine.

Miyajima island encompasses three of Hiroshima’s famous shrines: Daisho-in, Itsukushima and Kiyomori, with Senko-ji Temple being nearby. The island is located about 40 minutes away from Hiroshima by train and ferry, however if groups or tourists book the Miyajima package through the Grand Prince Hotel in Hiroshima, they can receive breakfast and a voucher for a high-speed boat that reaches these shrines in 26 minutes. This modern hotel offers groups exquisite banquet rooms essential for any meeting or event. View the historical shrines and floating torii gate with ease as you enjoy the luxury of Seto Inland Sea.