From ancient cathedrals to rousing nightlife, the cities of Cologne, Bonn, Dusseldorf, Essen, Bremen and Bremerhaven abound with intriguing sights and fun experiences that will spice group tour itineraries in western Germany. 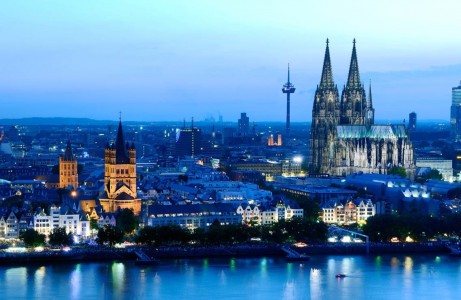 Cologne’s twin-spired Gothic Cathedral is the most visited attraction in Germany, annually drawing up to six million people a year. Construction of the church began in 1248. Photo courtesy Cologne Tourist Board

Who hasn’t heard of Eau de Cologne, that unmistakable wonder water that makes women feel like a million dollars, and makes men spend millions of dollars?

Some may not realize that the 200-year-old fragrance actually originated in Cologne, a city of one million in western Germany. If you take a pen and draw a straight line from Cologne north and south, you’ll touch on Bonn, Düsseldorf, Essen, Bremen and Bremerhaven, prime cities just made for tour groups. The list of things to see and do in these cities is extensive.

At 4711 Glockengasse in Cologne, the invigorating fragrance of the original Eau de Cologne permeates the building, centrally located between the Cologne Cathedral and Neumarkt. The address of the original house where it was first concocted is on the list of important attractions in Cologne.

The biggest attraction in Cologne and in all of Germany, though, is the impressive Gothic Cologne Cathedral, which attracts six million visitors each year. The largest church in the country, it can hold 20,000 people at one time. Construction on the huge cathedral began in 1248 and was completed in 1880.

It is said that the remains of the Three Wise Men are preserved in the cathedral, brought there by Archbishop Rainald von Dassel after 1164. In 1996 the cathedral was declared a UNESCO World Heritage Site. Be sure to check out the “underground” cathedral as well, where hidden treasures await.

Many other attractions are concentrated within a half square mile in the Old Town area, including the Town Hall, Romanesque church of Gross St. Martin, Roman Dionysius Mosaic and Jewish ritual bath, the Mikveh. A dozen large Romanesque churches are set in a semicircle around the city center; they were built between 1150 and 1250. In total, Cologne has 244 churches.

In the Roman-Germanic Museum, evidence of the first centuries of the city’s 2,000-year history brings the past to life. The museum presents the archaeological heritage of the city from the Paleolithic period to the early Middle Ages. The museum stands on the foundations of an urban Roman villa. And it’s here you can see the world famous Dionysius Mosaic, dating to the second century, A.D.

In front of the Town Hall, excavation is currently under way for a new museum linking the Roman period with the Middle Ages, with good views of the Praetorium and the Jewish Ritual Baths, which were constructed 1,200 years ago. In the Museum Schnütgen, you’ll discover a collection of medieval works of art in one of the oldest churches in Cologne. There’s the radiant bust by Parler, the expressive crucifix of St. George and the liturgical comb of St. Heribert, a delicate ivory carving.

The city also hosts the famous Cologne Carnival with more than one million spectators. And it’s here they serve the top-fermented Kölsch beer, along with Halver Hahn, a rye bread roll served with butter, mustard and Dutch cheese. Nightlife along the Rheinauhafen is good as well, with more pubs than any other major German city.

In Bonn, birthplace of Ludwig van Beethoven, stop by the Beethoven Haus, where the composer was born in 1770. The small museum houses the largest collection of Beethoven memorabilia, including more than 150 original documents. Audio guides are available. Beethoven was baptized in the adjacent building.

Bonn’s stylish Town Hall on the Rathausgasse was built in the Rococo style in 1738 and features a beautiful twin exterior staircase. The very long Elector’s Residence is a Baroque-style structure that sits among spacious lawns and looks quite imperial. It was the residence of the prince-electors and is now owned by the local university. Take an early morning walk through the Bonn marketplace in the city center and discover fresh fruits and fresh vegetables in the many farmers’ stands.

In Düsseldorf, called the city of fine arts and capital of North Rhine-Westphalia, you can take in “Art and Alchemy, The Mystery of Transformation” at the Museum Kunstpalast, or visit one of the other 25 museums or more than 100 galleries. The Heinrich-Heine-Institute is  devoted to the famous poet and journalist. The Hetjens Museum, the German Museum of Ceramics, opened in 1909 as a municipal museum because of Laurenz Heinrich Hetjens, an industrialist and art collector who donated a considerable collection of Rhenish stoneware, which formed the foundation of the collection. Over the years, the museum expanded through donations and selective purchases to present 8,000 years of ceramics history around the world. 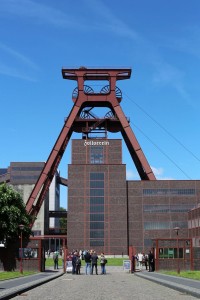 The Zollverein Mine complex in Essen has been transformed into museums, design studios, parks and more.

The MedienHafen area of Düsseldorf, formerly composed of old warehouses, has become stylish over the past few years. With its quay walls, cast-iron pollards and wrought-iron railings, it attracts the in-crowd to its restaurants and pubs.

Another lively spot is the Old Town, with as many as 260 pubs, bars and restaurants, as well as the city’s own museum, a film museum, the historic Rathaus (city hall) and several art galleries. Düsseldorf is also world-famous for its shopping amenities. The famous Königsallee is where many upscale flagship stores are located.

In Essen, the UNESCO Zollverein, once the world’s largest coal mine, has become a center for art, culture, design, education and recreation. The 65-building complex, attracting more than 1.5 million visitors annually, features a large Red Dot design museum, a Ruhr Valley museum, a monument path, a park, an ice rink and a top-notch restaurant called the Casino Zollverein. It is also an event and trade fair venue. 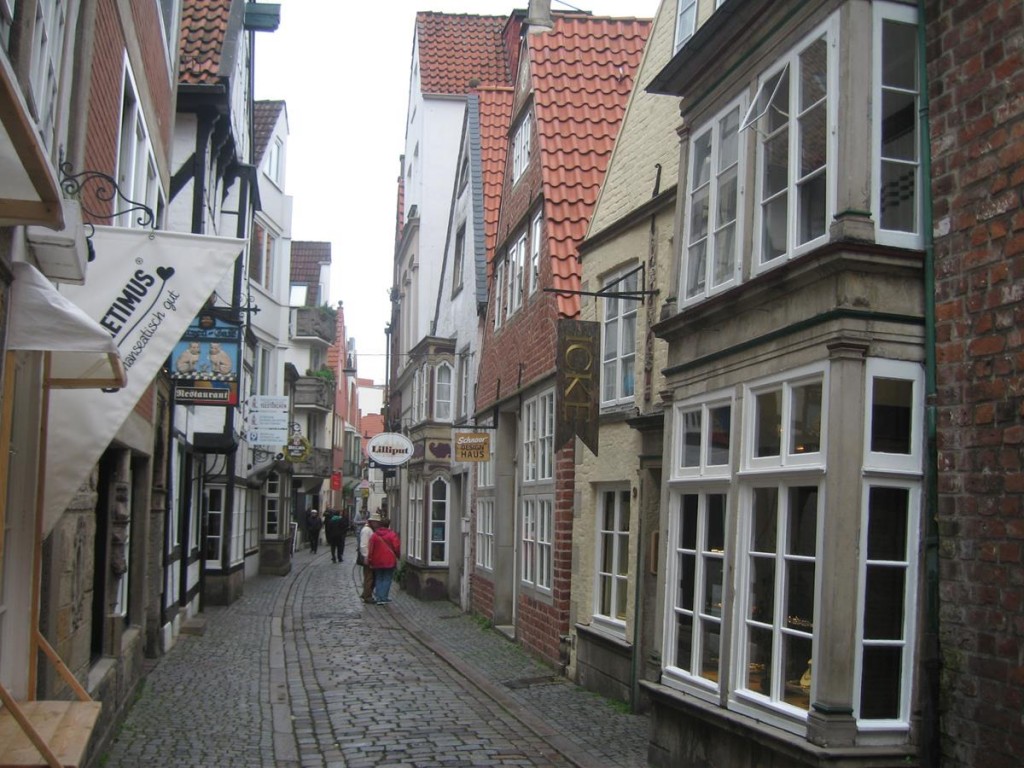 Half-timbered houses can be found in Bremen’s oldest district, the Schnoor quarter, a maze of lanes lined with little 15th and 16th century houses.

In 2014 the city of Bremen, the Hanseatic city on the Weser River, looks back at 1,200 years of history. Bremen’s attractions include the ornate 600-year-old Weser Renaissance Town Hall, itself an UNESCO World Heritage site, the Schnoor—Bremen’s oldest quarter with narrow cobblestone streets, quaint shops and half-timbered houses—and one of the city’s most recognized landmarks,  the bronze statue of the Bremen Town Musicians. The fairytale about these intrepid animals—in which they scare four robbers—is known around the world and was popularized by the Brothers Grimm. 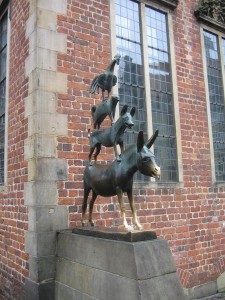 The bronze statue of the Bremen Town Musicians sits in Bremen. The fairytale about these intrepid animals was popularized by the Brothers Grimm.

Groups will enjoy a tour through the town’s well-known Ratskeller, a large underground vaulted hall that contains the country’s largest depository of German wines, totaling 650 varieties. The wine cellar and restaurant have been in existence since 1409, and groups are accommodated at both.

Other attractions include St. Peter’s Cathedral with its 324-foot-high spires, the Böttcherstrasse, a narrow lane with arts and craft shops and studios, and the eye-catching revolving tower in the wall between the Carillon House and Roselius House.

To the north in Bremerhaven, groups can discover the sea: the harbor area brims with delights such as Sail City with the highest lookout platform in the city, the National German Maritime Museum, German Emigration Center and the Zoo at the Sea. Two-hour HarborBus tours spotlight the area for groups.

For more information on any of these destinations, go to www.germany.travel.

Journalist Don Heimburger recently toured these destinations during the 2014 German Travel Mart and filed this report for Leisure Group Travel.