The Chesterfield Mayfair, one of London’s finest boutique hotels, serves as a gracious temporary home for visitors seeking to soak up British culture and the ambience of genteel Mayfair.

At some point on a trip to London, the crowds of shoppers and swarms of tourists get to be too much. The cozy confines of a boutique hotel can provide a retreat from the hubbub and a little pampering. I found my sanctuary in the exclusive Mayfair district. 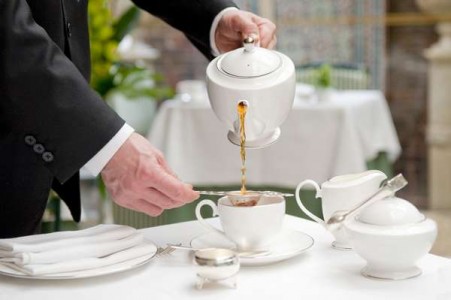 My home was the Chesterfield Mayfair at the corner of Charles and Queen streets, a distinctly British hideaway just blocks from smart shops, art and antiquarian galleries, and the greenery of Berkeley Square. Also within easy walking distance: Green Park, Hyde Park, Kensington Gardens and the American Embassy.

Formed from three 18th century brick townhouses once inhabited by members of Parliament and aristocracy, the 107-room hotel is named after the 4th Earl of Chesterfield, whose portrait adorns the lobby. Also accenting the primly elegant lobby are ornate plasterwork, potted palms, sumptuous red drapes and—on a table in the center of the room—a bouquet of red carnations, a trademark of the Red Carnation Hotel Collection, which includes five other distinguished London properties. 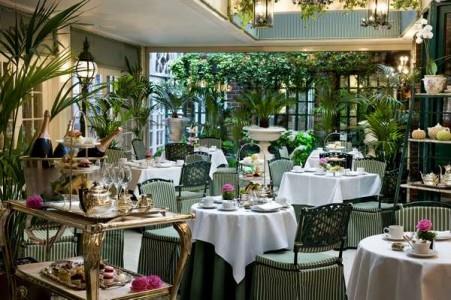 My spacious quarters, a two-room nest called the Philippe Suite, was a symphony in royal blue and white, from the carpet to the leaf-pattern wall coverings and drapes. Providing regal touches in the bedroom: a crystal chandelier studded with blue baubles and fluted, dark wood bedposts topped with gilded Corinthian capitals. Waiting for me in the sitting room were a crystal decanter of sherry and fresh strawberries, a perk for Executive Suite guests. The book shelf held volumes penned by Winston Churchill. Like the bedroom, the parlor had a crystal chandelier and flat-screen TV; prints of Old London dressed the walls. 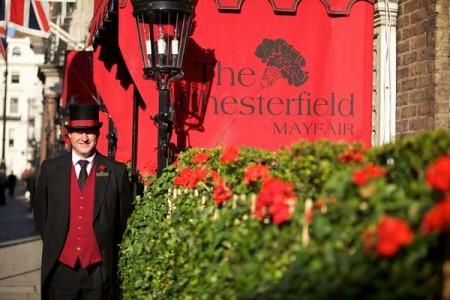 The bathroom offered all the right accoutrements, including a heated towel rack and plush white logo towels and robes. What really drew my attention was a small silver frame with a photo of a celestial fresco and this message: “Directly below this bathroom is a historic 18th century Rococo painted ceiling. It forms part of the grand entrance hall of our neighbours—Dartmouth House. To protect this work of art, we kindly ask that extra care is taken when running your bath or shower. Thank you in advance for your assistance.”

The next day I went next door and into Dartmouth House, headquarters for an educational organization called The English-Speaking Union, but didn’t see the fresco and didn’t want to ask about it or go snooping around.

Even if you don’t stay at the Chesterfield Mayfair, consider coming over for afternoon tea in the Conservatory. Treat yourself to freshly baked scones with Cornish clotted cream and homemade strawberry jam, pastries and cupcakes, and a selection of finger sandwiches, including cucumber and cream cheese on white bread, mayonnaise and watercress on basil bread, and honey roast ham with cheddar cheese and tomato chutney on onion bread. Or absorb the hotel’s club-like ambiance in the Terrace Bar or Butlers Restaurant, famed for its Dover sole and traditional roasts from the carving trolley.

Chesterfield Mayfair guests should spend some time with a good book in its wood-paneled library, furnished with leather armchairs and decorated with prints of foxes, hounds and red-jacketed huntsmen. Shelves of vintage books, including an antique set of Encyclopedia Brittanica, set the tone in this comfy den right out of an English country house.

Returning to the hotel late one night, I had foxes on my mind—for a good reason. In a residential neighborhood just blocks from the Chesterfield Mayfair, I saw a fox cross the street (Chesterfield Hill). At least I thought it was a fox, or maybe a coyote. The hotel desk clerk told me that I indeed had seen an “urban fox,” a phenomenon he seemed to take in stride. But a wild animal in genteel Mayfair, right in the heart of London’s West End?

My nighttime explorations of Mayfair yielded some other discoveries. At the American Embassy, overlooking leafy Grosvenor Square, I walked up to the floodlit statue of Ronald Reagan and read the plaque describing how his vision helped to end the Cold War. On the other side of the embassy grounds I came upon a statue of Dwight Eisenhower in military dress. (Ike’s wartime headquarters were at No. 20 Grovesnor Square.)

Before the park custodian locked the gates of Grosvenor Square’s for the evening, I had time to pause at the statue of Franklin D. Roosevelt and, right across from the Italian Embassy, the 9/11 Memorial Garden honoring victims of the U.S. terrorist attacks in 2001. 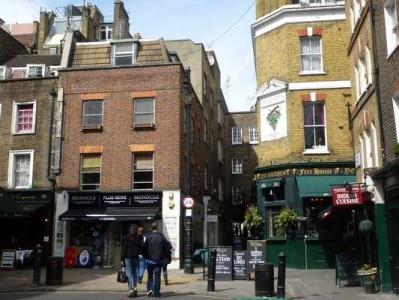 Those poking around Mayfair also should check out Shepherd Market, a village-like hodgepodge of shops, restaurants and atmospheric Victorian pubs (like Ye Grapes, circa 1882). Centered around a small square fed by little alleyways, it’s a tucked-away gem.

Down the street and around the corner from my hotel, I enjoyed reading the blue-and-white plaques affixed to the buildings where famous people had hung their hats. I discovered that the Duke of Clarendon, later to become King William IV (1830-37), lived at 22 Charles Street in 1826.  Other signs told me that these also were the stomping grounds of novelist William Somerset Maugham and British Prime Minister Anthony Eden. Because Mayfair is primarily residential, there are no must-see sights, throngs of tourists and traffic-clogged streets, and that is part of its appeal for those of us who like to see how people—the upper crust in this case—actually live. 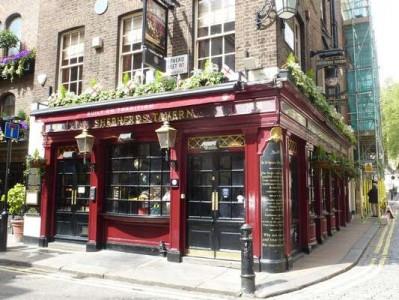 A favorite pastime for daydreamers is peering into the windows of real estate offices and gasping at the astronomical prices of apartments in Mayfair—I saw a Grosvenor Square listing priced at 32 million pounds sterling (over $50 million)!

Walking back to my hotel, past high-end jewelry, clothing and home furnishings stores, I just felt privileged to have had the chance to reside in Mayfair for the weekend.

Besides the Chesterfield Mayfair, Red Carnation hotels in London include The Montague on the Gardens (just steps from the British Museum), the Milestone Hotel (overlooking Kensington Palace), Egerton House Hotel, The Rubens at the Palace and 41.