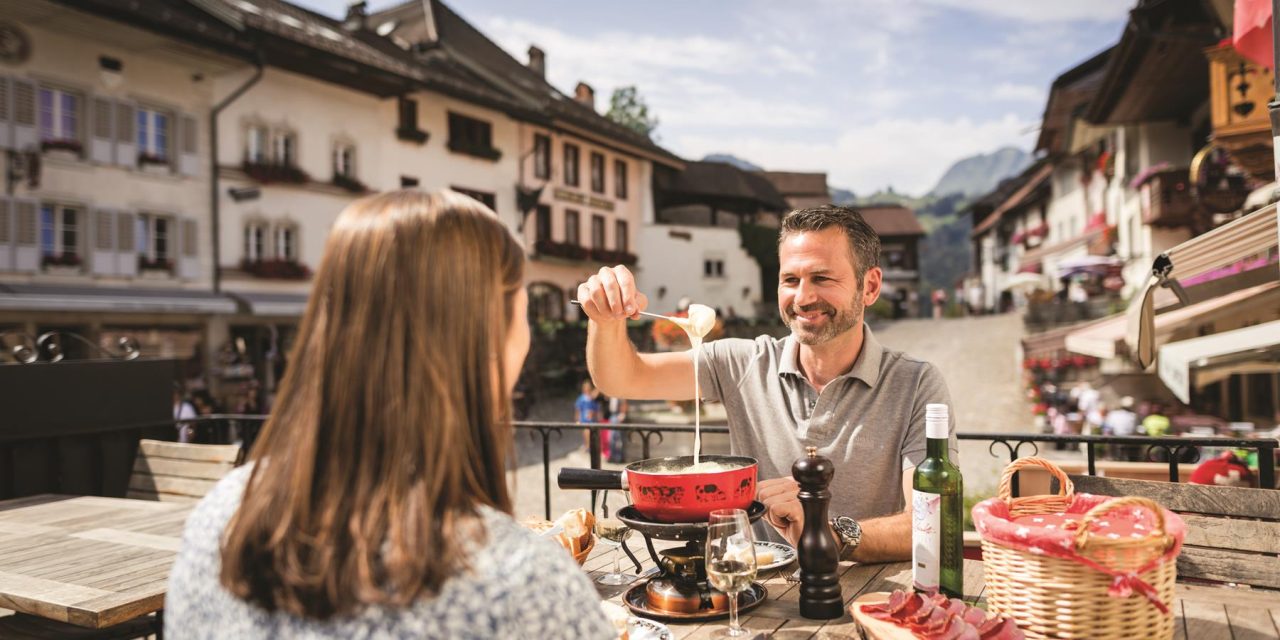 Switzerland, the land of cheese and chocolate, offers groups a cornucopia of culinary experiences—with peeks into how favorite foods are made

Those plump cows grazing in idyllic Alpine pastures create more than just the postcard-perfect scenes that give Switzerland its pristine image. Their milk, delivered fresh to food-processing plants, is an important ingredient in many of the country’s signature edibles—from candy to cookies to cheese.

Groups traveling in Switzerland have a wide choice of factories and production areas where they can see how foods, including some world-renowned brands that have been around for generations, are made. These manufacturing facilities are prime tourist attractions.

Besides behind-the-scenes glimpses of what goes into making cheese, chocolate and other favorite comestibles, visitors come away with insights into the company’s culture through museum exhibits, demonstrations and handson activities. And let’s not forget the taste samples, which can be quite generous. Almost everyone loves chocolate, and Swiss chocolate is second to none. Milk or dark, studded with nuts, filled with liqueur—chocolate is the ultimate happy food, whether in the form of a praline, truffle or bar. The Maya and Aztecs believed the cocoa bean to be the food of the gods; beans were so precious they were used as currency.

Heavenly aromas of chocolate greet visitors to Maison Cailler, the interactive museum of Cailler, a Nestle firm based in the village of Broc in the La Gruyère region. Founded in 1819 by Francois-Louis Cailler, Switzerland’s oldest chocolate brand has been made in the historic Broc factory since 1898. Maison Cailler’s exhibition, a self-guided experience employing audio headsets, reveals the secrets behind chocolate making, provides a live look at a mini production line and includes lots of sampling. Cailler is the only Swiss chocolate manufacturer using condensed milk instead of powdered milk, a formula that gives its product a rich milky flavor and smooth, melt-in-the-mouth texture. Milk comes from nearby farms in the Fribourg Alps, where cows spend spring through autumn in mountain meadows and winters in fields around Broc. The milk is so fresh that chocolate connoisseurs can tell the difference between summer and winter milk. 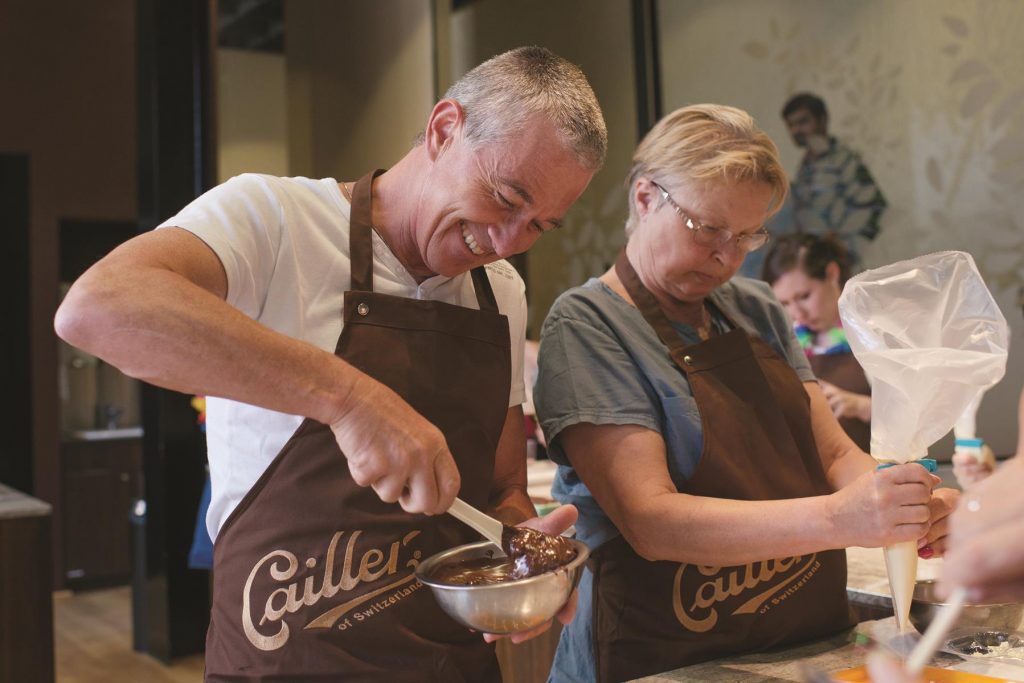 At Aeschbach Chocolatier in Root-Lucerne, a 10-minute train trip from Lucerne, groups on guided factory tours get to watch the artisans up-close. Afterwards, guests can explore the ChocoWelt (ChocoWorld) exhibition, with tastings included. The ChocoStudio offers novice confectioners a chance to decorate their own pralines. The third-generation family business also has a ChocoStore and ChocoCafe. At Lucerne’s Swiss Museum of Transport, a 20-minute ride called the Swiss Chocolate Adventure features a multimedia show explaining the origins and production of chocolate. Lindt chocolates are served after the ride.

In northwestern Switzerland, Camille Bloch, a third-generation enterprise famed for its Ragusa and Torino brands, welcomes groups to the visitor center across the road from its factory in Courtelary. The self-guided Discovery World experience includes films, demonstrations and samples. Groups can book a chocolate-making workshop with a master chocolatier, and chocolate treats can be enjoyed at the Bistrot. In the eastern Switzerland town of Flawil, about 20 minutes west of St. Gallen, the Chocolarium at Maestrani’s chocolate factory offers tours, tasting and hands-on kitchen fun. (A visit to Maestrani’s could be combined with a tour of nearby Appenzeller Show Dairy, known for its spicy, herb-flavored cheeses.)

Lindt Home of Chocolate, a new attraction in Kilchberg, opened in September of 2020. Located at the Lindt & Sprüngli factory, it features museum exhibits, an audio-guided multimedia experience following the process from bean to bar, a pralines tasting room, and a show production facility that demonstrates Lindt’s latest manufacturing technologies. In the world’s largest Lindt chocolate shop, guests can watch as a master confectioner puts finishing touches on freshly produced pralines, bars and other delicacies. They can indulge in Lindt drinking chocolate at the Lindt Chocolate Cafe while looking out over the striking chocolate fountain that soars nearly 30 feet tall. Chocolate-making courses let guests make their own creations. Kilchberg is about 20 minutes south of Zurich. 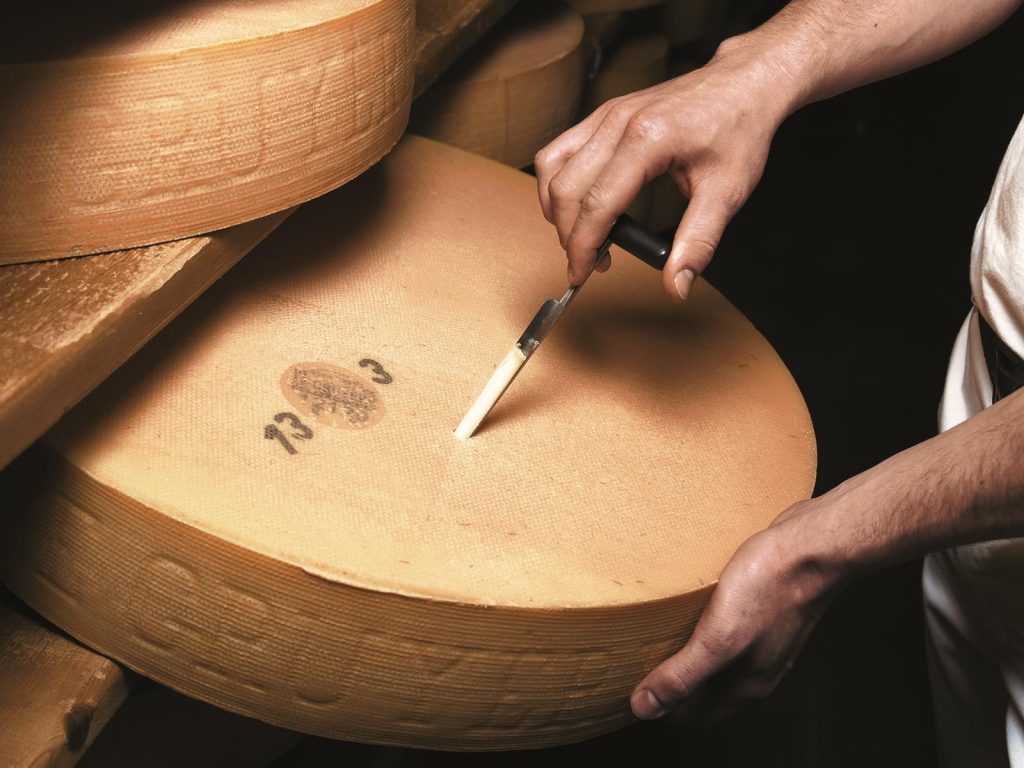 World-famous Le Gruyère AOP, ideal for sauces and fondue, takes its name from the French-speaking region from which it comes. La Maison du Gruyère, a modern show dairy at the foot of the castle-topped town of Gruyères, tells the story of this rich, creamy, strongly flavored cheese, which has been produced in the Fribourg Alps since at least the 12th century. AOP (appellation d’origine Protégée, or protected designation of origin) means the product complies with stringent specifications for processing and is awarded to high-quality Swiss specialties with a strong link to their region of origin. Each wheel (up to 48 made daily) is marked with the notation “Gruyère AOP” to assure its authenticity.

On the self-guided tour through the interactive exhibition at La Maison du Gruyère, headphone-wearing visitors learn—from videos and commentary by Cerise the friendly cow—all the ins and outs of cheese production and through gallery windows see the cheesemakers at work. Interesting facts: 1) The raw milk (unpasteurized milk) from black-and-white Fribourg cows is delivered by 36 farmers twice a day to the dairy (actually located in the village of Pringy); and 2) After the cheese is pressed into a mould, the wheel is plunged into a salt bath and aged in a cellar containing 7,000 other wheels. A tour highlight is tasting Gruyère at three different stages of ripening—six, eight and 10 months.

The Le Gruyère region’s Cheese Dairy Trail (Le Sentier des Fromageries) passes by cow-dotted pastures and shingle-roofed Alpine chalets where cheese is made the old-fashioned way in wood-fired cauldrons. The hike from the modern show dairy in Pringy to Moleson takes about two hours and can include a fondue meal at an 18th century chalet in Moleson. Groups also can enjoy fondue and other cheese dishes at traditional eateries in Gruyères and at La Maison’s restaurant. For a light-as-air dessert, try a regional treat—crisp, doughy meringue topped with double cream.

In the Engelberg countryside of central Switzerland, the Alpine Cheese Trail links eight mountain dairies on a hiking/biking route that affords chances to chat with farmers, take a tour, buy cheese and perhaps have a meal featuring fondue or raclette (melted cheese scrapings served with small potatoes and pickles, a Swiss specialty). Doing the whole trail takes two or three days, but it can be done in sections, and cable car rides shorten the trip.

In the town of Engelberg, groups can arrange a tour or an artisan cheesemaking demonstration or class at Kloster Engelberg, the only Swiss monastery with a show dairy. They also can dine on fondue or raclette in the restaurant and shop for cheeses, including the famous Engelberger Klosterglocke, a mild cheese pressed into the shape of a monastery bell.

To Americans and many others around the world, the term Swiss cheese means the kind full of holes. Officially known as Emmentaler, the “King of Cheese” comes from the Emmental Valley in the heart of Alps. On a tour of Emmentaler Show Dairy in Affoltern im Emmental, groups can learn how the holes (or “eyes”) form during ripening.

The Emmental Valley also is home to Switzerland’s most popular cookie brand—Kambly. The iconic Swiss family company was founded in 1910 and is run today by the fourth generation of the Kambly family. Kambly makes dozens of cookie varieties (many with chocolate) at its plant in Trubschachen, but the simple Bretzeli is the most famous. A thin disc made with fresh butter and eggs from Emmental farms and flour from the village mill, the Bretzeli is produced according to the same recipe that founder Oscar Kambly I borrowed from his grandmother. 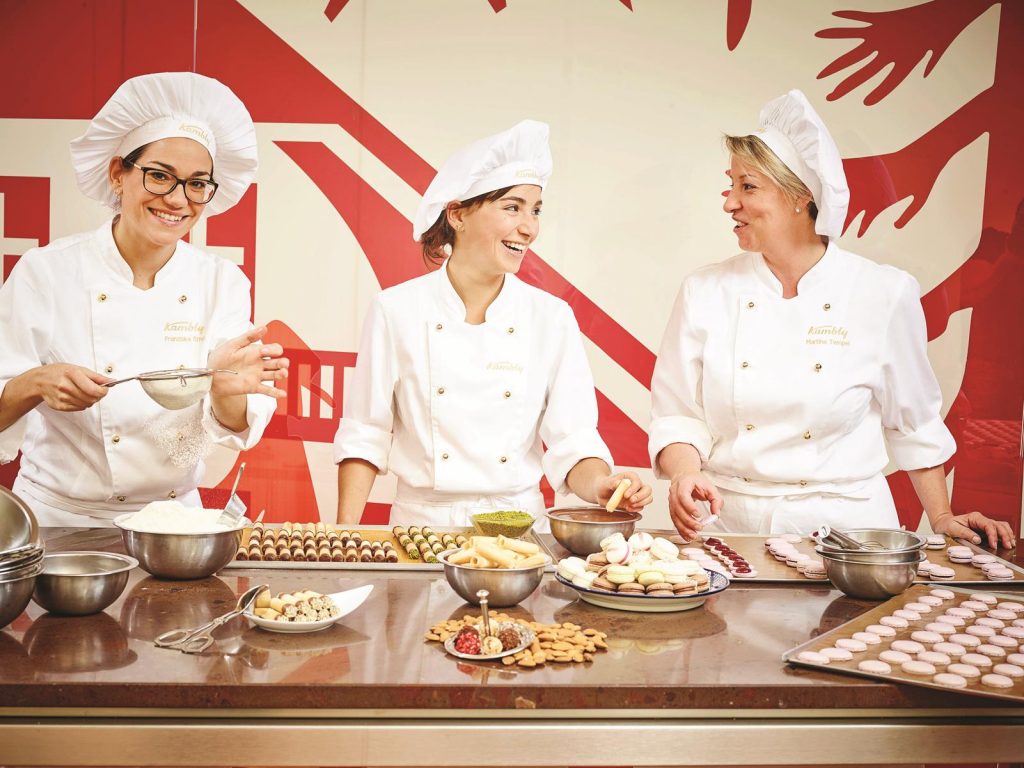 The Kambly Experience visitor center offers a multimedia presentation and a show confectionery where visitors can watch the master confectioners at work. The factory shop invites guests to sample as many of the 100 different cookie and cracker varieties as they want. Groups can book a baking class conducted by a master confectioner. The Kambly Train offers easy and direct access from Bern and Lucerne to Trubschachen. The “Kambly Roundtrip” is a picturesque five-hour trip by train and boat that is covered by the Swiss Travel Pass.

The Emmental Valley tourism office markets a one-night package ideal for faith-based groups. Titled “Living History: On the Path of the Emmental Anabaptists,” the tour combines the Kambly Experience and Emmentaler Show Dairy with visits to a farmhouse hideout used centuries ago by Anabaptists and a castle where members of the persecuted religious sect were imprisoned. Groups stay overnight at Sumiswald Castle, built in 1225 and now a modern B&B.

The GoldenPass-MOB line’s Chocolate Train, popular with groups, provides a day-long foodie adventure (May-October) that indulges passions for cheese as well as chocolate. From Montreux tour participants travel in first-class Belle Epoque carriages to Montbovon, enjoying coffee and chocolate bread en route. Then they are transferred by bus to La Maison du Gruyère, with time to explore the streets of medieval Gruyères, and La Maison Cailler, returning to Montreux by road in late afternoon.

The Cheese Train (Train du Fromage), another GoldenPass-MOB special from Montreux (or Zweisimmen), takes passengers to the Pays d’Enhaut area in the Lake Geneva region for fondue and a demonstration of traditional cheese making over a wood fire at a rustic restaurant in Château d’Oex. Cheeses and regional wine are served on board, and the program includes a folklore or hot air balloon museum. The Cheese Train runs every Friday-Sunday between January and April.

Beer aficionados can gain insight into Switzerland’s brewing industry in locations throughout the country, which claims more breweries per capita than any other. Every fourth glass of beer drunk in Switzerland is a Feldschlösschen brand of Feldschlösschen Brewery in Rheinfelden, a short drive east of Basel. Two-hour tours with beer tasting await groups at the nation’s largest brewery, which also brews other brands. The company boasts one of the world’s most beautiful brewhouses, a castellated 19th-century building containing 12 original copper tanks. Separate tours spotlight the brewery’s vintage car collection and stables housing draft horses that pull beer wagons in parades and appear at other special events (reminiscent of the Budweiser Clydesdales in America). 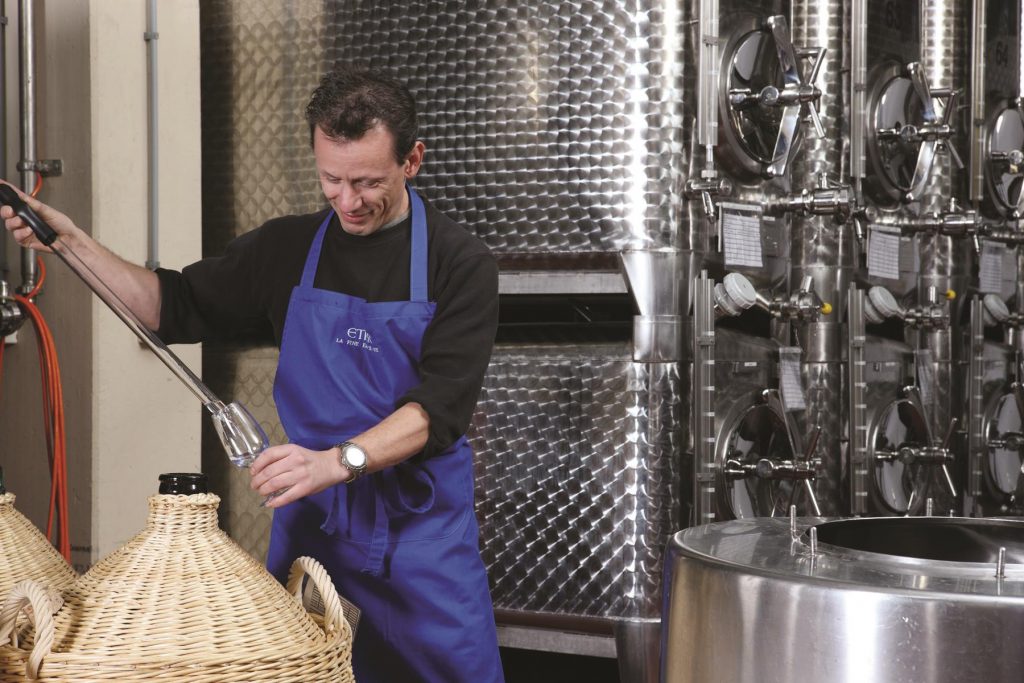 For something with a higher alcoholic content, kirsch (or Kirschwasser) from the cherry-growing region of central Switzerland is worth investigating. The organization Kirschstrasse (translated “cherry schnapps street”) conducts tours, with tastings of the clear brandy, at the Arnold Dettling Kirschwasser Distillery in Brunnen. Another option: Make your own cherry schnapps at a farm in Arth with a distillery dating back to the 17th century. In Zug, tours of Etter Sons Distillery also reveal what goes into its kirsch and other fruit brandies.

Kirsch makes its way into some Swiss chocolates, and it flavors Zug cherry cake (Zuger Kirschtorte), a specialty of Zug for nearly a century and a favorite delicacy throughout Switzerland. On a program organized by Zug’s tourism office, foodies watch the bakers at Confiserie Speck craft the “Queen of Tarts,” a torte with layers of hazelnut-almond meringue, sponge cake and butter cream—and a generous dousing of Zug kirsch. After the demonstration, they enjoy a piece with coffee or tea in Zug’s oldest tea room.

How appropriate that we conclude our discussion of Switzerland’s culinary landscape on a high note—with dessert.