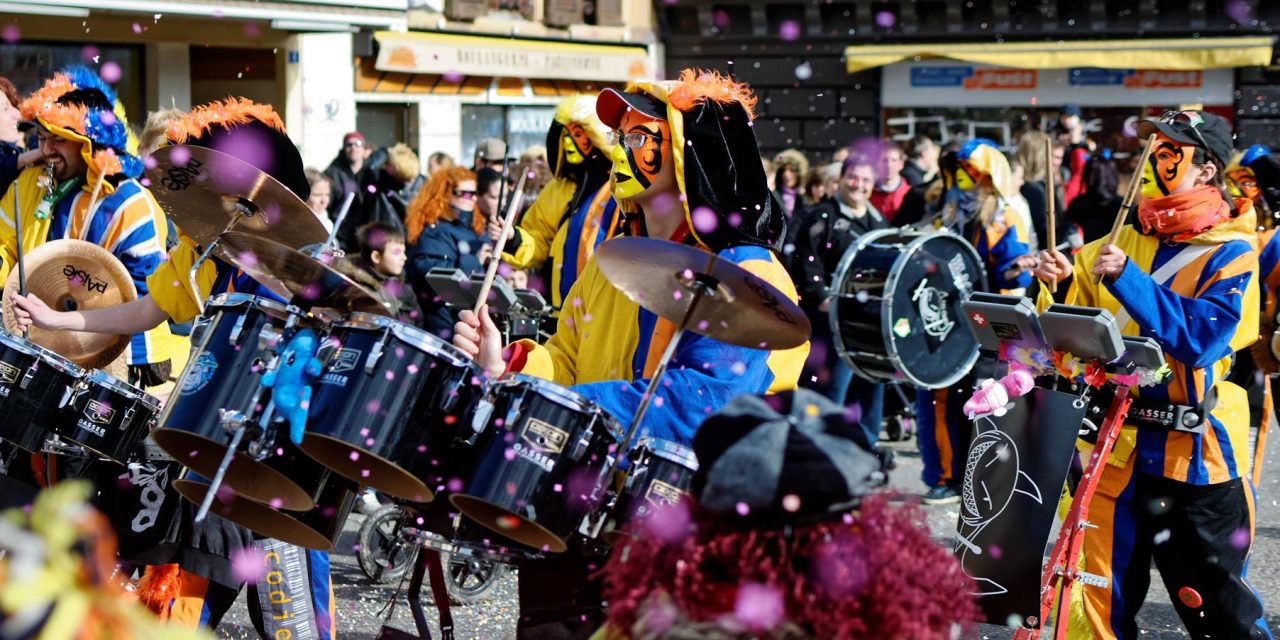 According to the World Happiness Report, a landmark survey of the state of global happiness, Switzerland consistently ranks at or near the top of this planet’s most joyful countries. Further evidence of Switzerland’s bliss can be found in its numerous festivals, where its countrymen and women (and a myriad of tourists) embrace its many offerings. From exquisite chocolate to melodious music to spectacular balloons ascending against a clear blue sky, Swiss festivals have something for everyone.

Here are some Swiss festivals to consider the next time you pay a visit.

A one-of-a-kind event takes place in the Alpine regions each summer as farmers lead their cattle to higher elevations where they produce a delicious cheese made of raw milk. Around 270,000 cows are marched from their valley farms to mountain meadows at the start of every summer, while the descent takes place in late August and the beginning of September. On average, the cows climb about 1,900 feet (580 m) with some climbing almost four times that distance. The reason for this is from June to early September, Alpine pastures serve up a smorgasbord of hundreds of different grasses and herbs for the cows to graze on. That’s compared with only a few dozen types lower down in the valley. Researchers say Alp cheese is much richer in omega-3 fatty acids, which is good for you. 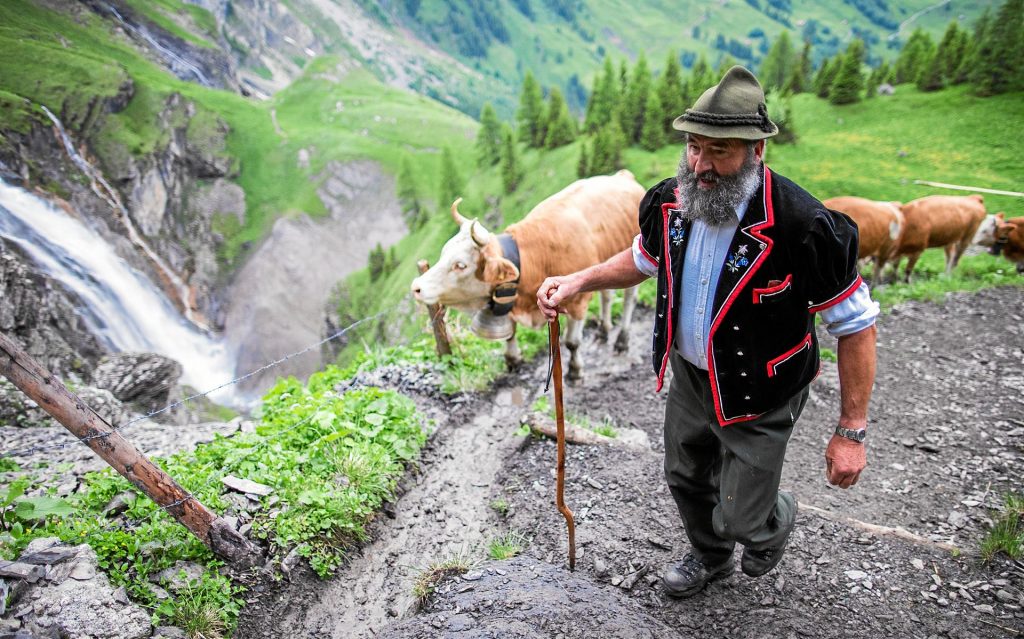 One such example of this ascent is the cattle procession from the mountain village of Adelboden to Engstligenalp, a plateau of the western Alps, which draws a crowd that watches approximately 500 animals climbing a steep slope in orderly fashion. Some who attend the event wait for the cows on Engstligenalp while enjoying a sunrise, while others prefer to eat lunch on the plateau. 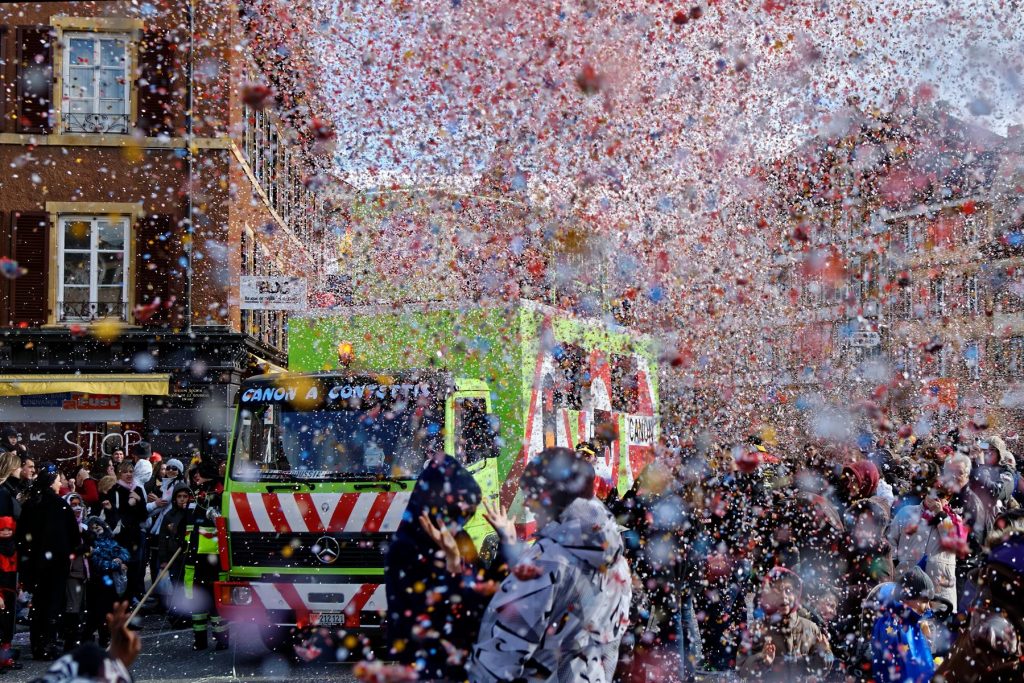 Switzerland’s largest carnival, Basler Fasnacht takes place between late February and early March. This three-day event begins the Monday after Ash Wednesday at 4 a.m., as masked pipers and drummers march through the city’s Old Town. Approximately 18,000 carnival participants dress up in costumes and march in parades accompanied by orchestras playing piccolos, drums and other musical instruments. Many restaurants and bars remain open during the fest, both day and night.

The highest-altitude jazz festival in Europe (St. Moritz boasts an elevation of almost 6,000 feet (1,800 m) above sea level) is considered one of the finest jazz events in the world. Each year, the Festival da Jazz presents world-class musicians and memorable performances in the unique atmosphere of the private and world-famous Dracula Club, which opens its doors to the public for the event. The Festival da Jazz melds jazz sights and sounds with swing, bossa nova, mainstream, bebop, blues and gospel concerts. The intimate audience size of 150 gives guests the chance to enjoy the music in close proximity to the musicians.

This annual free event takes place in late March or early April and has become a must-attend for chocolate lovers. Nearly 40 Swiss chocolate artisans gather in the small town of Versoix, near Geneva, where they provide tastings, unveil chocolate sculpture exhibitions and feature food stands where guests can buy some of the finest chocolates in the world. Special chocolate workshops for children help make this Swiss festival popular with families.

Geneva’s biggest celebrated event, this festival takes place each December commemorating the city’s victory against the Duke of Savoy’s troops in 1602. Locals wear costumes and parade through Geneva’s Old Town on foot or on horseback, armed with torch lights and drums. The festival features period costumes, country markets, folk music and traditional chocolate marmite cauldrons as well as a five-mile run that kicks off the celebrations. 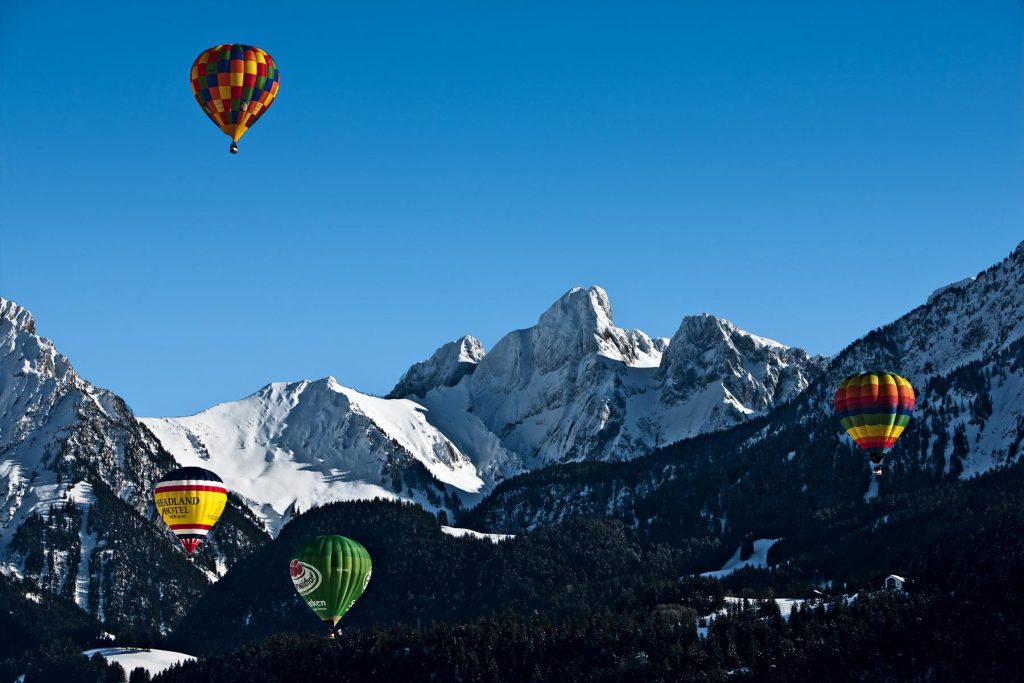 For nine days at the end of January, the village of Château-d’Oex hosts around 100 hot air balloons of all shapes, sizes and colors from more than 20 different countries. This festival got its start in 1979, when 12 balloons from five countries gathered to promote the village. It has grown significantly since then, as pilots from around the globe float their balloons over the Alps, creating a spectacular view in the sky. Along with the balloons, the festival hosts numerous events and contests, including a children’s-themed day and its most popular event, the night glow, when the balloons illuminate against the evening sky thanks to the flames from their burners.

Famous orchestras, legendary conductors, and virtuoso soloists join together on the idyllic location of Lake Lucerne to celebrate the joy of music. In the concert hall, which is renowned for its phenomenal acoustics and its exquisite architecture, they encounter visitors from Switzerland, Europe and all around the world. The Summer Festival takes place annually from mid-August to mid-September. It opens every year with a performance by the Lucerne Festival Orchestra.

The exact program will be announced in late autumn 2019. As part of this strategy, the Easter and Piano Festivals will be discontinued as of 2020. The 2019 Piano Festival will take place from November 16-24 as planned. 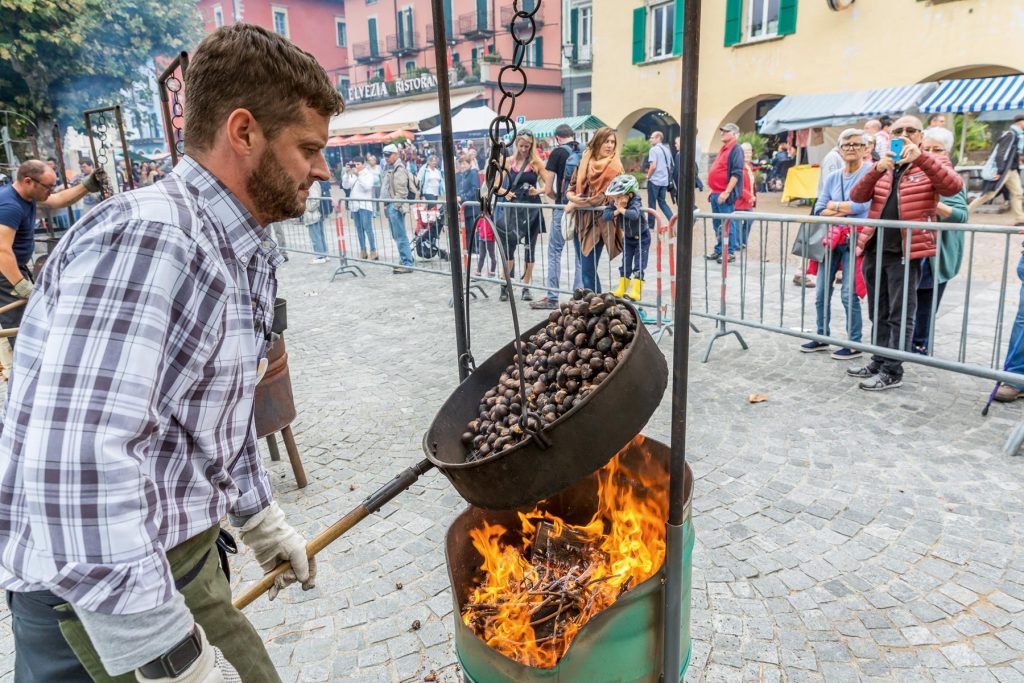 The Swiss festival of Chestnuts is celebrated throughout Ticino in October. The one in Ascona is one of the most popular events. At this fest, visitors can enjoy the chestnut roasted over fire along with various chestnut-based delicacies such as jams, honeys, cakes, ice cream and a slew of the region’s traditional food and wine products. Take a stroll, accompanied by music, past the market booths and discover a variety of culinary delights, arts and crafts.

Founded in 1967, the Montreux Jass Festival, which takes place over two weeks at the beginning of July, is Europe’s biggest jazz festival. Originally a pure jazz fest, it opened up in the 1970s and today showcases artists of virtually every music style. More than 1,300 artists have performed at the fest, and a slew of live albums were recorded there, including recordings by Alice Cooper, Carlos Santana, Deep Purple, Jethro Tull, Run-D.M.C. and Van Morrison.

This traditional holiday takes place every April in Zurich and features a colorful parade attended by around 3,500 members of the guilds, 350 horsemen and 30 music corps in historical costumes and uniforms. The climax of the event occurs with the burning of the “Böögg”, a figure of a snowman prepared with explosives. Popular tradition says the faster the head of the snowman explodes the better summer will be. In the evening, the biggest barbecue in Switzerland takes place as sausages are grilled in the “Böögg’s” fire. 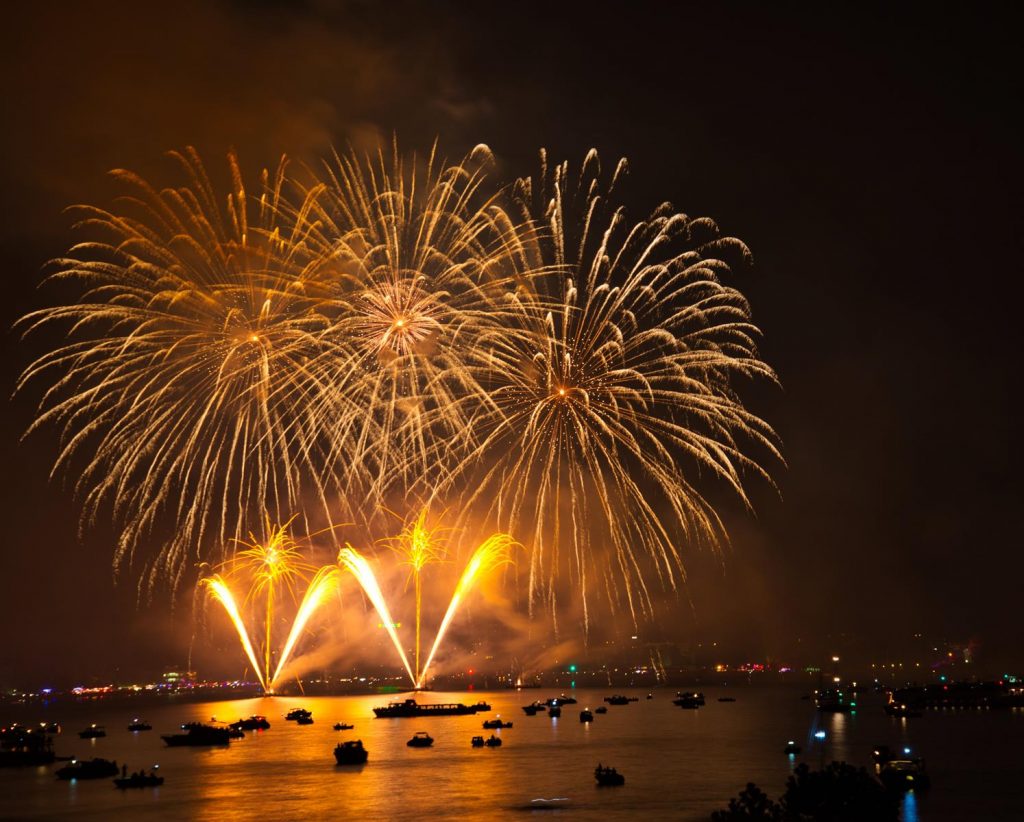 Fireworks are a common scene on Swiss National Day.

Since 1891, August 1 has been celebrated as Swiss National Day. This date refers to an alliance formed in 1291 by the three cantons of Uri, Schwyz and Unterwalden, the center around which Switzerland was built. It is also the day Switzerland’s residents join together to celebrate in towns and cities across the country. Each Swiss city offers a day of federal unity by organizing fireworks displays, concerts or presentations, and thousands attend festivities in the largest cities: Zurich, Basel, Geneva, Bern and Lucerne. The main celebrations, though, take place at the Rhine Falls near Schaffhausen and at Rütli Meadow above Lake Lucerne. Referred to as “fire on the rocks,” the show at the Rhine Falls is one of the top Swiss National Day events as the falls are illuminated with fireworks and light effects. A representative celebration is also staged at Rütli Meadow. This is where Switzerland’s historic oath marking the foundation of the Swiss Confederacy took place.

The largest wine fest in the German-speaking part of Switzerland, Winzerfest has been celebrated by the Zurich region for 68 years and takes place in October. Spiezer Laset-Sunntig is the only wine festival in the Bernese Oberland, the higher part of the canton of Bern, and celebrates its 50th anniversary in September 2019. The Russin Harvests Festival in the Geneva region has been running for 57 years and unfolds in September in the bucolic setting of Russin,  in the heart of the Mandement vineyards. World Snow Festival, Grindelwald

A celebration of icy art in Grindelwald, this January festival has grown into one of Switzerland’s most popular winter events. The six-day fest began in 1983 and today attracts international artists who design figures and sculptures out of blocks of snow. The streets of Grindelwald transform into a charming museum with ice sculptures adorning each corner. A jury of experts judges the giant snow sculptures and the public is welcome to give their impressions of the art.