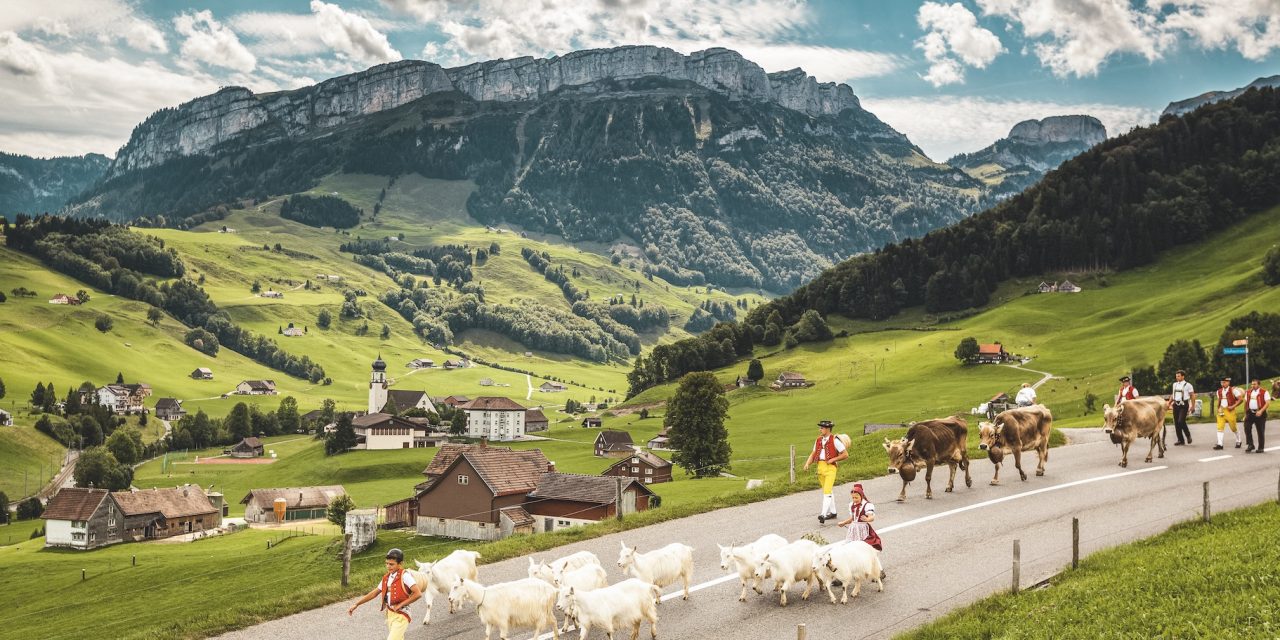 Not content to just mark off standard tourist sights from a checklist, curious travelers these days are looking for authentic experiences. With a desire to meet the people and get a feel for everyday life, they seek ways to get beneath the surface of a culture and see what makes it unique.

Of Switzerland’s 26 cantons, 19 are predominately German-speaking, while French is the language in four cantons in Western Switzerland—Geneva, Neuchâtel, Jura and Vaud. Both French and German are spoken in three bilingual cantons: Bern, Fribourg and Valais. In the south, Italian speakers, representing 8 percent of the Swiss population, inhabit Ticino Canton and four valleys in Graubünden (a trilingual canton where German and an obscure Latin-derived dialect, Romansch, also are heard).

A satisfying tour itinerary will spotlight food specialties, musical performances and other only-in-Switzerland experiences. Following are some possible inclusions that will make your clients feel they have discovered the essence of “Swissness.”

Culinary travel continues to ride a wave as more and more globetrotters are making mealtime a highlight of their day on the road. A revived interest in regional cuisine fuels the fervor.

We automatically associate certain foods with Switzerland—cheese, chocolate and fondue, for example, are found in all parts of the country. So are Rösti, a cake of thinly shredded potatoes fried in butter or fat until crisp. But it’s fun to try foods that are special to a particular region, and each region of Switzerland has its own favorites. Swiss cuisine is heavily influenced by bordering countries.

A signature dish in Vaud is Papet Vaudois, a hotpot recipe featuring plump smoked pork sausages (saucissons Vaudois) on a bed of stewed potatoes and leeks in an oniontinged sauce of cream and white wine. Vaud, in the Lake Geneva region, also is known for croute au fromage. To make this Swiss version of grilled cheese, slices of bread are dipped in white wine, covered with thick layers of cheese and put in the oven for melting until the cheese is a golden yellow.

Cholera, a hearty vegetable tart, comes from Valais. The comfort food is said to trace its creation to an 1830s cholera epidemic when people used whatever foods were available. Every recipe is different, but ingredients may include apples, pears, cheese, potatoes, onions, leeks and bacon. Bakeries sell cholera cold by the slice, while restaurants typically serve it hot as an appetizer. 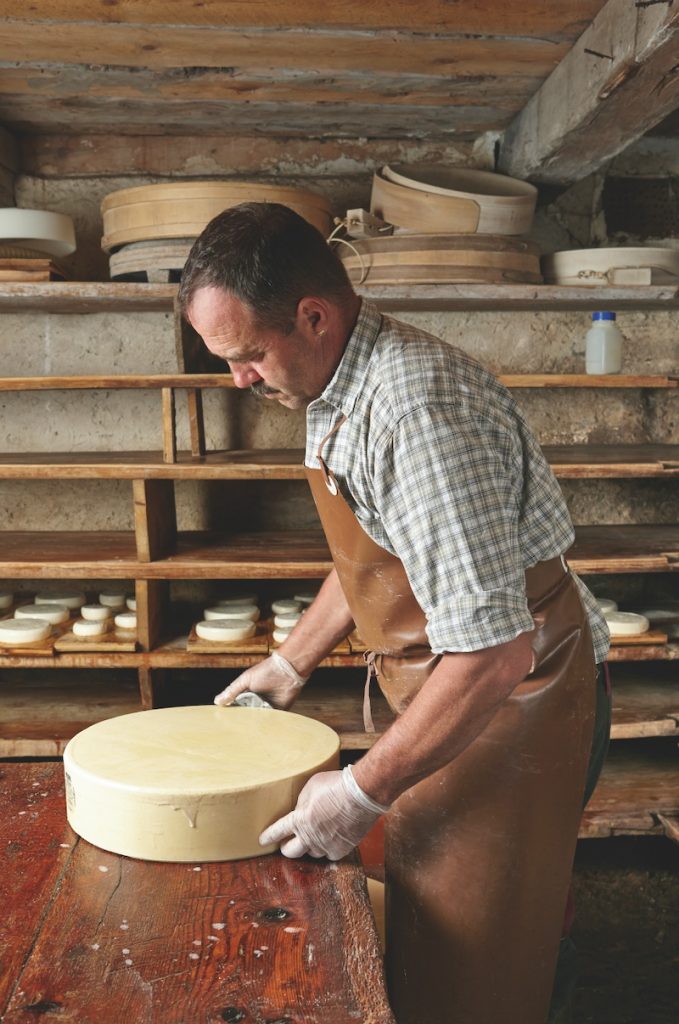 Traditional cheese dairy in the Alps above Lenk in the Bernese Oberland. Switzerland Tourism

Another food that hails from Valais is popular in every region. Raclette is a semihard cheese traditionally grilled slowly over a fire, with layer-by-gooey-layer scraped off to eat with crusty dark bread or with boiled potatoes, pickles and onions.

Visitors to the Italian-speaking cities and towns of Ticino are likely to have polenta at least once. The creamy yellow cornmeal dish (sometimes mixed with cheese in this area) is served as a main course or as an accompaniment (for example, with rabbit cut into strips, braised beef in red wine (brasato) or as a bed for beef stew). Gnocchi, fettuccine and other homemade pastas, along with risotto, pizza, fresh-baked focaccia bread, salami, mortadella and the region’s famous Luganighe sausages, are among the treats that await at a grotto, the name for rustic, cave-like taverns that often feature summer dining under the shade of cool chestnut trees. You can wash it all down with Ticinese merlot, a full-bodied red traditionally drunk from ceramic bowls. Desserts in Ticino range from gelati and sorbets to amaretti, small almond-flavored cookies similar to France’s macarons, and vermicelles, spaghetti-like strands of sweet chestnut paste atop pastries or alone with whipped cream. Chestnut goodies of all kinds are available at Ticino’s autumn chestnut fetes.

The dynamic German-speaking city of Zurich is the place to indulge in Zürcher Geschnetzelte, a dish of sliced veal and mushrooms in a gravy of cream, white wine, onions and butter. Available in fivestar restaurants and cozy taverns alike, it is typically served with Rösti, rice or noodles. The OLMA bratwurst, a white veal sausage, comes from St. Gallen in Eastern Switzerland and gets its name from the Swiss Agricultural and Food Fair called OLMA. Considered the nation’s best sausage for grilling or frying, it is commonly served with a crispy roll at sausage stalls and is best eaten without mustard in order to let the meat’s full aroma come through.

Carnivores in Bern and vicinity clamor for the Berner Platte, a large platter that contains a medley of meat and sausages such as beef, smoked beef and pork tongue, smoked pork belly, smoked pork chops, pork shoulder, pork knuckle and tongue sausage, all cooked with juniperspiced sauerkraut, pickled turnips, beans and boiled potatoes. The onion tart (Zibelecheche) is another Bern specialty. Basel, wedged between France and Germany, takes pride in its Basler flour soup, which is made with flour, butter, onion and beef stock and topped with grated Gruyère cheese.

German areas turn out some delicious sweets, including Basler Leckerli, a gingerbread cookie special to Basel. Hüppen are long, crisp wafer cookies sometimes filled with chocolate. In Appenzellerland, the Appenzeller Biberli is a gingerbread pressed into a wooden mould to make it look like a picture. The town of Zug gives us the cherry-flavored Zuger Kirschtorte, a round cake with layers of hazelnut-almond meringue and kirsch-infused butter cream. In Graubünden, the must-have is Engadiner Nusstorte (nut tart), a buttery pastry made with chopped walnuts and caramel. 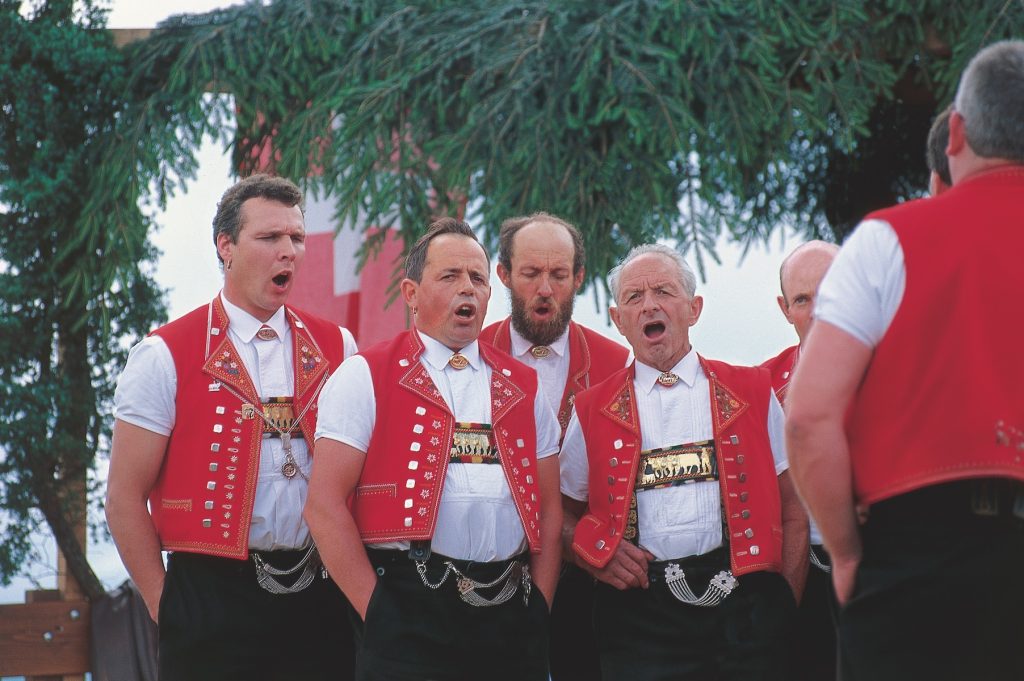 Swiss folk music, developed over generations with the passing down of skills and compositions, is mainly dance music (whether there is dancing taking place or not). The most commonly heard instruments are the Schwyzerörgeli (small Swiss accordion), violin, bass violin and clarinet, and, in the Appenzell region, the dulcimer. In southern (Italian-speaking) Switzerland, use of the mandolin reflects traditional ties to Italian culture. Virtually every Swiss village has a band or choir, often a yodel choir. 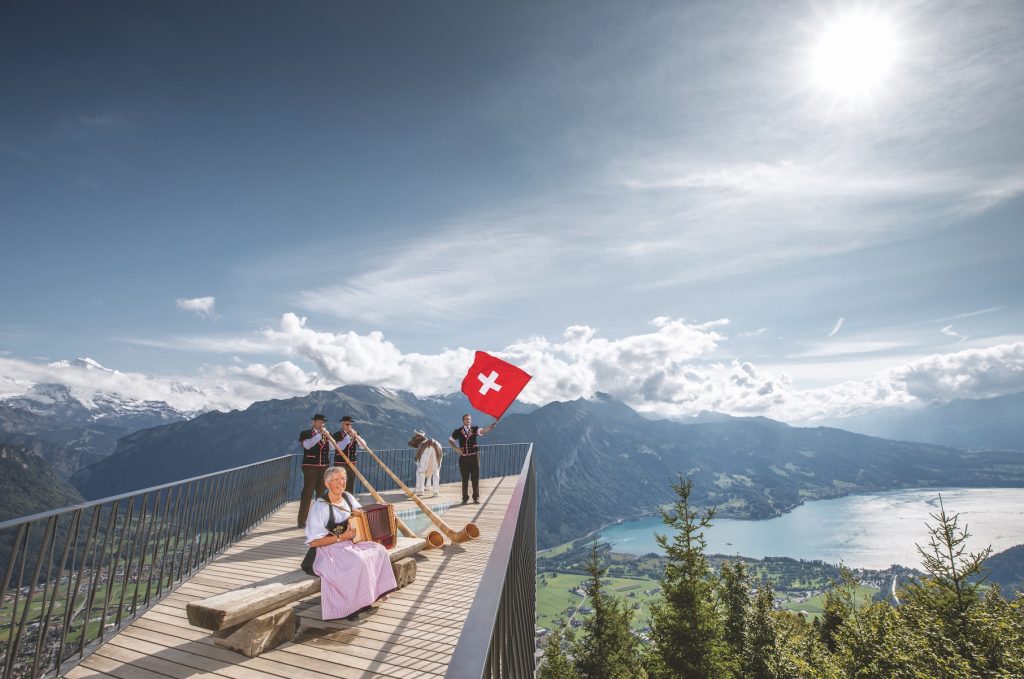 Yodeling originated in the Alps as a way of calling from one hill to another; it developed into singing in the 19th century. The vocal technique involves repeated and rapid changes in pitch from normal voice to falsetto and back again, using a few meaningless syllables. Usually accompanied by a Schwyzerörgeli, classic yodel songs consist of verses (usually about mountains, nature or home) sung in normal voice and a refrain sung in yodeling mode. Most Swiss yodeling songs are in German, but some are in French. Yodel choirs perform in front of jurors at regional and cantonal yodeling festivals and every three years at the national yodeling festival.

The alphorn, so typically Swiss, also makes its way into parades and other events, throughout the country. Measuring about nine feet long, the wooden wind instrument with a cup-shaped mouthpiece and bell-shaped opening at the end has no holes, valves or buttons—all notes are made with the blower’s lips. The sound combines the richness of a brass wind instrument with the softness of a woodwind. About 1,800 alphorn blowers in Switzerland and around the world belong to the Swiss Yodeling Association.

Originally used by shepherds to call in their animals for milking and to communicate with people on the mountain or in the valley below, the alphorn was on the verge of distinction until the romanticism of the 19th century sparked a revival in folklore. Now the alphorn is a revered symbol of Swiss heritage.

The amateur sport of Schwingen, or Swiss-style wrestling, puts two powerful, thick-set competitors in the middle of a sawdust pit with the goal of grabbing the opponent’s oversized shorts to unbalance him and bring both his shoulders down to touch the ground. (The legs of the shorts, which are worn over long trousers, are rolled up to form a handle.) The winner of the duel wipes the sawdust from the loser’s shoulders. A bout lasts about five minutes.

Schwingen festivals are most popular in rural German-speaking areas of the Alpine foothills. A national sport that started as a pastime for herdsmen and farmers, Schwingen (lutte suisse in French-speaking areas) has experienced an upsurge in recent times. It counts more than 5,000 active wrestlers in the national association and five regional bodies, and has its own rules, grips and throws.

Hornussen, a team sport first played in the 16th century on harvested fields by farmers from neighboring villages, is a batting game often described a cross between baseball and golf. Using a stick with a heavy wooden block at one end, teams take turns trying to whack a wooden puck, or disk, as far as possible into the opponent’s area. Defenders wielding heavy wooden paddles try to prevent the disk from touching the ground and get penalty points for failed interceptions. Like a hornet, the puck, called the Hornuss or just Nouss, makes a buzzing sound as it whizzes through the air, thus the name of the game. Hornussen matches take place at Alpine, wrestling and other festivals and are most common in the Mittelland cantons of Bern, Solothurn and Aargau. A national governing body and regional groups organize championships for the various leagues. 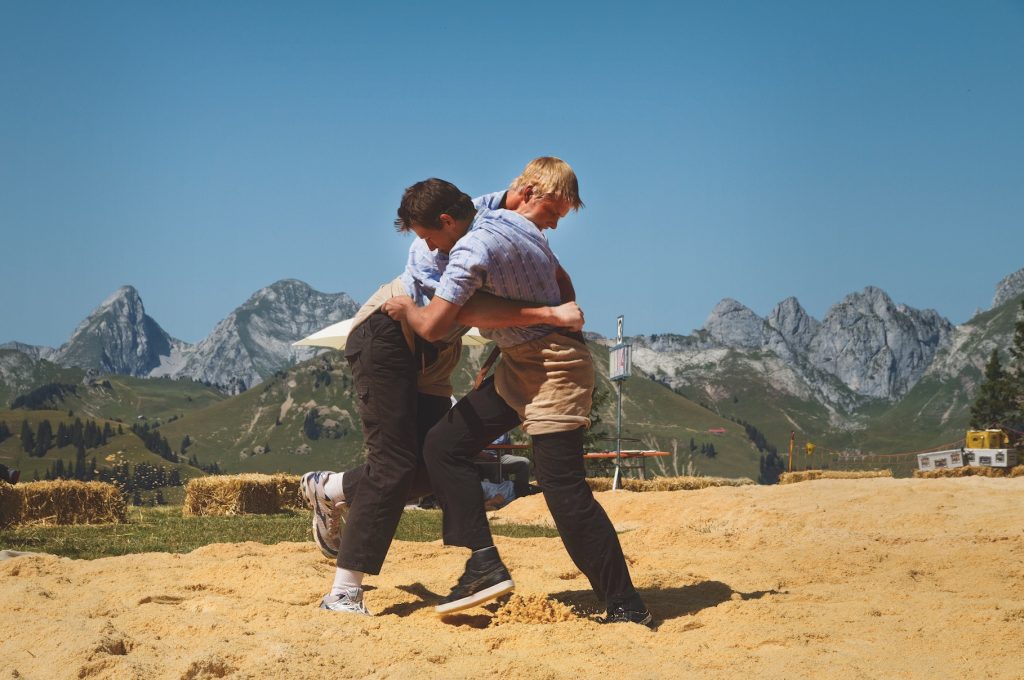 A wrestling festival in the village of Schoenried, near Gstaad in the Bernese Oberland. Switzerland Tourism/Beat Mueller

The art of flag throwing is a magnificent Swiss spectacle and one of the most reverent moments at folkloric occasions such as Alpine carnivals, wrestling and yodeling festivals, and on Swiss National Day, August 1. To the accompaniment of alphorns or bugles, performances involve the swinging of the country’s square, red-and-white flag back and forth on a short staff and then throwing it into the air and catching it by the staff. Flag throwing requires great concentration, and while it may look easy, twirlers need to be proficient in the more than 90 regulated swings. Central Switzerland is a stronghold of the sport. On Wednesday evenings from June through August, the Lake Lucerne town of Brunnen stages alphorn concerts with flag twirling.

Cows in Alpine regions, along with the cowherds who look after them, spend 100 days each summer in remote pastures above the tree line. When they make the early-summer ascent, communities host festive processions of costumed herdsmen and women leading cows decked out in flowers and huge bells. The ritual is repeated at the end of September when they return to the valley for the winter. Completion of the Alpabfahrt (Alpine descent) is celebrated with a carnival in which villagers and visitors enjoy a time of eating, music and dance.

Alp cheese, a protected term for cheese made when the cows are summering in high-mountain pastures, is mainly produced by hand in a big kettle over a wood fire. A prized specialty, it derives its special flavor from the hundreds of varieties of herbs in the Alpine pastures and the crystalclear mountain water. Visitors can see the cheese maker at work while touring and tasting at show dairies and cheese cellars. At the end of the summer pasture season, Alpine farmers compete in regional cheese competitions, which are often associated with a festival or an Alp cheese market.

Cows also take center stage in Valais, where rural areas put on cow fights (Kuhkämpfe in German, Combats de Reines in French) featuring the canton’s traditional Hérens breed of cattle. Famous for their sense of hierarchy and feistiness, the massive, bell-wearing beasts are known to charge and lock horns, and they do so, two at a time, in bloodless bovine battles that attract both cattle breeders and spectators. It doesn’t get any more Swiss than this.

For many people around the world, the Heidi books written by 19th century Swiss author Johanna Spyri continue to perpetuate the idealized image of Alpine Switzerland. In what today is known as the Heidiland holiday region, Heidi fans in Canton Graubünden search out the hamlet of Maienfeld, home to the Original Heidi House (with furnishings from Heidi’s time) and Johanna Spyri Museum Heididorf, a nearby village and gift shop with Heidi souvenirs and a tiny post office with a special Heididorf postmark.