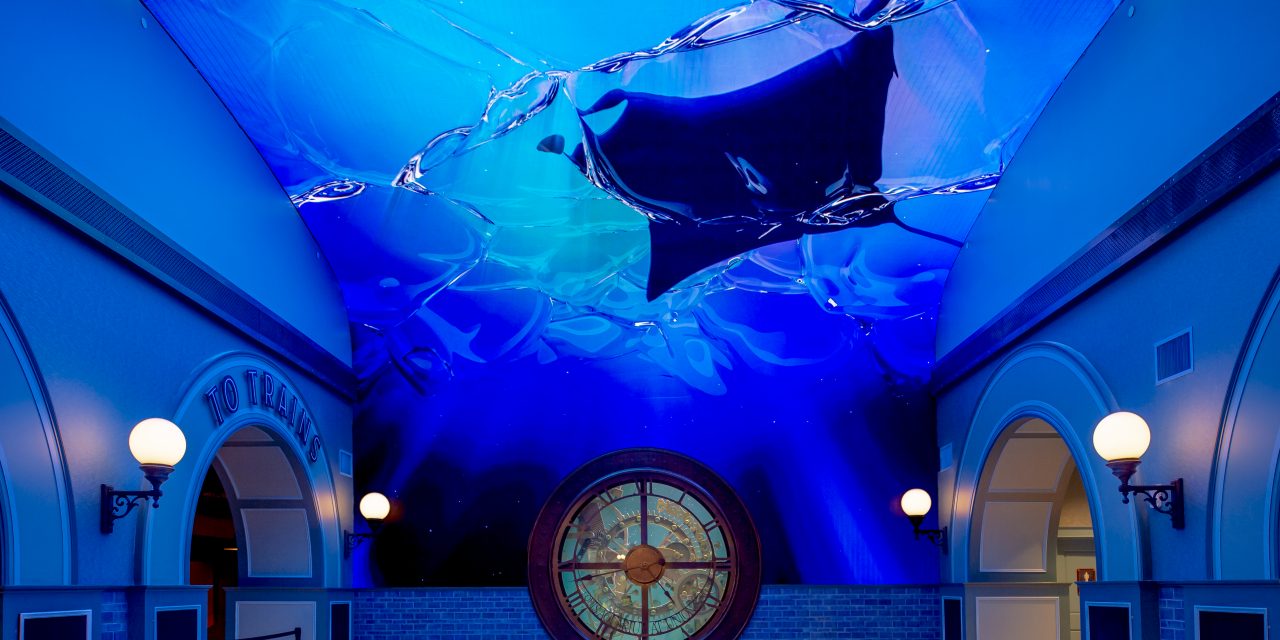 It’s all about life underwater, but visitors to the newest tourist attraction in St. Louis will also spend some time looking up.

First of all, those who visit this shiny new attraction can’t help gaze upon the architectural splendor that looms overhead, as the St. Louis Aquarium at Union Station has been built beneath the massive steel girders of a train shed that once housed the platforms of a busy and historic depot.

Aquarium-goers also crane their necks at Shark Canyon, the largest habitat and one whose J-wall arches over their heads. Some of the best memories revolve around the sharks and “horned” devil rays that glide across the ceiling of water. Puffer fish, sea turtles, the giant Pacific octopus and other species also delight wide-eyed visitors looking up or pressing their noses against the expansive main window of the 250,000-gallon saltwater tank. 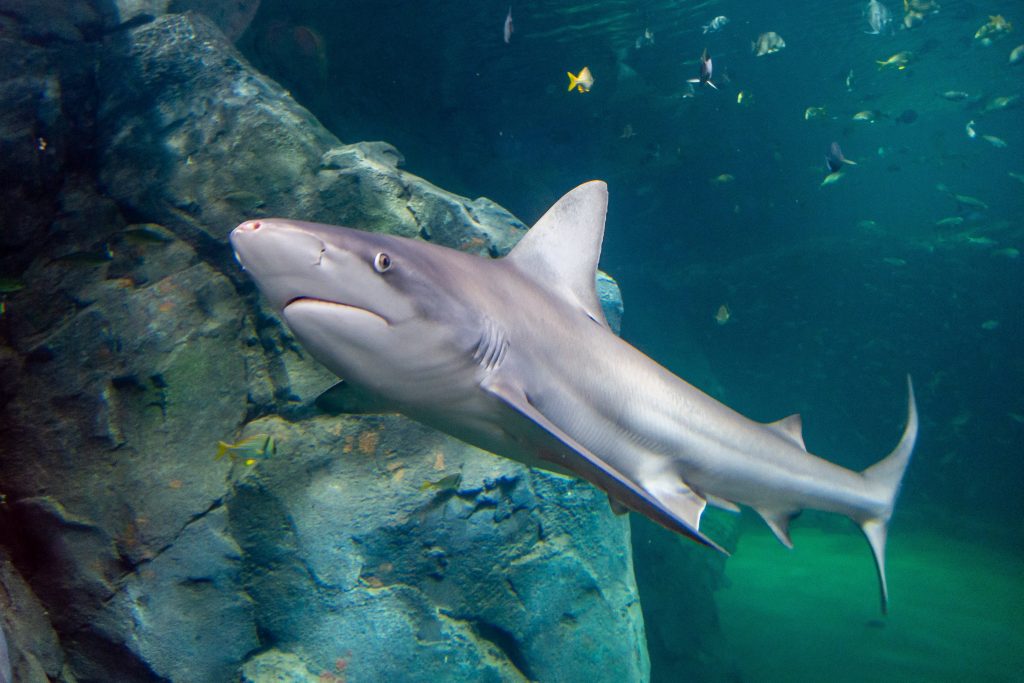 The St. Louis Aquarium, which opened last December, is just one part of a $187 million family entertainment complex that also includes the St. Louis Wheel, a mini-golf course, carousel and restaurants, all centered around a plaza behind the St. Louis Union Station Hotel, a member of the Curio Collection by Hilton and Historic Hotels of America.

The two-story aquarium, in space once occupied by a popular shopping mall, is not on the grand scale of Chicago’s Shedd Aquarium or Atlanta’s Georgia Aquarium. But it has six alluring galleries, offers hands-on fun and is more manageable than larger venues that demand a longer attention span.

The aquarium showcases aquatic life in local rivers and streams as well as the Amazon and distant oceans. The Confluence Gallery, highlighting rivers that converge in St. Louis, provides a window on fish inhabiting the Mississippi and Missouri, from bass and crappie to the region’s “living fossils”—the paddlefish and longnose gar.

“Monster” residents of the Global Rivers Gallery include the Amazon’s strange-looking red-tail catfish and red-bellied piranha, a sparkly fish that looks like it was dipped in glitter. Also from the Amazon: the poisonous bumble bee dart frog (whose poison is used on darts). 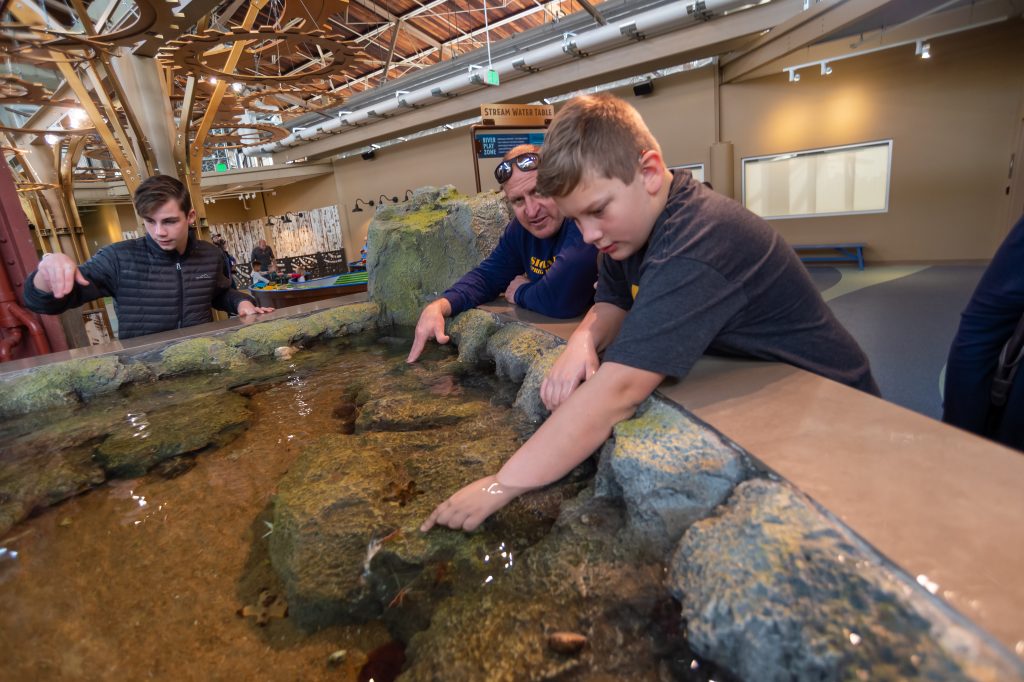 Touch pools in the aquarium let guests pet a shark, caress a slippery stingray, and feel the shell of a horseshoe crab, bumpy skin of a sea star and protective spine of a pencil urchin. Other interactive experiences allow visitors to ask questions of a diver inside Shark Canyon and chat with the Tommy Otter character that appears on screen at the North American river otter exhibit. Perhaps the most bizarre encounter is having your hands nibbled in a pool swarming with tiny doctorfish. (They’re actually used to chew off dead skin in spa treatments.)

Sports fans will appreciate the display of a blue lobster, a rarity as only one in about two million lobsters are blue. Named Lord Stanley the Lobster, the aquarium’s first resident was donated by Arnold’s Lobster & Clam Bar in Eastham, Massachusetts, after the St. Louis Blues beat the Boston Bruins to win 2019 Stanley Cup Championship, a first for the hockey team. Enterprise Arena, the Blues’ home, is two blocks from Union Station.

A ropes course, ideal for team building, is a separate-admission attraction on the aquarium’s second level.

Outside the aquarium, on the boardwalk surrounding the lake in the plaza (called Train Park), the fun with fish continues with vending machines that dispense pellets for feeding the Japanese koi. Overlooking the lake (more like a pond) are Landry’s Seafood Restaurant, St. Louis Union Station Soda Fountain and The Train Shed, a gastropub featuring burgers, pizza, country-fried steak, pork steak (a St. Louis specialty) and 25 classic cocktails. All offer the option of outdoor seating. 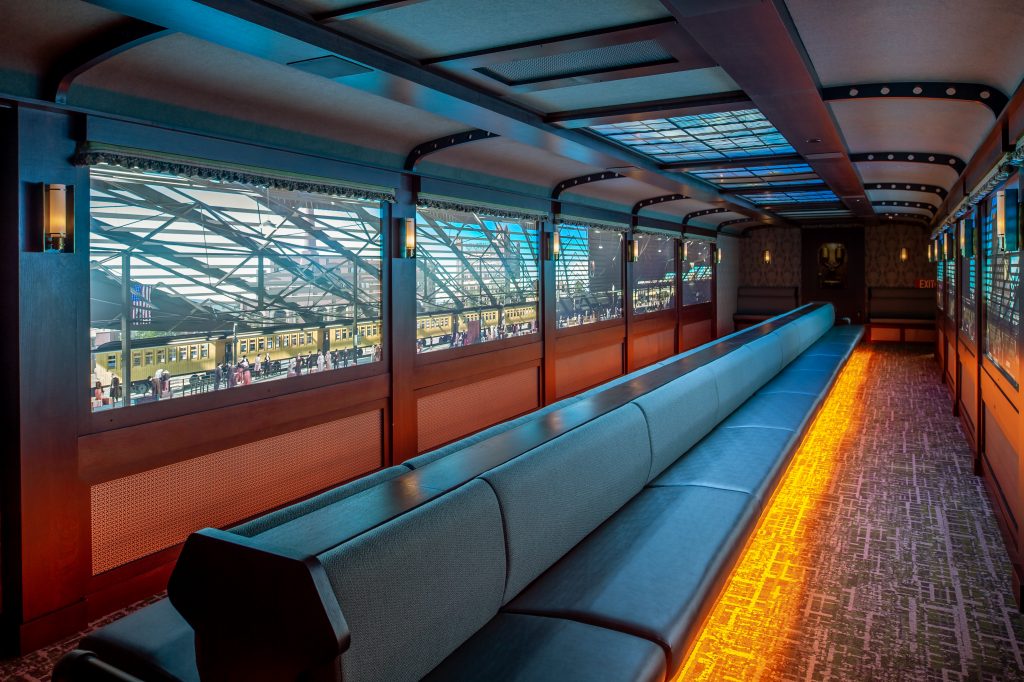 As a nod to its location in historic St. Louis Union Station, the aquarium orients visitors via a “train journey.”

Visitors to Train Park will notice some vintage railcars on the tracks. Every holiday season, these cars are transformed into the Polar Express, though this year they will remain stationary. In whimsically decorated tents on the plaza, the walk-through event, set to the motion picture soundtrack, lets guests interact with characters from the holiday book classic about a boy’s search for the real meaning of Christmas. Each guest receives a cookie, hot chocolate and, for those under 12, a bell. Families are encouraged to wear holiday pajamas.

Combo tickets for the aquarium, wheel, Polar Express and other attractions are available. At this time all tickets must be purchased online in advance.

More entertainment awaits in the train-themed St. Louis Union Station Hotel, which encompasses the Romanesque-style headhouse and clock tower of the castle-like 1894 landmark on Market Street. Its Grand Hall lobby lounge, perhaps the most magnificent public space in St. Louis, each evening presents kaleidoscopic 3-D laser light shows on the barrel-vaulted ceiling, with themes ranging from Beatles and classical music to St. Louis Blues action and Union Station nostalgia. Once the station’s waiting room, this sumptuous salon is a symphony in gold leaf, stained glass, stenciling, plasterwork, statuary, mosaics and green glazed terra cotta bricks. A marble bar stretches 65 feet down one side of the room.

The hotel’s premium guest rooms are lodged in the high-ceilinged headhouse and include 28 recently added nests in the clock tower section. They’re decorated with train artwork and framed historical information, and bear the names of famous railroads and their trains. Vintage Pullman advertisements touting the luxury of passenger rail travel adorn the hallways. Balconies on the third and fourth floors, accessible only to guests in headhouse rooms, look down on the cavernous Grand Hall. Besides rooms in the headhouse, the hotel accommodates guests in two modern, six-story wings under the 11.5-acre train shed.