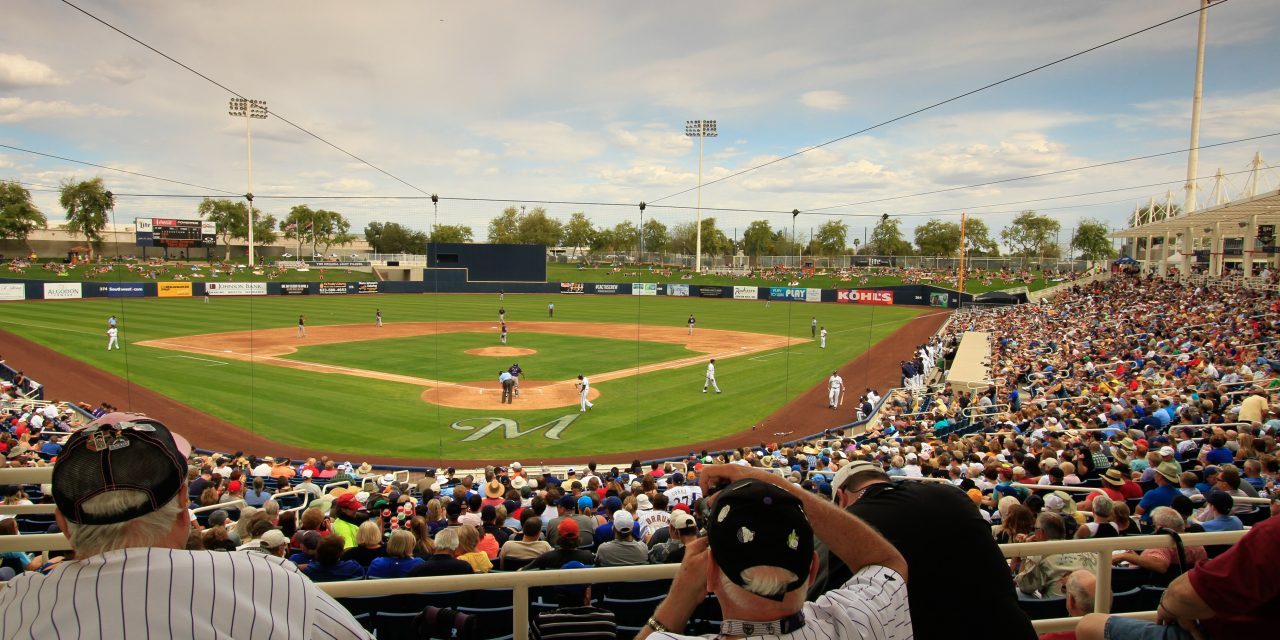 Big-league baseball and warm weather is a perfect combo

For baseball fans suffering from the winter blues, spring can’t come soon enough. Happily, those itching for the Major League Baseball season to begin can speed up the calendar by scheduling a desert getaway in Arizona’s valley of the sun. They’ll gladly trade ice and snow for sunny skies, temperatures in the 70’s and a chance to watch their favorite team in action.

Every February and March, the Greater Phoenix area hosts 15 MLB teams that report for spring training. More than 200 Cactus League exhibition games are played in 10 stadiums in eight cities scattered across the thriving metropolitan area. No two ballparks are more than 45 minutes from each other and each has special areas for groups.

The best part of a spring training game is the intimacy you don’t find during the regular season. Because of the smaller size of the parks, you’re seated closer to the action and can more easily see the players without binoculars. The crack of the bat and smack of the catcher’s mitt are more resounding. Players are more accessible for autographs and photos—at least they will be once the pandemic is over. Ticket prices are affordable, and everything is more laid-back than in prime time. With both star players and promising newcomers on the diamond, fans get a revealing preview of the upcoming season.

The influx of tourists during baseball spring training gives a big boost to Arizona’s economy. Six out of ten fans are from out of state.

Not only do vacationers attend ball games, but they take advantage of a powerhouse line-up of Phoenix-area pleasures—from all-star resorts, spas and golf courses, to first-rate shopping and dining, to outdoor adventures like hot air ballooning, horseback riding, mountain hiking and biking, and ATV tours in the Sonoran Desert. Arizona certainly has the bases covered.

Several of the stadiums host two teams. The Peoria Sports Complex in Peoria has been the spring training and player development home of the Seattle Mariners since 1994, and the San Diego Padres have trained there since their inception in 1969. Each team has six big league-sized practice fields, several half-fields, a clubhouse, and indoor/outdoor batting tunnels and cages. In the middle is a 12,000-seat stadium. 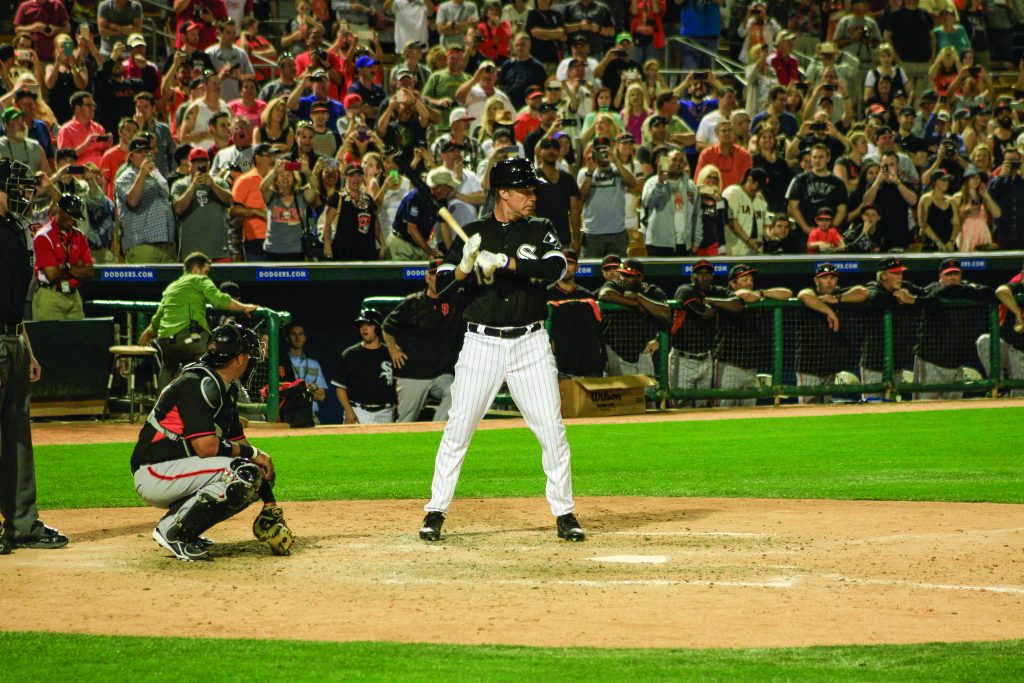 Camelback Ranch in Glendale is the spring training home of the Los Angeles Dodgers and Chicago White Sox.

Goodyear Ballpark in Goodyear hosts Ohio’s MLB teams—the Cleveland Guardians and Cincinnati Reds. The Los Angeles Dodgers and Chicago White Sox play at Camelback Ranch in Glendale, while Salt River Fields at Talking Stick in Scottsdale is home to the Arizona Diamondbacks and Colorado Rockies. Both the Kansas City Royals and Texas Rangers play at Surprise Stadium in Surprise.

The Cactus League’s highest-capacity venue is state-of-the-art Sloan Park in Mesa. Nicknamed Wrigleyville West, the Chicago Cubs’ spring base has touches that mimic the team’s venerable Wrigley Field, the second-oldest ballpark in the majors. Perennially leading the league in attendance, Sloan Park has room for 15,000 fans, including a lawn area that accommodates 4,200. Fans can pose with their name in lights at a replica Wrigley Field marquee and feast on Italian beef sandwiches, Home Run Inn pizza and Chicago-style hot dogs with all the trimmings. The brick wall behind home plate, the clock atop the video board and the light towers’ arch design also pay homage to Chicago’s historic North Side ballpark.

Other Cactus League stadiums that offer reminders of parks back home include American Family Fields of Phoenix, where Milwaukee Brewers followers can sink their teeth into fried Wisconsin cheese curds or a juicy Klement’s bratwurst. They can watch the between-innings Klement’s Sausage Race and tailgate in the parking lot, just as they do at American Family Field in Milwaukee.

At Goodyear Ballpark, Reds fans can enjoy a Skyline Chili dog, and you’ll find Cleveland’s famous Bertram Ballpark Mustard as well. The legendary garlic fries served at the San Francisco Giants’ home stadium in California delight Bay Area residents at Scottsdale Stadium. Ike’s deli sandwiches, another Bay Area favorite, are a signature food at Mesa’s Hohokam Stadium, spring training ground of the Oakland Athletics. The park, once the Cubs’ spring base, boasts the most shaded seats in the league and largest scoreboard as well.

To enhance the fan experience and the conditions for ballplayers, spring training parks keep their facilities up to date by investing in renovations. The Los Angeles Angels’ picturesque Tempe Diablo Stadium in Tempe, for example, has announced plans for major improvements to be done in two phases. The oldest Cactus League park, it was built in 1968. Phase 1 of the planned renovation, which could be ready for spring training 2022,  includes a new, three-level building on the third base side of the stadium to house a home team locker room, suites, Angels offices and a team store. Phase 2 of the redesign includes a new outfield concourse to create a 360-degree concourse experience around the park, along with new shade structures, modernized restrooms and better traffic flow outside the facility. 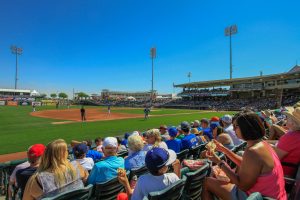 Surprise Stadium in Surprise, Arizona is the Spring Training home of the Kansas City Royals and Texas Rangers.

For a glimpse of the Cactus League through the years, true baseball fans make a pilgrimage to the Mesa Historical Museum, where the exhibit Play Ball: The Arizona Spring Training Experience traces the league’s history. The story is told through photos, a 20-minute video and memorabilia, including autographed baseballs, bats and jerseys.

The 2022 spring training season in Arizona begins February 26 and continues through March 28.

Balls and strikes … pleasant weather … a change of scenery. It’s a win-win for snowbirds and others seeking refuge in Arizona’s Valley of the Sun. Lovers of America’s pastime agree: It doesn’t get any better than this.