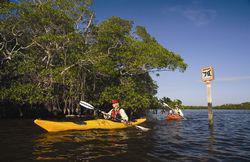 Having grown up in the Sunshine State, I’ve had ample opportunity to travel throughout the state. And even though I now call Chicago home, I get back to Florida as often as I can. In fact, on our most recent visit this past January my wife and I tried to count the number of trips we’ve made and in doing so, honestly lost count. And while all over the state there’s man-made and natural sightseeing attractions galore, I’m always drawn back to Southwest Florida.

On my recent January visit I got up-close and personal with a pod of dolphins off Captiva Island, ate lunch and watched a “snowy” Bears football game on TV while overlooking the Gulf of Mexico on Anna Marie Island, sat in Thomas Edison’s living room in Fort Myers and toured homes of the rich and famous in Naples, where as a colleague says – they earned their money the old fashioned way – they inherited it! To top it off, we did a little gator spotting in Myakka River State Park, just east of Sarasota.

Southwest Florida offers surprisingly rich history, is easy to get around, and the beaches are simply the best in Florida. Just south of Sarasota, Siesta Beach has been named one of the top 5 in the nation. Further to the south, Captiva Island and Sanibel are a shell collector’s dream. All of this is within 2 hours of Orlando’s theme parks and attractions.

I took the opportunity to shoot some video on my recent stay. Video one below is an interview with Elliot Falicone from the Bradenton Area CVB, now known as Anna Marie Island and Longboat Key. Video two is an interview with Chris Pendleton, president and CEO of the Edison & Ford Winter Estate and video three is shot from the back deck of our sightseeing boat cruise, when we were overtaken by dolphins. Very fun!!!