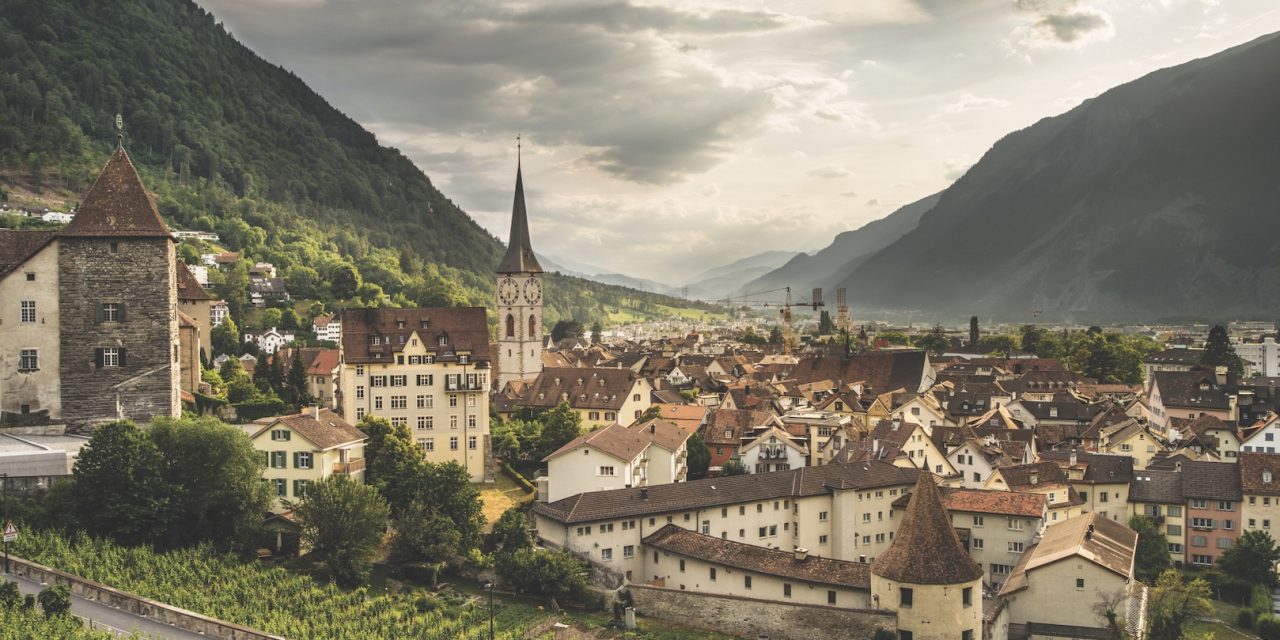 Everyone knows Zurich, Geneva, Lucerne and Bern, but smaller cities scattered throughout Switzerland’s four language regions offer their own pleasures and treasures. While places like Rheinfelden, Bellinzona and La Chauxde- Fonds may not be household words, they deserve a spot on tour planners’ radar.

Here is a sampling of some Swiss cities that are worth getting to know:

The curative waters of Baden’s 18 mineral-rich thermal springs and the city’s resort-like atmosphere attract people from all over the world. They have been coming for their health since Roman times.

Today’s spa quarter with its numerous hotels is an oasis of tranquility, and a wide range of wellness packages is available. A new public bath complex designed by star architect Mario Botta and newly refurbished facilities have enhanced Baden’s reputation as a spa city. (Baden is “baths” in German.)

Situated on the Limmat River 20 miles from Zurich and blessed with a nature-filled cityscape, pretty Baden also features a lively cultural life with excellent museums, a lively theater scene and many international festivals. The Langmatt Foundation, housed in a stately home with beautifully landscaped gardens, has one of Switzerland’s finest art collections, with French Impressionist paintings among its treasures. The Grand Casino is another big draw, as is the car-free Old Town with its historic defensive structures and municipal buildings, gabled houses and cobbled lanes. 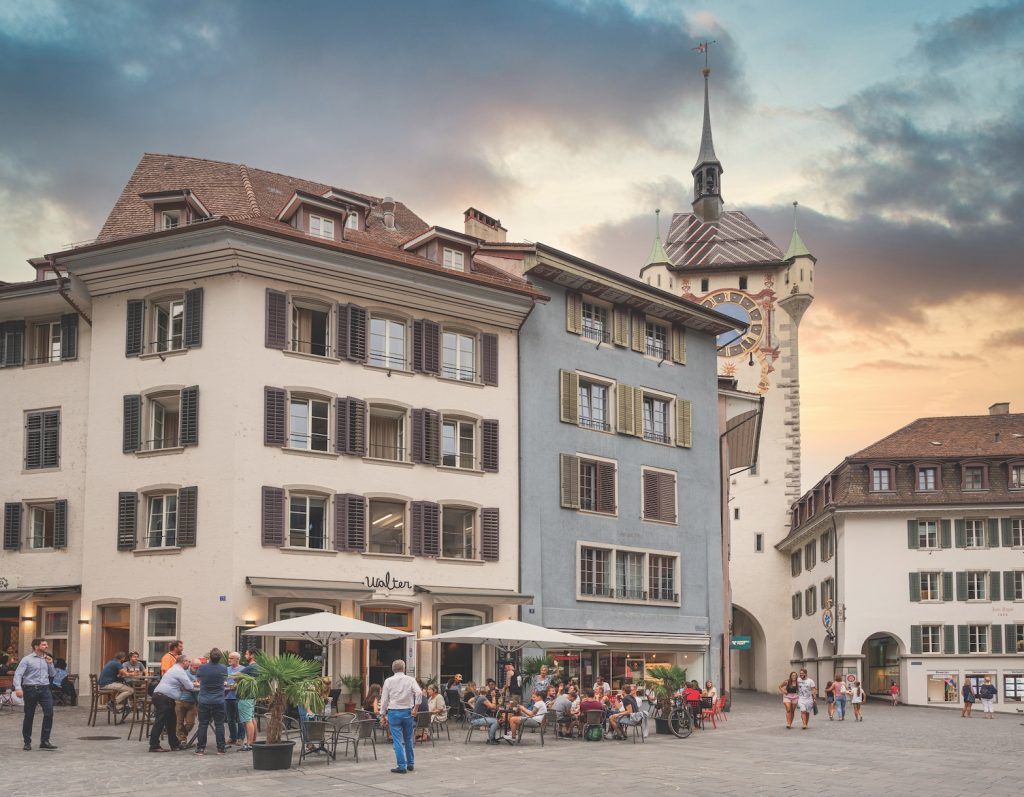 Commanding a beautiful mountain setting at the head of the Rhine Valley in Graubünden Canton, Chur is an inviting Alpine town of twisting alleys and historic buildings. A Mediterranean-style atmosphere permeates the pedestrianized Old Town, a medieval enclave with numerous restaurants, bars, boutiques, museums and galleries.

At one time or another, the Celts, Romans, Ostrogoths and Franks ruled Chur, a gateway to important trade routes and Alpine passes. What remains today is its 5,000-year heritage, documented by Early Stone Age and Bronze Age finds and artifacts from the Roman period. Testimonies to more recent history include the triplenave, 800-year-old Cathedral of the Assumption near the bishop’s residence.

Brambrüesch Mountain, accessible from the city center by cableway, enchants visitors with panoramic views and offers hiking trails through alpine flora. Chur is an ideal location from which to set off for walks and visits to vineyards in the Bündner Herrschaft winemaking region. It is also a jumping-off point for the 26 holiday and spa resorts in the Grison Mountains. The routes of the Glacier Express and Bernina Express scenic trains both pass through Chur.

About one-half of the area’s population speaks German; one-sixth is Italian-speaking; and one-third speaks Romansh and Ladin, survivors of an ancient Romance language.

Bellinzona is strategically positioned in Switzerland›s Italian-speaking Ticino region where the valley narrows on the way to the Alpine passes of St. Gotthard, San Bernardino and Lucomagno. The town acts as a gateway to Italy from the north, and the keyhole to the Alps coming from the south.

Bellinzona’s fortifications, important examples of medieval defensive architecture, have been listed as a UNESCO World Heritage Site. The town’s three well-preserved castles—Castelgrande, Montebello and Sasso Corbaro—were built from the 12th to 15th centuries as part of a fortress complex protecting Switzerland from Italy. Visitors to the castles admire a splendid panorama of the city and the surrounding mountains up to Lake Maggiore. Each castle has a small museum.

Old Town’s picturesque city squares, courtyards and stately neo-Classical theater reveal the history of what is culturally a Lombardy town. Alleyways lead to richly-decorated patrician houses and beautiful old churches. Yet behind the austere charm of the medieval town is the dynamic life of a modern cityscape. Boutiques and cafes offering culinary delicacies invite visitors to shop and linger.

Bellinzona is ideally located for excursions to the holiday resorts of Locarno and Ascona, over Monte Ceneri to Lugano, up the romantic side valleys of the Tessin or northwards into the Leventina, with the Bedretto Valley, or into the sunny Blenio Valley. 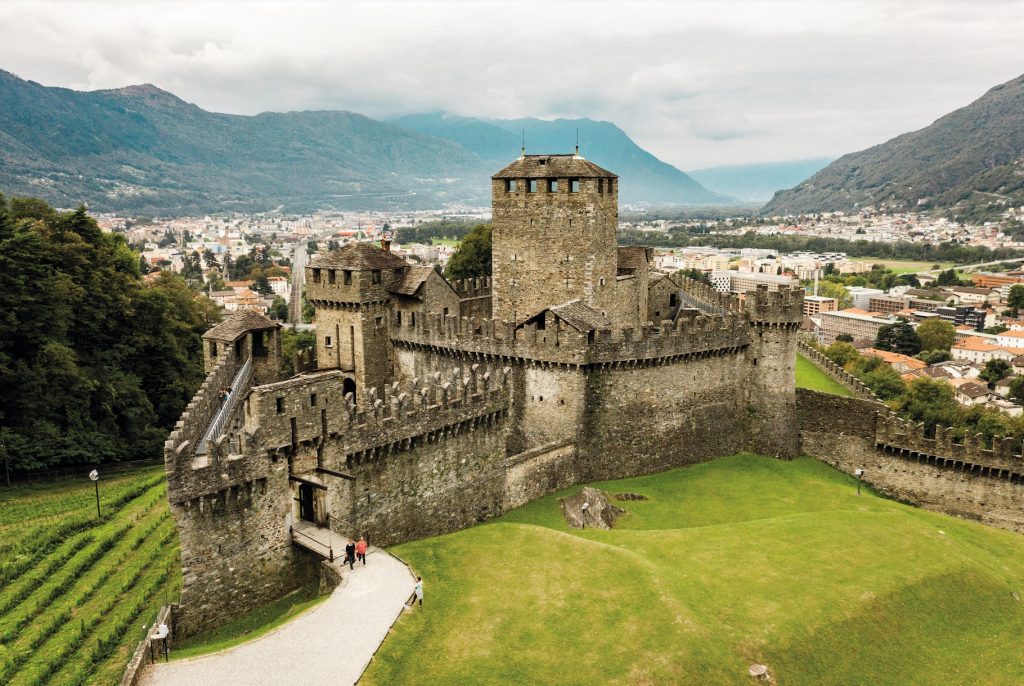 Sasso Corbaro is one of three ancient castles worth a visit in Bellinzona. Switzerland Tourism/Nicola Fuerer

Not far from Basel, at the beginning of the navigable Rhine, lies the charming little town of Rheinfelden. The historic town center with its typical wide market streets and delightful side lanes is an inviting place to explore and shop.

In 1846, when salt baths opened in Rheinfelden, the town of 14,000 people enjoyed international fame. In 2016 the town was awarded the Wakker Prize for the preservation of its architecture. Today, Rheinfelden is a well-known center for health and well-being. Because it is easily accessible by public transport, many conferences and large meetings are held there, and a number of hotels cater to this trade.

Top excursions from Rheinfelden showcase the archaeological site Augusta Raurica, the remains of the oldest Roman colony on the Rhine, and the Riburg salt works in Möhlin. 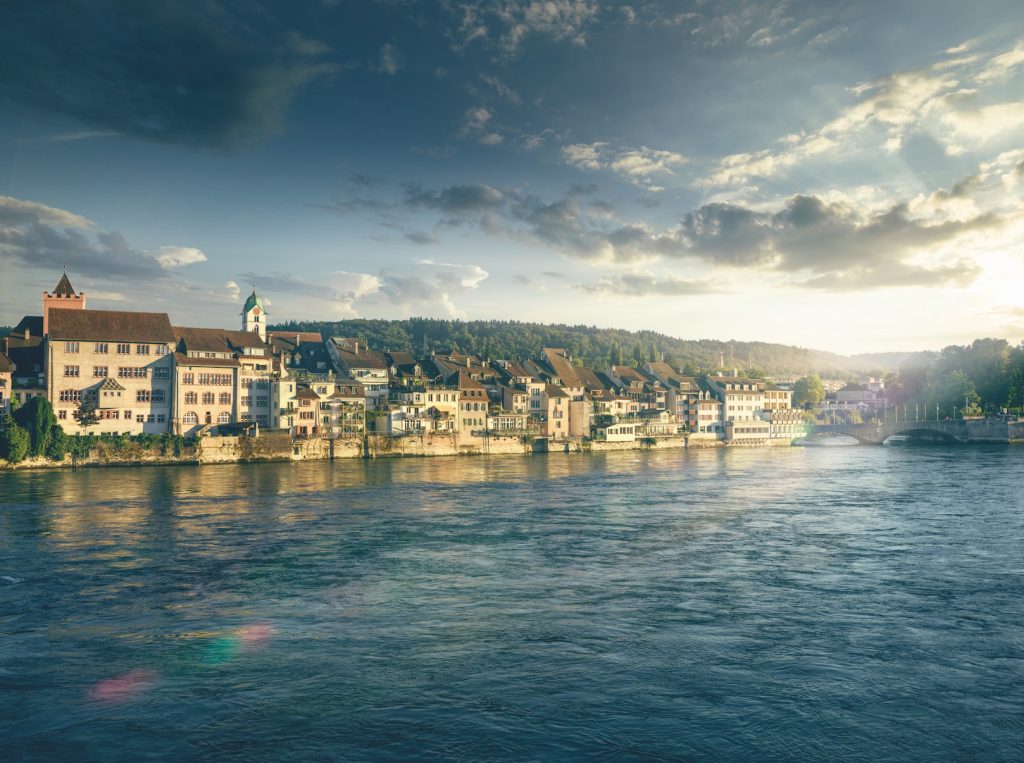 La Chaux-de-Fonds, birthplace of the great 20th century architect Le Corbusier (1887-1965), was the world capital of the watchmaking industry for over 100 years. The first house designed by Le Corbusier is located here, but the main attraction is the International Clock Museum, which has thousands of watches and clocks that illustrate the history of timekeeping from its beginnings in antiquity to the state-of-the-art instruments of today. Museum guests enjoy an audiovisual presentation, multimedia show and interactive exhibits, and they can observe watchmakers as they restore antique timepieces.

Watchmaking was well-established in La Chaux-de- Fonds in the late 1700s, and the city dramatically expanded production of watches and components in the 19th century. La Chaux-de-Fonds had hundreds of watchmaking suppliers and dozens of producers of finished watches. One company, Election, built a large factory complex that employed more than 250 workers and dominated watchmaking in the city for two decades. Today La Chauxde- Fonds is home to such notable watch companies as Greubel Forsey, Corum and TAG Heuer.

The cityscape of La Chaux-de-Fonds, designated in 2009 as a UNESCO World Heritage Site, is characterized by an interesting chessboard design of long, wide avenues created at the beginning of the 19th century. It is dotted with a number of modernist buildings. La Chaux-de-Fonds is the largest town in the French-speaking canton of Neuchâtel. 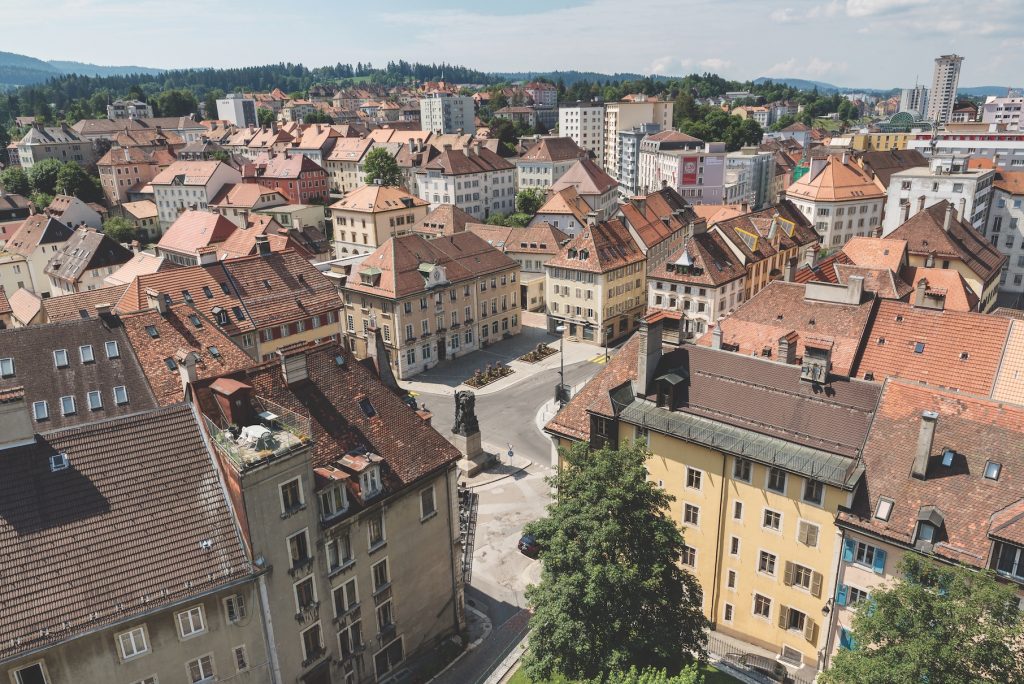 Fribourg, nestled on a large rock promontory, is surrounded on three sides by the Sarine River. It is one of the largest medieval towns in Switzerland, featuring an Old Town with more than 200 Gothic facades from the 15th century. The town also has 11 impressive fountains and 15 historic bridges.

Large sections of Fribourg’s town walls, including gates, turrets and bastions, have been preserved. Built between the 13th and 15th centuries, they represent the most significant piece of medieval military architecture in Switzerland. You can visit the system of walls— they extend for more than a mile—on your own or on a guided tour.

Just north of the cathedral is Espace Jean Tinguely – Niki de Saint-Phalle, a vast gallery with avant garde works by Fribourg-born Jean Tinguely and his wife, Niki de Saint-Phalle. More creations by the two artists can be found on the Sculpture Trail in the town center. From the Neuveville District in the Old Town, a funicular railway takes visitors up to the pedestrianized area of the center, where tightly-packed rows of boutiques, antique shops, student cafes and restaurants line the narrow alleyways.

Fribourg is also a lively, cosmopolitan university town with students from all over the world. You will hear both French and German spoken in this bilingual city, but French dominates the culture and cuisine.

It is worth making an excursion to nearby Hauterive Abbey, an 1137 Cistercian abbey, once a stopping place on the pilgrims’ route to Santiago de Compostela, Spain. 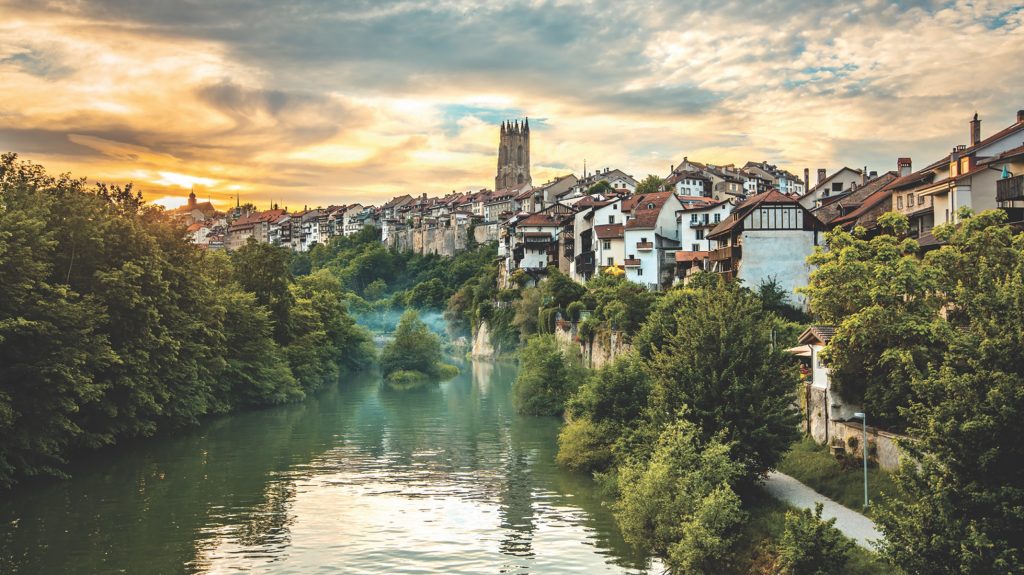 Basking in a Mediterranean climate with nearly 2,300 hours of sunshine a year, the town with probably the best weather in Switzerland lies on the northern shore of Lake Maggiore in the Italian-speaking canton of Ticino. Palm, lemon and fig trees, along with bougainvillea and other subtropical flora, flourish in Locarno, giving the city its special southern charm. The lake promenade offers relaxed strolling.

The heart of Locarno is Piazza Grande, wellknown for its annual film festival. The picturesque lanes of the Old Town lead to the Piazza. Castello Visconteo, a castle dating back to the 12th century, lies at the edge of the Old Town. Splendid upper-town palazzi house fine art collections.

The pilgrimage church of Madonna del Sasso, located above Locarno, is reachable via a short funicular ride to the hilltop hamlet of Orselina. The church is said to have been established after a friar in 1480 saw a vision of the Virgin Mary. The most notable sight in Locarno, it boasts an extraordinary view of the city, mountains and glittering blue lake. Right above the church is the cable car station for rides to the panoramic viewing platform of Cardada/Cimetta, the closest mountain to Locarno. 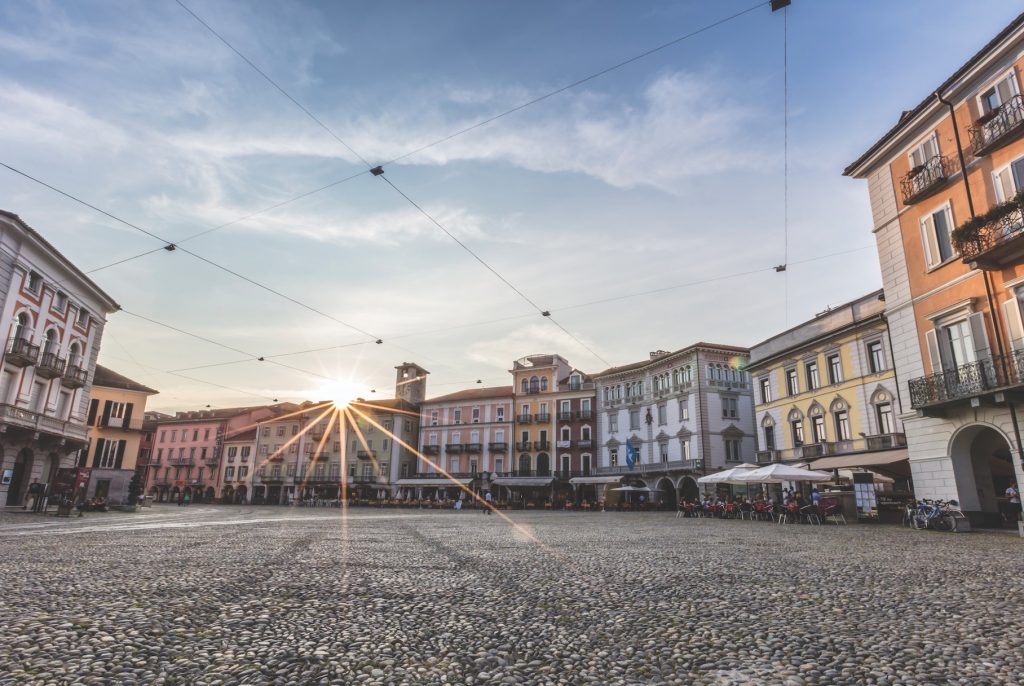