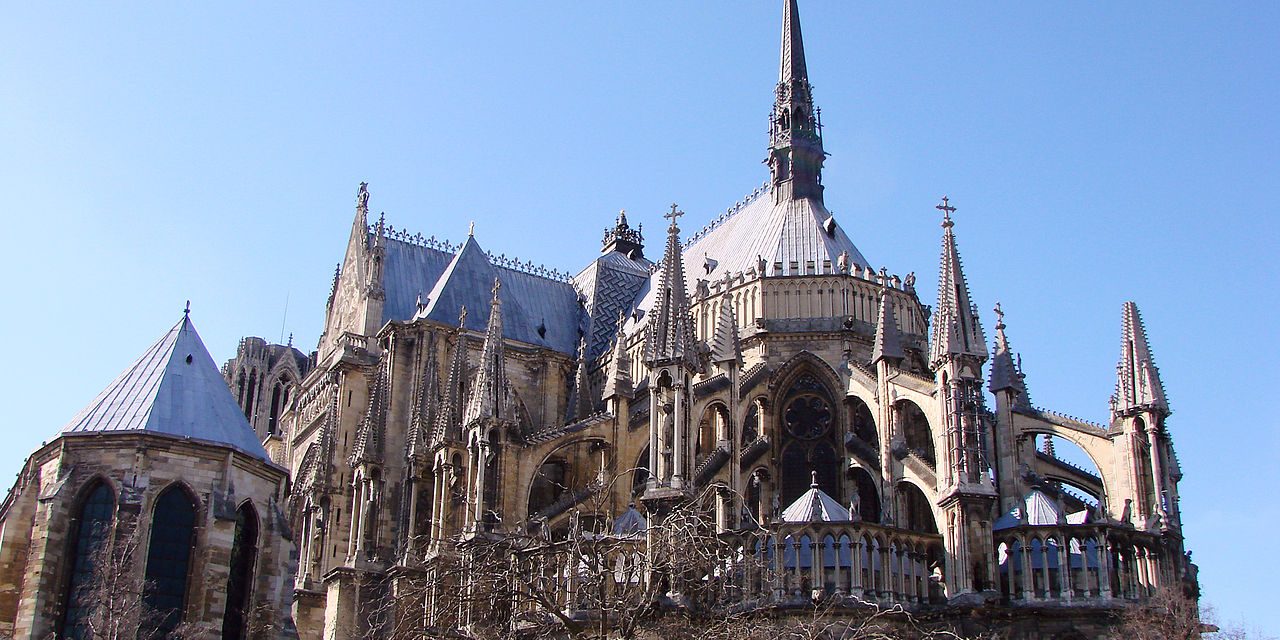 Looking to add a spiritual element to your time in France? Check out the architecture, history and relics of these awe-inspiring French cathedrals during your next trip.

The cathedrals of France are the destination of thousands of visitors and pilgrims every year, and it’s no wonder – these ancient and complex structures, as well as the history and relics contained within, are wondrous sights to behold. While the country itself contains dozens of cathedrals, we’ve made a list of the most captivating cathedrals that should be on everyone’s must-see list. Be sure to check out these six fascinating cathedrals during your next trip.

This grand cathedral, built in the same Gothic style of architecture used for many of France’s cathedrals, is the most recent of at least five structures built on this site. Finished in the early 13th century, it is incredibly well preserved, containing rare original stained glass windows as well as one of the few intact labyrinths installed in medieval churches. This winding woodwork was once created to celebrate Christ’s resurrection during the Easter season and marks his passage from death to life.

The church’s reliquary is the home of the Sancta Camisia, the veil that the Virgin Mary was said to have worn at the birth of Jesus; in addition, the cathedral contains the Puits des Saints-Forts, which by legend is the well where a Roman magistrate once threw the bodies of early Christian martyrs. Though it may make for a grim pilgrimage, those interested in the great French cathedrals should not miss out on its beauty.

Overlooking the River Somme, Amiens Cathedral is the tallest cathedral in France, with the nave’s ceiling reaching almost 140 feet. The church’s greatest claim to fame is that it’s the supposed former resting place of the head of Saint John the Baptist, brought to Amiens from Constantinople in 1206.

Though it was used as a reason to build a grand cathedral on the site when the previous incarnation of the church burned down, the head was later lost; a replica now sits in its place. The best time to visit the cathedral is around the solstices – the church puts on a laser light show, similar to the one at Notre Dame, every summer and every Christmas to show the world what worshippers in the medieval ages would have seen during their visit.

Those who love French history must make this a stop during their trip. Originally founded in the 5th century by Saint Nicaise, the cathedral marks the site where Clovis, the first king of the Franks, was baptized following his conversion. Though the cathedral is notable for its intricate tapestries, it is also the traditional coronation site of the kings of France, a practice that lasted hundreds of years and finally ended with Charles X in 1825. The church’s treasury holds the Holy Flask, a replica of the oil-filled container used by Saint Remigius to baptize Clovis. Though the original flask was destroyed during the French Revolution, its modern-day successor contains a fragment of the old relic.

Traveling through Nice, you’ll come across a sight which at first appears out of place – this is St. Nicholas Orthodox Cathedral, a Russian Orthodox cathedral created to serve the Russian community that settled in France. Dedicated in 1865 to the deceased heir of the Russian throne, the church was once a place of worship for Russian dignitaries, containing a shrine to Saint Nicholas, who is a popular figure among many religions. Though it is a French landmark, as of 2011 the site officially belongs to Russia following a long legal dispute over the church’s ownership. While it serves the Russian Orthodoxy, the church is open to visitors of all nationalities and religions.

Built on the site of a former Gallo-Roman cemetery, this cathedral is considered to be the first Gothic church, as it was completed in 1144. The Basilica serves as Reims’ opposite – while the kings of France began their reigns in Reims Cathedral with their coronations, their reigns ended here with their burials. Most of the monarchs from the 10th to the 18th centuries were laid to rest in the Basilica, though not in perpetuity.

The Basilica of St. Denis was one of the churches most desecrated during the French Revolution, during which the tombs of the monarchs were reopened, and many of the bodies were dumped in a nearby mass grave. Following the revolution and subsequent restoration of the church in 1817, the remains of the monarchs were exhumed and replaced in a special crypt, which now contains a plaque bearing the names of the rulers thought to be contained within.

This famous cathedral is an icon of Paris and functions as the seat of the Archbishop of Paris. It is revered for its elaborate architecture as well as its beautiful Rose Windows, made out of detailed stained glass depicting scenes from the Bible as well as the 12 apostles. Visitors will also be interested in seeing the Bells of Notre Dame, which once called worshippers in to pray and were made famous by author Victor Hugo.

The oldest of the bells, named Emmanuel, was built in 1685 and managed to survive the destruction of the French Revolution, though other older bells did not. Also of note here is the cathedral’s reliquary, which contains a plethora of treasures – it allegedly features the Crown of Thorns, one of the Holy Nails and several relics from saints. Free guided tours as well as audio tours are provided by the cathedral, and both are available in many different languages. Visitors looking for a great view of Paris should be sure to climb the South Tower, though it’s not for the faint of heart – there are 387 steps explorers must brave before they’re allowed one of the country’s best sights.

Between the architecture, history and the relics, visitors should be sure to check out these glorious cathedrals during their next trip to France. Know of any other French cathedrals that simply can’t be missed? Tell us in the comments below!