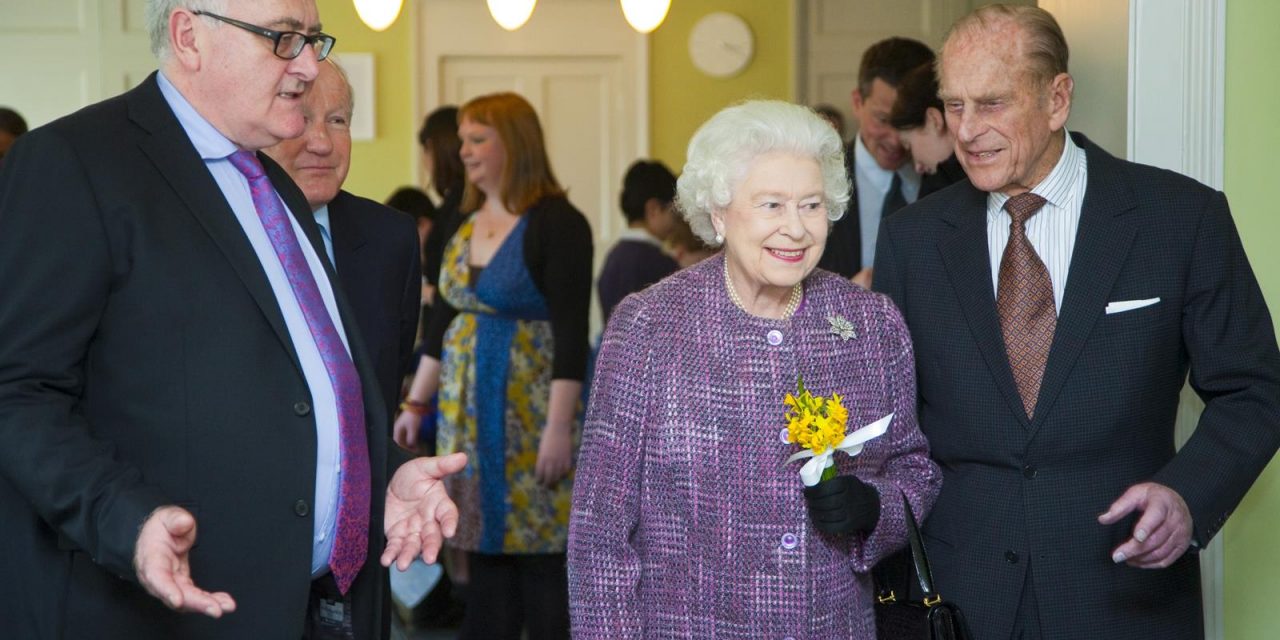 Palaces, churches and other London attractions enchant tourists as they get a peek into the lives of British royalty, past and present.

As is often the case when royal occasions in Great Britain grab the headlines, the eyes of the world soon will be on London as Prince William and his wife Kate welcome their second child. TV reporters will be camped outside the hospital, tabloids and celebrity magazines will have a field day, and royal watchers on both sides of the pond will eat it up.

England prides itself on tradition, and, though the monarchy’s role these days is largely ceremonial, the royal presence continues to be very much a part of the country’s national identity—and its tourist product.

London, always ready with a slice of storybook pageantry, delivers pomp and circumstance like nowhere else. On every visit I’m set on getting a new glimpse into the lives of the British royal family, past or present, hoping that some of the majesty will rub off. For many Americans, especially first-time visitors, regal sights usually top their checklist. Followers of the Windsors’ comings and goings find it unthinkable to leave town without making some kind of royal connection to tuck away in their travel memories.

Because London’s treasures are so vast, you’ll barely scrape the surface on a brief whirl, so why not concentrate on a few areas with a royal attraction or two. 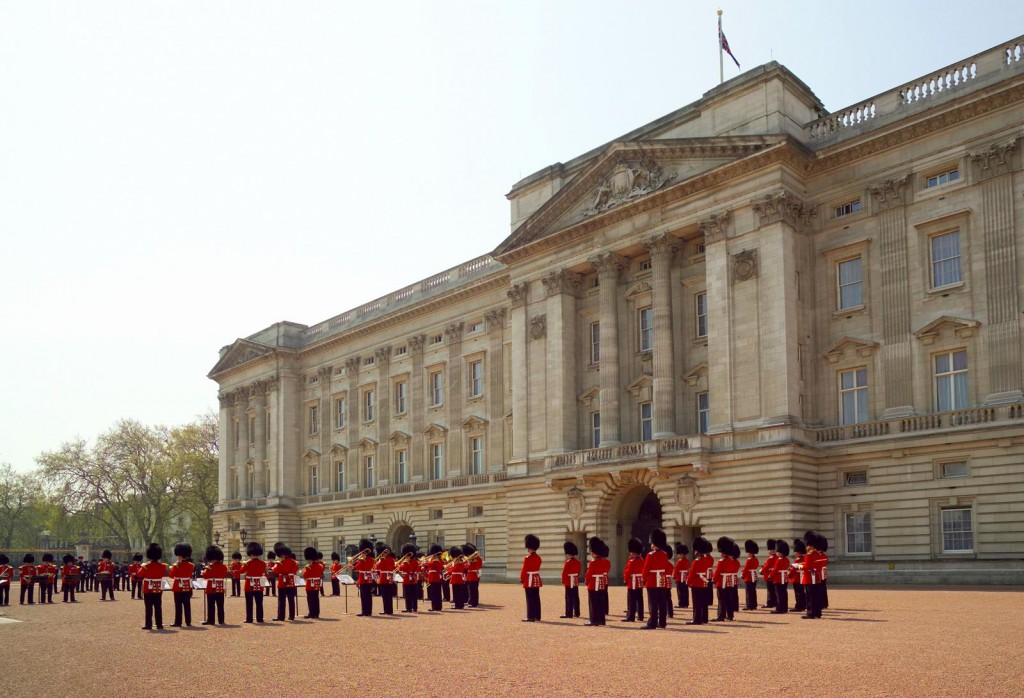 The Changing of the Guard ceremony in the courtyard of Buckingham Palace. (photo credit: visitlondonimages/pawel libera)

Many first-timers make a beeline to the centrally located Westminster district, the seat of government and a tourist magnet crammed with instantly recognizable landmarks. For a real pinch-me-I’m-in-London moment, nothing rivals the Changing of the Guard at Buckingham Palace, the monarch’s official residence since Queen Victoria acceded to the throne in 1837. Straight from a travel video, the hour-long ceremony (daily from May to July, alternate days the rest of the year) features marching soldiers in red tunics and bearskin hats accompanied by a military band, culminating with the captains of the old and new guards symbolically transferring the keys to the 775-room palace. If Queen Elizabeth II is in residence, the Royal Standard will be flying from the rooftop; otherwise, it’s the Union Jack. Timed-admission tours offered in August and September, when the Queen and Prince Philip are on holiday in Scotland, allow the public to go behind the gilded gates and see some of the formal rooms.

On the other side of St. James’s Park, one of London’s royal parks, another popular photo opportunity awaits at Horse Guards Parade on Whitehall, a triumphal avenue where the daily guard changing ceremony involves two cavalry sentries in red coats and plumed helmets. 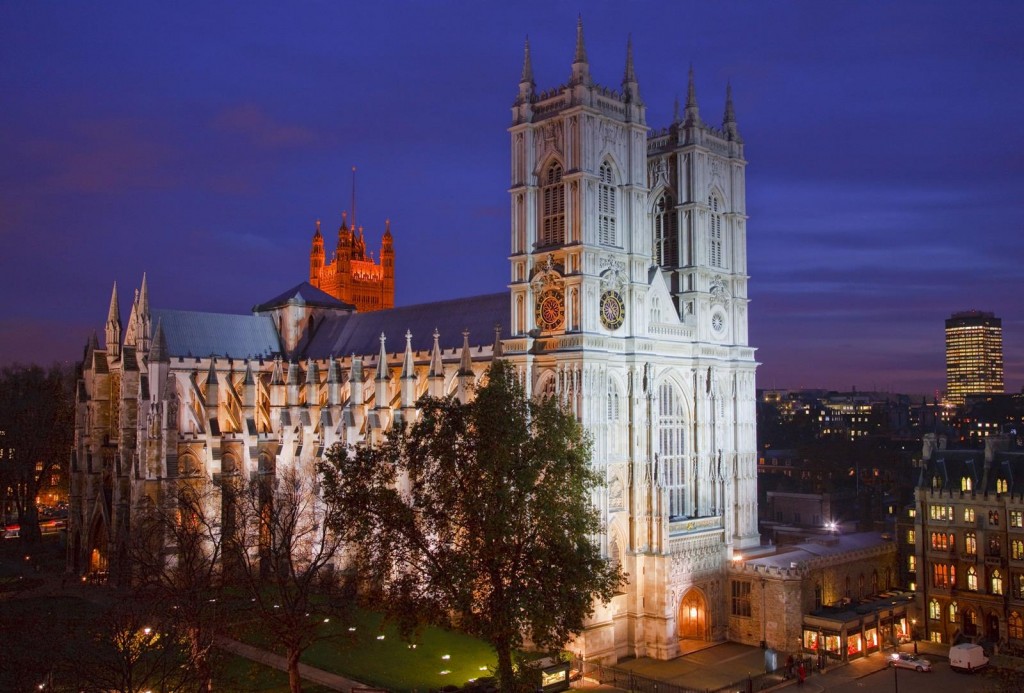 Closer to the River Thames, London at its postcard best continues with the Houses of Parliament, Big Ben and the most famous church in Britain. The world knows Westminster Abbey as the place of William and Kate’s 2011 wedding and Princess Diana’s funeral 14 years earlier. Under the direct jurisdiction of the monarch, the Gothic church has been the site of almost every coronation since the crowning of William the Conqueror in 1066, and many English sovereigns are buried there. 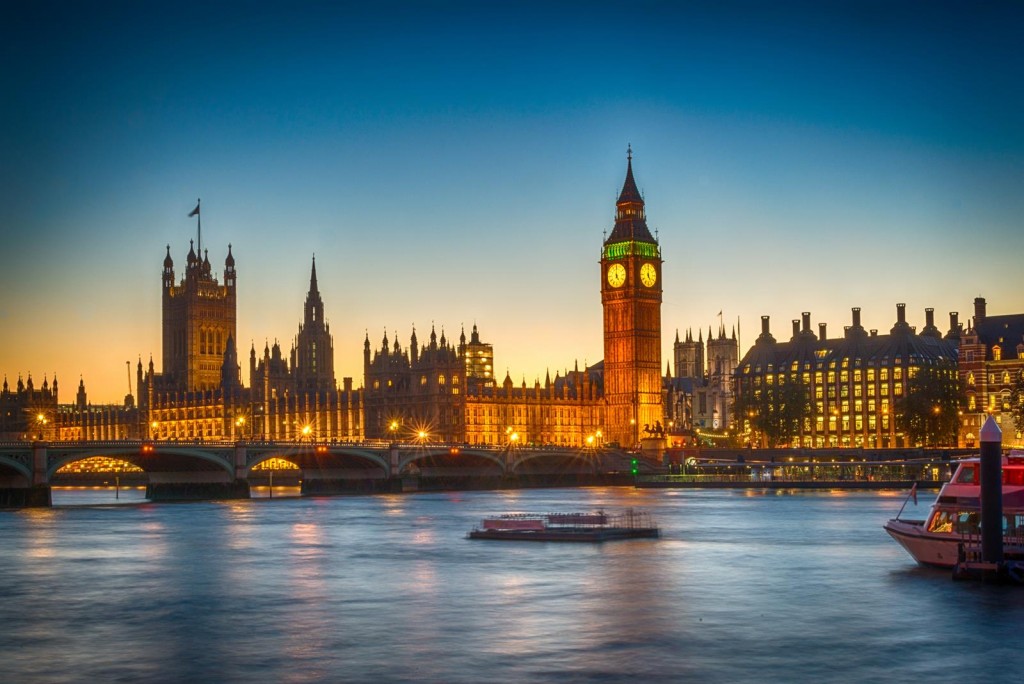 The Houses of Parliament on the River Thames, London. (VisitEngland/Diana Jarvis)

The aristocratic St. James’s neighborhood, bordering St. James’s and Green parks, is home to Prince Charles and his wife Camilla, Duchess of Cornwall. They live in a four-story mansion in the St. James’s Palace complex—Clarence House—the same place where England’s beloved Queen Mother lived until her 2002 death at age 101. Prince Harry also has quarters in Clarence House, which allows tours of its ground-floor rooms every summer (August 1-31, 2015). Dating from the 16th century, the palace itself, notable for its red-brick Tudor gate tower, is the London digs of Princess Anne and formerly housed the likes of Queen Elizabeth I and King Charles I. Its chapel (open to the public for Sunday worship) was the site of Prince George’s christening in 2013 and resting place for Princess Diana’s coffin for five days before the funeral. 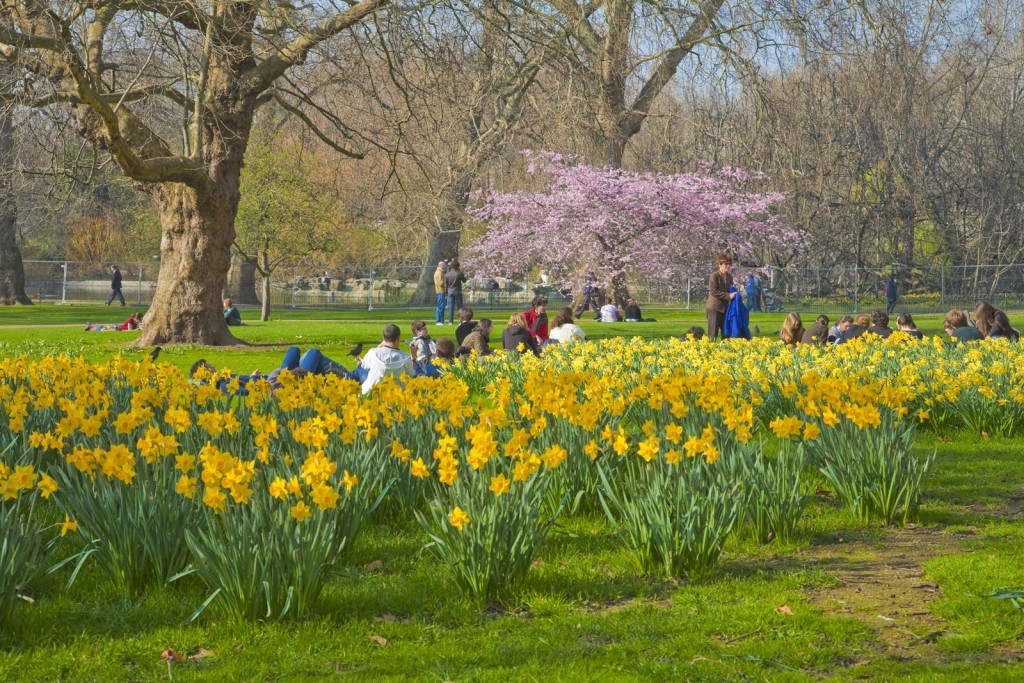 A walk around the St. James’s district, an enclave that reeks of privilege and old money, takes you past traditional gentlemen’s clubs and exclusive shops catering to men, hallmarks of the neighborhood. Several shops on Jermyn (pronounced “German”) and surrounding streets display proof of royal warrants, indicating they’ve received appointments from the households of Queen Elizabeth, Prince Philip or Prince Charles to provide goods and services. Bespoke shirtmaker Turnbull & Asser, which has held a warrant from Prince Charles for decades, proclaims in a window sign, “Putting the peacock amongst the pigeons since 1885.”

Prestigious Piccadilly Arcade connects Jermyn Street to Piccadilly, the busy thoroughfare that feeds into tourist-thronged, neon-lit Piccadilly Circus, the “Times Square” of London. On Piccadilly, a souvenir stop is warranted at Fortnum & Mason, a stately department store that has been given many royal warrants since its founding in 1788. Best known for the gourmet picnic hampers in its fancy-foods emporium, the store displays a gold crest in the window with the words “By Appointment to Her Majesty Queen Elizabeth II, Grocers and Provisions Merchants.” The staff, formally attired in black tailcoats and pinstripe pants, is friendly and chatty, not at all snobby. A line of organic products (tea, honey, jams, wine) is marketed under the auspices of Highgrove Estate, the country home of Prince Charles. 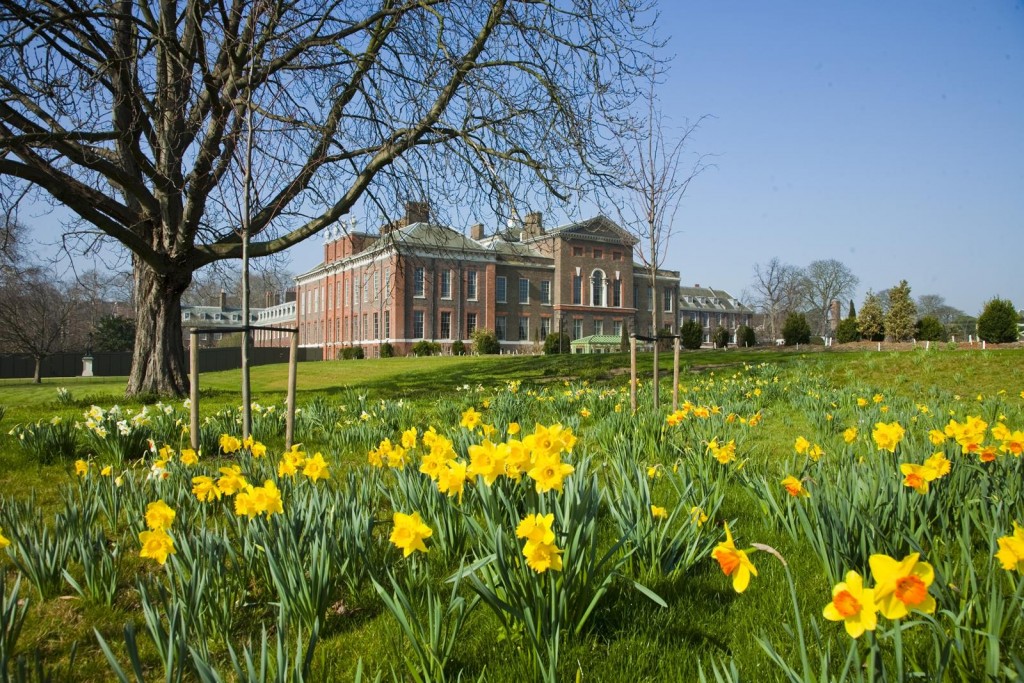 On a recent trip to London, I got a peek inside Kensington Palace, a building I previously had seen only from the outside, and recalled witnessing the sea of flowers that blanketed the grounds after Princess Diana’s death in 1997. She and Prince Charles raised their boys in this handsome brick residence, today the London address of Prince William, Kate and baby George (not to mention three of the Queen’s cousins). As the young family lives in a section that’s off-limits to the public, tourists don’t get to prowl around their bedrooms. But while the little heirs to the throne are being diapered on one side of the building, anyone who pays admission can take a self-guided tour of the State Apartments, which are divided into four exhibit areas. One is devoted to Queen Victoria, who grew up at Kensington Palace. The temporary exhibition Fashion Rules (through summer 2015) has ceremonial dresses worn by Queen Elizabeth II, Princess Margaret and Diana Princess of Wales.

The Tower of London, situated next to the Thames, is actually a vast castle complex of 22 towers, the most perfectly preserved medieval fortress in the country. A must-see attraction that goes back almost 1,000 years, it has served as a royal residence, royal mint, prison, and place of execution for those who opposed the Crown. Yeoman Warders who guard the Tower of London (nicknamed “Beefeaters”) give entertaining tours that regale visitors with bloody tales of torture and beheadings, two victims being wives of Henry VIII. The biggest draw is the Crown Jewels exhibition in the heavily fortified Jewel House; viewed from a moving walkway, the priceless collection includes the Imperial State Crown, worn by the Queen for the annual State Opening of Parliament and sparkling with 2,868 diamonds plus other assorted gems.