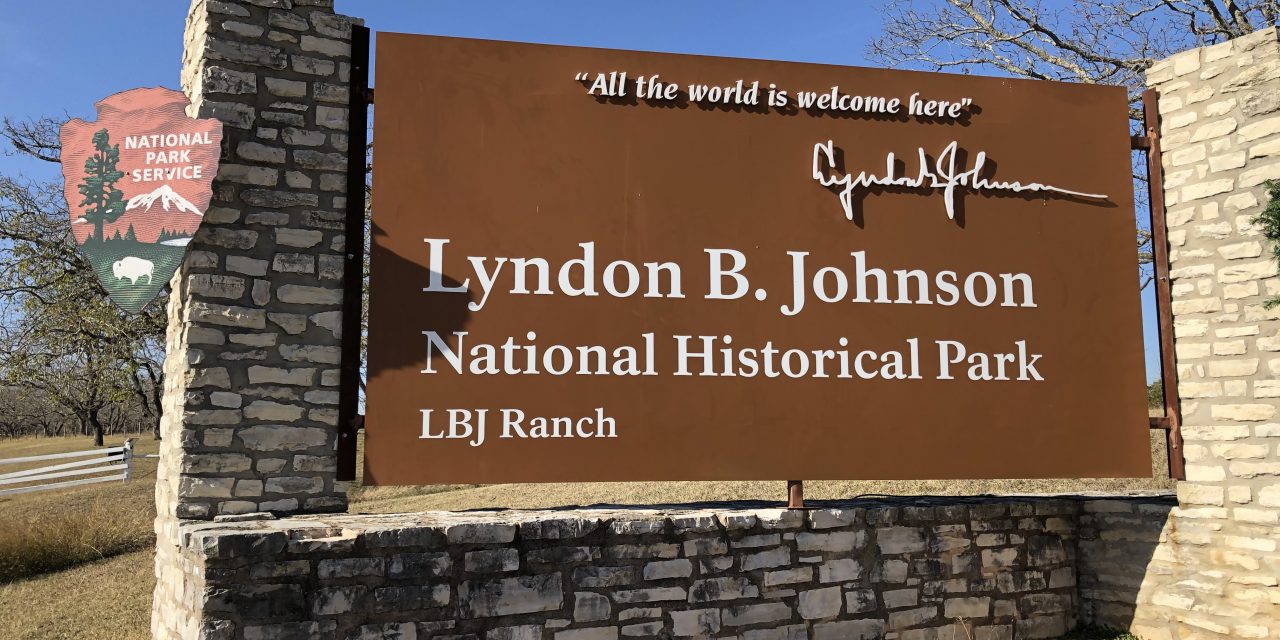 State and national parks in central Texas spotlight the life and legacy of Lyndon B. Johnson, America’s 36th president

Lyndon B. Johnson, president of the United States from 1963-1969, took great pleasure in showing guests around his ranch in Texas Hill Country, relishing the freedom of driving his own car through landscapes he had known since boyhood.

On this plot of land bordering the Pedernales River, LBJ was born, died and is buried. A sentimental place for him, it’s where he spent much of his presidency relaxing, hosting friends and dignitaries, and grappling with national affairs in a home that became known as the Texas White House.

Tourists hankering for 1960s nostalgia can revel in the past on their own drive through the working ranch, stopping to visit points of interest that shed light on the life of LBJ, who, as vice president, assumed the country’s highest office after the November 22, 1963 assassination of President John F. Kennedy in Dallas. A big personality that dominated the news in turbulent times, Johnson could be crude and overbearing but also could turn on the charm. He was at his most gracious and fun-loving when entertaining visitors to his old stomping grounds.

The LBJ Ranch, near Stonewall, comprises one unit of Lyndon B. Johnson National Historical Park. The park’s other district is in Johnson City, 14 miles to the east.

A logical place to start your LBJ odyssey, though, is at LBJ State Park and Historic Site, located just south of the ranch and less than a half-hour from Fredericksburg, a town that I used as my Hill Country base. Across the Pedernales River from the LBJ Ranch, the state park features a visitor center with LBJ exhibits and memorabilia, plus a living history farmstead that provides context to the future president’s formative years. Restored to the 1915-1918 era, the Sauer-Beckmann Living History Farm reflects the life of a typical Hill Country family when LBJ was growing up. Johnson and his neighbors lived without electricity and indoor plumbing, and most people did not own cars.

Visitors to the farm might see costumed interpreters spinning cotton, making biscuits, churning butter or working in the blacksmith shop. They’ll encounter chickens, hogs, buffalo and longhorn cattle. One nature trail leads to a bronze statue of Johnson overlooking the Pedernales. Groups can make reservations for the state park’s riverside picnic area or dining hall. The visitor center provides motorists with a driving tour permit and route map for the neighboring LBJ Ranch.

LBJ acquired a lifelong passion for learning from his mother, Rebekah Baines Johnson, who was college-educated (unusual for a woman at the time). An information panel outside the school explains that Johnson returned there a half century later to sign into law one of the 20th century’s most important education bills—the Elementary and Secondary Education Act, which redefined the federal government’s relationship with America’s schools. At his side on April 11, 1965, was his first teacher, Miss Kate Deadrich, whom he had flown in from California. (More than 60 education-related bills became law under LBJ, whose Great Society programs ushered in an era of increased federal oversight.)

A quarter-mile from the school stands the LBJ Birthplace, a 1964 reconstruction of the small white farmhouse where Johnson was born in 1908. Across the road, in the Johnson family cemetery, the simple red-granite gravestones of Lyndon and his wife, Lady Bird, lie under a canopy of live oaks. Not nearly as grandiose as some presidential tombs, their headstones are a bit bigger than and similar in style and color to those of others buried by them (including his parents, grandparents, brother and sisters).

LBJ’s marker is inscribed with a small presidential seal. Lady Bird’s bears a flower and the words “a gentle heroine for nature and mankind,” reflecting the outdoor beautification programs that marked her stint as first lady and the 30-plus years she lived in Texas after the death of her husband in 1973. She is particularly associated with wildflower preservation. Lucky is the springtime visitor who witnesses the fields of Hill Country carpeted with profusions of bluebonnets, paintbrushes and other colorful blooms.

Touring the ranch with the Rev. Billy Graham one day, LBJ told the renowned Christian evangelist that Graham would return to deliver the eulogy at his funeral. Indeed, at the burial service, the pastor spoke these words: “Here amidst these familiar hills and under these expansive skies and under these beautiful oak trees that he loved so much, his earthly life has come full circle…his roots were deep right here on this spot in the hill country.”

An active cemetery, the stonewall-surrounded plot is still owned by the family and will be the final resting place for the Johnson daughters, Lynda Bird and Luci Baines, and their families. Said park ranger Cynthia Dorminey, “There actually is a map of all the available slots, and Lynda and Luci and their families have all gone through and decided who will be where….”

After the cemetery, the next stops are the home of LBJ’s grandparents and the Show Barn, where visitors can mingle with animals and learn about the ranch’s Hereford cattle, which are descended from the president’s original herd.

The centerpiece of the ranch is the Texas White House, where a mat at the front door once proclaimed: “All the World is Welcome Here.” During his five years as president, LBJ made 74 trips from Washington, D.C., to his Hill Country refuge. At a time of social upheavals and war in Vietnam, it became for Johnson a healing place far removed from the Nation’s Capital. Sophisticated technology, including 72 phones at his disposal, made it possible for him to always be in touch with the outside world; he spent 25 percent of his time in office there. Lady Bird, who lived in Austin after Lyndon’s death, would come to the ranch on weekends and holidays. She died in 2007.

The Johnsons bought the ranch house from Lyndon’s aunt in 1951. Set on a rock foundation dating to 1894, it was called the “Big House on the River” when she owned it. LBJ and Lady Bird had an outdoor swimming pool installed in 1955. They enlarged their showplace by adding an office in 1959 and then huge his and hers master suites. Restored to its 1972 appearance, the Texas White House has eight bedrooms and nine baths. Some of the pieces inside still belong to the family and are on loan to the National Park Service.

Daughter Luci, who lives in Austin, comes out to make decisions on the interior renovation of the home, which is currently closed for structural repairs. But visitors can tour the grounds and see the big oak tree under which Johnson held meetings with legislators, cabinet secretaries, celebrities and heads of state. LBJ himself would pick them up from the ranch’s airstrip and whisk them to the Texas White House in a golf cart. He enjoyed driving guests over the river’s low-water crossing, and “it was pretty standard to have a huge barbecue out along the river banks with country western music and mariachi bands,” ranger Dorminey said.

Famous guests included West German Chancellors Konrad Adenauer and Ludwig Erhard, Secretary of Defense Robert McNamara, Secretary of State Dean Rusk, Vice President Hubert Humphrey and General William Westmoreland, to drop a few names. JFK came out just before the inauguration and in November 1963 was supposed to visit the ranch with Mrs. Kennedy after events with Johnson in Dallas and Austin.

“The Kennedys were going to stay in the two big guest suites upstairs,” said Dorminey. “Then there was going to be a big barbecue out here along the river the next day…Everybody was getting ready for a big party when they found out about the assassination. Of course, things changed forever in the country and here at the ranch, obviously.”

Exhibits and Artifacts Provide a Look Back

Free tickets to tour the Texas White House grounds are available at the Airplane Hangar Visitor Center. Adjacent to the former hangar is a Lockheed JetStar, one of five JetStar aircraft used during the White House years. Owing to its small size, Johnson jokingly referred to the jet as “Air Force One-Half.”

Exhibits in the visitor center and nearby Klein Shop (once a maintenance shop) highlight the Johnsons’ life in Washington and at the ranch. Visitors can hear excerpts of phone calls that LBJ made to Billy Graham and Martin Luther King Jr. Some will find the exhibits on Lady Bird and the Space Race of special interest. The 14-minute film Our Heart’s Home plays three times each hour.

The Klein Shop houses some of LBJ’s favorite cars, including the blue 1962 Amphicar, a West German-made amphibious automobile. He loved the gadgetry and novelty of the car that could serve as a boat. Taking unsuspecting “victims” for a ride around Granite Shoals, Texas (40 miles northeast of the ranch), he would careen off the road and toward the water, shouting “the brakes don’t work, we’re going in, we’re going under.” Also on display is a Lincoln Continental convertible purchased from Roy Butler, an Austin car dealer.

“President Johnson was a real car enthusiast,” Butler recalled. “I made sure he had the first new model Lincoln convertible in central Texas each year, always white with a tan leather interior.”

The national park’s Johnson City district has a visitor center with exhibits and two films but currently is closed. Within walking distance are the LBJ Boyhood Home (also closed except for the grounds) and Johnson Settlement, a collection of restored 1800s buildings that recall his frontier heritage. Johnson City is named for James Polk Johnson, a forebear of LBJ’s.

While in the area, fans of 20th century history may also want to visit the National Museum of the Pacific War in downtown Fredericksburg. A Smithsonian affiliate, it provides the nation’s most comprehensive account of World War II in the Asiatic-Pacific theater.

The life and times of another U.S. president, Warren G. Harding, is chronicled at a new museum in Marion, Ohio. See Randy Mink’s article at https://leisuregrouptravel.com/ohio-town-honors-famous-resident-with-impressive-new-museum/.

Check out other Ohio presidential sites at https://leisuregrouptravel.com/hail-to-the-chiefs/.