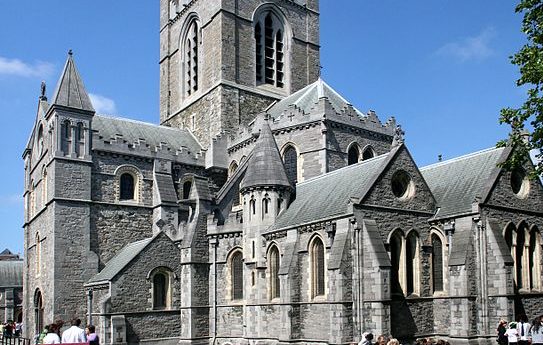 Ireland is full of religious attractions that shed light on both the religious heritage of its people and the rest of Europe. Here are nine places that highlight the spiritual fabric of the Emerald Isle:

Armagh flourished as the religious capital of Northern Ireland when St. Patrick established his church there in the 400s A.D. Many educational institutions sprouted as a result, and soon Armagh became among the most respected Irish cities. St. Patrick’s Roman Catholic Cathedral and St. Patrick’s Anglican Cathedral serve as main points of interest for tourists. Near the cathedrals is St. Patrick’s Trian, which has exhibits on city history and St. Patrick’s writings

St. Patrick’s Cathedral, the largest church in Ireland, stands adjacent to the site of the holy well where it’s said that St. Patrick baptized converts around 450 A.D. The English Gothic-style cathedral, built in the 1200s and refurbished in the 1870s, is lined with statues and has the tomb of writer Jonathan Swift (author of Gulliver’s Travels), who served as the dean of St. Patrick’s from 1713-1747. St. Patrick’s an Anglican church, boasts Ireland’s largest organ and a 140-foot spire that shadows over the stone walls.

Built by Norman-Anglo conquerors and restored during the Victorian age, Christ Church was viewed as the British establishment church for much of Dublin’s history. The crypt, Dublin’s oldest surviving structure, dates back to the 12th century. It contains the Treasures of Christ Church exhibition, with artifacts from when James II worshipped there in 1689. The tomb of Strongbow, a Norman baron who conquered Dublin in the early 12th century, is located in the south aisle of the nave, with an impressive effigy of a knight in armor.

Widely recognized as Ireland’s oldest and most famous college, Trinity boasts The Long Room, which houses Ireland’s largest collection of books and manuscripts. Its most notable text is the Book of Kells, a lavishly illuminated manuscript of the Christian Gospels and one of the oldest books in the world. The bell tower serves as the symbolic heart of the college, and the campus is open to visitors who want to walk in the steps of famous alumni, such as Oscar Wilde, Jonathan Swift and Samuel Beckett.

St. Audeon’s Church, built between 1181-1212, is the oldest parish church in Dublin possessing its original features. St. Anne’s Chapel, Seagrave Monument and Portlester Tomb are a few of the sites that can be viewed. Many memorials of past Dublin families have survived the years and serve as artistic reminders of Ireland’s history. The church was dedicated to St. Audeon, the seventh century bishop of Rouen and patron saint of Normandy

This church was originally built to serve the Viking population expelled from within the city walls. St. Michan’s was built on the site of a Danish chapel in the 11th century and now belongs to the Protestant Church of Ireland. The interior is noted for its woodwork and large organ built in 1724. A highlight is the burial vault underneath the church. Because of atmospheric conditions in the vault, century-old bodies remain intact, and some of the coffins lie open for visitors.

This cathedral and Round Tower have been part of the religious heritage of Ireland for over 800 years. Monuments dedicated to Bishop David and prior owners of the Kilkenny castle in the cathedral serve as reminders of the town’s ancient history. Outside are tombstones unique to St. Canice’s and Kilkenny. The Round Tower is the oldest standing structure in Kilkenny, and tourists enjoy climbing it to capture great views of the city.

Ennis Friary is a 13th century Franciscan friary that was home to over 300 friars and 6oo students. The carving of St. Francis, the MacMahon tomb and scenes from the passion of the Christ are highlights. Years ago, the Friary was one of the centers for education in Europe and the city of Ennis developed around it. Although Ennis Friary is a ruin, it is open to visitors.

Visitors can see a major Roman Catholic pilgrimage site in the village of Knock, where there was a reported apparition of Virgin Mary, Jesus Christ, St. Joseph and John the Evangelist in 1879. The shrine has numerous attractions, such as a church that contains statues depicting the apparitions, fountains of holy water and the sacred stones.The Knock Shrine attracts 1.5 million visitors annually, making it Western Ireland’s most popular attraction.

While traveling through Ireland, visit this cathedral situated in the heart of Cork, where St. Finbarre is said to have established his monastic school in the seventh century. The Neo-Gothic cathedral is made from Cork limestone and marble as well as Bath stone. Stained-glass windows, marble mosaics and sculptures portray scenes from the Old and New Testaments.