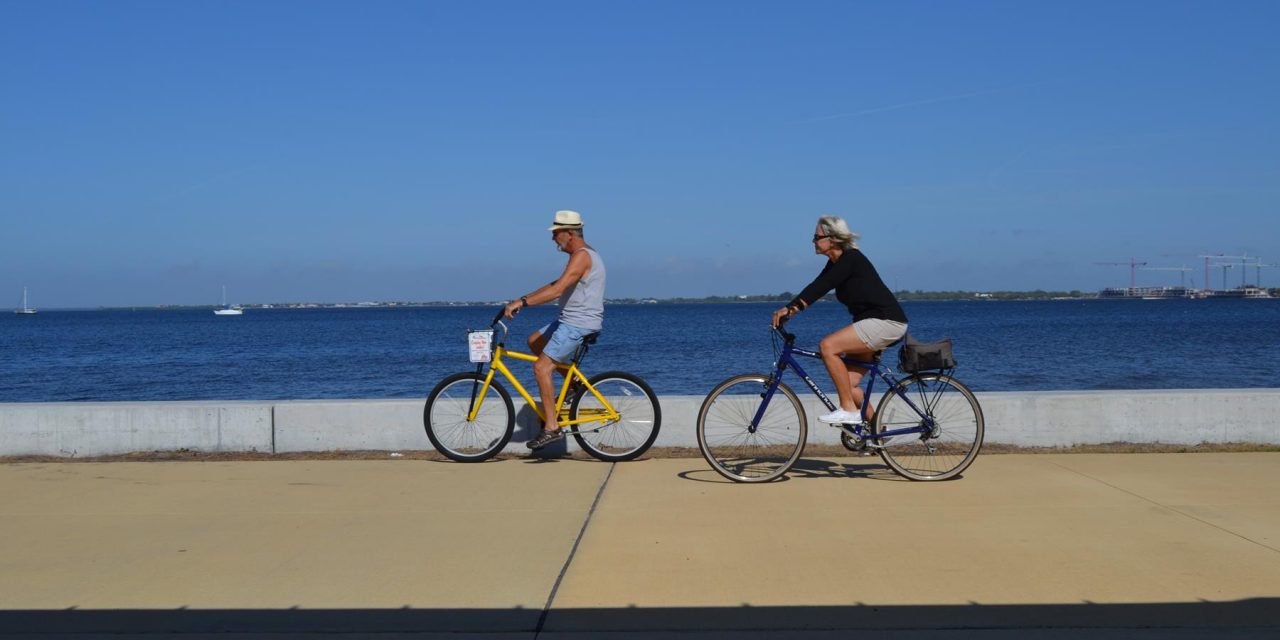 Planning a group tour or meeting in Florida? While there are numerous Sunshine State locations to choose from, you may want to investigate Punta Gorda, a waterfront beauty on the Gulf of Mexico.

A good first stop is Englewood Beach Park on Manasota Key, a few miles from the city limits, and one of the reasons they say Punta Gorda’s best side is outside. It’s there you may find The Beach Guy, Mark Timchula, who will offer up the many benefits of your group visiting “his” beach and Punta Gorda. 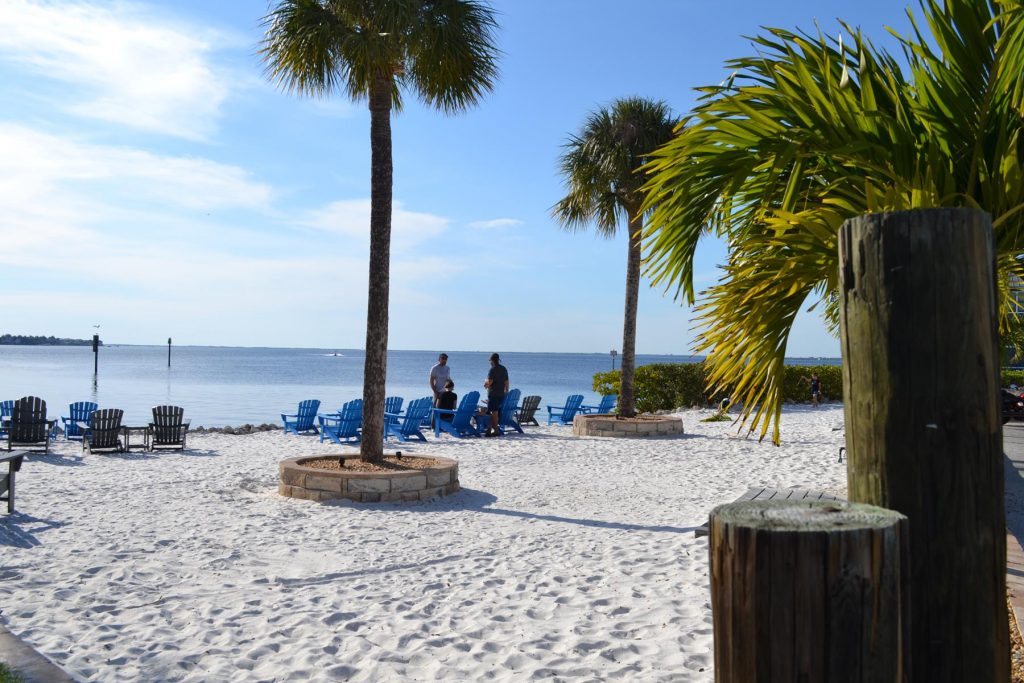 As he pulls up a comfortable beach chair, Timchula says, “Englewood is not as built up as other places around Florida, and that’s what gives us the small-town feel. This area is more like Old Florida used to be.” Parking is still only 75 cents an hour at the beach.

The view from Englewood Beach is spectacular, featuring powdery white sand, thousands of seashells and unique fossilized shark’s teeth. It’s just one of several beaches in the area that attract groups looking for fresh sights and recreational opportunities.

Your group can also investigate nearby Gasparilla Island State Park with its two historic lighthouses and Port Charlotte Beach Park, which has boat ramps, grills, picnic tables and a fishing pier. Nearby waters known as the Tarpon Fishing Capital of the World host three tarpon fishing tournaments during the year. Charlotte Harbor, with 219 miles of shoreline, is an important nursery area for baby sharks.

The Myakka River, about 50 miles north of Punta Gorda, flows through 58 square miles of unspoiled wetlands, prairies, hammocks and pinelands in Myakka River State Park, one of Florida’s oldest and largest parks. Boating, fishing, canoeing and kayaking are popular activities, while hikers and bicyclists can explore miles of trails and backroads. There are also wildlife tours, a canopy walkway and a bird walk. 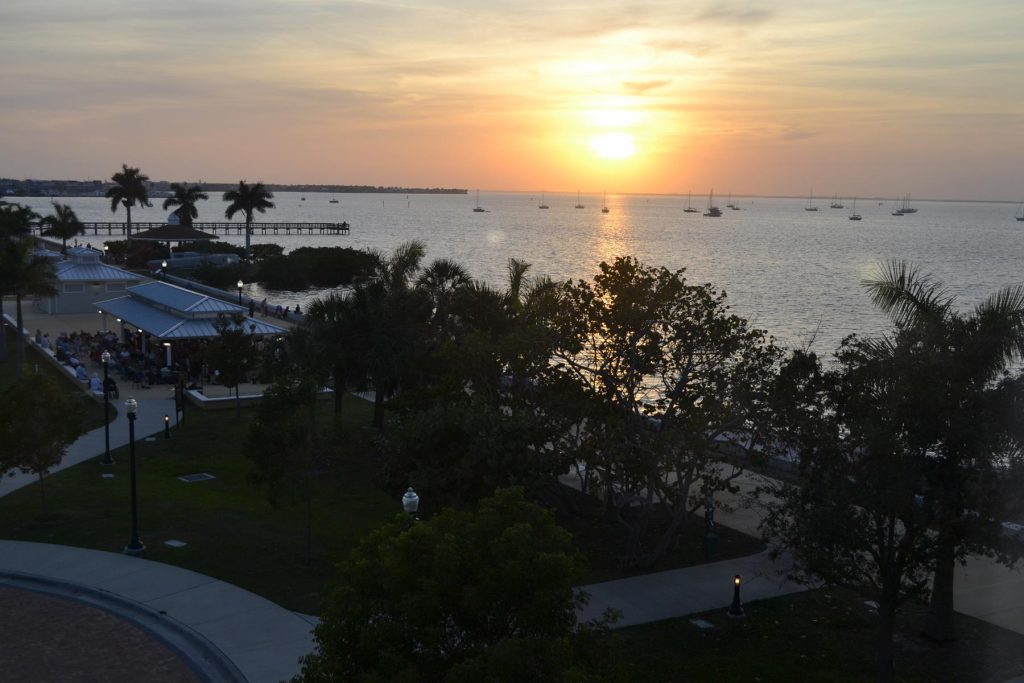 Beyond the beaches and parks, but still on the water, Fishermen’s Village tends to be the hub of tourist activity for the city of Punta Gorda, which was first placed on a U.S. map in 1851. Kathy Burnam, marketing manager for Fisherman’s Village, says the village incorporates waterfront dining with a variety of restaurants, boutiques and specialty shops, a secure protected marina with more than 100 boat slips, and newly remodeled furnished vacation villas with fully equipped kitchens and balconies overlooking the harbor.

From Fisherman’s Village your group can take a 90-minute sunset cruise on the King Fisher Fleet out of Charlotte Harbor or a 2½ -hour narrated cruise to the Charlotte Harbor Aquatic Preserve with a lunch stop at historic Cabbage Key Inn, home of mystery writer Mary Roberts Rinehart. Other King Fisher cruises include trips to Cayo Costa State Park and seasonal trips to Boca Grande and Burnt Store Marina.

Local companies like Beach Road Watersports offer everything from power boat, pontoon, kayak and paddleboard rentals, to waverunners that can accommodate up to three people. Snorkeling, dolphin tours and customized water tours through the mangroves are offered by local firms.

Bird-watching is a popular pastime in Punta Gorda, with egrets, American oystercatchers, sandhill cranes, roseate spoonbills and storks in abundance. For a swamp adventure, plan a half-day trip to Babcock Ranch Preserve. Once part of the Crescent B Ranch, the 67,600-acre preserve a few miles out of town is the largest state conservation acquisition in Florida. Recreational opportunities there abound, including hunting, hiking, wildlife viewing, bicycling, fishing, camping and horseback riding. Within the preserve you can see birds, white-tailed deer, wild turkeys, bobcats, tortoises, owls, snakes, wild hogs and alligators.

A highlight of the preserve is a 90-minute educational swamp tour on a school bus that winds its way through the freshwater wetlands of Telegraph Swamp and the operations of a traditional Florida cattle ranch. You are almost guaranteed to see a number of wild swamp creatures. Groups can also take a tour of the swamp at night to hear the sounds of owls, frogs and alligators. 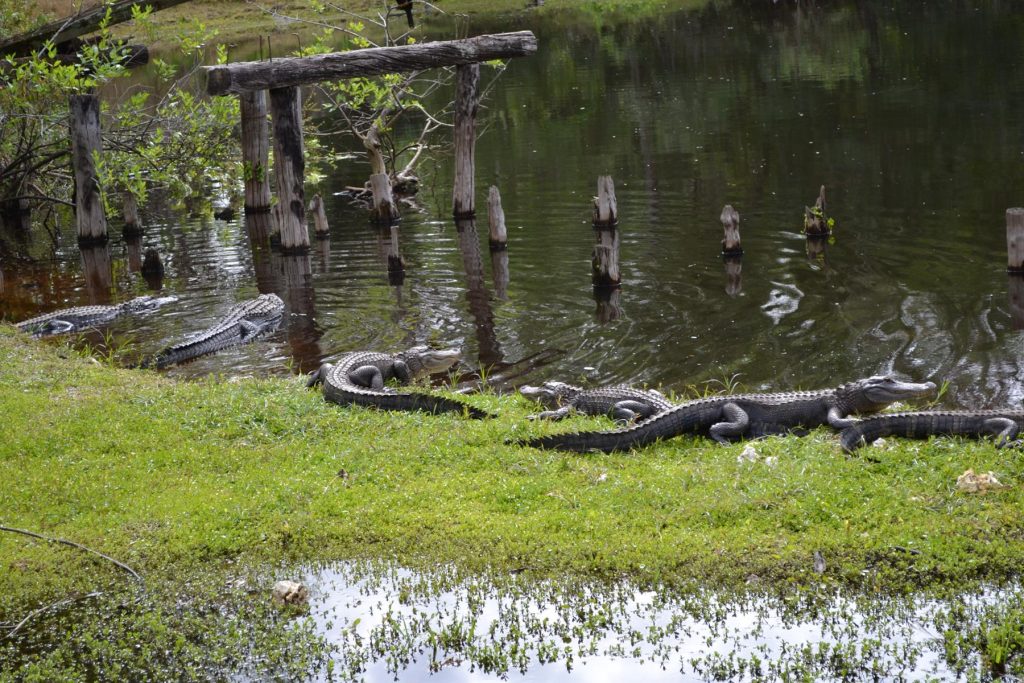 Visitors at Telegraph Swamp can see alligators and a variety of other creatures.

Several miles away is 18,000-acre Babcock Ranch, America’s first polar-powered, green-infrastructure town, featuring 340,000 solar panels. Half of the town’s footprint is set aside as greenways, parks and lakes, providing recreation and scenic backdrops for neighborhoods and downtown Founder’s Square. Babcock Ranch is designed to eventually grow to 19,500 homes with nearly 50,000 residents. Groups can tour the Woodlea Hall Discovery Center in Founder’s Square and learn about the vision for the town and initiatives that shaped its development.

At the 30-acre waterfront Peace River Botanical and Sculpture Gardens, groups can learn about five ecosystems that include marshlands, wetlands, mangroves, uplands and tidal basins. Flowering trees and plants bloom year-round, and gardens display sculptures by internationally renowned artists from the United States, China and Turkey.

Rick Treworgy’s spacious Muscle Car Museum showcases as many as 200 shiny classic cars from the 1950s to the early 1970s. The museum features sporty Caminos, Camaros, Corvettes, GTOs, Oldsmobile 442s, SS Chevelles and more, from “muscle” cars to classic cars and hotrods to car memorabilia and a 1960s-style diner. Most of the cars are in pristine running condition, and the hot rods span a range of makes and models covering 80 years of automobile history. The museum also hosts “cruise-in” gatherings, popular events for car enthusiasts. 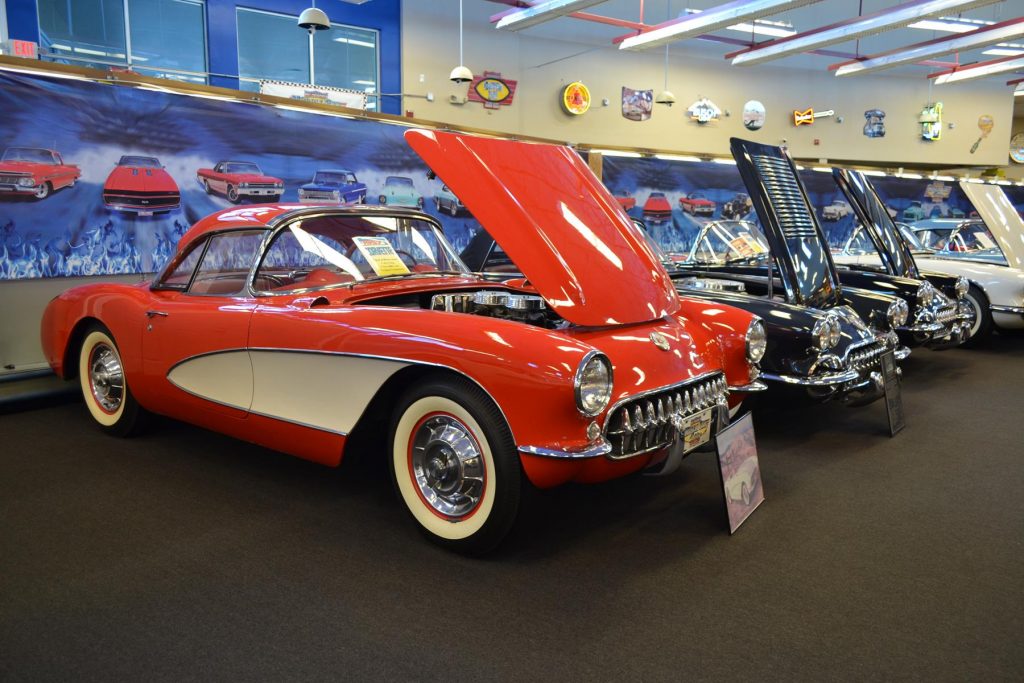 As many as 200 shiny classic muscle cars are featured at the Muscle Car Museum.

The 17,000-square-foot Military Heritage Museum is front and center in its new home in Punta Gorda, and has many interactive exhibits and programs portraying U.S. military history from pre-Revolutionary War days to current conflicts. Air Force Brigadier General Warfield Tibbets, Jr., famed pilot of the Enola Gay, the plane that dropped the first atomic bomb on Japan, served as the museum’s initial honorary chairman. 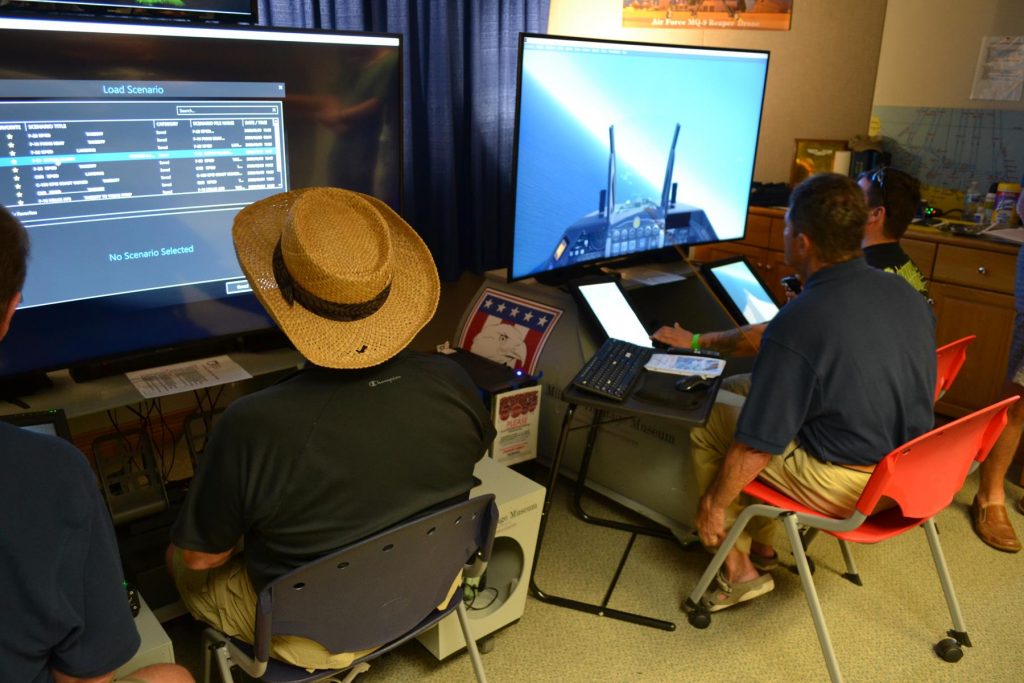 Interactive displays, tours led by veterans and a large 247-seat theater are highlights of the Military Heritage Museum.

Veterans lead tours and give visitors a unique perspective of key moments in history that cannot be obtained from a textbook. The museum features interactive programs utilizing flight simulators, VR technology and laser ranges, military exhibits from the various military branches, oral histories and a 247-seat theater where special programs and films are offered as well as an extensive military library.

Located on the shores of the Peace River, the Charlotte Harbor Event and Conference Center offers 44,000 square feet of event space, pristine panoramic waterfront views and food service management for any size group. The venue can host consumer expositions and trade shows, sports tournaments, regional and national conventions, and other gatherings. Another group venue is the Cultural Center of Charlotte County with a capacity of 1,500, and 90,000 square feet of space.

For an excellent meal with a bayside view, Laishley Crab House specializes in seafood, sushi, steaks and spirits. Visitors here say the sunsets from the indoor or outdoor dinner venues are spectacular.

With Old Florida charm, colorful year-round festivals and a multitude of ongoing activities to experience, this destination will appeal to groups of all kinds

For more information, go to www.pureflorida.com 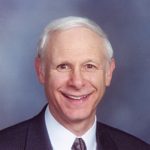 Photos by the author

Don Heimburger, with a journalism degree from the University of Illinois, is a well-versed travel writer and photographer who has reported on numerous domestic and European destinations for many years.