Poking Around Prague – Czech It Out 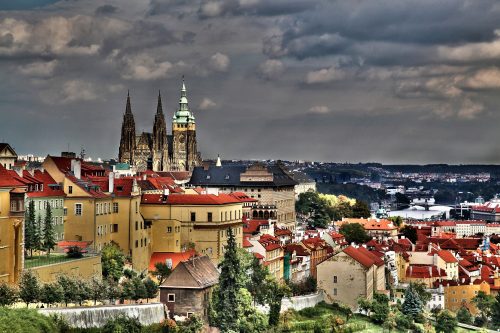 The Czech capital, with its well-preserved medieval heart, mirrors the best of the Old World.

For many of us who remember the drab, gray cities of the Soviet bloc, it’s hard to believe that Prague has blossomed into one of the most desirable destinations in Europe. In the 25 years since the Czech people ended four decades under the yoke of Communism, the country’s capital has become a different place—a lively, freedom-loving city thronged with tourists from around the world. As many tour operators lament, it’s almost too popular—the crowds can be overwhelming, especially during the peak summer season.

Prague has emerged as one of Europe’s most visited cities and always ranks among the top 10, not far down the list from perennial favorites London, Paris, Rome and Berlin. For many Americans, Prague serves as their introduction to Eastern Europe. Its location in the geographic heart of the continent makes it a winner with itinerary planners. Surrounding the Czech Republic are Poland, Germany, Slovakia and Austria.

Prague’s appeal stems from its Old World magic, a storybook charm that enchants those of us from the New World. With a skyline of red rooftops, spires and domes, it’s what the Europe­—in our imaginations at least—is supposed to look like. Luckily, the city was spared from bombings in the world wars, so the central core is pretty much intact. Thanks to better economic times that followed the fall of Communism in 1989, long-neglected facades have been spiffed up. In short, the new Prague, one of Europe’s most beautiful cities, is well preserved and tourist-friendly.

The best way to appreciate Prague is to get out, wander and soak up the ambience. Marvel at the melange of architectural styles, from Gothic and Renaissance to Baroque and Art Nouveau. Explore winding medieval lanes. Linger at an outdoor cafe and drink in the atmosphere. The checklist of can’t-miss sights is rather short, so the pressure is off. Happily for visitors, the old center is relatively compact and substantially traffic-free.

Old Town Square, at the heart of the action, is a good place to start. Expect a global street party from morning to night. A rousing cafe scene and clip-clopping horse carriages set the tone in what was the city’s market area as early as the 11th century. 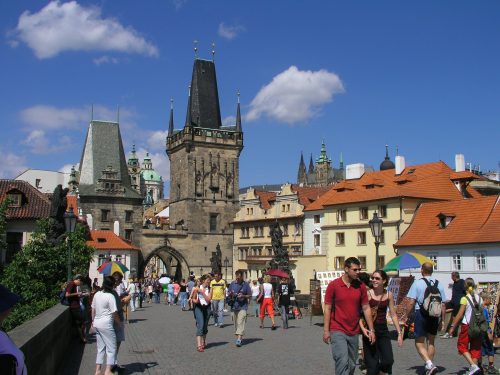 The square’s main attraction, and perhaps the city’s most famous sight, is the crowd-pleasing Astronomical Clock built into the facade of the 14th century Old Town Hall. It doesn’t tell time, but it does give the month, season, zodiac signs, course of the sun and Christian holidays. On the hour a skeleton appears and chimes the bell, followed by a parade of the 12 Apostles. For views of the square, climb or take the elevator to the top of the Town Hall. The square’s centerpiece is the memorial to Jan Hus, the Czech religious martyr who was burned at the stake as a heretic in 1415.

Prague’s Jewish Quarter, an easy walk from Old Town Square, holds the best collection of Jewish historical monuments in Europe, though the old ghetto (dating from medieval times) is only a fraction of its former self. Scattered over three blocks are several synagogues-turned-museums focused on Jewish life and religious customs. An exhibition in the 1535 Pinkas Synagogue remembers the 80,000 Czech and Moravian Jews who died in WWII concentration camps; their names are hand-written on the walls. The Old-New Synagogue, built in 1270, is the oldest synagogue in Eastern Europe. The quarter’s most memorable sight is the Old Jewish Cemetery, a jumble of 12,000 tombstones crammed into a small space—it’s actually 12 to 15 layers deep. Many of the buildings survived the Nazi regime because of Hitler’s perverse plan to create a museum dedicated to the vanished Jewish race. Today there are fewer than 2,000 Jews in Prague.

Some would say Charles Bridge is Prague’s top attraaction. Linking Old Town with the Lesser Quarter, it’s more than just a bridge, though. Lined with Baroque statues of saints and marked by towers at each end, the pedestrians-only span over the Vltava River bustles with vendors, musicians and tourists. The bridge is the perfect place to view the magical skyline, dominated on the west side by Prague Castle looming over the city and river. The palaces, courtyards, churches and streets comprise the largest castle complex in the world. Once the seat of kings and princes, Prague Castle is home today to the president of the Czech Republic. Be sure to stroll down the Golden Lane, where exhibits in tiny, recently restored houses depict the lives of castle guards and others who lived there from the 16th century to the 1950s. Some houses are souvenir shops with wooden toys, marionettes, jewelry and books relating to the lane’s most famous citizen—author Franz Kafka.

A visit to central Prague is not complete without walking around Wenceslas Square (named after the “good king” from the Christmas carol) in New Town. Actually a broad boulevard, it is the city’s commercial heart; the equestrian statue of the king is a common meeting place. Demonstrations during the 1969 Prague Spring uprising and 1989 Velvet Revolution took place there. The nearby Museum of Communism looks at everyday life under Russian rule.

The dynamic spirit pervading Prague today is reflected in the young people who speak English and are tuned in to Anglo-American culture. Combine the medieval monuments and fairy-tale flavor with the infectious buzz, and you’ve got one of the must-see cities in Eastern Europe.