Car culture and nostalgia set the tone in a new Chicago hotel wrapped in history.

Entering downtown Chicago’s newest Hampton Inn for the first time, it’s a “wow” moment for sure. There, showcased under lights on the mezzanine at the end of the soaring lobby, a 1928 Ford Model A coupe shines in all its antique glory.

The multi-million-dollar renovation of the former Chicago Motor Club building, a polished 1928 antique itself, has transformed the 17-story skyscraper into a jewel-like hotel that will enthrall auto buffs, Art Deco aficionados and anyone who likes to bed down in a place with a little history going for it. 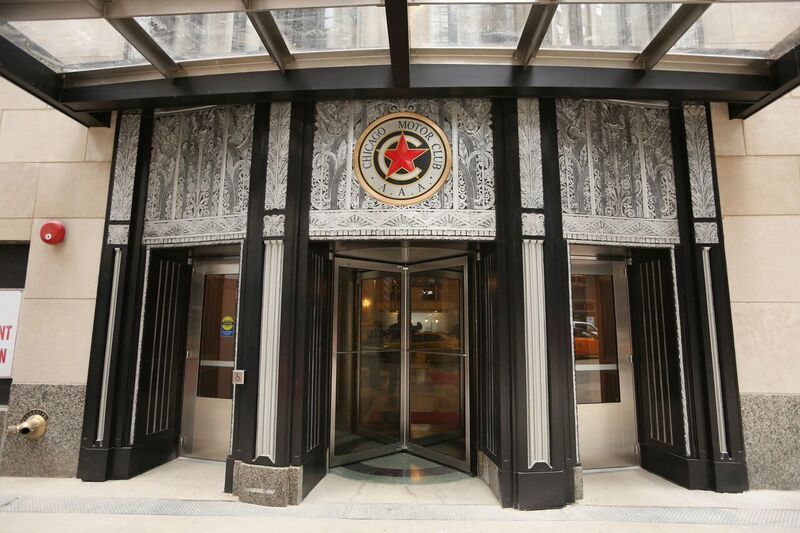 I recall going into the Motor Club building in the early 1980s to get travelers checks, maps and TripTiks, those point-to-point travel planners that AAA (American Automobile Association) customizes for clients’ driving trips. When the club moved its headquarters to the suburbs in 1986, the building was renamed Wacker Tower and was operated as rental office space for 10 years until a developer purchased it with plans for condominiums. Those plans didn’t materialize, and the building sat empty from 2004 until 2014, when renovations for the hotel started. The Hampton Inn Chicago Downtown/North Loop/Michigan Avenue—what a mouthful—opened in May 2015, giving the architectural gem a new lease on life.

Hotel guests can soak in the yesteryear aura by spending time in the 33-foot-high lobby, perhaps over a cocktail at the bar or make-it-yourself waffles at the Hampton Inn’s free, hot breakfast, a standard amenity across the mid-priced brand. Aside from admiring the Ford Model A, they are awed by the lobby’s main attraction—a giant mural of the United States depicting the major national highways in 1928. Stretching high and wide above the bank of elevators, the restored mural dominates the lobby’s western wall. 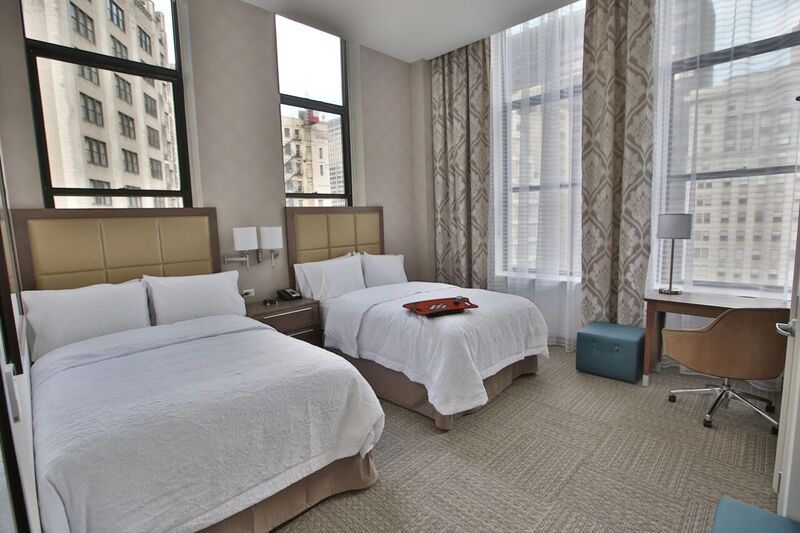 For a sweeping view of the lobby and its treasures, walk up to the mezzanine above the hotel entrance, opposite the mezzanine with the Model A. It’s also a good place to examine the classic Art Deco ornamentation—silvery geometric, floral and swan motifs employed on the trim (and found on the elevators and grilles as well). The mezzanine balconies, both backed by tall windows, sport the original Chicago Motor Club shield, another version of which adorns the building’s exterior, right above the revolving door. Parts of the lobby’s terrazzo floor and some of the ceiling lights also have been restored. The mail chute extending the height of the lobby also recalls the past.

Though not as noticeable or grand as other historic skyscrapers in the city, the building at 68 E. Wacker Place – designed by the renowned architectural firm of Holabird & Root – boasts “one of the finest Art Deco interior spaces in Chicago,” according to the Chicago Landmarks Commission. When it opened for business on Jan. 28, 1929 – after being completed in 265 days in 1928 – the Chicago Daily Tribune called it “a temple of transport.”

In Jack’s Place, the lobby lounge, you can examine the map’s ribbons of roadway that predated the interstate highway system – roads like the Lincoln and Dixie highways. The walls on either side of the bar have the original lighted signs – Eastern Routes, Western Routes, Southern Routes, Local Routes – that identified the help desks staffed by Motor Club personnel. I enjoyed a Chicago craft brew at the bar, frequently getting up from my seat to check out the map and Art Deco details. The signature cocktail at Jack’s Place is Giggle Water, a concoction of rum, gin, bourbon, simple syrup, parsley, tonic water and lime juice. Fashioned after a drink served during Prohibition, it gets you in the Roaring 20s mood. 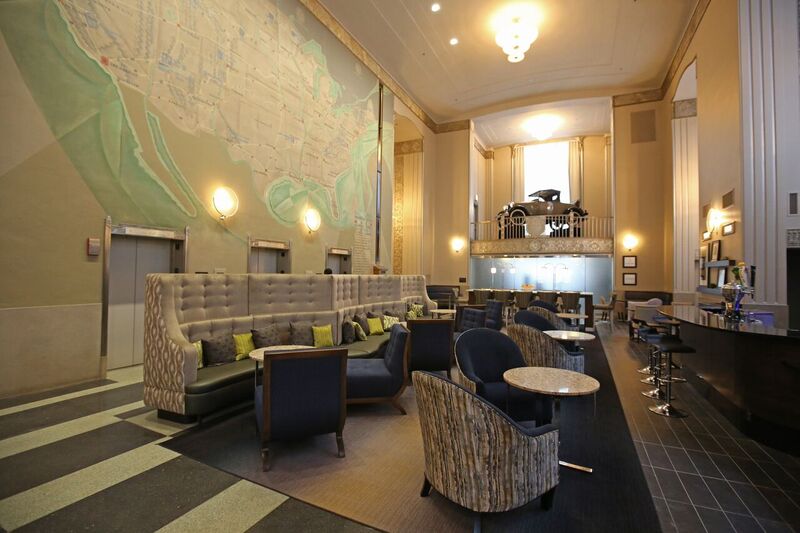 A vintage mural map of the United States, along with a 1928 Ford Model A, give the Hampton Inn lobby a yesteryear feel. (Kenny Kim Photography)

Hotel guest rooms feature complimentary WiFi, a 42-inch flat-screen HDTV, an ergonomic desk and a coffeemaker. The LEED-certified hotel offers a 24-hour fitness center and a 24-hour business center with computers for guest use.

The Hampton Inn, just a block from the Chicago River and steps from North Michigan Avenue, is within easy walking distance of stores, restaurants and theaters in the Loop, Chicago’s central business district. Lakefront parks also are nearby, as are the fashionable shops of the Magnificent Mile corridor.