Squeaky clean and ever so green, the cultural and political center of Norway provides a window on contemporary Scandinavia and peeks into the country’s maritime past.

Backed by verdant hills and fronting the head of an island-dotted fjord, Oslo commands an idyllic setting that contrasts dramatically with the geography of other European capitals. They call it “the blue, the green and the city in between.”

From the harborfront on a clear day, you can view one of the world’s most famous ski jumps. A city that cherishes its closeness to nature, Oslo boasts ski slopes and hiking trails just minutes from downtown via public transportation.

Two-thirds of the city is covered by forests and lakes. Parks, greenbelts and wide boulevards contribute to the sense of elbow room. Population-wise, Oslo is among the smaller European capitals (600,000) but ranks near the top in terms of area.

What Oslo lacks in signature sights or Old World magic is made up for by some of Northern Europe’s best museums and a cutting-edge cultural scene that has become the envy of Scandinavia. Fueled by money from North Sea oil reserves, Norway is a prosperous country of five million citizens, and in the last decade its cosmopolitan capital has emerged as a trend-setter in cuisine, design, and art and architecture.

There’s a distinct aura of well-being in this metropolitan area that is home to one in five Norwegians, and everything seems to be under control. That applies to personal health as well. Casual observations confirm that not only are people are fit and trim, but many of the “Nordic goddesses” could have stepped from the pages of a fashion magazine. 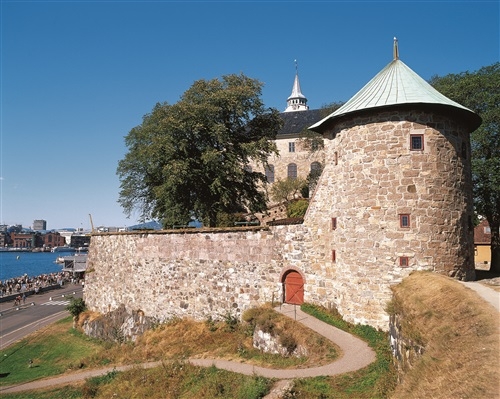 The harborfront Akerhus Castle , the most historic chunk of real estate in town, makes a good place to begin exploring Oslo. Even if you don’t go inside, you can wander the hilltop fortress and take in glorious panoramas from the cannon-studded ramparts. Scan the green horizon and you’ll spot Holmenkollen Ski Jump perched triumphantly above the city.

Anyone with an interest in World War II history will make a beeline to the Norwegian Resistance Museum on the castle grounds. Exhibits and film clips tell the story of how Norway endured five years of Nazi occupation. The chronological journey covers the German invasion in 1940, King Haakon’s exile in England and America, everyday life during occupation, and liberation in 1945. Learn about Vidkun Quisling, the traitorous Norwegian fascist leader who collaborated with the Germans, and how heroic members of the underground undermined Nazi rule and kept the country’s spirit alive. Many patriots were executed right outside the museum’s front door. Some 9,000 Norwegians were deported, and about 1,400 (half of them Jews) never returned. 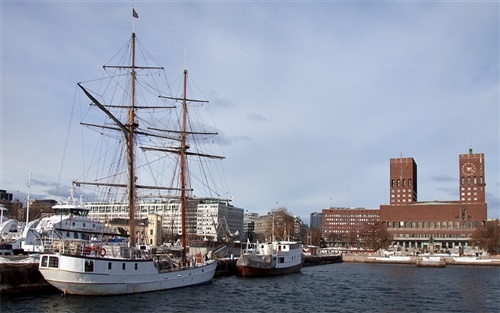 The brown-brick City Hall also dominates the inlet where most cruise ships anchor and merits a peek inside for its artwork, ornately furnished function rooms, and the jaw-dropping dimensions of the cavernous hall where the Nobel Peace Prize ceremony is held every Dec. 10. Larger-than-life murals depict Norwegian culture and history, including the WWII experience. A Nobel photo exhibit shows President Obama accepting the award in 2009.

Several souvenir stores lie just steps from City Hall. The best is Audhild Viken, a “department store” offering everything from Viking ship models, troll figurines, moose trinkets, and reindeer hides to sweaters and scarves in Nordic designs. Downstairs is all Christmas. (Shoppers beware: most things in affluent, highly-taxed Norway cost about double what they would at home.)

From City Hall, follow the quayside and you’re at the Nobel Peace Center, a high-tech museum that recognizes Alfred Nobel, the Swedish founder of the awards, and the 86 men, 15 women and 21 organizations that have received the prestigious prize since 1901. Housed in a renovated train station, the museum has touch-screen displays recognizing such humanitarians as Mother Teresa and Dr. Albert Schweitzer, and political leaders like Mikhail Gorbachev, Lech Walesa and Jimmy Carter. (Only the Peace Prize winner, chosen by a committee of Norwegians appointed by the Parliament, is honored in Oslo; other Nobel laureates receive their prize every October in Stockholm.)

Continue along the waterfront to Aker Brygge, a pedestrian-friendly, steel-and-glass development that arose from a former shipyard across the inlet from the castle. Upscale cafes, restaurants, shops, art/design galleries and townhouses make it a place to be seen.

The latest buzz, though, revolves around the swanky, newer Tjuvholmen district, attached to Aker Brygge on the outermost point of land stretching into the fjord and the new home of the Astrup Fearnley Museum. The daring, three-building museum complex, clad in gray timber and crowned with a curving glass roof, was designed by world-renowned architect Renzo Piano—and presents equally daring contemporary art. 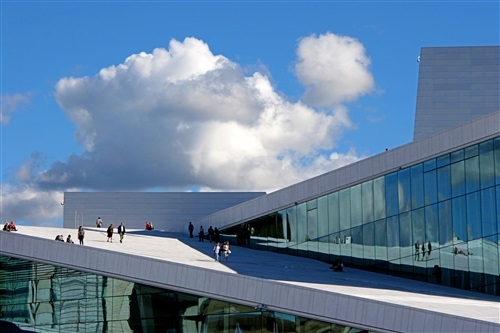 The waterside Opera House, a striking piece of architecture that made its debut in 2008, has transformed Oslo’s eastern harbor. Located across the road from the central train station, the marble-and-glass stunner resembles a glacier sliding into the sea. Tourists climb its gently sloping roofs to peer into the oak interior and check out the skyline from various vantage points; many sprawl out and soak up the sun. 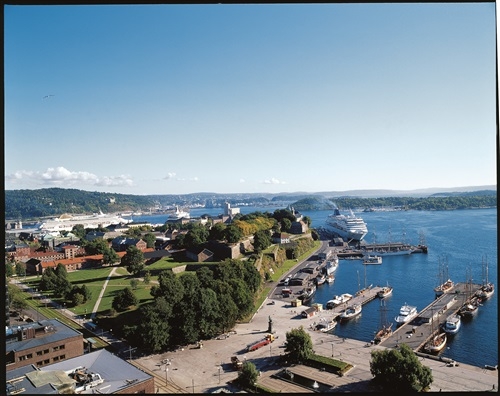 Karl Johans Gate, the city’s main thoroughfare, sweeps regally from the Royal Palace to the Parliament Building and train station. Here in the heart of the city, a 15-minute walk from the harbor, you have smart stores and outdoor cafes, the National Theatre, and historic Grand Hotel, where Nobel Peace prize winners stay in the Nobel Suite. A block off the boulevard is the National Gallery, a treasure chest of Norwegian and other European art from the early 1800s to 1950. The Scream by Edvard Munch (1863-1944), Norway’s most famous artist and a pioneer of expressionism, tops its must-see list. Oslo’s Munch Museum claims the world’s largest collection of his art, including versions of The Scream. 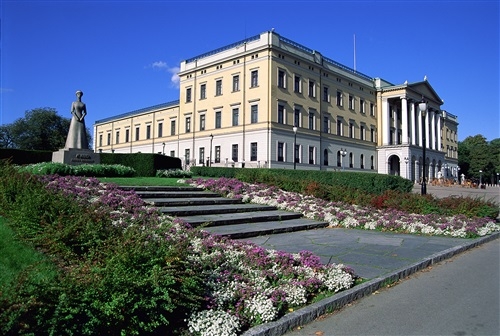 The Royal Palace offers tours in summer, but most visitors are content to take photos from the outside and watch the changing of the guard. Nearby, fans of playwright Henrik Ibsen (A Doll’s House, Hedda Gabler, Peer Gynt) can pay homage at the Ibsen House, his apartment from 1895 until his death in 1906. 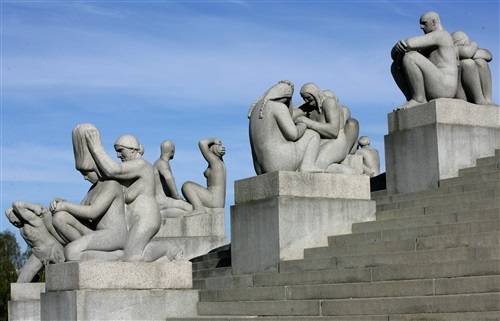 A mile west of the palace grounds, Vigeland Sculpture Park, showcases 200 works of Norway’s most illustrious sculptor, Gustav Vigeland. Spread across nearly 80 acres, the monumental nudes in stone, iron and bronze were arranged by the sculptor himself.

Homenkollen Ski Jump affords 360-degree views of the city, hinterlands and Oslo Fjord. A venue in the 1952 Winter Olympics, the tower was rebuilt in 2011 for the World Ski Jump Championship. See the world’s oldest ski museum or take part in a virtual downhill race on the ski simulator, a terrifying five-minute ride. 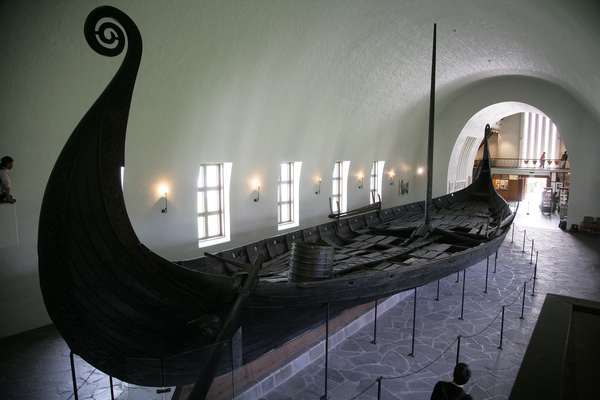 Clustered together at one tip of the peninsula are the Fram Museum, Kon Tiki Museum and Norwegian Maritime Museum. The waterfront A-frame building houses the polar ship Fram, which served Norwegian explorers in both the Arctic and Antarctica. Fridtjof Nansen had it built in the 1890s for an expedition that came within a few degrees of the North Pole, and in 1911 the ship made history when Roald Amundsen and crew became the first to reach the South Pole. Films about the treacherous voyages, a frightful walk through a polar simulator and a 20-minute Northern Lights show enhance the visitor experience.

Nautical feats of another 20th century Norwegian, anthropologist Thor Heyerdahl, are remembered next door at the Kon Tiki Museum. On display is the Kon Tiki, the balsa wood raft that he and his crew sailed from Peru to Polynesia in 1947. Heyderdahl’s 4,300-mile journey purportedly spawned the 1950s’ “tiki” craze.