Old Montreal: A Slice of Europe in North America 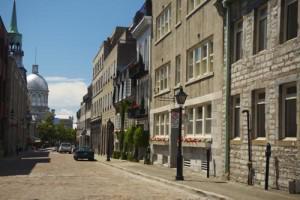 Take a step back in time along the cobbled streets of  Old Montreal.  (Photos courtesy Tourisme Montreal)

The French connection dates from 1642, when a group of French Catholics founded the village of Ville Marie as a Christian community on an island where the St. Lawrence meets the Ottawa River. The quarter’s oldest street, rue St-Paul, began as a mere path in 1672. A stretch of it is pedestrian-only from May through September. The Hotel Nelligan, where I stayed for three nights, fronts this street, which became my point of reference as I explored the old city on foot.

Montreal blossomed into one of New France’s most prosperous fur-trading towns, with a bustling port occupying the St. Lawrence shoreline in what is now called Old Montreal, or Vieux-Montreal. From its glory days in the 1800s, the port had declined by the early 20th century and was hardly considered a place to visit. Until the district’s renaissance in the 1980s, concrete walls and storage silos had divided the city from the water, and warehouses sat abandoned.

Today the district thrives with not only tourists but locals who have taken up residence amid the historic environs. Height and style restrictions are in place to preserve Old Montreal’s character. The cobblestone streets, by the way, are not original but date from city improvements made for Expo ’67. 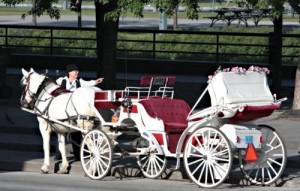 Enjoy a clip-clopping ride on a horse-drawn caleche.

The riverfront, no longer a working port, now is a park-like promenade with tree-shaded picnic tables and steady streams of joggers, bikers and inline skaters. Tourists head to the waterfront to rent paddleboats, take sightseeing and dinner cruises, and visit Pointe-a-Calliere Archeological Museum, where an underground tour showcases excavated ruins and early water systems. A clip-clopping ride on a horse-drawn caleche provides a romantic sightseeing option.

At certain times of the year you’ll see Holland America and other big passenger ships docked at the pier as Montreal is a turnaround port on New England-Canada cruises from New York and Boston.

A pile of french fries drenched in gravy and mixed with gooey cheese curds may not sound that appetizing, but I had to try this Quebec specialty (poutine) on my first day in Old Montreal. A place called Montreal Poutine, on rue St-Paul, had just what I was looking for. I added bacon to my poutine. You can also order the vegetarian version (just cheese and gravy with fries) or add other ingredients, like chicken, Italian sausage, or mushrooms and onions. Or have it with smoked meat, a Montreal specialty that’s similar to pastrami or corned beef.

Just down the street I encountered one of Quebec’s most celebrated products—pure maple syrup. A fan of the real stuff, I was in heaven as I browsed the Canadian Maple Delights store and enjoyed free samples of various grades of syrup and other maple treats. At the bakery counter I bought a maple date bar and maple brownie, then ate them at a window table overlooking rue St-Paul. I came back a day later to pick up some treats for the airport and flight home, choosing a maple almond croissant, maple sugar crunch-top muffin and maple spread shortbread cookie. 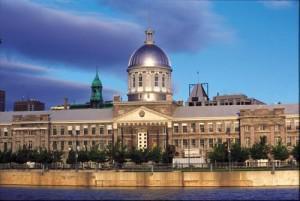 Walking along rue St-Paul, it’s hard not to stop at every bistro and read the menu (written in French and English). With visions of past trips to Paris in mind, I was tempted by the crepes and croque monsieurs (grilled ham and cheese sandwich). Penny-pinchers will want to take note of the table d’hote menus that offer three or four courses for one low price.

Rue St-Paul crosses Place Jacques-Cartier, a big open square that slopes toward the river. Restaurants with outdoor seating provide views of the people parade, and street performers entertain the crowds. After dinner one night, I watched a comedian who did tricks with flaming torches. Caricature and portrait artists add to the festive scene.

Another Old Montreal focal point is Marché Bonsecours, a silver-domed, neo-classical building dating from the mid-1800s. Reminiscent of Boston’s Quincy Market, it served for a century as the city’s main public market (and City Hall from 1852 to 1878). Today it houses boutiques featuring the wares of top Quebec designers and artisans, plus cafe-restaurants with patio dining.