Off the Cattle Trail and into the Wild Blue Yonder 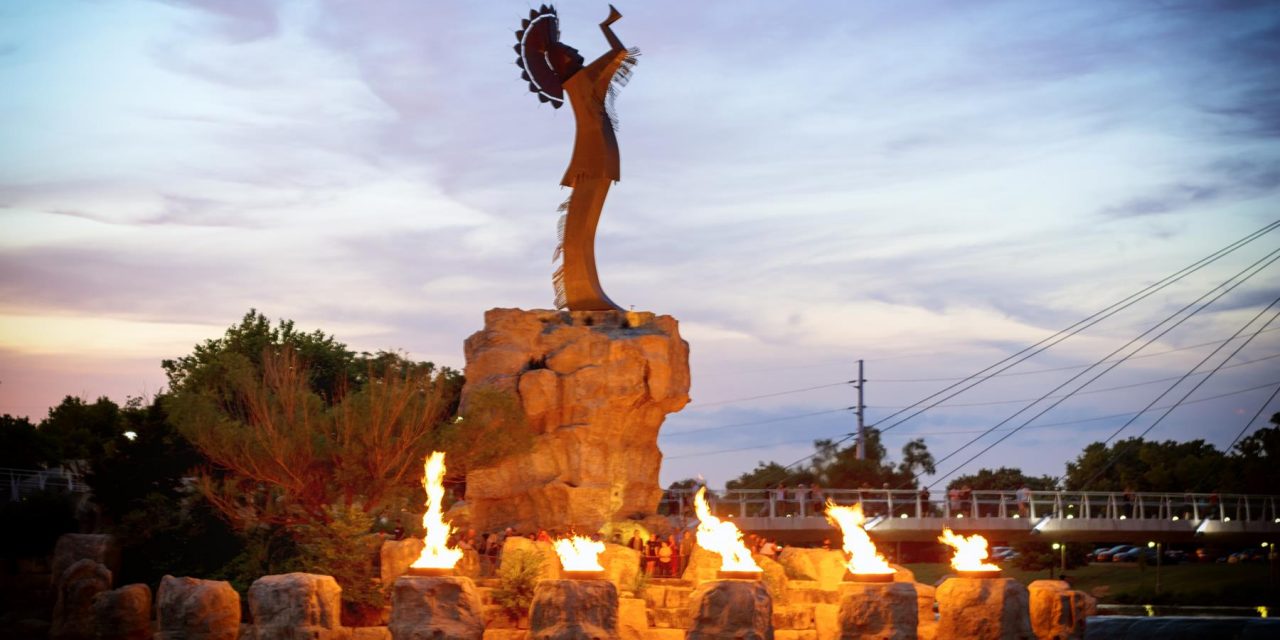 The tale of Wichita, as many first-time visitors soon realize, is told largely through its Western lore and aviation heritage. In a place that’s been called both Cowtown and Air Capital of the World, the storylines revolve around plains and planes.

In downtown Wichita, the chief tourist magnet is an iconic statue called Keeper of the Plains. The 44-foot-tall, weathered-steel sculpture of an American Indian raising his hands in supplication to the rising sun, stands on a peninsula at the confluence of the Arkansas and Little Arkansas rivers. Created by Native American artist Blackbear Bosin (1921-1980), the impressive work of art, set on a manmade stone promontory, honors the Plains Indians who lived here long before the white man arrived.

A prime gathering spot in Wichita and a symbol of the city, the Keeper of the Plains is best experienced during a nightly ritual when five fire pots at the base are lit. People congregate at the statue or watch the spectacle from the bridges or riverbanks. The ring of fire lasts 15 minutes and makes a perfect ending to a summer’s day as you commune with friends, family or the Great Spirit. The flames start at 9 p.m. in spring and summer, 7 p.m. in fall and winter.

Wall panels at the Keeper of the Plains Plaza have descriptions of Indian ways of life. The Plains Indians represent many tribes, including the Kiowa and North and South Cheyenne. Also at this location is the Mid-America All-Indian Center, which features a museum and a gift shop featuring artists’ work, plus an outdoor area with a full-size tipi alongside native edible and medicinal gardens. 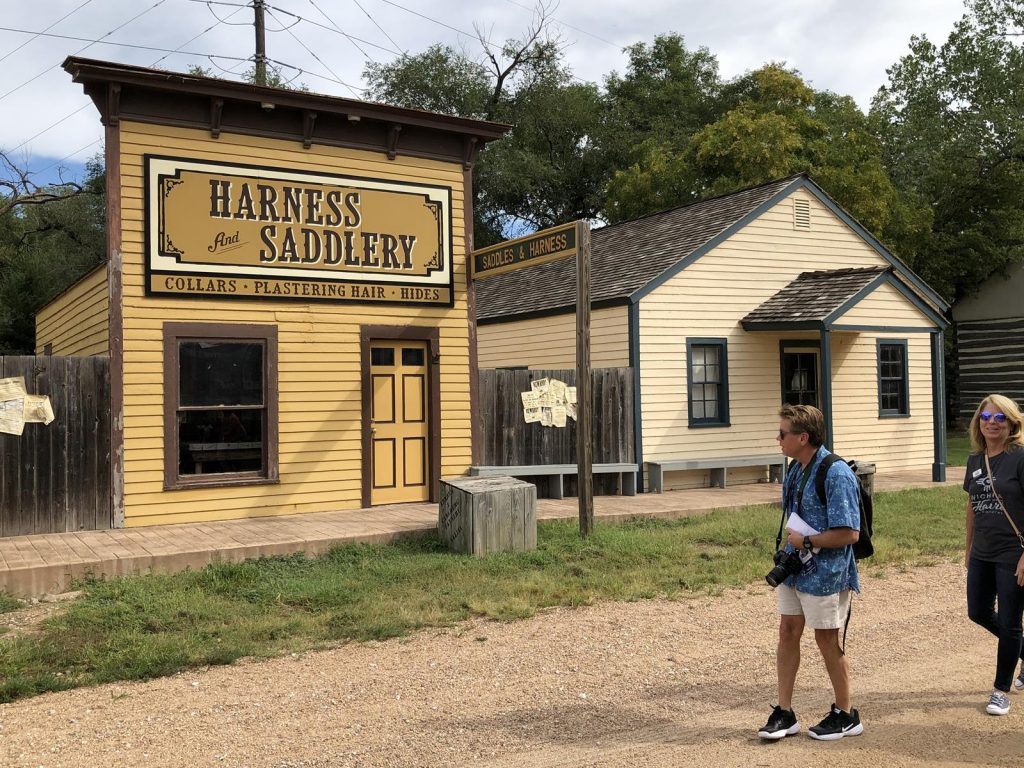 Other museums along the rivers’ path in the heart of town are Botanica Wichita, with more than 30 themed gardens; Exploration Place, a hands-on science center; Wichita Art Museum, offering an outstanding collection of American art; and the open-air Old Cowtown Museum.

Wichita’s Cowtown moniker dates from the 1870s when, for a brief period, it was an end point for Chisholm Trail cattle drives that started in Texas. Once the cattle arrived in Wichita, they were shipped east in special train cars to cities hungry for fresh beef. The drives ended in 1876 after the cattle trade moved west to take advantage of new rail lines.

The collection of 40-plus historic buildings at Old Cowtown Museum represents 19th century Wichita, a “truck stop” on the Plains for military traffic, cowboys and buffalo hide hunters. Restorations and reproductions of structures from 1865-1890 include a saloon, jail, general store, drugstore, morgue, school, church and railroad depot. A blacksmith and other costumed interpreters demonstrate pioneer skills. There is also a working farm.

During Wichita’s days as a thriving cattle shipment point, its Historic Delano District (then a separate town) abounded with bars and brothels catering to the rowdy cowboy crowd. Today Delano bustles with an eclectic assortment of eateries and shops along Douglas Avenue, central Wichita’s main thoroughfare, the same path where cattle were driven to pens and then loaded onto trains. A clock tower monument to the Chisholm Trail stands at the roundabout.

The Monarch, a casual restaurant occupying an old 1960s gas station facing the roundabout, is home to the largest craft bourbon and whiskey collection in Kansas. Sandwiches with house-smoked meats are a specialty; the Roundabout consists of smoked ham with apple slices, brie and Dijon mustard. At the Delano Barbeque Company, favorites include the Chisholm Trail Pulled Pork Sandwich, served open-faced on Texas toast with pork, baked beans and shredded cheese. All Things Barbecue is the ultimate store for the outdoor cook, offering a full line of grills, cookers, smokers and patio furniture, along with rubs, sauces and accessories. For a vast selection of BBQ sauces (mostly from Kansas) and hot sauces, drop by Sweet ’n Saucy, which also sells candy and more than 250 kinds of craft soda. A few doors down, test your axe-throwing skills at Blade & Timber. 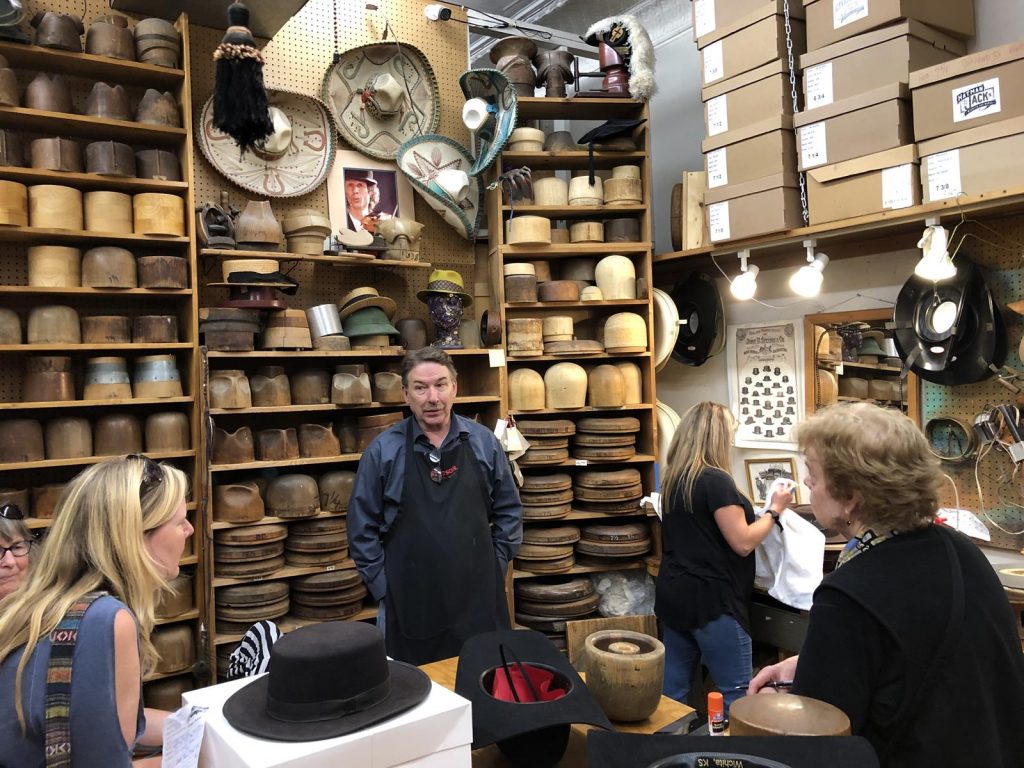 A Delano mainstay, Hatman Jack’s Wichita Hat Works is the place to pick out the perfect headgear, whether it’s a 10-gallon Stetson, a fedora, a top hat or something for an elegant garden party. Jack Kellogg takes pride in educating his customers and making sure they come away with a hat that fits their face. On a tour of the back shop he’ll talk about his hat-shaping equipment, some of which dates to the 1920s. He has crafted custom hats for movie productions and celebrities like Luciano Pavarotti, Merle Haggard and Prince.

Just two blocks from Douglas Avenue in the Delano district is a brand-new stadium that will welcome minor league baseball’s Wichita Wind Surge when the current health crisis eases and sports events can be held again. A new team in the 16-member Pacific Coast League, the Wind Surge is the Triple-A affiliate of the Miami Marlins and replaces the New Orleans Baby Cakes, whose owner has moved the team to Wichita.

Situated along the Arkansas River, the $75 million stadium will seat 6,500, with space for 3,500 more on berms and picnic areas. It will host other sports, concerts and festivals. The new venue occupies the site where Lawrence-Dumont Stadium stood from 1934 to 2018.

Airplane manufacturing and other aviation-related industries have played a big part in Wichita’s economy for a century. The city became known as the Air Capital of the World in the 1920s, when the slogan started appearing on everything from flour sacks to stationery. By 1929 the city was making a quarter of the country’s airplanes, and today Wichita produces about 35 percent of the world’s (and 48 percent of the United States’) general aviation aircraft. 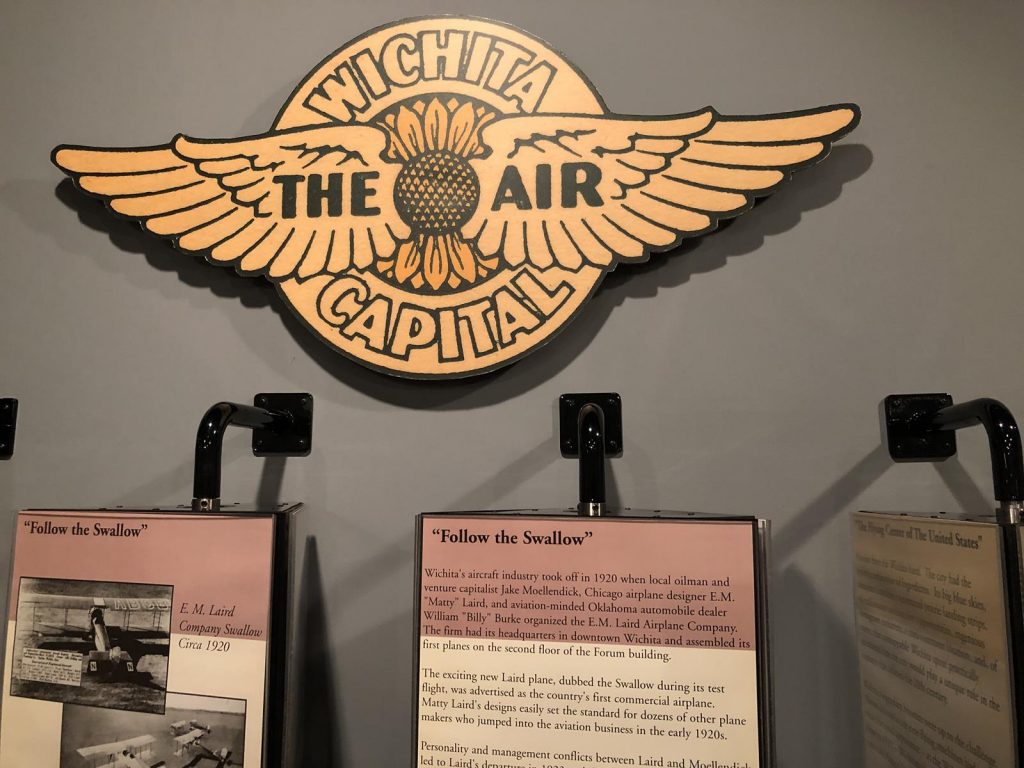 Exhibits at downtown’s Wichita-Sedgwick County Historical Museum illustrate how Wichita owes its aviation success to ingenious farmers and other entrepreneurs experimenting with equipment on the flat, treeless plains. The local oil boom in the early 20th century helped fund start-up companies. Boeing, Cessna, Stearman, Learjet and Beechcraft were airplane manufacturers born in Wichita. Turning out flying machines for the U.S. Army and Navy during World War II kept factories working around the clock, as the exhibit “War Clouds Rain Dollars into Wichita” explains. 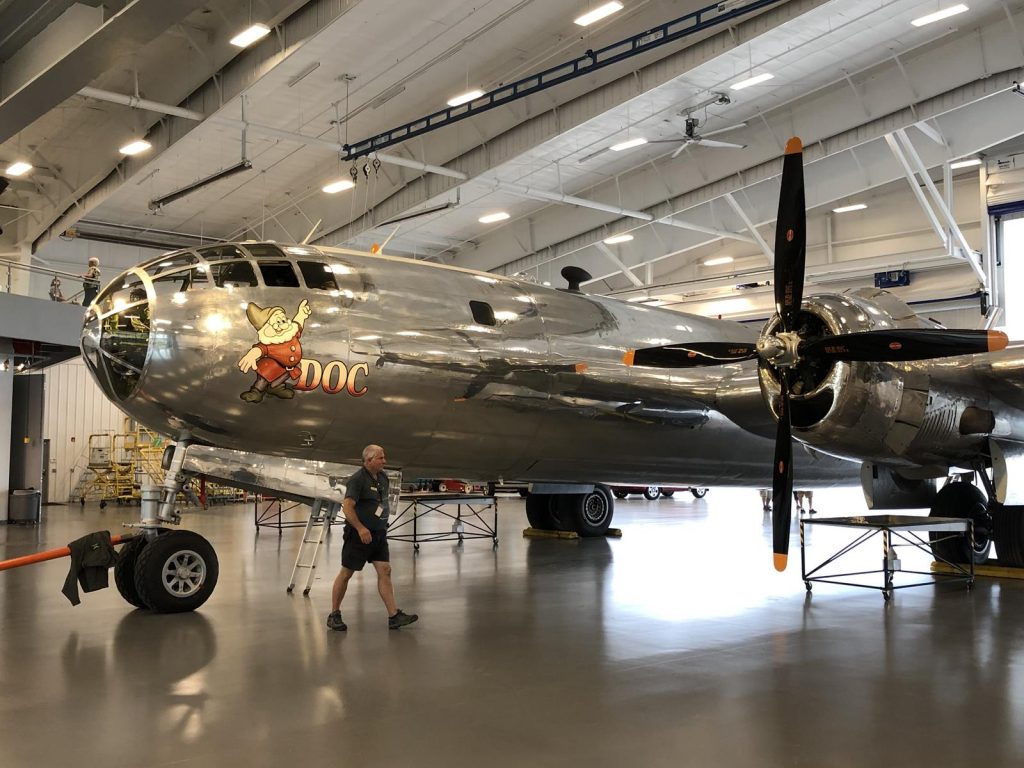 Wichita’s B-29 Doc Hangar & Education Center showcases a retired B-29 Superfortress, one of two remaining airworthy B-29s in the U.S. The most advanced bomber of WWII, it was among 1,644 B-29s built for the military at Boeing in Wichita during the early 1940s. Called Doc, the plane was part of the Snow White and Seven Dwarfs squadron operating first out of China and then the Pacific islands. In the words of a museum volunteer, the B-29 was built to “bomb the hell out of Japan.” The military retired its last B-29 Superfortress in 1960, but Doc continues to fly, providing 90-minute experiences to those who can afford at least $600 for the privilege. Offering flights from May to November, Doc accommodates up to 10 passengers and has a crew of six. When not in Wichita, the plane appears at air shows around the country.

Historical displays at the hangar trace the development of the B-29 Superfortress. An exhibit on the importance of women in the war effort spotlights the national Rosie the Riveter campaign and local resident Connie Palacioz, who, at age 18, worked on the Wichita assembly line that built Doc. While helping reconstruct it more than a half century later, she noted that all but seven of the rivets she drilled into the nose section were still in place. Now 95 and a resident of Newton, Kansas, Palacioz visits the hangar twice a week and greets visitors in the lobby.

The Kansas Aviation Museum, housed in the former Wichita Municipal Airport terminal building, chronicles the development of flight in Kansas and displays more than 40 historical planes. It’s a treasure house of aviation-related artifacts, and there’s a control tower that can be toured. 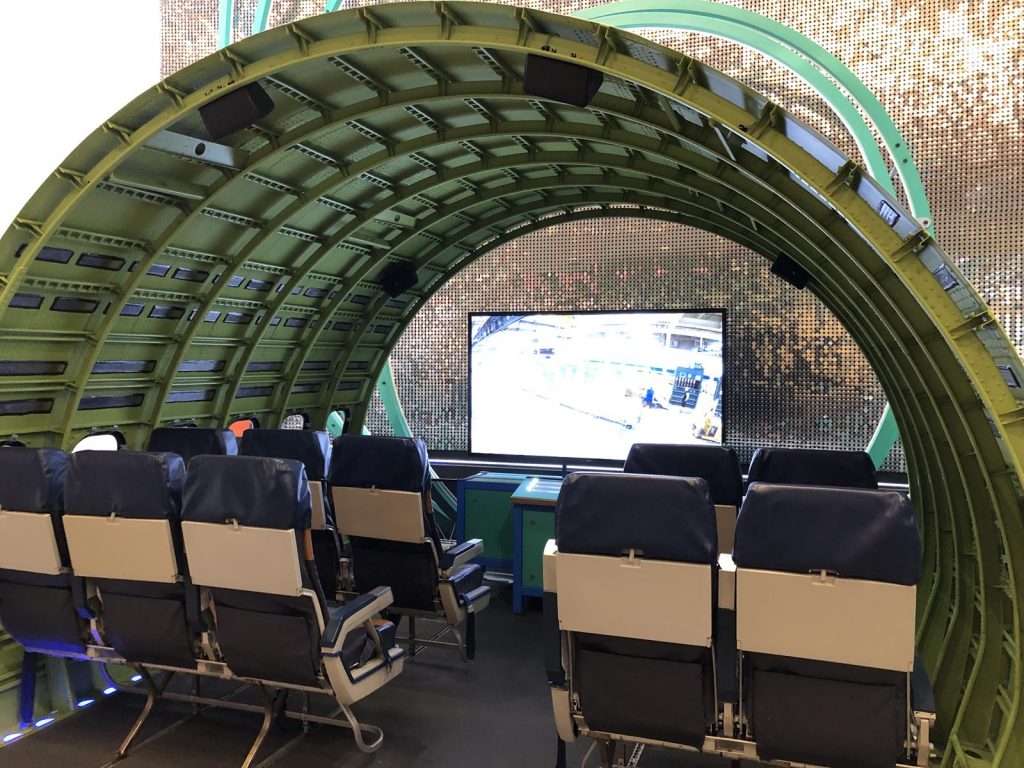 Exploration Place has a mini theater fashioned out of a Southwest Airlines jet.

Aviation exhibits at the riverside Exploration Place let visitors tour a private luxury jet outfitted with Wichita-made furnishings, smell chemicals used in testing and building planes, and pull the trigger on a virtual paint gun to paint a plane exterior. A theater fashioned from a section of a Southwest Airlines fuselage, including original seats, shows videos on designing and manufacturing planes.

In nearby Benton, a relaxing way to capture the spirit of flight is to dine at Stearman Field Grill & Bar, where tables are a mere 20 yards from a private airport’s landing strip.

Tourism information on Wichita is available from www.visitwichita.com.