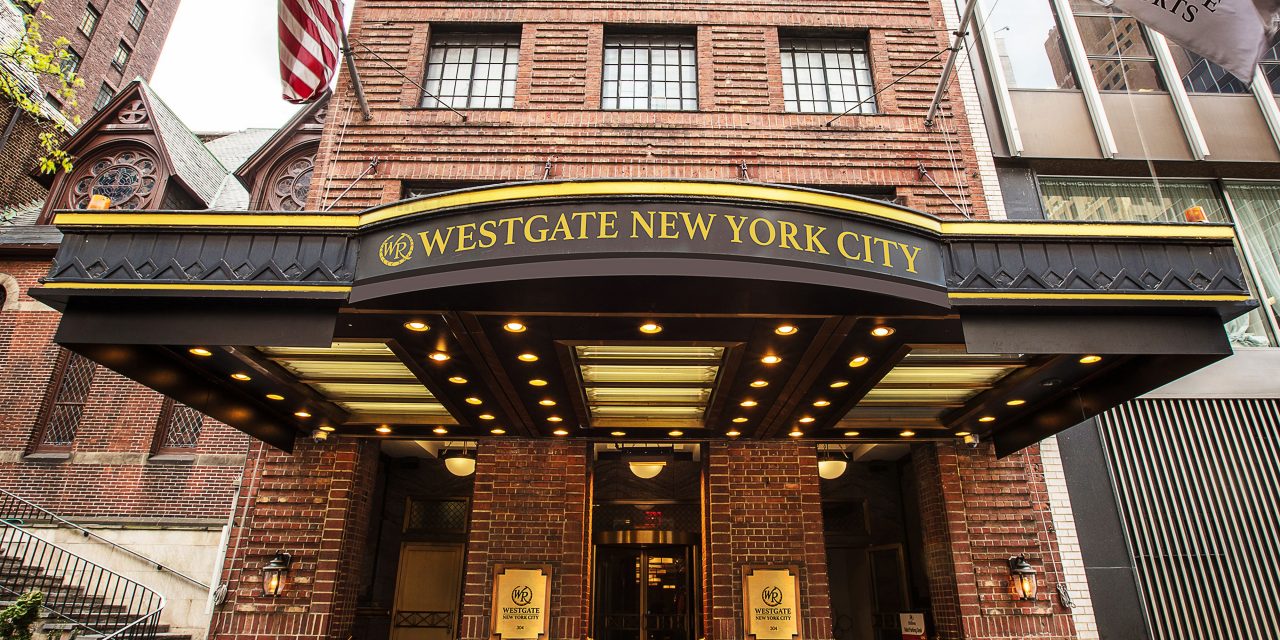 We don’t normally associate the word “cozy” with New York City, but a snug feeling swept over me while making a new discovery on my recent trip there. I’m familiar with most neighborhoods in the borough of Manhattan but probably would not have stumbled across historic Tudor City had I not stayed at the new Westgate New York Grand Central. 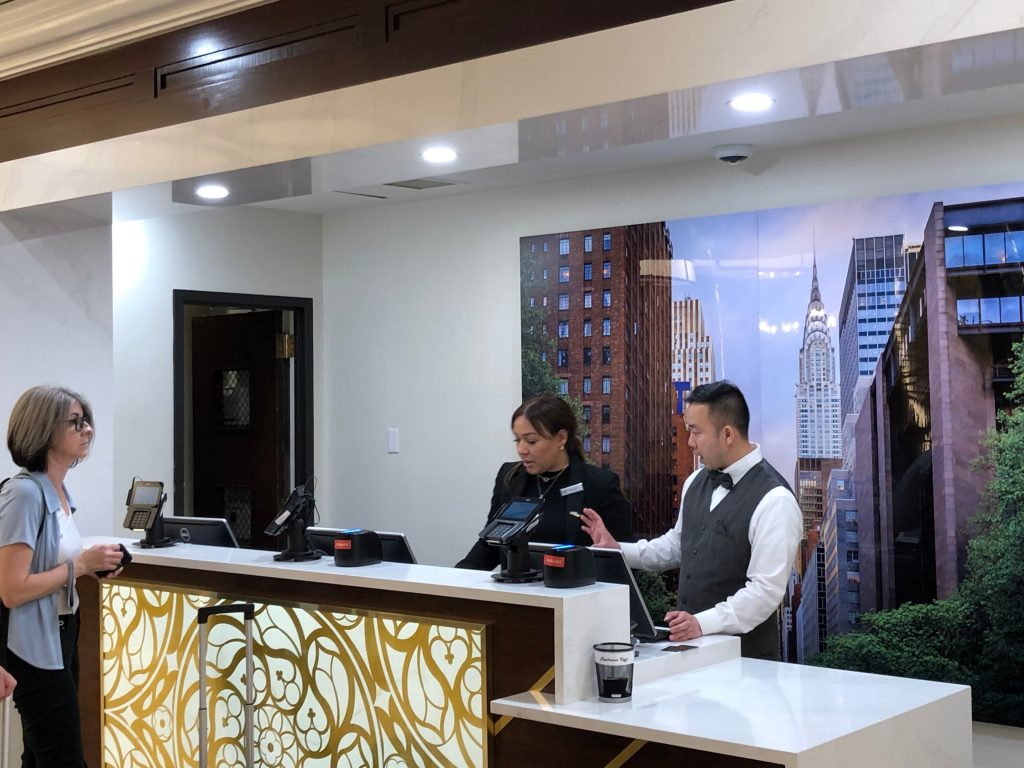 Checking in to a grand experience. (Randy Mink Photo)

Tucked in the Murray Hill district on Midtown Manhattan’s eastern flank, Tudor City, a leafy residential oasis brimming with Old World charm and the architectural flourishes of high-rise buildings almost a century old, proved to be a great base of operations, and the Westgate the perfect nest.

Grand Central Terminal and the heart of tourist activity were short walks from my East 42nd Street hotel. United Nations Headquarters, an East River landmark, was just two blocks in the opposite direction. (I always like to stay at hotels near Grand Central, so the Westgate really fit the bill.)

The 300-room Westgate New York Grand Central occupies two red-brick towers in Tudor City, an ambitious development started in 1927. Designed to be a self-contained community, Tudor City was the first residential skyscraper neighborhood in the world. By 1930 it had 2,800 apartments and 600 hotel rooms. The Westgate originally was the Hotel Tudor and for many years was a Hilton. Of all the historic hotels in New York City, Westgate New York Grand Central has most artfully captured the gilded glow of the ’30s. 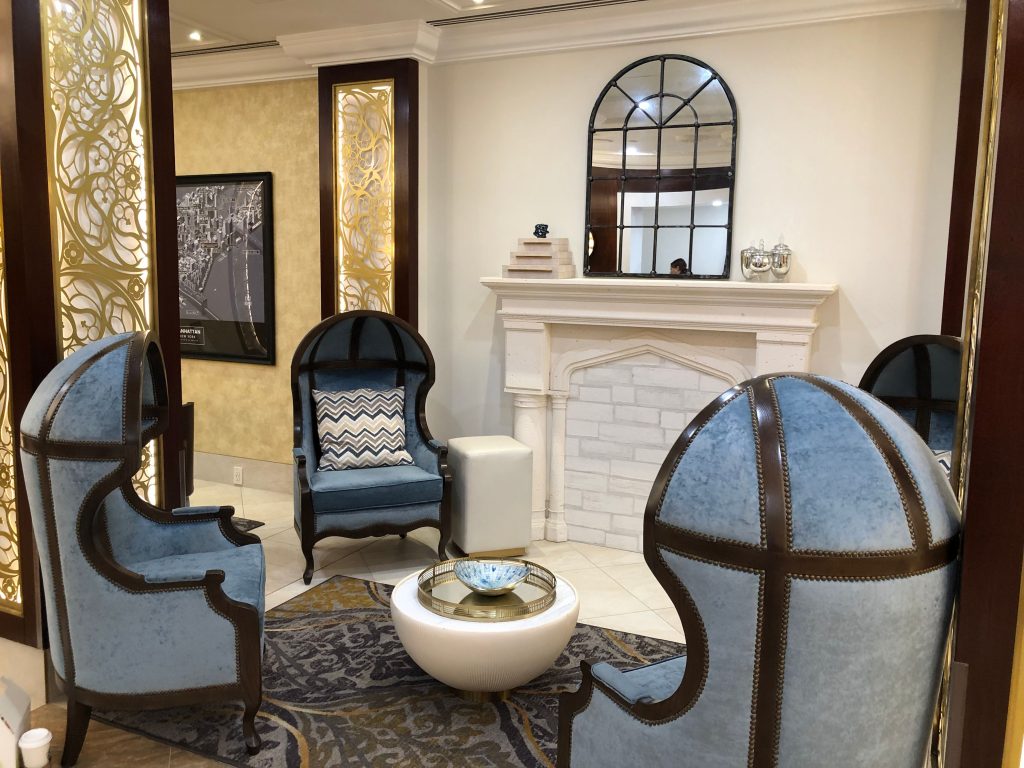 Rebirth of a Classic Hotel

Westgate Resorts opened the hotel in June 2018 and celebrated a grand reopening July 4, 2021. In a major makeover, the 20- and 17-story towers from 1927 were completely gutted, but original mouldings and outer windows survive. There are 38 different room configurations, and 13 rooms have a private balcony or terrace. The 42nd Street facade currently is undergoing a facelift.

The Westgate’s inviting lobby has a faux fireplace, seating areas and Art Deco-inspired gold screens. Its most striking features are artworks depicting glamorous women, including framed reproductions of iconic Gustav Klimt paintings. Most recognizable is the Klimt work popularly called as The Woman in Gold, a portrait of Viennese socialite Adele Bloch-Bauer set against a field of gold, Byzantine-like mosaics. When sold at auction for $135 million in 2006, the Austrian artist’s 1907 masterpiece was the most expensive painting ever purchased. The Jewish family’s quest to reclaim the portrait, stolen by the Nazis during World War II, was the subject of Woman in Gold, a 2015 movie starring Helen Mirren and Ryan Reynolds. 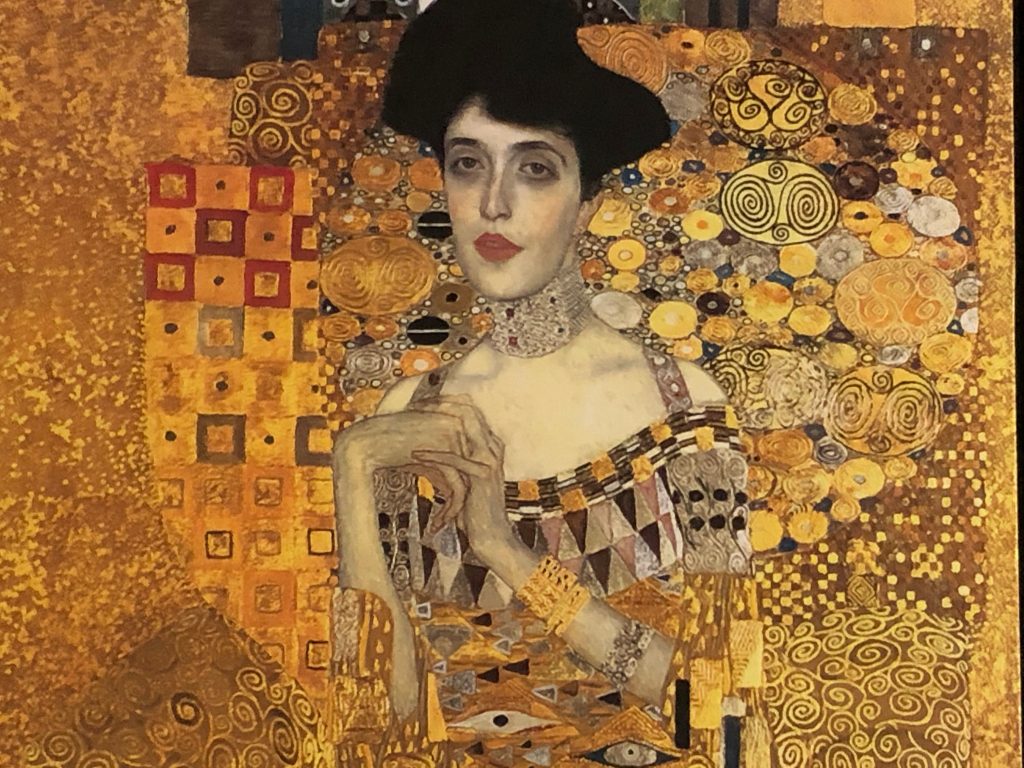 Reproductions of Gustav Klimt’s portrait of a Viennese socialite, a work popularly known as The Woman in Gold, decorate guest rooms and the lobby.

The same golden portrait adorns guest room walls. Another Klimt painting of the woman, Judith and the Head of Holofernes, also pops up around the hotel. These classics add a feminine touch that contrasts with masculine, Gothic-style decor elements mirroring Tudor City architecture such as the black metal strips dividing guest room window panes and two arbor-like entrances to Tudor City Tavern, the hotel’s social hub.

With its exposed brick walls and columns, the rustic lobby bar and lounge, which serves as a breakfast room in the morning, has a cellar-like ambience. Lighting fixtures include brass wall sconces and circular chandeliers ringed with light bulbs. There are booths, marble tables and upholstered chairs with pillows. Across the way, stool seating is available at the bar and a long, high-top table.

The bar offers a wide variety of whiskeys and bourbons, plus signature cocktails like Moon Over Manhattan, a blend of vodka, elderflower liqueur and white cranberry juice served in a martini glass and garnished with an edible orchid frozen inside an ice sphere. Tudor City Sunrise combines light run, fresh-squeezed lime, Campari, pineapple juice and egg whites. 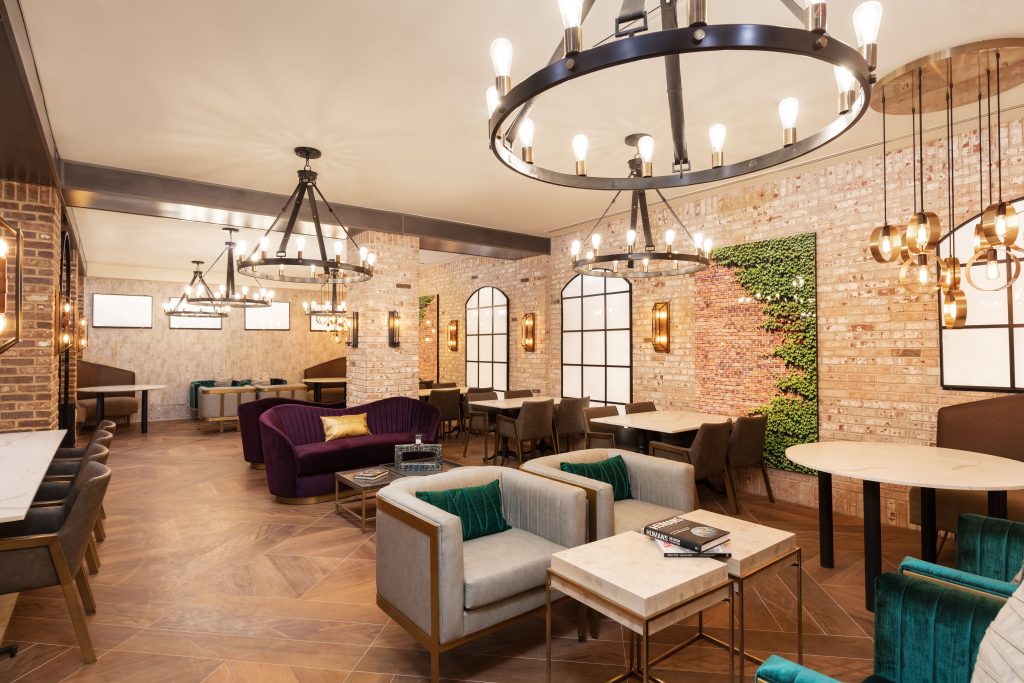 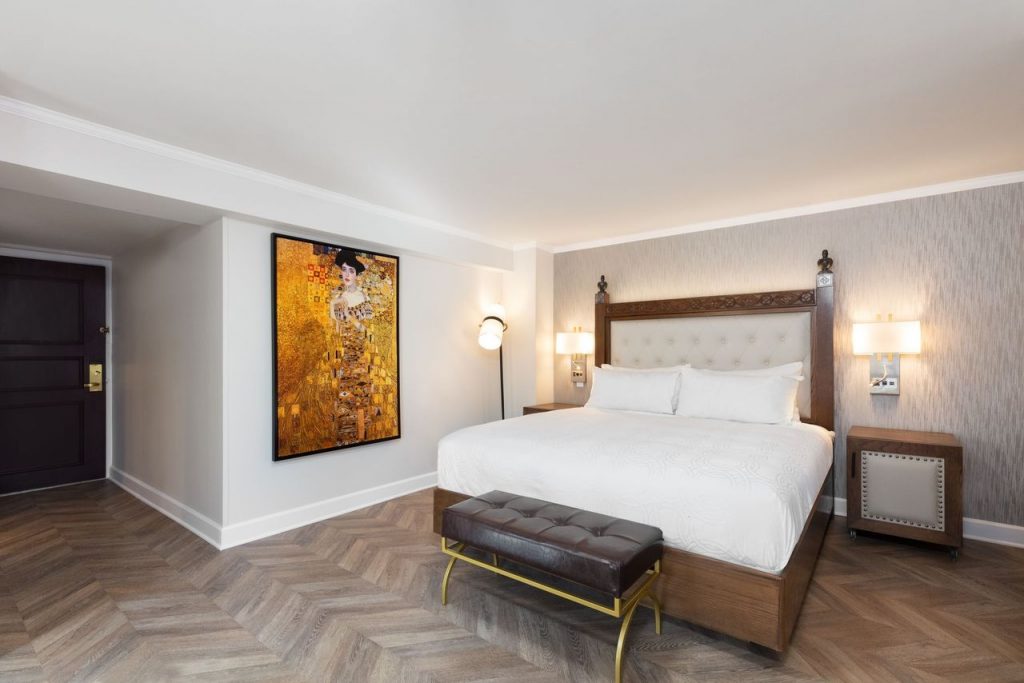 Triple-pane windows keep out much of the traffic noise, and they open for fresh air. I had views of the balconies, terrace gardens and penthouses of vintage Tudor City buildings accented with terra cotta medallions, limestone window trim, castellated rooftop turrets and other Neo-Gothic embellishments typical of those found throughout the neighborhood. It was like waking up to merry olde England or a university campus in Collegiate Gothic style. Some rooms afford views of the East River and United Nations compound.

One door east of the Westgate stands the 1871 Church of the Covenant, a red-brick Presbyterian house of worship that wraps around the back of the hotel. Of note are its oversized wooden door, green copper steeple and a Tudor-style, half-timbered facade. Ornate Gothic stylings and Victorian details beautify the chapel and parish house. 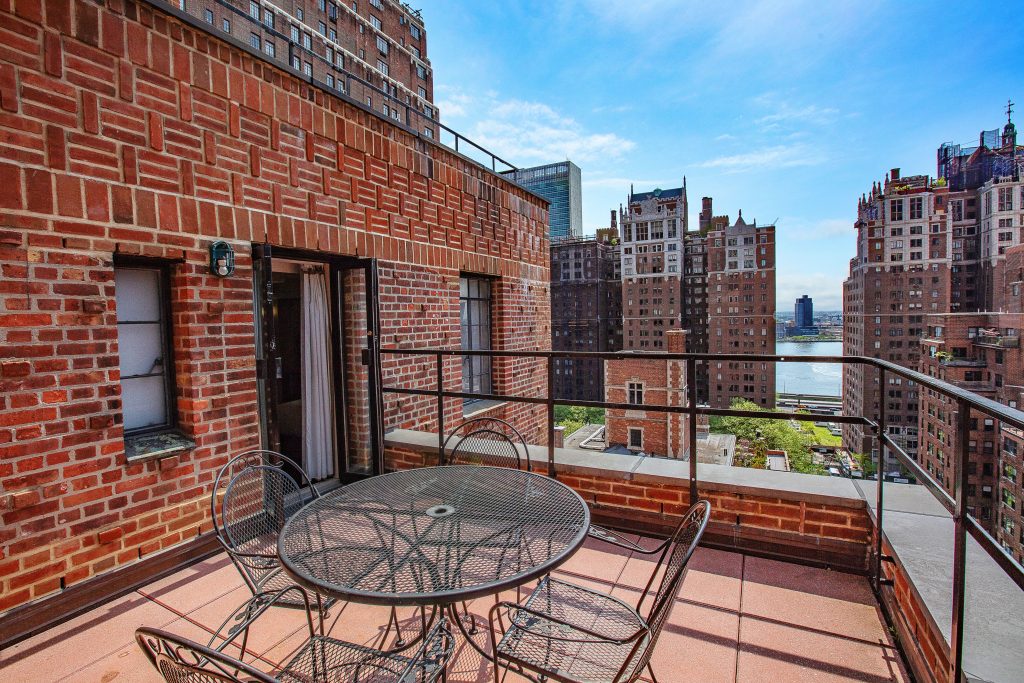 Walk farther east and ascend a staircase to the elevated section of Tudor City that overlooks 42nd Street, which was lowered in 1950. Two intimate, privately run parks with benches, bistro chairs, decorative lampposts, gardens and mature trees provide space for relaxation, contemplation or a quiet lunch. Across the street (Tudor City Place), the 1927 Prospect Tower is home to Tudor City Steakhouse, which opened as the Tudor City Restaurant in 1928. The 25-story residential tower, with its arched entryways and leaded glass, is considered the grande dame of Tudor City and sports a “Tudor City” rooftop sign that lights up at night.

After a busy day of Manhattan sightseeing, it’s comforting to know a good night’s sleep awaits at the Westgate New York Grand Central in peaceful Tudor City. Walking east on 42nd Street toward the illuminated “Tudor Hotel” sign still in place on the north tower, a beacon for generations of travelers, you rest assured that your home away from home is ready to welcome you back. 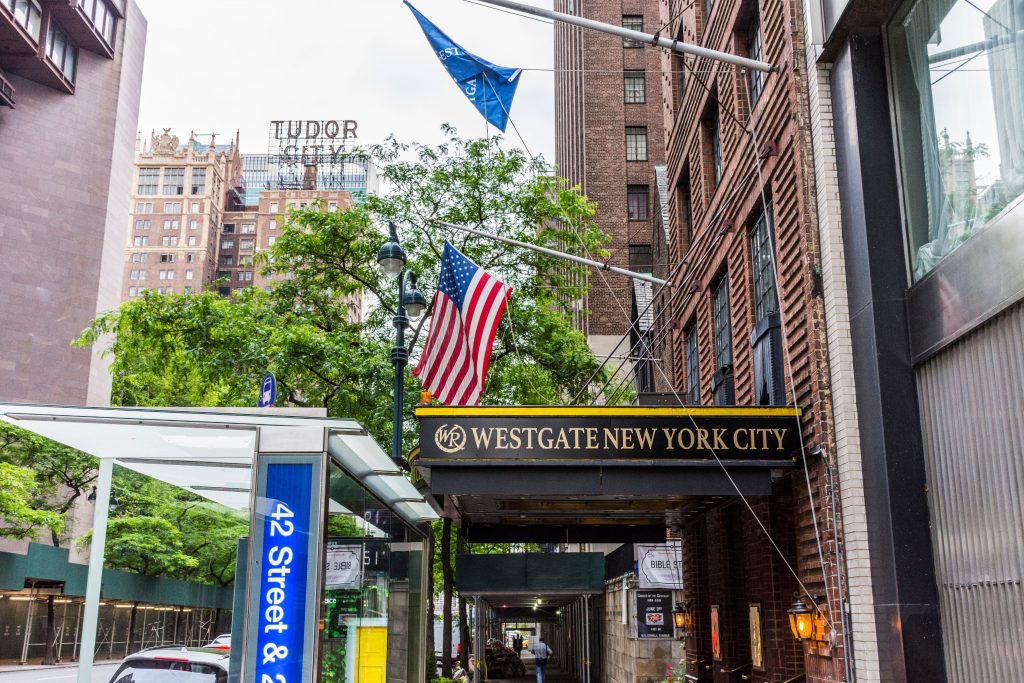 Westgate New York Grand Central, a member of the National Trust for Historic Preservation’s Historic Hotels of America, is one of 22 U.S. properties of Westgate Resorts, a privately held company based in Central Florida. I’d known about their Orlando resorts for some time and was glad to expand my horizons with the stay in New York.

For more information on Westgate New York Grand Central, call 212-986-8800 or log on to www.westgateresorts.com.