The term “hidden treasure” has been overused by travel publicists, travel writers and guidebook authors, but there is just such a gem on the highest hill in Harrisburg, Pa.

The National Civil War Museum, operating under the radar of many travel planners since it opened in 2001, is celebrating 10 years as the largest museum in the world dedicated solely to America’s greatest internal struggle, the conflict that pitted state against state, brother against brother. Its anniversary coincides with the sesquicentennial of the beginning of the Civil War, which raged from 1861-65. 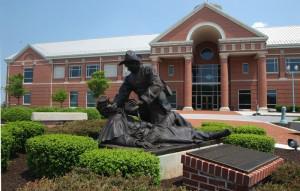 If you ever wanted to learn about the Civil War without putting in too much effort, this hilltop museum in Reservoir Park is the place. Far from presenting a dry history lesson, it breathes life into the subject with dramatic videos, audio stations, high-tech touches and living history demonstrations that put a human face on the war, immersing visitors in the time period. There certainly is more to the museum than artifacts and dioramas, though it has impressive examples of both. You’ll find the gauntlet worn by Gen. Thomas J. “Stonewall” Jackson at Chancellorsville, a Bible carried by Gen. Robert E. Lee and the saddle of Gen. George McClellan, not to mention the expected array of rifles, swords, uniforms and flags.

Visitors start on the second floor and end up on the first, passing through exhibits that follow the war in chronological order. Well laid out, the museum tells a complex story of Blue vs. Gray through an engaging narrative that’s easy to follow, with equal emphasis on both sides. The timeline begins with the issues straining the nation and concludes with the Confederate surrender at Appomattox Court House and the Lincoln assassination. 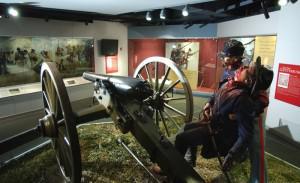 A diorama of Captain Cushing’s 4th U.S. Artillery places visitors in the midst of  Pickett’s  Charge at the Battle of  Gettysburg.

The narrative starts in the House Divided 1850-1860 gallery, where three flat-screen monitors introduce 10 ordinary people who lived during the Civil War. Actors and actresses in “We the People” portray such characters as a North Carolina farmer, a country boy turned soldier, an abolitionist newspaper editor, a slave and the wife of a Mississippi plantation owner. These everyday folks express worries for their country, families and own well-being as war looms on the horizon. Their comments are based on letters, diaries and documents in the museum’s collection. Visitors meet up with the characters on the journey through the museum and discover their fate in a 16-minute film at the end.

House Divided 1850-1860 is followed by the gallery American Slavery: The Peculiar Institution, 1850-1860. Artifacts include a brass slave collar and shackles with chain. A powerful diorama depicts a slave auction.

The next gallery, entitled First Shots, 1861, presents a striking photographic mural of the bombardment of Fort Sumter in South Carolina. Other galleries describe the recruiting of armies and military campaigns in various parts of the country.

An observation deck overlooks the Susquehanna River and the area of Harrisburg that contained Camp Curtin, one of the largest Federal recruiting and training centers. Museum visitors also learn it served as a supply depot and convalescent center for the sick and wounded. Harrisburg, as the capital of Pennsylvania and a major rail hub for men and materials, played a vital role in the war. A target of invasion by the Confederate army, it was never attacked. After the Battle of Gettysburg in 1863, Gen. Lee recalled his scattered army just as the northernmost element near Harrisburg was preparing to take the city.

A video on the Battle of Gettysburg, the bloodiest single battle in North American history and turning point of the war in the East, combines grisly black-and-white still photos of dead bodies with scenes from the Hollywood movie Gettysburg and the re-enactment staged every summer in Gettysburg, about 45 minutes south of Harrisburg. A mural and diorama put museum-goers right in the midst of Gen. George Pickett’s famous charge. Under glass is a lock of Pickett’s hair, which has been passed down through the family. (An aide described the general’s hair as “below shoulder length and highly perfumed.”) Other items in the Gettysburg gallery include canteens, revolvers and cannonballs found on the battlefield.

In the music gallery, visitors can pick up the phones and listen to songs of the day. Among the Northern numbers: “Battle Hymn of the Republic,” “Lincoln and Liberty” and “Booth Shot Lincoln.” Southern favorites included “Dixie” and “When Johnny Comes Marching Home.” And there are recordings of bugle calls and inspirational spirituals. On display are drums and bugles carried by boys, some as young as nine years old. You learn that boys also carried water, gathered wood, groomed horses, gave haircuts and buried the dead. Some took up arms. 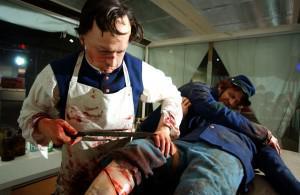 An amputation scene in a field hospital tent portrays an orderly holding a soldier in place while a surgeon works on his gangrene-blackened leg.

The Cost of War gallery graphically shows the suffering endured by soldiers. An amputation in a field hospital portrays an orderly holding a soldier in place while a surgeon works on his gangrene-blackened leg. Under glass are lead bullets with teeth marks. The practice of “biting the bullet” was meant to prepare soldiers for the pain to come. Also in this gallery are disturbing photos of prisoners of war, some little more than walking skeletons. The next gallery, Women in the War, adds another perspective.

The museum’s most popular exhibit is the new interactive “Meet Mr. Lincoln,” which comes after “A Nation Endures,” a film that discusses the end of the war and assassination of President Lincoln. Using touch-screen technology developed by Carnegie Mellon University’s Entertainment Technology Center, guests can virtually interview Abraham Lincoln, Mary Todd Lincoln and even John Wilkes Booth. On the computer, choose from a list of pre-programmed questions and then immediately, on a screen right your their eyes, get an answer from an actor playing one of the historical figures. Ask Lincoln about his views on slavery or war strategy or more personal things like “Were you the tallest man you knew?” or “Did you smoke or chew tobacco?” Ask his wife “What happened on the day President Lincoln was assassinated?” One of the questions for Booth is “What happened to you after you ran from Ford’s Theatre?” On both sides of the larger screen, flat screens with photographs appear during certain questions to supplement answers.

Two changing exhibit galleries are located near the Lincoln interactive. Throughout 2011, in observance of the Civil War sesquicentennial, the “1861” exhibit focuses on the first year of the war. It discusses the inaugurations of Lincoln and Jefferson Davis, the road to secession, the Baltimore riots and Lincoln’s call for troops. A similar exhibit focusing on the particular year will open in January of each year through 2015.

In warm-weather months, visitors gather on the grassy park land behind the museum to witness Civil War military drills, encampments, Victorian games and other living history portrayals that bring the 19th century to life.

Visitors will leave the National Civil War Museum enlightened, feeling patriotic and thankful that the Union was saved. In the gift shop, even those who never had a passion for military history may find themselves buying a book on Stonewall Jackson, Lincoln’s assassination, Civil War medicine or life on the home front. A visit to this “hidden” Harrisburg treasure is an eye-opening and mind-expanding experience.