Well, not really. More likely, beer is the word you associate with this Wisconsin metropolis.

But Milwaukee has a thriving cultural life, slices of which are tucked away in museum galleries. On a recent getaway centered around a Milwaukee Bucks basketball game at downtown’s Bradley Center, I carved out time to visit the Milwaukee Public Museum and Milwaukee Museum of Art. 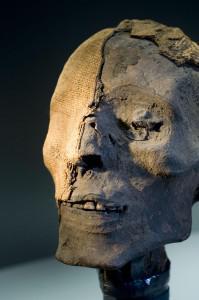 The big draw these days at the Milwaukee Public Museum is Mummies of the World, a traveling exhibition on view through May 30. I really got wrapped up in the subject, spending a whole hour and 20 minutes communing with dead bodies. I had to keep reminding myself these corpses behind glass were once living human beings.

The macabre appeals to me, as you can guess, and at Chicago’s Field Museum I always seem to make a beeline to the Egyptian mummies. But Mummies of the World, the largest exhibition of mummies and related artifacts ever assembled, goes a step beyond, spotlighting preserved specimens from all parts of the world and focusing on the mummification process itself. I can’t think of a museum show I’ve enjoyed more. Only reluctantly did I leave the dark rooms with their track lighting and eerie background music.

Especially intriguing are the mummies discovered in 1994 in a long forgotten church crypt in Vac, Hungary. Three of the 250 unintentionally mummified bodies found are on display, and we know the names of these townspeople who lived in the late 1700s. Michael and Veronica Orlovits and son Johannes—their clothes intact—were among those preserved by the cool, dry air and oil from the pine boards of their coffins. The remains of a 17th century German baron and baroness, found in 1806 in a castle’s family crypt, also depict natural mummification. The baron is still wearing his boots. 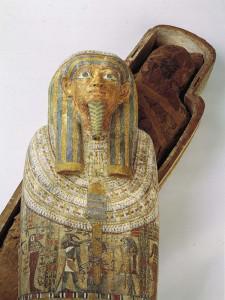 The soft tissues of other human and animal specimens in the exhibit were preserved in peat bogs, attics, salt deposits, and frozen and desert environments where atmospheric conditions were not conducive to breaking down the flesh. (Normally, fungi and mold facilitate the process, with the flesh rotting and flaking off, then the hair and nails falling off until only teeth and bones are left.)

Exhibition-goers marvel at the blackened, rubbery body of a woman found in the oxygen-free environment of a Netherlands peat bog. Researchers believe she lived during the second or third century. From analyzing the food in her stomach, they know her last meal was porridge with millet, rye, oats and blackberries. (That’s probably more than most people want to know.)

Also on display are a tattooed woman from Peru (1240 A.D.) and other mummies from South America in seated or curled-up positions. South Americans were the first to mummify their dead, long before the Egyptians.

But Mummies of the World also has plenty of classic examples that survived in Egypt’s desert climate. The exhibition’s largest artifact is a painted wooden sarcophagus of an Egyptian high priest; next to it is the mummy, wrapped in decaying linen bandages that were treated in resin and other chemicals. (Embalmers took out the internal organs and removed the moisture from the flesh by packing the body in salt for at least 35 days.)

Displayed in individual cases are mummified body parts from Egypt that had been cut up and sold to tourists in the 18th and 19th centuries. Take note of the jar of ground-up mummies—powdery remains were sold, reputedly for medicinal purposes, by European pharmacies as recently as the early 20th century. Egyptian animal mummies in the exhibition include a cat wrapped in elaborately painted bandaging.

Examples of naturally mummified animals include a squirrel trapped in the attic of German house and a hyena in a cave in Jordan, plus a freeze-dried snow hare and a dog found in a peat bog.

Visitors also learn about the techniques scientists use to study mummies and determine when the people lived and what diseases they had. Methods include computer tomography (CT) scans, magnetic resonance imaging (MRI), DNA analysis and radiocarbon dating.

Mummies in the exhibition are on loan from museums around the world. Mummies of the World was assembled by the Reiss-Engelhorn Museums in Mannheim, Germany.

The Public Museum is my favorite Milwaukee attraction and I could spend a whole day there getting lost in other worlds. A must-do is the Rain Forest exhibit, which replicates a Costa Rican jungle with an elevated walkway through a simulated forest canopy. And don’t miss the chance to mingle with fragile winged creatures in the butterfly gardens.

Everyone is impressed with the museum’s large-scale dioramas—Crow Indians hunting buffalo, a Guatemalan marketplace, wild game on an East African savannah, and Eskimos, caribou and musk oxen in the Arctic.

Other exhibit areas cover Asia, the Pacific Islands, dinosaurs, and Wisconsin flora and fauna. The enchanting European Village represents folk cultures of Poles, Germans, Finns and other ethnic groups who came to Milwaukee in the late 1800s. The adjacent Streets of Old Milwaukee allows nostalgic peeks into shops and businesses of yesteryear. 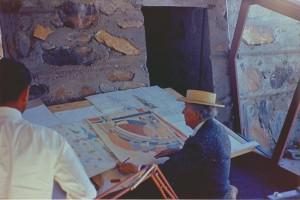 If you get to Milwaukee by May 15, you can catch the Milwaukee Art Museum’s special exhibition Frank Lloyd Wright: Organic Architecture for the 21st Century. At this world-class museum on Lake Michigan, itself a stunning example of architecture, you’ll see more than 150 of Wright’s works, including drawings—33 of which have never been exhibited publicly—scale models, furniture, photographs and video footage.

Offering a fresh perspective on the architect’s philosophy of incorporating the environment into everyday life, the exhibition celebrates Wright’s seven-decade career and the 100th anniversary of Taliesin, his home, studio and school in Spring Green, Wis.

The Milwaukee Art Museum, along with the city of Milwaukee, is gearing up for a Chinese summer. In fact, Milwaukee Mayor Tom Barrett has declared it the “Summer of China,” with festivals and a dragon boat race among events planned.

Highlighting the celebration of Chinese culture will be The Emperor’s Private Paradise: Treasures from the Forbidden City, a collection of more than 90 artifacts from the Qianlong Garden in Beijing. The Milwaukee Art Museum exhibition begins June 11 and runs through Sept. 11.

The Qianlong Garden, a walled, two-acre jewel in the immense Forbidden City complex, was built in the 18th century as part of the Qianlong Emperor’s sprawling retreat, commissioned in anticipation of his retirement. Buddhist shrines, gazebos, sitting rooms, libraries, theaters and gardens were interspersed with bamboo groves and other natural arrangements. The emperor would retreat from affairs of state and meditate in closeted niches, write poetry, study the classics and delight in his artistic creations. Restoration of the garden’s buildings, pavilions and outdoor elements began in 2001. (After the last emperor withdrew from the Forbidden City in 1924, the garden complex was shuttered, its many treasures left to decline and gather dust.)

Most of the murals, wall coverings, paintings, furniture, jades, cloisonné and other objects—to be on display at only three museums worldwide—have never been seen by the public. When they return to Beijing, they not likely will leave the country again.

Providing an evocative setting for visitors, the traveling exhibition will combine film footage of the garden with music and such features as water, wind and birdsong.

Milwaukee hosts the 2011 U.S. Open Table Tennis Championships June 30-July 5, 40 years after the U.S. table tennis team became the first group of Americans to be invited to China. The following year President Nixon became the first U.S. president to visit China, paving the way for improved relations between the two nations through “ping pong diplomacy.” More than 800 athletes from 15 countries are expected to attend the Milwaukee meet.

The Milwaukee Art Museum this year also is celebrating the 10th anniversary of its iconic addition designed by Santiago Calatrava. The Calatrava-designed Quadrucci Pavilion, with a moveable sunscreen that resembles a ship’s sail, has helped polish the city’s image, revitalize the lakefront and more than doubled the museum’s attendance. The sunscreen, which lifts like wings over the soaring, glass-roofed reception hall, unfolds when the museum opens each morning and folds at night. It takes 3.5 minutes for the wings (equal to those of a Boeing 747) to open or close.

Honoring the Spanish-born architect’s impact on the city will be the exhibition Building a Masterpiece: Santiago Calatrava and the Milwaukee Art Museum from Sept. 8 through Jan. 1, 2012.