Museum at the Gateway Arch 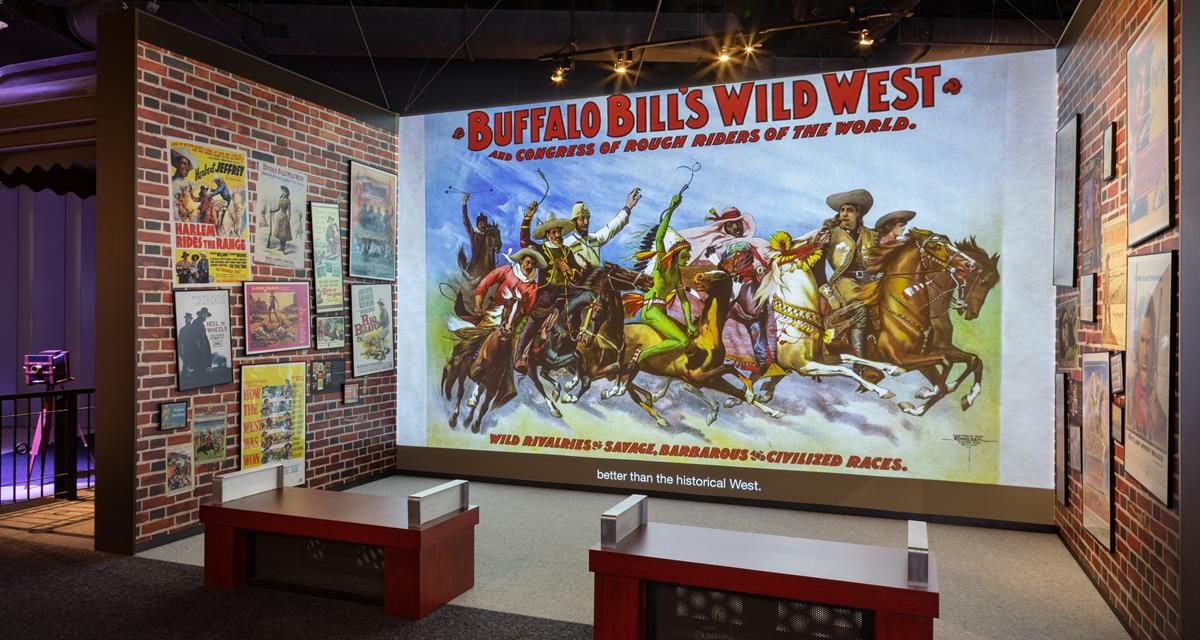 History fans will find much to cheer about at this sparkling addition to the downtown St. Louis riverfront

At St. Louis’ newest museum, oversized murals, larger-than-life photos and jumbo digital maps tell the story of a great Mississippi River city and its role in our nation’s settlement. Interactive touch screens and compelling video make this crowd pleaser even more user-friendly, sweeping visitors up in the saga of the wide-open, rough-and-tumble American West.

Open since July 3, the free-admission Museum at the Gateway Arch, which replaces the outdated and smaller Museum of Westward Expansion, is part of the just-completed, four-year project that has transformed the grounds of Gateway Arch National Park, formerly called Jefferson National Expansion Memorial. The entrance to the underground museum/visitor center, once reached via stairways at the Arch’s legs, faces the Old Courthouse, also part of the national park. Happily for pedestrians, a greenway land bridge aids access between downtown and the newly landscaped Arch grounds, creating a lid over highway traffic that visitors once had to deal with.

On the museum’s mezzanine level, a terrazzo floor shows a map of North America with historic trails from St. Louis and the East, allowing visitors to trace pioneers’ journeys to the West. Six themed galleries take visitors through 201 years of history, from the city’s founding by French fur merchant Pierre Laclede in 1764 to the building of the iconic Gateway Arch, completed in 1965. 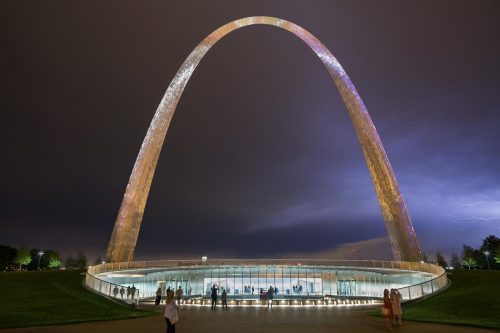 Starting in the Colonial St. Louis gallery, museum-goers learn about trade with the Osage people, who supplied buffalo hides and deerskins in exchange for guns, ammunition and knives. Visitors can sit in a pirogue (dugout canoe), the kind used for travel between St. Louis and Osage villages. A touch screen display sheds light on French culture, with videos on language, music and even a step-by-step demonstration of how to make a pork-and-apple pie.

The Jefferson’s Vision gallery focuses on the $15 million Louisiana Purchase, which doubled the size of the young republic, and Lewis & Clark Expedition. In Manifest Destiny, exhibits focus on the quest to push westward, conflicts with Native peoples and annexation of Texas. “We’re Still Here,” a bank of touch screens playing interviews with Native Americans, reflects contemporary concerns about suicides, diabetes, poverty and the desire to pass on ancestral traditions. 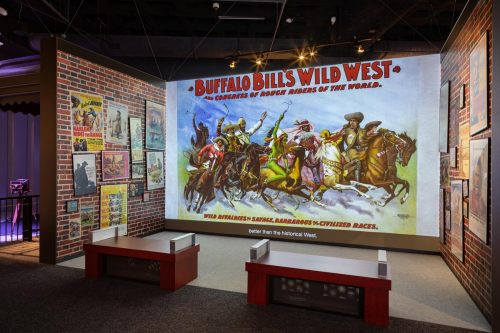 The New Frontiers gallery explores how people settled and lived in the West, the myths that became the West’s cultural legacy, and how industrial innovation and the railroads changed St. Louis and the nation. A large-screen video discusses how Western movies and TV shows have popularized romantic perceptions of the West over the generations. On display are two walls of vintage movie posters, plus Western art by painter Charles Russell and copies of Frederic Remington bronze pieces like The Bronco Buster. The Riverfront Era (1838-1860) gallery has a diorama of the St. Louis riverfront at a time when steamboat traffic made it the third busiest port in America. Also in this gallery are a covered wagon and examples of provisions carried on overland journeys; artifacts include saddle bags, a rifle, rolling pin and wooden trunk.

Next door, the Arch Cafe has burgers, pulled pork, paninis, subs and local specialties like toasted ravioli and St. Louis ribs. Tables are imprinted with historical facts so you can learn while you eat. On the riverboat dock, the Arch View Cafe is open April through October. Boxed lunches for groups are available. 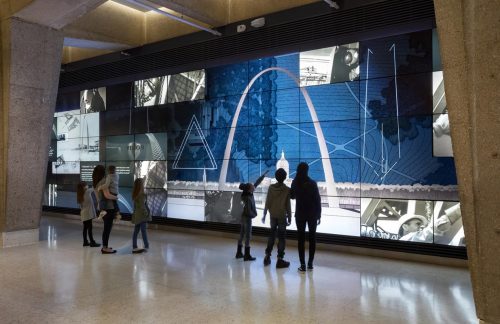 Ticket booths at the underground museum/visitor center sell timed tickets for the tram ride up the Arch, riverboat rides and showings of Monument to the Dream, a 35-minute documentary on the construction of the Gateway Arch, which commemorates the story told in the museum.

The landmark Old Courthouse is free and best known as the site of the Dred Scott trial, in which slaves Dred and Harriet Scott sued for their freedom in 1846. It has exhibits on the case and early St. Louis history.

Just south of the Arch is the Old Cathedral, a Catholic church that dates back to the city’s founding. The first permanent church in St. Louis, it was the only building saved from demolition when riverfront land began to be cleared for the national memorial in the 1930s. Designated Basilica of Saint Louis, King by Pope John XXIII in 1961, the church has a museum (free) and is an active place of worship. Busch Stadium, home of baseball’s St. Louis Cardinals, lies three blocks west.

Visitors can learn more about St. Louis from the 18 historical markers placed throughout the expanded, redeveloped Arch grounds. The park now has twice as many trees.